It seems like only yesterday that Hasbro wowed TransFans the world over with their reveal of the new big boy of the Transformers world. He’s Metroplex and he’s the current record holder as the biggest Transformer ever. Fort Max? LOL… f’ck you!! The moment this guy was revealed, I knew I’d be buying him whatever the cost and he finally landed on my doorstep just last week. I don’t think he needs any further introduction, so let’s dive right in.

As one might expect, Metroplex comes in a giant box. It’s a GIANT box! This is exactly the size and type of box I would see as a wee lad in the aisles of Toys R Us circa 1985. It was exactly the kind of box that would make me realize that I had a lot of shit to make up for if I was going to be good enough to get something this big and cool for Christmas at the end of the year. It is a glorious box. I love how it says “Actual Size” on it, as if to confirm that your eyes are not playing tricks on you… the box really is this big! I don’t think I’ve been this impressed by a toy package’s size and heft since I first held Hasbro’s revised Millennium Falcon or AT-AT Walker. Folks,  I’m looking at this box of giant robot goodness standing on the floor beside me, and I do believe I’m getting aroused. 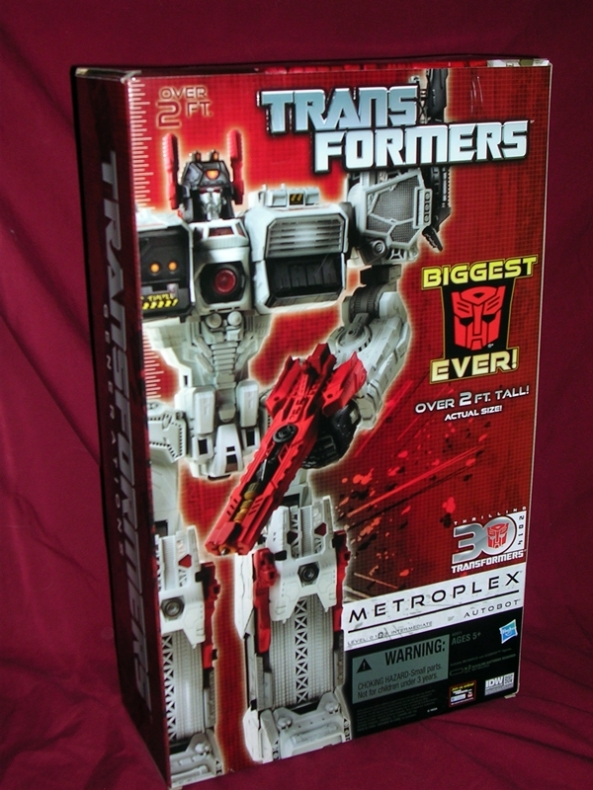 This is no namby-pamby window box. There’s no cozy flap to open up so you can have a window and look at the toy and maybe push a button through a “Try Me” hole. Windows are for pussies! You can look at your toy when you pony up the money, take it home, and open it, otherwise… f’ck off! You want to see the show? Buy a ticket! And a “Try Me” hole will do you no good because you don’t even get any batteries with it. In the 80’s you didn’t get batteries in your toys either. If you got home and there were no batteries lying around the house you were shit out of luck. Oh crap, I really don’t have any batteries… Gimmie those batteries, Xbox controller! 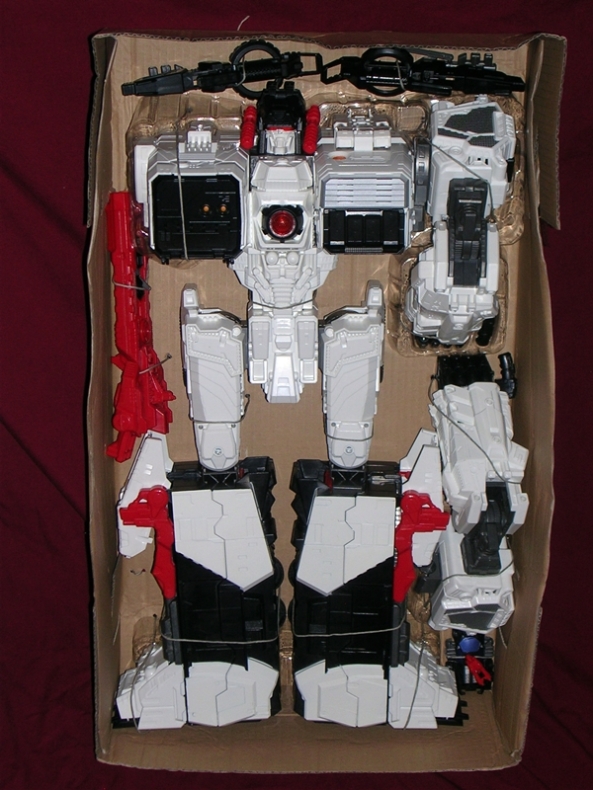 Open up the box and you get a big cardboard tray full of plastic. I kind of wish Hasbro would have used a brick of styrofoam, just for old time sake. There’s also a slab of cardboard holding the large instruction booklet and the equally large set of stickers. STICKERS!!! Metroplex comes mostly assembled and there ain’t a whole lot of spare room in that box. You need to pop on his right arm and his shoulder cannons. Unfortunately, the arm isn’t meant to come off again and with it on he can’t easily go back in the box. I really wish Hasbro had made the box that quarter of an inch wider that it needs to be to hold the assembled figure. I desperately want to keep the box, but if Metro isn’t going back into it, I probably will end up ditching it. Y’all know that I normally, I start out with alt modes, but since Metroplex has two I’m going to take a look at his robot mode first. But before I do that, I need to go off and put some stickers on.

…and an hour or so later I’m finally done. Holy crap, that’s a lot of stickers, although, you can’t tell from his robot mode because the bulk of these are only seen in his alt modes. None of them are terribly tiny, but manipulating this beast to get them in all the right spots while his legs are flopping all over the place got a bit tiresome after a while. 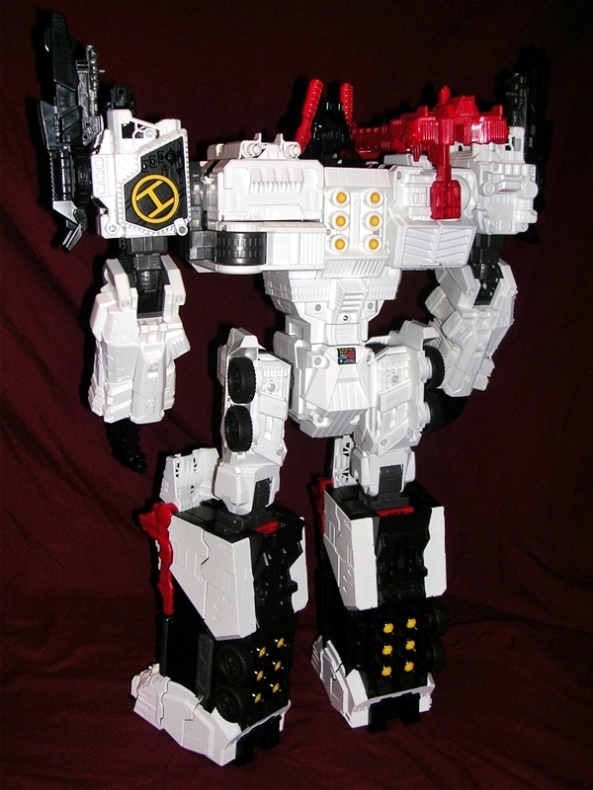 So, besides the obvious (he’s HUGE!) I am really impressed with this guy right out of the gate. Like a lot of people, I was a little concerned about how skinny he was in the middle, but it didn’t turn out to be a big issue for me. He’s a robot. Granted, he’s a humanoid robot, but there’s no reason for him to be bulked out in the middle if he doesn’t need to be. If I were to pick the one thing that I dig most about Metroplex’s robot mode it would be how much Hasbro stuck with the overall original G1 design, and that’s going to be a running theme through this feature. They didn’t reinvent the guy, they just took the original design, spiffed it up a lot and made it bigger and better proportioned. You can run down the checklist of common design elements, from his kneecaps to the boxy twin bays that make up his chest, to the shoulder guns, and the antenna-guns that adorn each side of his head. I wouldn’t even call this guy an homage, he’s more of an update, and an extremely successful one at that.

The deco is mostly white plastic, with some back, grey and red accents. While the toy is loaded with sculpted detail, most of the color comes from the billion stickers that you have to apply and hardly any paint apps. Here’s where I come out and concede that the chrome present on the SDCC version really does a nice job of breaking up the white plastic, so if you were lucky enough to pick up one of those… well, done! I think the only thing that feels off to me about the retail version is the white face, which should have been silver like the exclusive. I don’t even need it to be chromed, just painted silver. Is it a big deal? Not really, but I’m really looking for things to gripe about here.

So, the next thing I dig the most about Mr. Metroplex here is just how much fun he is to play with in robot mode. Metroplex is huge, but he’s no brick. You get a lot of useful articulation with him and some fairly strong joints to back him up. One tends to expect something this big to stand there and look pretty, but I have had just as much fun posing this guy as I have any Deluxe or Voyager. Now, I say “fairly strong joints,” because his hip articulation will give out from time to time. If you give him too wide a stance or don’t balance him right, he will crumble, but it’s the exception rather than the rule. Standing straight up, he’s as solid as they come and while I feel obligated to suggest some stronger ratcheting joints in the hips may have been in order, what we got is still perfectly serviceable and I can get him into plenty of cool poses.

Metroplex has a few nice play features to keep things interesting. First off, he has a huge gun that can mount on his shoulder or be held in his hand. If you got the SDCC version, you got two of them! The gun fits really well in either position and it fires a missile… right into your eyeball if you’re not careful! Seriously, I’m thankful I wear glasses. The head features a drop down red visor as well as moveable eyes. What? Yeah, I was pretty surprised too! There’s a lever on the back of his head that will move his eyes from side to side. You can, however, only see the effect when the electronics are active. 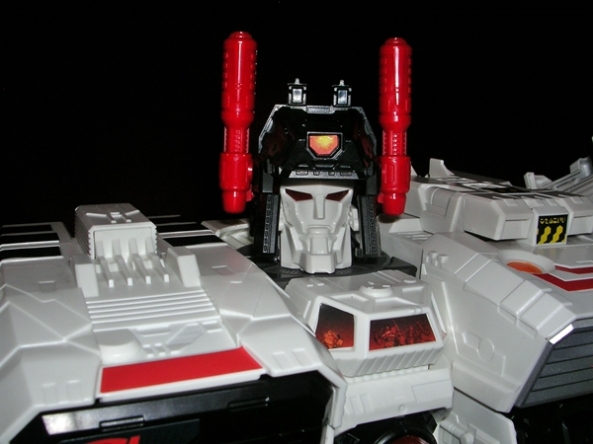 Yes, what giant toy would be complete without electronic gimmickry? Push the top of Metroplex’s chest down and his chest and eyes light up and the SFX will sound off. The sound clips alternate between sound effects and speech. Here’s what the big guy has to say…

“Metroplex heeds the call of the last Prime.” 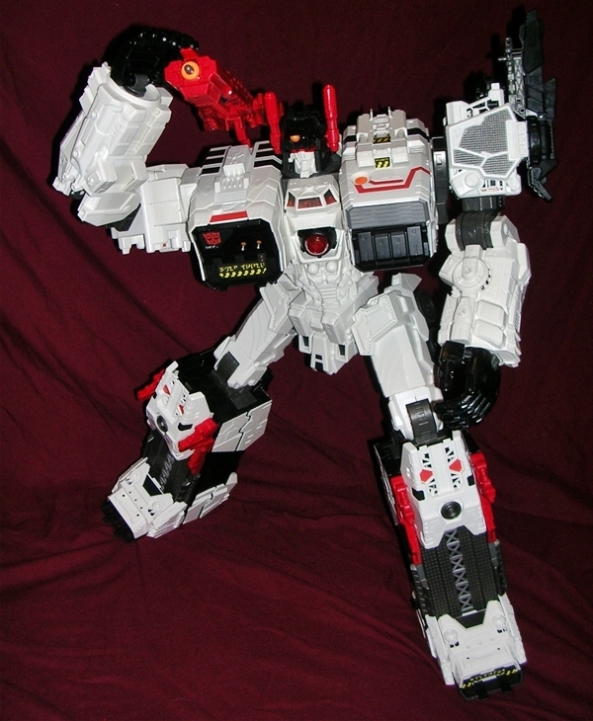 So how about that articulation? His arms feature shoulders that rotate and have lateral movement, hinges and swivels in the elbows, swivels in the wrists, and individually articulated fingers. His legs have hips that rotate and feature lateral movement and hinged knees with swivels. Metroplex can also swivel at the waist and rotate his head. There’s enough articulation here to make him fun to play with, but not enough to make him fragile or terribly unstable. It’s a thing of beauty! 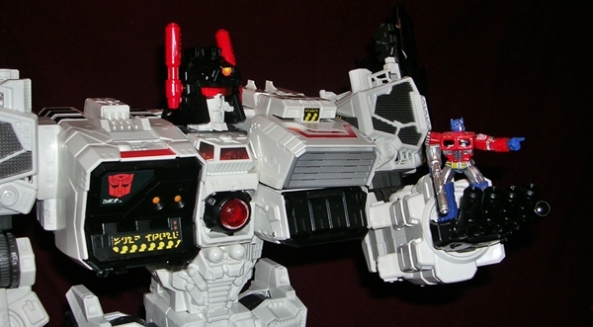 Ok, I feel like I’ve gone really long here, so I’m going to break and come back tomorrow when we will look at Metroplex’s chum, Scamper, and then check out the big guy’s City Mode! Oh yeah, and if you’re wondering how he stacks up to Mattel’s giant Voltron… 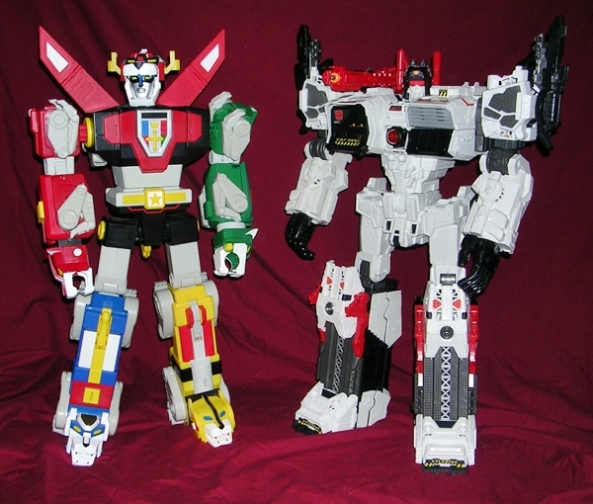 Yup, right about the same height.