If you came here looking for convertobots, I’m sorry to say that Transformers Thursday has been bumped this week so that I can look at some new Star Wars toys. In fact, I’m already hip-deep in the initial offering of 6-inch Black Rogue One figures. Yesterday, I checked out Jyn Erso and Cassian Andor, today I’m looking at the new breed of Stormtrooper in town… The Death Trooper! 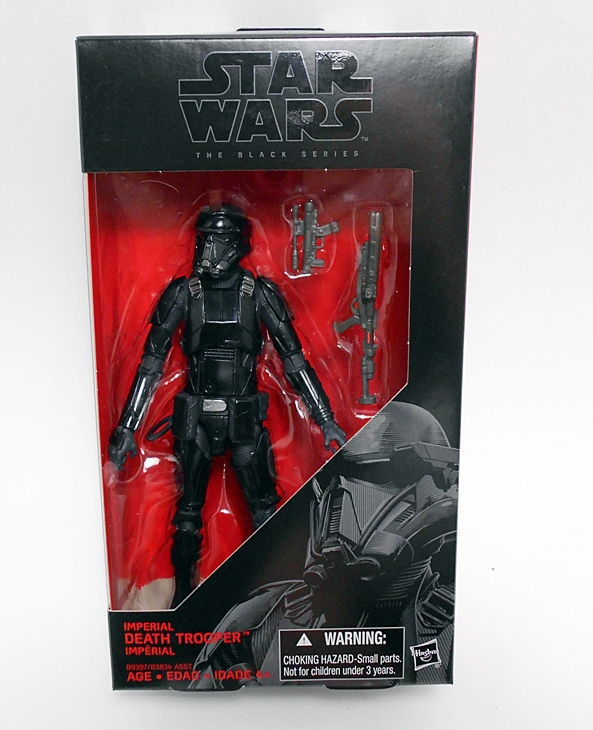 There’s nothing new to say about the package itself. It’s red and black, handsome in a minimalist way, and collector friendly. The blurb on the back is a little more educational on this figure, declaring these Death Troopers to be the elite soldiers of the Imperial Intelligence. They’re also bodyguards and enforcers for Director Krennic. Cool! Let’s open him up and check him out! 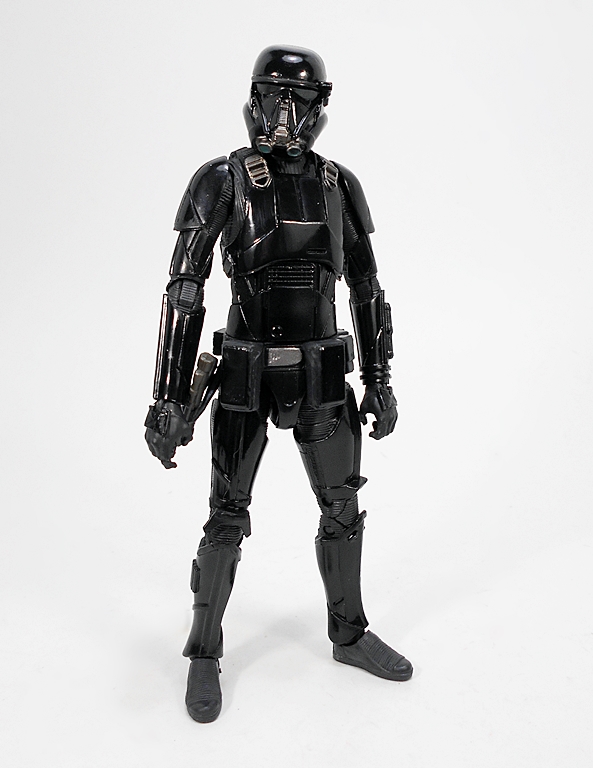 Call them Shadow Troopers, Stealth Troopers, or Black Hole Troopers, but black armored Stormtroopers have been floating around the Expanded Universe for a while. This guy, however, comes with a brand new suit of armor. There’s definitely plenty of homages here to the original Stormy, like the “O II” pattern on the backpack, but overall the design is still pretty fresh. The first thing I noticed when playing around with this figure is how much lankier he is when compared to the standard variety Stormy. His arms and legs are a bit thinner and when you factor in how black is a slimming color, there just feels like less bulk here. As a result he looks more creepy than intimidating. 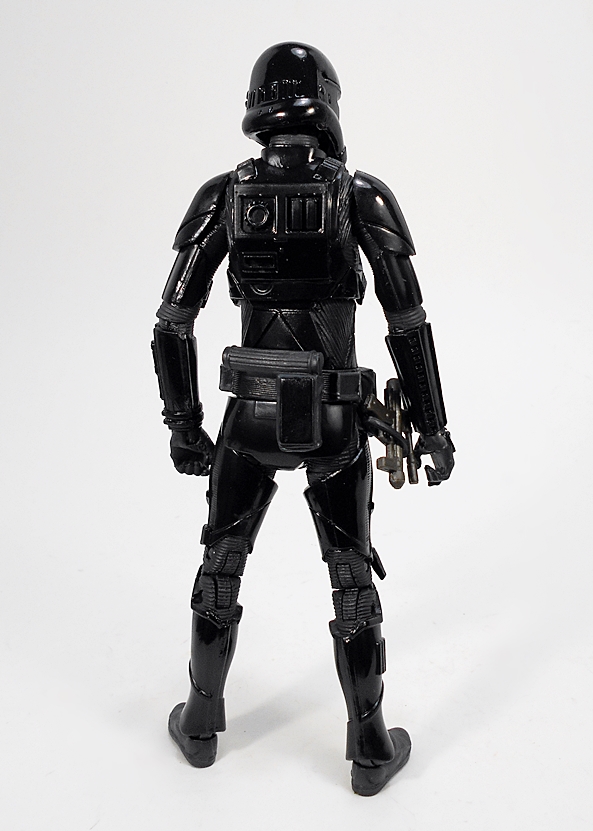 And for a figure that is mostly black, Hasbro has done a nice job creating what actually looks like convincing armor. Sure it’s all one buck, but the underlying body suit stands apart from the armor pieces thanks to the use of both matte and gloss paint. The body suit is also heavily textured and ribbed so it contrasts nicely with the sleek and shiny armor. There’s a little bit of gray paint used on the shoulder strap buckles and the belt buckle, but apart from that, this is a very dark and grim looking fellow. 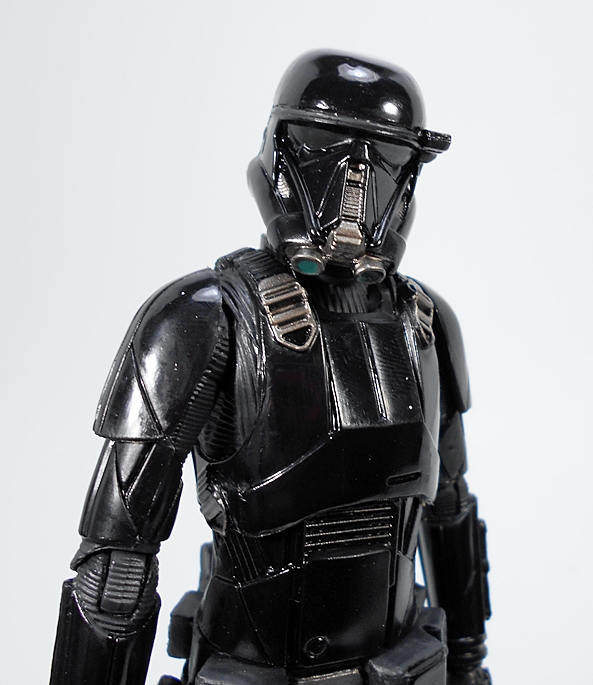 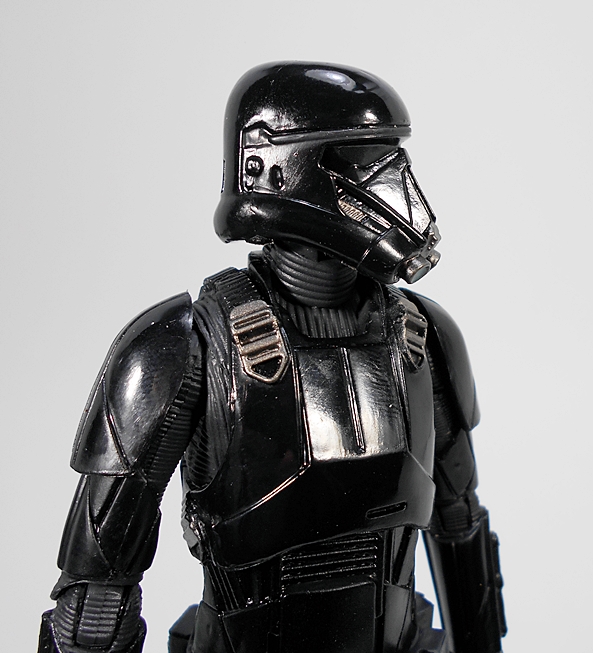 As for the helmet… I like it, but I’m not in love with it. It looks a little too kit-bashy for me, like they morphed a Stormtrooper, Scout Trooper, and First Order Stormtrooper together and then added something that looks a little like Boba Fett’s range finder on the left hand side. There’s a good chance I’ll learn to love it once I see these helmeted hooligans in action, but I’m willing to be a lot more forgiving since they’ll be sharing the screen with the original Stormtroopers and not replacing them. 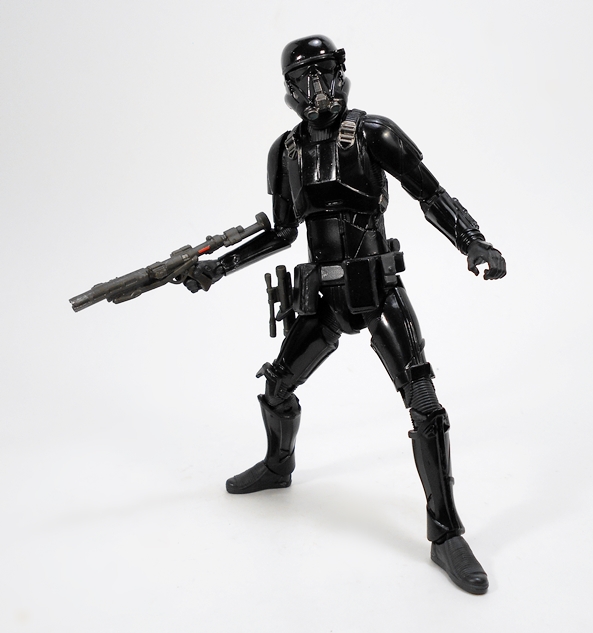 The articulation is similar to what we got with the other 6-inch Black Stormies. The shoulders have rotating hinges, and the shoulder plates are soft plastic so they will bend to allow for a better range of motion than one might expect. The elbows and wrists also both feature rotating hinges. The legs are ball jointed at the hips and have double hinges in the knees. There’s are swivel cuts up in the thighs and the ankles have both hinges and lateral rockers. You get a ball joint in the chest and both a ball joint and hinge in the neck. 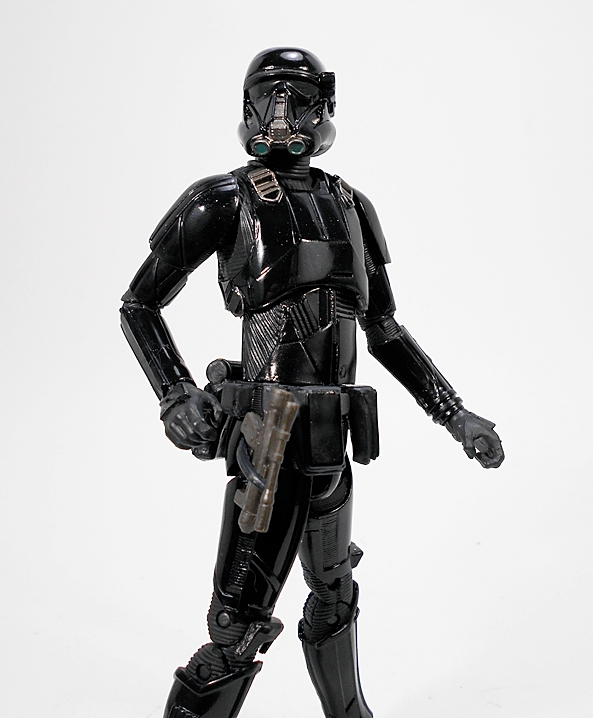 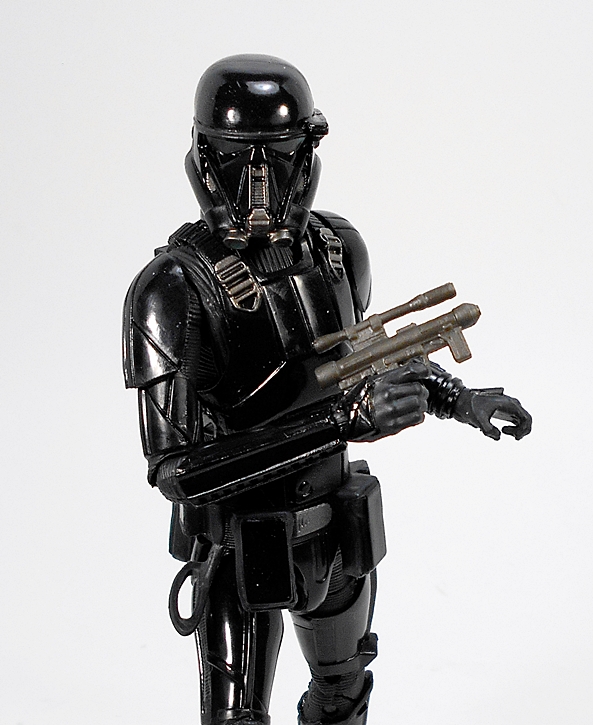 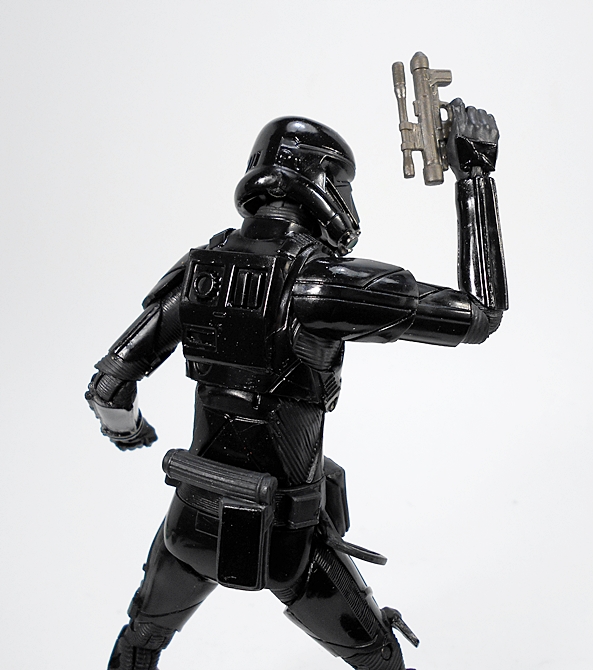 The Death Trooper comes with two weapons. The first is a blaster pistol that fits in a little loop on the right hip. I was taxing my brain trying to remember what this pistol and loop reminded me of and then it came to me. The designs are very similar to what we saw on the Nostromo Compression Suited figures from NECA’s Alien line. Check it out HERE. It’s not a very Star Wars-y looking gun design to me, but it’s alright. I still wouldn’t want to be caught in a quick-draw scenario with that thing. It looks like it would be rather prone to getting caught on the loop. 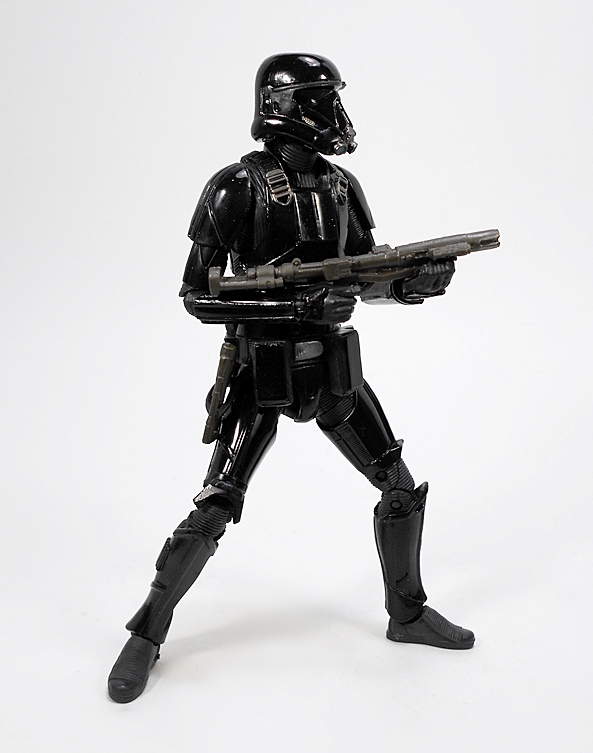 The other gun is a carbine, which is more in line with what I expect to see a Stormtrooper carrying. It’s a new design, but it reminds me a little of the British Sten Gun, which saw service during WWII, minus the long side magazine. And that’s probably why I like it so much, because so many of the guns in the original films were kit-bashed from WWI or WWII weapons. 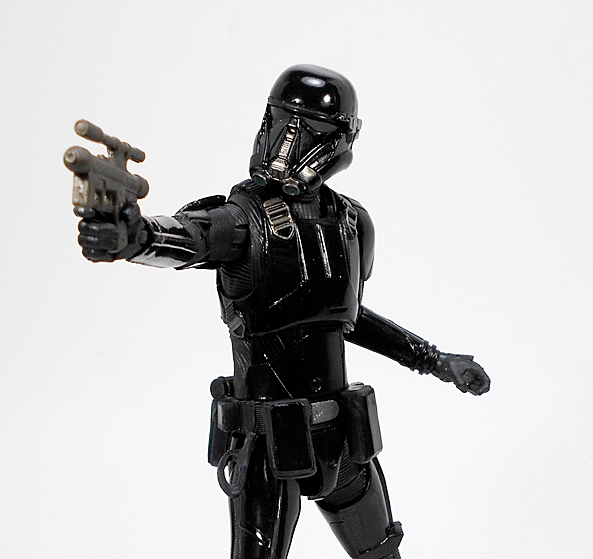 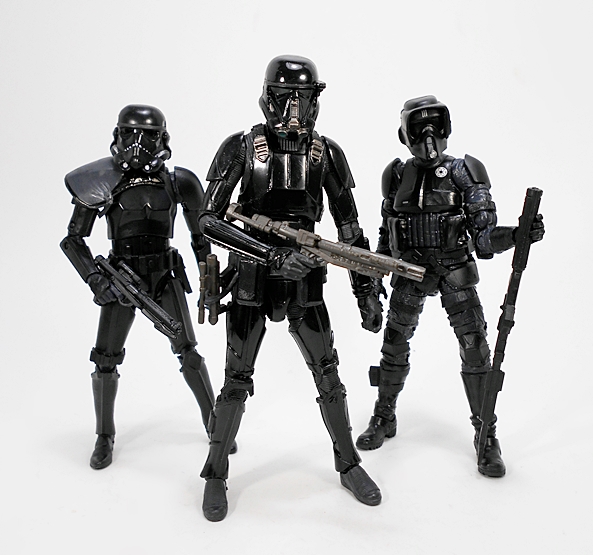 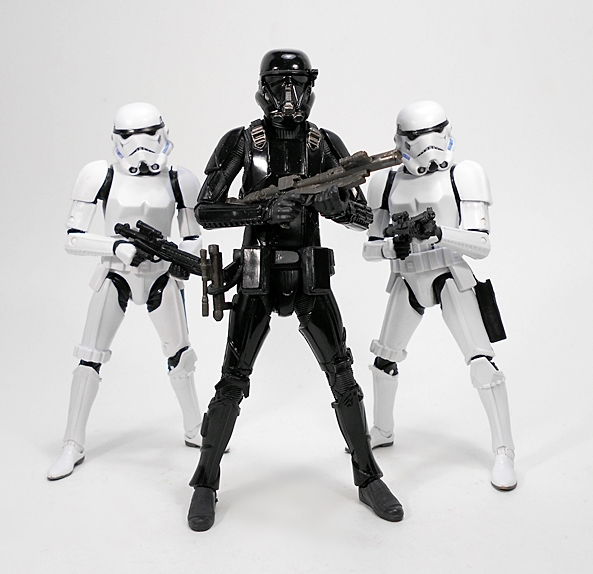 If I wasn’t already sold on this movie, all the new Imperial troop designs would certainly have swayed me. And so it should come as no surprise that I really love this figure. It’s a cool new design and I am super excited to see these guys in action on the big screen along with the other new trooper designs. Once things calm down a bit, I’m hoping to pick up at least a couple more of these black beauties. And a special thanks to The Empires Elite for making me realize how great the Death Trooper looks with the Shadow Squadron troopers, because I totally stole the idea of that group shot from that blog.

Tomorrow, I’ll be back to wrap up this quartet of Rogue One figures with K-2SO!