I was all ready to open up another Kantai Collection Figma for this week’s Anime Saturday, but then I thought, “why not serve up a little variety and do something else.” How about some Pop! Vinyls! Yes, folks, while I don’t buy a whole lot of these, the truth is I’m still part of the problem, even if just marginally so. But at least I can still say I’m very choosy about the ones I buy, and those purchases are often targeted at franchises that haven’t been properly exploited in plastic. Apart from a couple Play Arts Kai figures, there’s a bewildering lack of merchandising around Cowboy Bebop. I don’t get this. I mean, seriously? Still no Figmas or Figuarts for the Bebop crew? I get that the love affair with this series has waned in recent years. As always, the more the Internet adores something, the more they will turn on it later on, and I feel that’s set in vis-a-vis Bebop. But to me, Cowboy Bebop belongs among the classic anime that it borrows from. And, as usual, Funko has stepped in to fill the plastic void with some of their goddamn Pop!s. 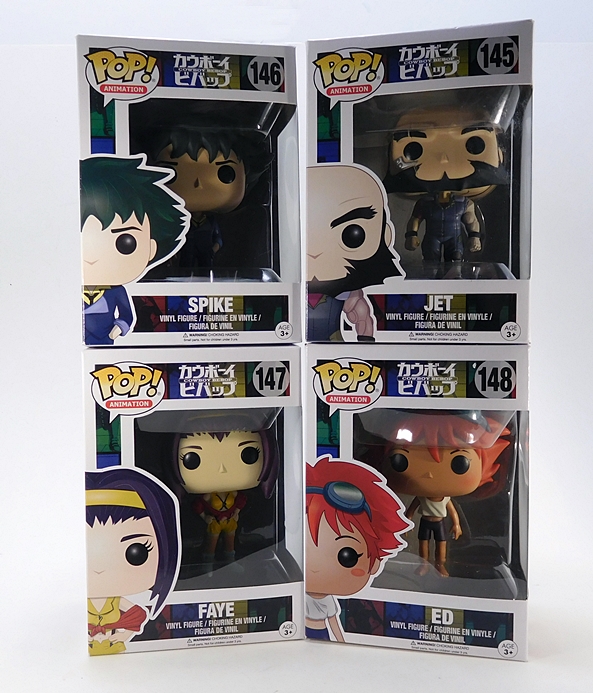 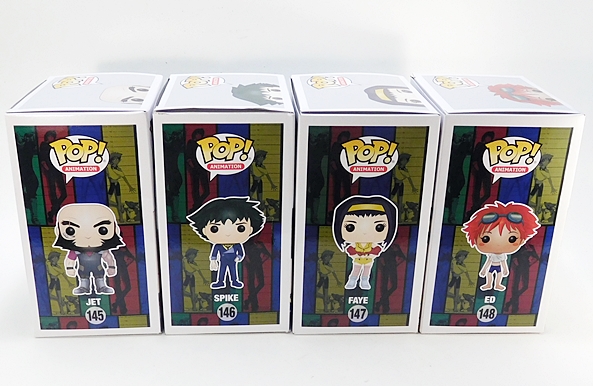 Today I’m looking at all four of the current BePop! offerings, numbers 145 to #148 in the Pop! Animation Series if you’re keeping track. They originally showed off some concept art for Ein a while back, but I haven’t seen him actually make it to vinyl yet. As for the packaging, these all come in standard Pop! window boxes. If you’ve seen one, you’ve seen them all. There’s a pyramid of these things at the local Barnes & Noble. I think they have more Pop!s than books now. Anyway, let’s run through these, starting with Spike Spiegal.

This is a great likeness for a Pop!, and there’s no doubt about who he’s supposed to be. I love the way the head cocks to the side ever so slightly and they really nailed his Dylan-esque mop of hair. The body is not as lanky as it should be, but let’s face it, one doesn’t buy Pop!s looking for accurate proportions. They did a great job on his blue futuristic leisure suit, complete with yellow shirt and loose tie. He’s even got a cigarette burning in his right hand. The paint quality on this one is excellent, with pretty clean lines and not much slop to speak about. While he doesn’t really need it, Spike comes with a clear disc stand to help keep him from toppling over. Five out of five Woolongs.

Jet Black is also unmistakable to me in this Pop! form. Of course, his portrait is a lot more distinctive than Spike’s, thanks to his cyborg implant and unique choice of facial hair. They even sculpted in the scar that runs down the right side of his face. Unfortunately, they didn’t line up the break in his eyebrow paint to match it, but it doesn’t bother me that much. The rest of the paint is really good, especially the emblem printed on the back of his jacket. Jet is the only one in the lineup that doesn’t come with a stand, nor does he have peg holes in his feet, but he stands just fine on his own. Even if I take a little something away for the botched scar paint, he still gets four out of five servings of Bell Peppers and Beef. Tasty!

Faye Valentine is another very distinctive looking character that translates really well to Pop! form. With her purple hair and yellow hairband, I think I would probably know who this was even if you just handed me her head. The outfit is also created down to the last details of her mid-riff crossing suspenders and thigh-high stockings. I even like the way she’s standing with her hands on her hips and her weight shifted slightly to one side. The paint here is pretty damn good too! The yellow sure is flashy, and I like the mix of gloss and matte finishes. No complaints here, five out of five regurgitated poker chips.

And that brings us to Edward, and another direct hit for this series. Funko had a lot to work with here when it comes to the portrait. The blush on her cheeks is well executed, the hair is great, and the goggles that she wears up on her head actually feature translucent tinted green lenses. She has the simplest outfit among all of them, but it still hits all the right points. The plastic used for her skin tone is a little too shiny for my taste, but I’m not even going to take any points off for that. Five out of Five super-intelligent corgi pups. Arf!!!

What I really enjoy about this set of Pop! Vinyls is that it not only fills the Cowboy Bebop shaped void in my collection, but it’s an easy in and out. Funko may make more of these, we may eventually get that Ein or maybe a Vicious or a Julia, but I don’t need them, because the core of the show’s cast is right here and ready to go up on my shelf. And the beautiful thing about Pop!s is that I rarely ever have to pay full price for them. Someone is almost always doing some kind of deal to chip away at the piles of these on retail shelves. In this case, I got in on a BOGO, so these basically only set me back a fiver each. Not bad at all. And that’s it for today’s Anime Saturday. I think it’s time I blow this scene. Get everybody and the stuff together. Ok. 3. 2. 1. Let’s jam. dundundundundundundundun duuuuuuuuuuuun …