I’m back after a short Christmas break and trying to wrap up a couple of loose ends before the year turns over and I take a week off and run my insufferable end of the year Favorites/Disappointments lists. I hope everyone had a great Holiday. Mine was spent with family, great food, some lovely adult beverages, and some pretty cool gifts, including the little fella I’m looking at today: Power of the Primes Legends Class Windcharger. I should note that I’m a big Windcharger fan. I can still remember getting my G1 Windcharger at Sears one day while my Dad was having the car serviced. I sat in the waiting room having all kinds of adventures with this little guy and we’ve been best buds ever since. 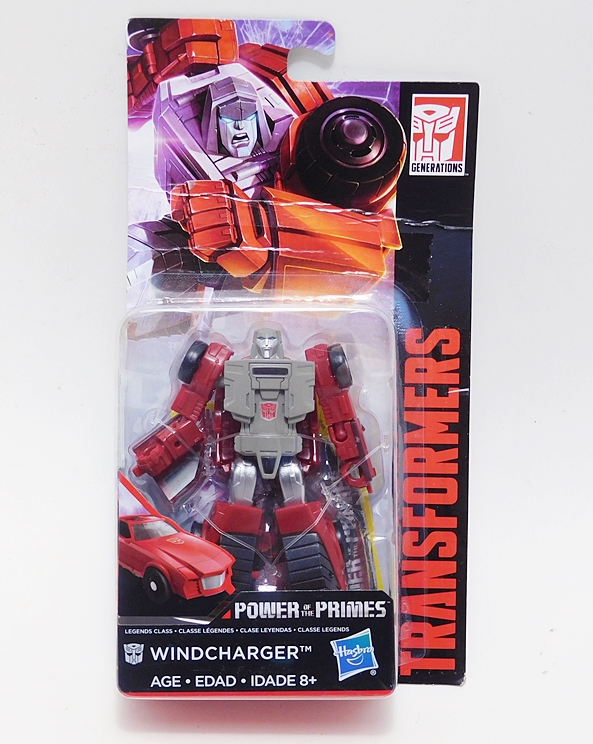 It seemed like Hasbro forgot this guy even existed for the longest while and then decided to make up for lost time. They put out a pretty cool version of him back in 2011 as part of the Reveal The Shield series. Then we got a pretty shitty version of him back in 2015 as part of the Combiner Wars line. I’d complain about getting another one so soon, but since I missed out on the 2011 version and only have the crappy 2015 release, I’m really jonesing for a Windcharger that I can put on my shelf with pride. Let’s find out if this one is it. And we’ll start with his auto mode!

This is a fine update to the original toy’s car mode. Windcharger is a spiffy little red sports car that bears a pretty strong resemblance to a Trans Am. This version is a lot less super-deformed than the original toy, and the wheels have been scaled back a bit, although these still look pretty beefy. The windshield and sunroof panels are tinted plastic and the side windows are painted black, and the rear window is sculpted to look like a louver, just like the original toy. The rest of the coloring is achieved through the red plastic and a little silver paint on the front and rear bumpers. He also has a crisp Autobot emblem printed on his hood. Windcharger can be a little finicky when it comes to lining up all his panels just right, but he holds together pretty well and looks great.

Surprisingly, Windcharger follows in the tradition of Titans Return by having a driver seat for either a Titan or Prime Master figure, although it is a little more difficult to get to. You have to unpeg the back portion of the car and hinge the whole thing up to reveal the driver’s compartment and pop in the figure. 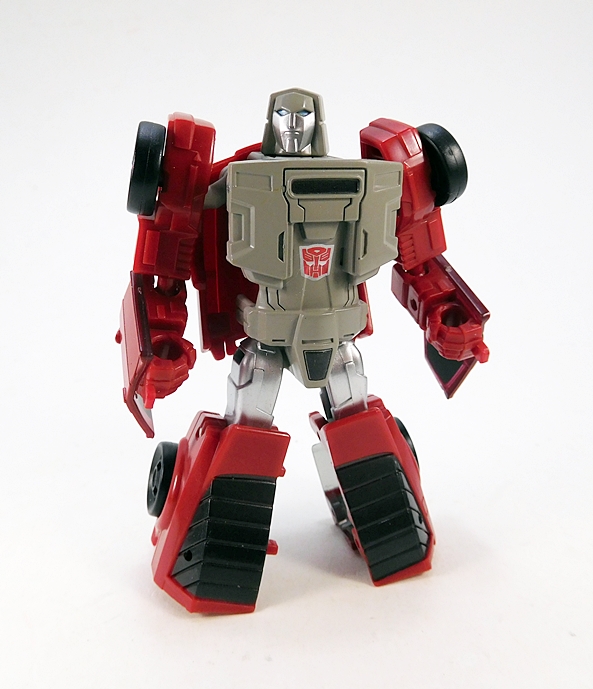 Transformation is a wee bit more complex than the original G1 Minibot, but in it’s similar in spirit. The legs still unfold from the back, the arms come out from the sides, and the head and chest are hidden in the undercarriage. The result is a robot that looks like a proper homage to his G1 namesake and captures all the little simple fun of that toy. All respects have been paid in the design, with obvious call backs being the sculpt of the chest and the split louver on the front legs. The deco retains the black and red of the car mode, but adds silver to his upper legs and the gray plastic for his chest.

He’s pretty solid from the back too. His upper back is just a big slab of car hood, and the windshield pieces fold up to help cover up his hollow leg syndrome. OK, so it doesn’t help all that much, but it does make his lower legs a little more solid. Apart from the car door armor that he sports on his forearms, there isn’t a whole lot of kibble here, and that’s impressive. Indeed, the only nitpick I have here is his legs look a little squat compared to his upper body. It would have been really cool if they could have found a way for his legs to unfold just a little bit more, or maybe just give him feet. He just needs a tiny bit more leg to make him look properly proportional.

I’ve heard some grumblings from collectors over Windcharger’s face, but I really can’t find a lot of fault in it. OK, so his pursed lips kind of make him look like the Disappointed Dachshund, but otherwise I think it looks fine. I like that they retained his diamond shaped eyes and boxy head frame that he had in the Sunbow Cartoon, and let’s face it, at least he has a face. That’s more than the original toy could say. The silver paint is spiffy too. 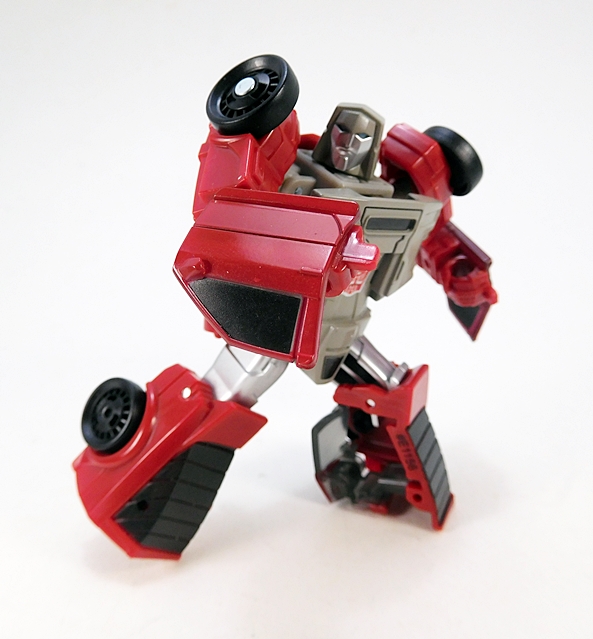 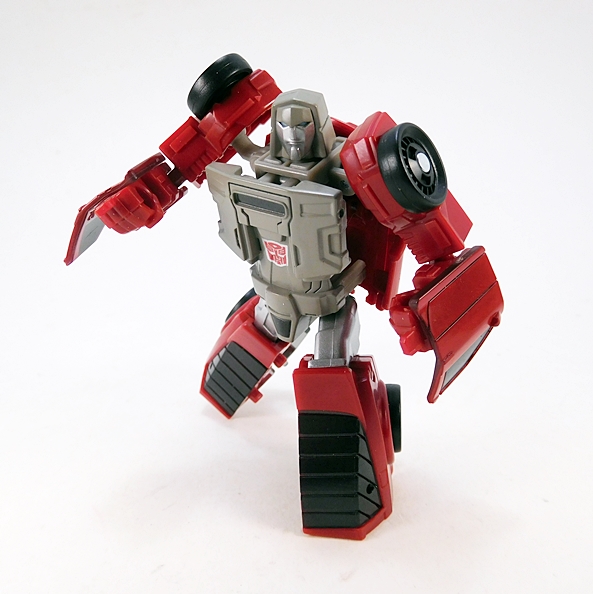 Windcharger’s articulation makes him pretty fun and poseable. He’s got ball joints in his shoulders, elbows, and hips, hinges in the knees, and his head can swivel. I will throw out there that I really wish Hasbro would start giving the Legend Class figures some guns. At ten bucks a pop, I don’t think tossing a generic pistol in there would really break the bank.

I’m pleased to say that Power of the Primes Windcharger is just a couple of longer legs away from being perfect in my book. And even with what he lacks in perfect proportionality, he makes up for everywhere else. He’s a great homage to the original toy with some great call backs to the classic animated design. I also think he’s the best updated Windcharger we’ve every had. Yeah, the Reveal The Shield version is a great figure, but the robot mode strays too far from the G1 design to make the homage really work for me. This is the little bot I fell in love with all those years ago at a Sears Auto Department and it’s good to have him again and be able to retire the Combiner Wars version. I’ll be back tomorrow with not only the last DC Friday of the year, but the last review of the year, period!