Here I go once again, assuaging the hurt of Monday by opening up a new Marvel Legends action figure in a little thing that I like to call Marvel Monday. Also… I saw Black Panther last Thursday and it was amazing and I wish I was talking about that wave of figures, but rules are rules and I have to finish going through this wave before moving on to another. ARGGGGHHHH! 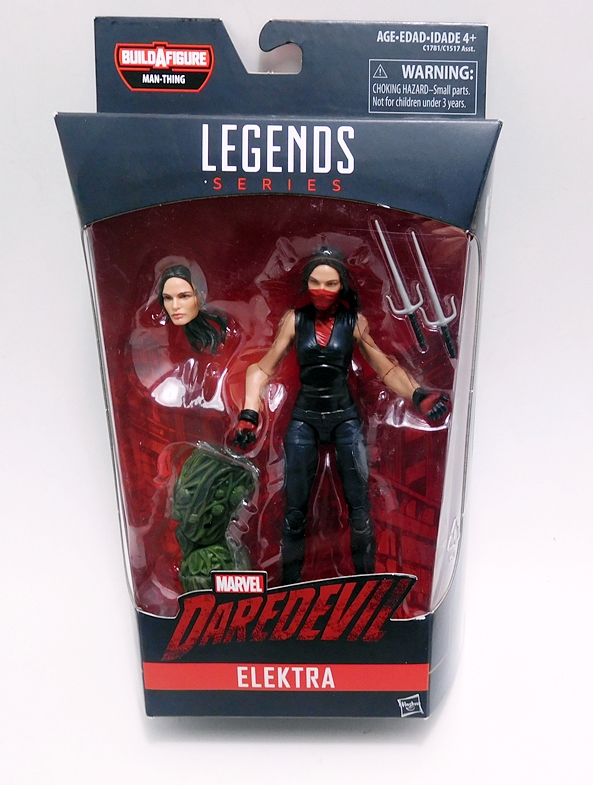 Sorry, Elektra, I’m not intentionally downplaying how amazing it is that we’re getting Legends figures based on the various Netflix MCU series, but that’s the conundrum with Marvel these days. So many great movies, so many great figures, so many great characters, so many great comics! Oh, wait. Scratch that last one. The current crop of Marvel comics are still garbage books largely written by hacks, but I have hopes that Marvel will turn that around eventually. Until then at least we have the movies and toys and a HUGE backlog of older and better comics! Anyway, let’s check out the last of the Netflix figures in this wave… Elektra! 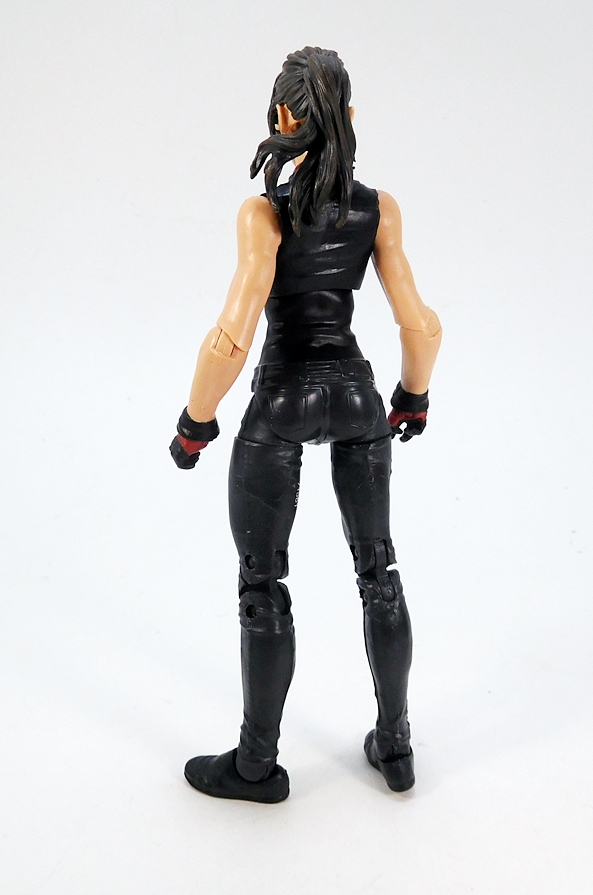 This is Elektra as she appeared in Daredevil Season 2, which is a perfect place to start, because I felt she began to overstay her welcome a bit in The Defenders. But that’s a discussion for another day. Elektra here is a pretty fab example of a figure with some simple sculpting and paintwork that still gets the job done. I’m pretty sure the pelvis and abs are recycled from Jessica Jones, and if that’s the case it works just fine. You get the same sculpted pockets, belt loops, and a painted button in the front. The new upper body features a V-neck vest revealing a sculpted red turtleneck underneath it. Her bare arms are a tad lumpy. I get the sense they were avoiding the super skinny female arms they usually do and tried to give her some muscles. It looks OK at some angles, but from others, those elbows look kind of strange. Her outfit is capped off by a pair of red and black sculpted gloves. Again, it’s a simple buck with simple coloring, but I think she looks great.

Elektra features two heads, one masked and one un-masked, and both are pretty good likenesses to the lovely Élodie Yung. Although, it should be noted that this new face printing thing that Hasbro is doing looks fantastic with the figure in hand, but is not terribly flattering when you get up close with the camera. Also, Elektra avoids the ugly seam that Jessica has running down the middle of her neck. Thank God for that! 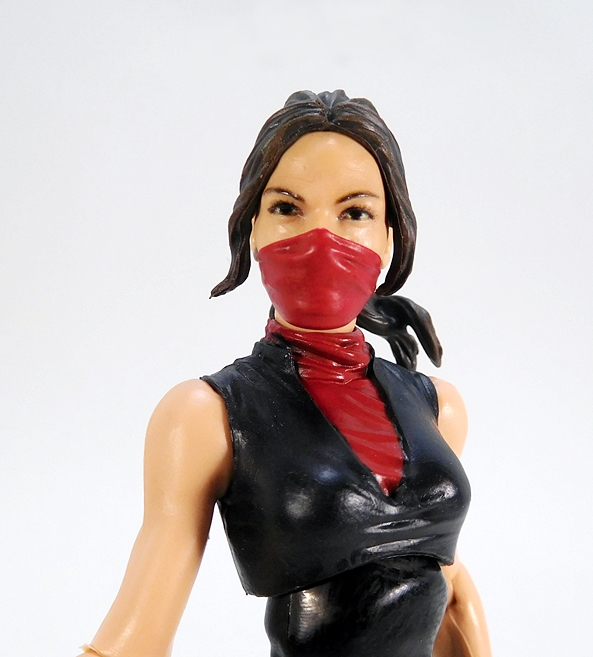 The masked head is probably my favorite of the two, mainly because the likeness is impressive enough to still be recognizable even when half her face is covered. It’s all in the eyes! My only nitpick here is that I seem to recall her mask just being her collar pulled up to hide the bottom half of her face. That’s obviously not the case here, but I’m not going to let that bother me. The hair sculpt seems more or less identical on either head, and that’s not a bad thing because it’s quite well done. 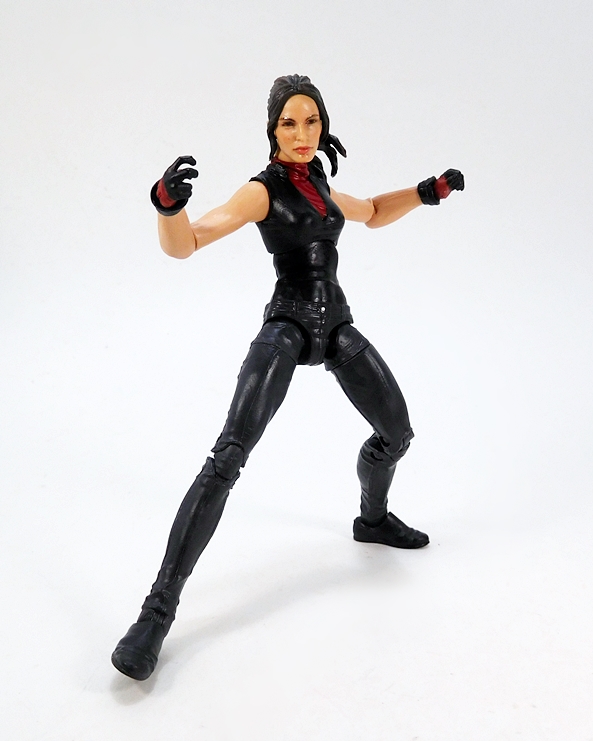 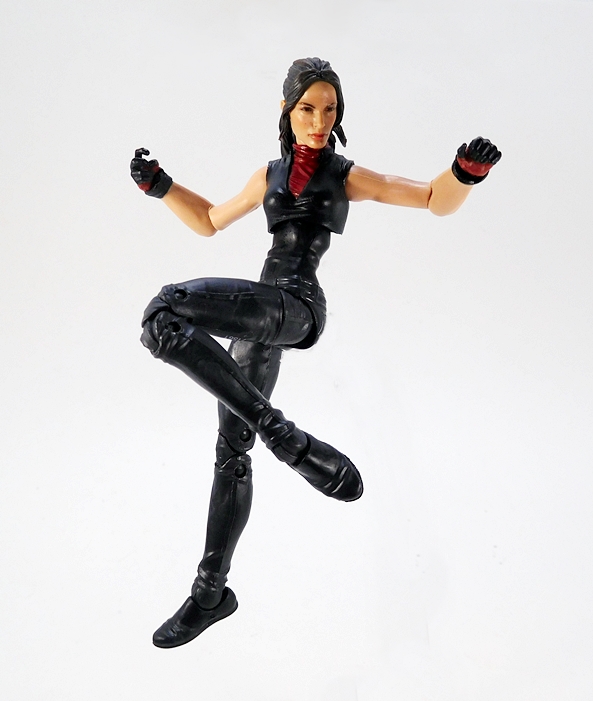 Obviously, Elektra is a figure that needs to be super-articulated, and while what’s here is good, I would have liked some changes. From the waist down, it’s all good. She has ball jointed hips, swivels in the thighs, double hinges in the knees, and rockers and hinges in the ankles. A waist swivel would have been nice, but at least she has the ball joint under her chest, and her neck is both hinged and ball jointed. It’s the arms where I take some issue. She’s got rotating hinges in the shoulders, elbows, and wrists, which seems to be pretty typical for the Marvel Legends ladies. I think bicep swivels and double hinges in the elbows would have gone a long way to make Elektra a little more flexible. With that having been said, she’s still plenty of fun to play with.

Elektra comes with her trademark Sai, which the series teased us with for I can’t remember how many episodes, before finally putting them into her hands. These are simple, but cool looking, weapons with a gray finish and black painted grips. She can hold them in either hand, but I really dig how her right hand is sculpted so you can pass the blade through her grip and have the fingers hooked over the guard. It’s a beautiful little touch that goes a long way.

I think Hasbro did a nice job with this figure, even if there are a few things I would have done differently with the articulation. She isn’t likely to blow anyone away with complexity of sculpt or paint, but what’s here is damn solid. A beefier selection of weapons would have been cool, or even an extra set of hands, but I have to imagine that actor licensing on the MCU figures cut into the costs for extras, so I won’t complain too much. Nor should I, because not too long ago I would have bet against us getting any Marvel Legends from the Netflix series and now we have four! I hope this little assortment isn’t the end, although I couldn’t help but notice Hasbro didn’t show off any more Netflix figures at Toy Fair this past weekend. But did you see those 10 Year Anniversary MCU figures! Holy hell, they look great!

Next time I’ll start dipping into the comic-based figures in this wave.