Hello, fellow Toycoholics! It’s Marvel Monday again, and while I had planned to keep pressing on with the Strong Guy Wave this week, a new version of The Mad Titan arrived and I thought I had better give the big guy priority. In other words, I’m just really excited to open him up! Obviously Thanos needs no introduction, and I believe this is the third comic version of him to hit the modern Marvel Legends line, with the first one being a Build-A-Figure from a wave released around 2015. That figure was later re-issued with some tweaks and extra bits as a Walmart Exclusive Deluxe, and now we get what is essentially a new figure. I skipped out on the second release, because it was so similar to one I already had, but this one looked too good to resist. 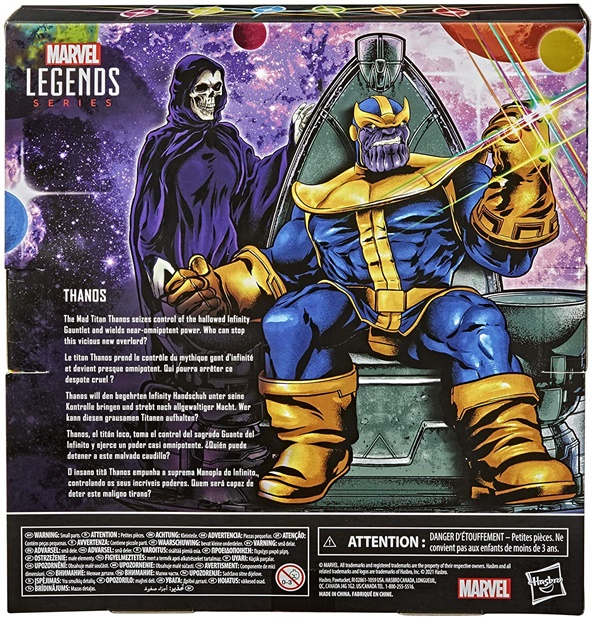 The packaging is certainly nice! So nice, I may be tempted to keep it. You get a fairly large window box with The Infinity Gauntlet title plastered on the front, the Infinity Stones spread across the top panel, and some fantastic character art on the back and side panels. There’s even an illustrated cardboard backer behind the tray depicting Thanos’ throne, although there’s so much plastic crammed into this box, it’s hard to make it out until you open it. Since I already reviewed the BAF version of Thanos, I’ll focus on doing some comparisons throughout. So let’s open this baby up, and make it snappy!

So, straightaway, this is a much cleaner and more classic look for Thanos than the previous ones, and I dig that a lot. He’s roughly the same height as the 2015 BAF, but he comes off as being a wee bit chunkier to me, a lot of which has to do with the hands and feet. The body is more rounded and organic than the sharper and more angular buck of the previous release. BAF Thanos looked like he was wearing some kind of cybernetic armor. Here, he’s just got a tunic and body suit, which is a lighter and more vibrant shade of blue. Gone are all those techno bits, and what detail there is consists mostly in his ripped musculature. Here, Thanos is wearing a some beefy and shiny gold boots and gloves, as opposed to the duller wrist bracers and ankle cuffs on BAF Thanos. Instead of the dull techno girdle on the previous release, here he as some gold trim on his tunic, as well as a plain and simple gold belt and a gold stripe running up the middle of his tunic. 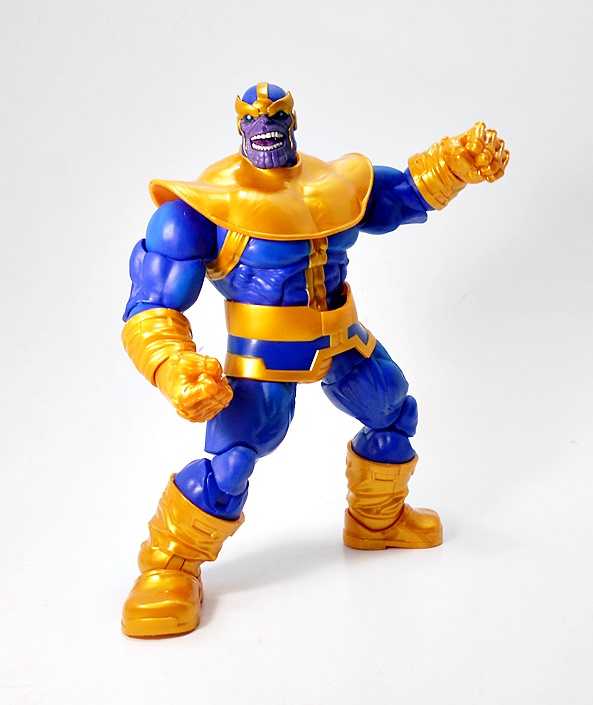 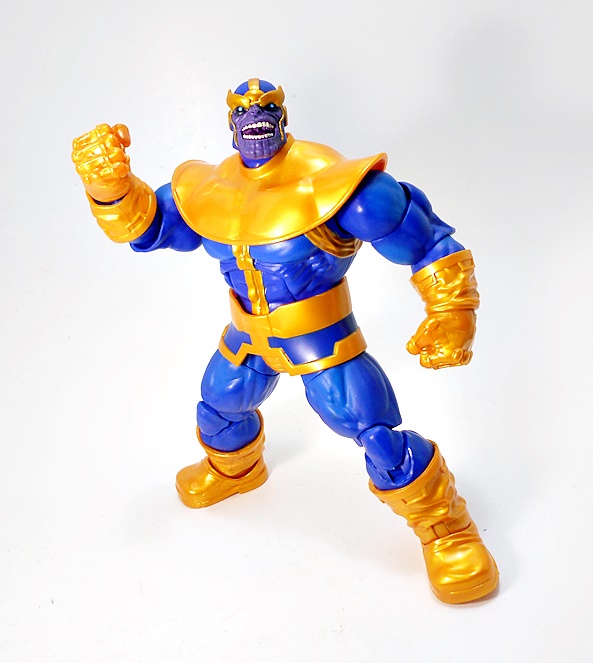 Thanos’ golden gorget has a bit of a swirly pattern in the plastic and is sculpted to match the musculature in the buck. It’s more tight fitting around the neck and it stays in place, as opposed to the BAF’s which tended to flop all over the place. I really dig the painted gold straps that run under the arms. In addition to the simpler, cleaner look on this figure, I just can’t say enough things about the coloring on this figure. The lighter blue and the shinier gold really make the figure pop beautifully, like he’s jumping right out of a comic panel, as opposed to the dark blue and dull matte gold on the BAF. This is just an absolutely gorgeous figure!

The head that comes on the figure features a very similar helmet to the older BAF. The ear discs are a little bigger, there are some other minor variations in the brow ridges, but overall they’re a pretty close match. The paint on my figure’s head could be neater, particularly where the gold is concerned. It’s not something that’s too noticeable with the naked eye when and the figure in hand, but it becomes quite apparent in close up shots.  The portrait itself is excellent, with a slightly darker purple skin and plenty of crags and lines in the face. Here, Thanos’ mouth is agape, but he’s still showing plenty of teeth. He’s got a turnip nose, and black pits for eyes with tiny bright blue irises, that almost glow under the right light. Here, I’m a little less inclined to call the newer version an absolute winner, as I still really like the previous portrait. I’ll call it a toss up. If you are after swapping the heads, I find that it’s not a very good fit, but you can probably make it work, more or less.

You also get the optional King Thanos head, which is a pretty cool bonus, but not one that I’m likely to display him with. I really dig the high crown and it looks fantastic when matched with the gold gorget. This future Thanos’ face is a little more craggy and gnarled, and he offers a broad smile with just a narrow slit of teeth visible. The beard is the real showpiece here. The sculpted white hair looks amazing, as it snakes downward toward the middle of his chest. I’d like to pick up a pack of those NECA head stands so I can at least display this noggin beside the figure. 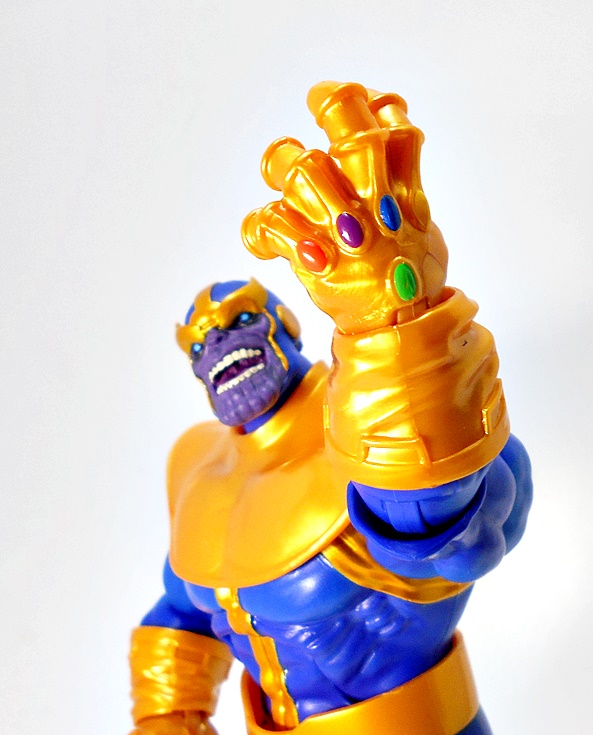 My biggest complaint about the previous BAF Thanos was that it didn’t come with an Infinity Gauntlet, but we get two versions of it with this figure, and that’s awesome! One is sculpted as a grasping hand, and the other is poised to make the snap that was heard around the Universe. 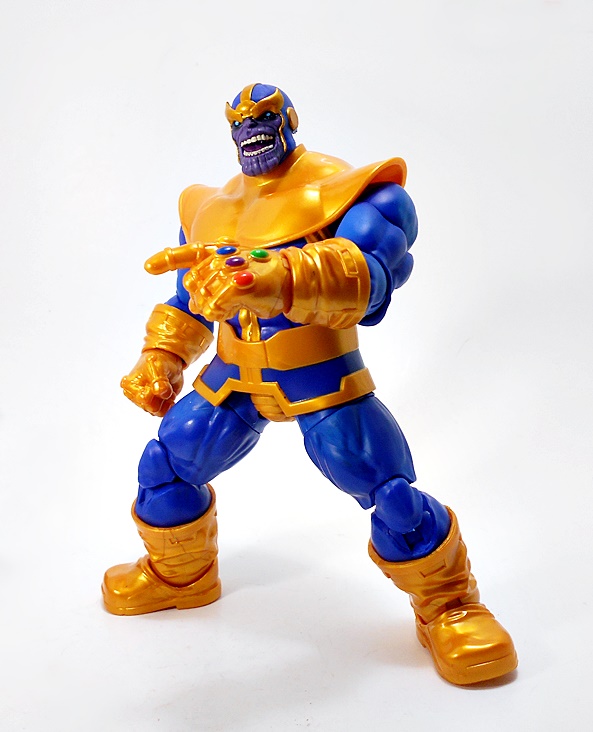 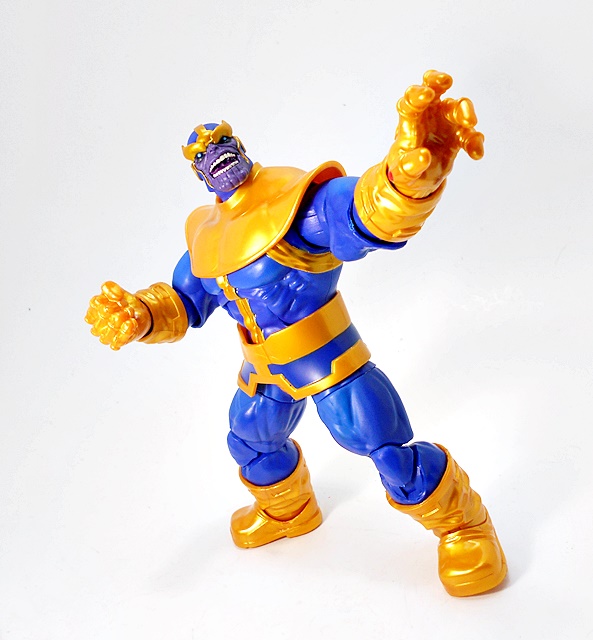 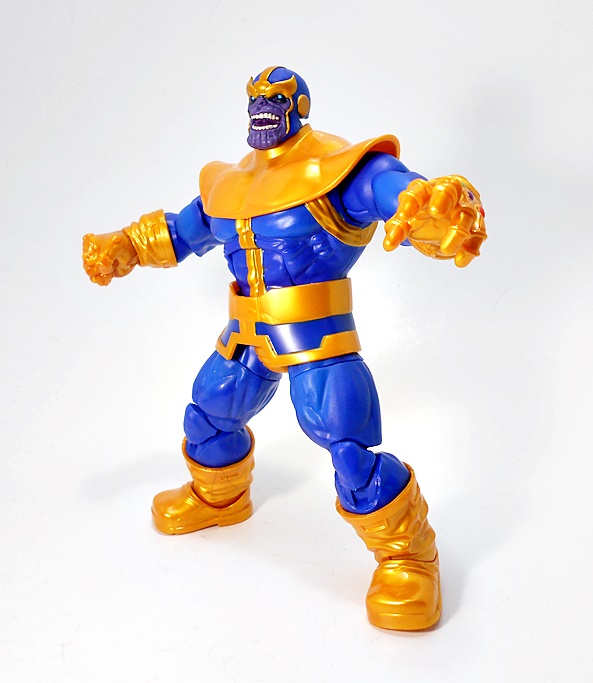 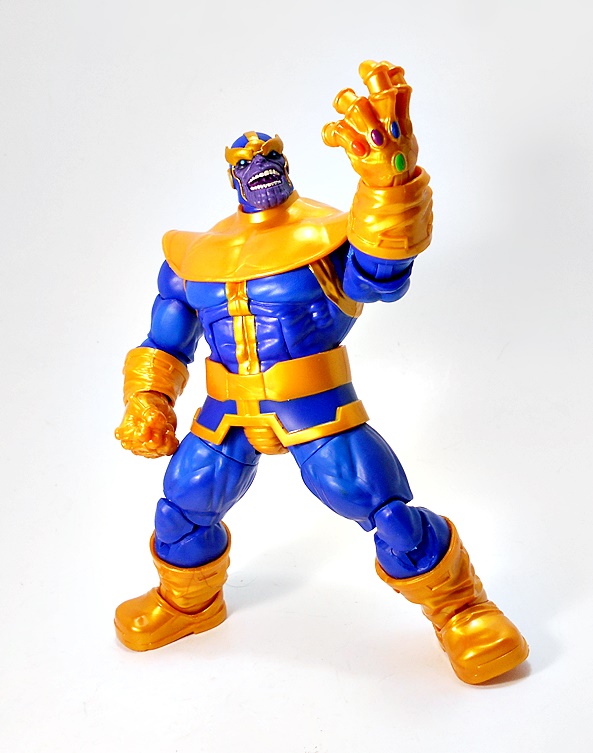 If you can’t tell, I absolutely adore this figure! My initial plan was to take a pass on this Thanos, because my Marvel Legends collection is getting so far out of hand. It takes up more space than almost any other facet of my collection and so I really need to start thinking twice about double-dipping on characters. But I am so damn glad that I took a closer look at the release and decided to buy him. Marvel Legends is one of my favorite action figure lines to collect, so when I say how absolutely delighted I was opening this purple bastard, that shouldn’t be taken lightly. It’s just that clean and colorful and stunningly iconic look that makes me feel like a kid again and makes me want to bust open some short boxes and start thumbing through my funnybooks. This figure is just a little bit of magic captured in plastic form, and it’s a perfect example of why I love collecting this line so much. I Predict this guy is going to be a resident of my desk for quite a while before he gets moved to the shelf.