What do I do on my day off away from work and toys? I usually play video games or read comics, because…. Well, I’m 40 going on 13. Today will be spent reveling in my find at the used book store yesterday:  A stack of Mickey Spillane comics that I never knew existed!

I’ve been a big Mickey Spillane fan for as long as I can remember. I love all the hard-boiled pulps, but for my money nobody did it better than Spillane. As a teenager, I had nasty, dog-eared paperback copies of his classics like “My Gun is Quick,” “I, The Jury” (held together by a rubber band!) and “One Lonely Night” and I read them over and over again. They were such fun reads and Mike Hammer was such a bad ass. When I owned my own antiquarian bookstore, I started getting into collecting his books in First Edition, especially his lesser known mystery series with the deliciously ridiculously named, Tiger Mann.

I had the pleasure of meeting Spillane once and having him sign a few for me. When I told him I owned a bookshop he offered to just do simple signatures, thinking I was going to sell them. I told him, “oh no, these are for me, and please make them as personal and specific as you want because I’m never going to sell them.” I think he liked that. Unfortunately, Spillane died back in 2006, but he left quite the legacy. 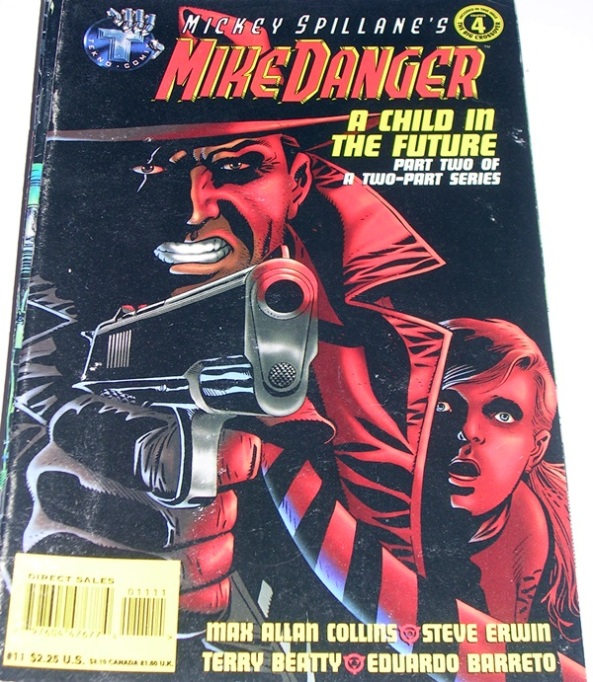 But comics? Yeah, while most people who remember Spillane know him for creating the pistol-whipping P.I. portrayed on TV by Stacey Keach, Spillane dabbled in a broad spectrum. In addition to pulps, he wrote a very cool children’s book, but he started his career as a comics writer. He was also a big fan of science fiction, and so it should be no surprise that it all eventually got blended together into Mike Danger, a yarn about a hard boiled cop from the 40’s who wakes up in the future. Mike Danger was published by the short-lived mid-90’s company, Tekno-Comix, an imprint that signed on concepts by big names, like Gene Roddenberry, Neil Gaiman and Spillane, but the actual stories were written in-house. Isn’t that kind of a cheat? Maybe, but I’m just happy that these books exist. 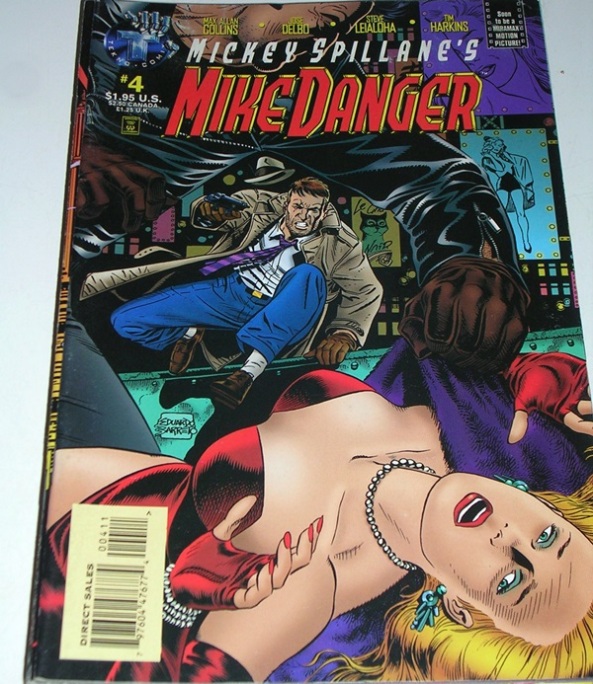 Honestly, I bought these more for their context in Spillane’s career and to round out my collection of his bibliography and influences, but having just finished reading through the first two-part story, I have to say what’s here is pretty good. Shamus Award winning author Max Allan Collins was on board for the entire run as writer and it was a great choice. The man really knows the P.I. genre and his familiarity to it really helps play to the fish-out-of-water aspect of Mike Danger out of time. He’s also a man that did his research and knew Spillane’s work, as he included some great nods back to Spillane’s novels, particularly to the aforementioned Tiger Mann in the superbly titled “A Woman Called Mann.”

The artwork tends to swerve all over the place, as it’s the work of several different artists. There’s nothing here that I hate, but there’s definitely some highs and lows throughout the course of the book. Steve Irwin, who has some DC and Malibu books under his belt, kicked things off pretty well. He handed the torch off to Jose Delbo, a name I only know from some Transformers books. But my favorite art in the entire run are some of the covers done by Eduardo Barreto. He did my favorite in the bunch:  Volume 2, No. 1. Barreto did an awesome job capturing the sensational covers of the pulp novels in the 40’s and 50’s and he even did some strong references to some Mike Hammer covers.

And there’s my day for you. I’m going to light up a delectable H. Upmann Corona Major, pour myself a glass of Johnnie Walker Black, and sit out on the patio and enjoy an overcast afternoon with the adventures of Mike Danger.

Images used are the copyright of Tekno Comix and are reproduced here for review purposes only. If you love comic books, support the artists and writers by BUYING them, either digitally or in print. Better yet, buy them in print and support your local comic shop too!