As far as I can tell, Jim Lee’s WildC.A.T.S. property doesn’t get a whole lot of love or attention anymore, or maybe I just don’t hang with the crowds that still enjoy it. Either way, I was pretty fond of the short lived cartoon and I had a few of the figures when they first came out. I’ve only read a few issues of the comic, but that’s more because I was going through a phase where I wasn’t all that into comics when the series came out. I’ll probably remedy that sooner or later. As a 90’s line, I bought a few of these figures as collectibles, since I was too old to be buying toys as toys. Later, I moved out of state and the ones I had got lost in the shuffle.

Well, a few weeks ago I picked up a Lot of figures off of Ebay in order to get at a Darkchylde figure that was in there and the Lot happened to include a carded Voodoo. It all came flooding back to me and a few days later I managed to hunt down a pretty good and nearly complete collection of the whole series loose at a ridiculously low price. That’s no great feat, since these figures aren’t exactly hotly sought after these days. Today, I’m going to look at the three ladies of the Covert Action Team: Voodoo, Zealot and Void. 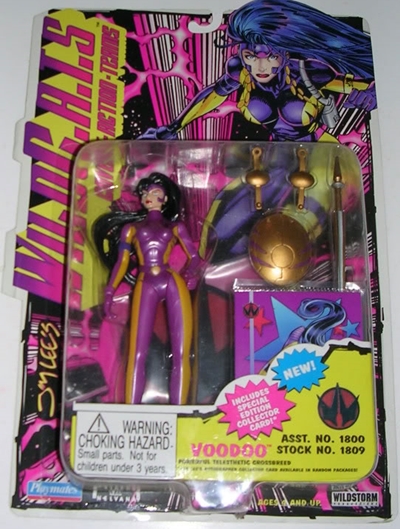 One undeniable thing about Playmates is that they know how to make obnoxiously exciting packages. The figures come on a pretty simple bubble and card, but I absolutely love the presentation, mainly because they’re so colorful and feature great character art from the comic. The card fronts were all personalized with a picture of the character. The backs of the cards vary, but they all have a short bio of the character that follows the cartoon, rather than the more mature themed comic, so you won’t see anything about Voodoo being a former erotic pole dancer. I guess Playmates didn’t think the kids were quite ready for that. Let’s start with Void… 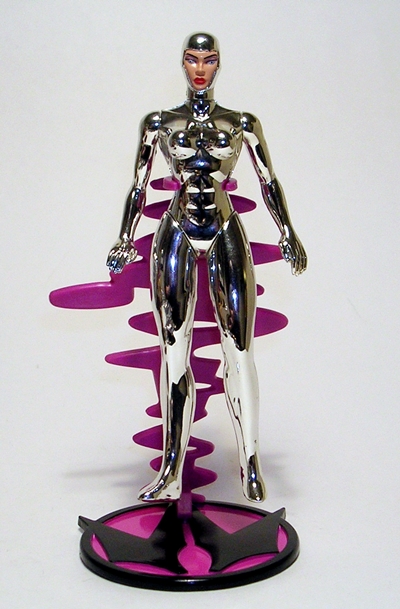 In the cartoon, Void was the personification of the Covert Action Team’s computer. Besides having a wealth of information, she could open the void gates that teleported the team to wherever the Daemonites were wreaking havoc. She has the simplest sculpt of the bunch, but she’s still a damn cool looking figure, thanks to her entire body being vac-plated giving her a mirrored chrome effect. She has some muscle lines on her torso and her fingers are sculpted, but apart from that she’s pretty featureless, which is perfectly in line with her character design. Her face is regular flesh tone with red lips and blue eyes. The eyes are the only beef I have with this figure, as Playmates should have left them without pupils. 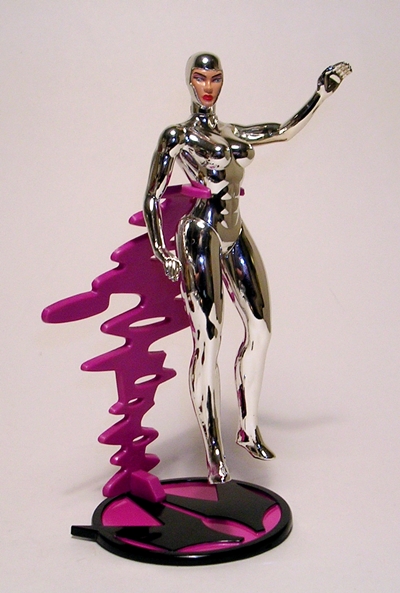 Void doesn’t come with any accessories apart from her stand, which does feature a nifty back piece that snaps on and allows the figure to appear as though she’s levitating as she always did in the cartoon. 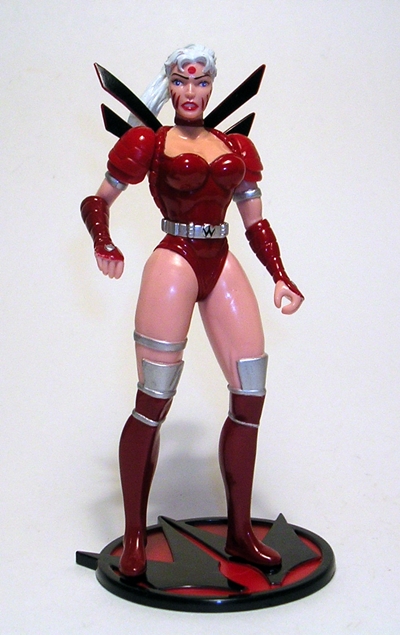 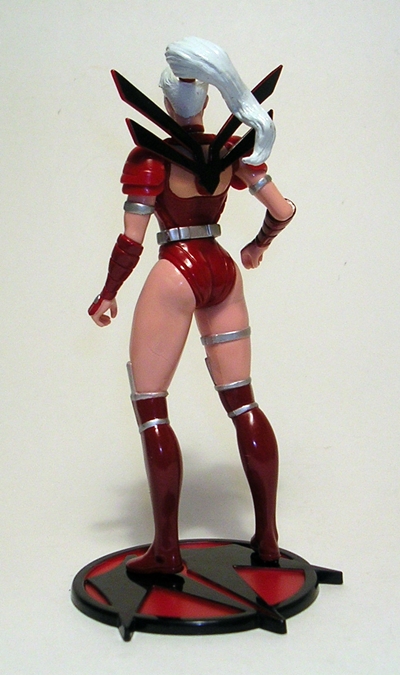 Zealot is the team’s resident femme fatale warrior hottie and her figure certainly looks the part. She’s wearing a crimson one-piece with a plunging chestline and crimson boots and arm bracers. The colors on this figure are really nicely done, even if she is mostly just crimson and skin tone with some silver and black accents. Playmates did a nice job with her headsculpt. Sure it’s heavily stylized, but it still manages to look both attractive and fierce. Her white hair is done up in a ponytail, which is actually fitted with a swivel cut, so you can position it in a variety of ways. 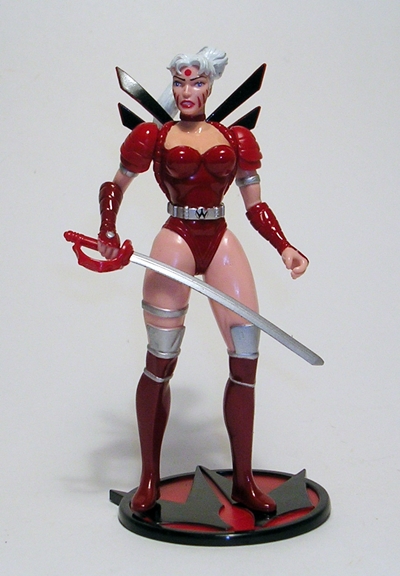 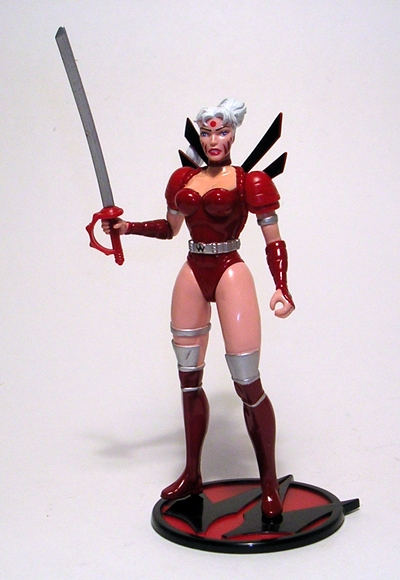 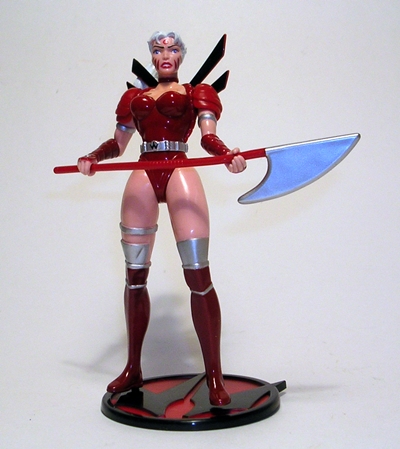 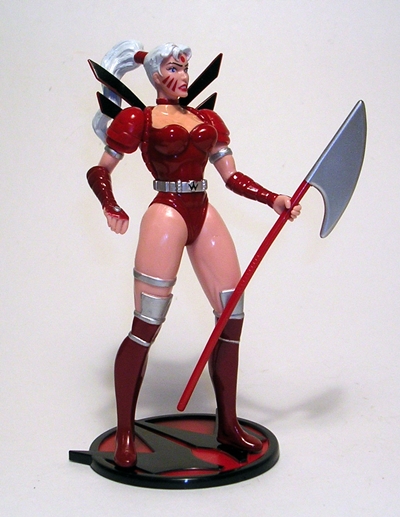 Zealot comes with two swords and a pole axe. Unfortunately the sword blades are soft rubber and are very prone to warping if you aren’t careful. I’m not a big fan of the axe, since she doesn’t hold it all that well and her preposed arms aren’t really designed for her to wield it all that well anyway. Zealot also comes with a pegged figure stand. All in all Zealot is a figure that just oozes comic book charm. 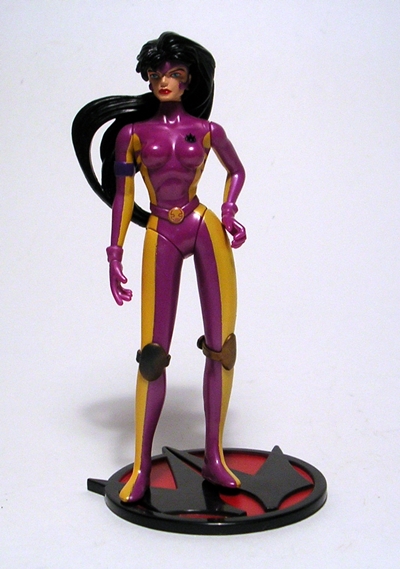 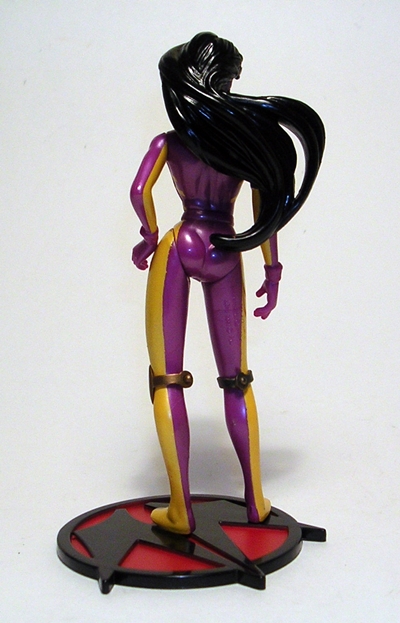 Voodoo’s character changed quite a bit in the transition from comic to cartoon, but I’ve already mentioned that above. Her cartoon counterpart reminds me a lot of Jubilee in the X-Men cartoon. She was a noob and I recall her often being picked on by Zealot. She was basically there to give the kids someone to relate to. Voodoo sports a tight purple and yellow bodysuit with removable gold kneepads. She’s a great looking figure, but she really suffers from being pre-posed, even moreso than the other two ladies. Her hip is thrown seductively to the side and one elbow is bent to rest on said hip. Her head sculpt is my favorite of the three, especially with the cool way Playmates sculpted her long flowing black hair. She’s super cute and matches her character art quite well. 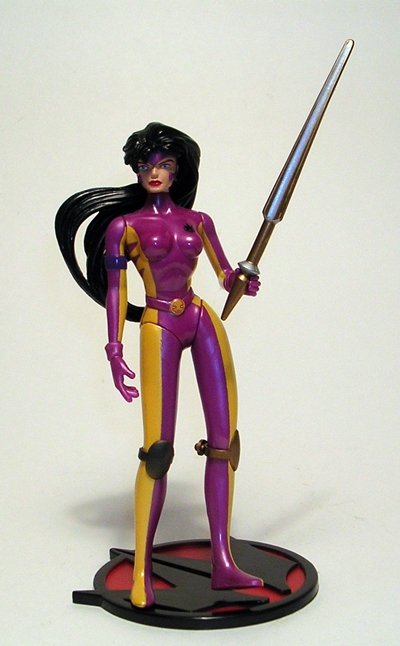 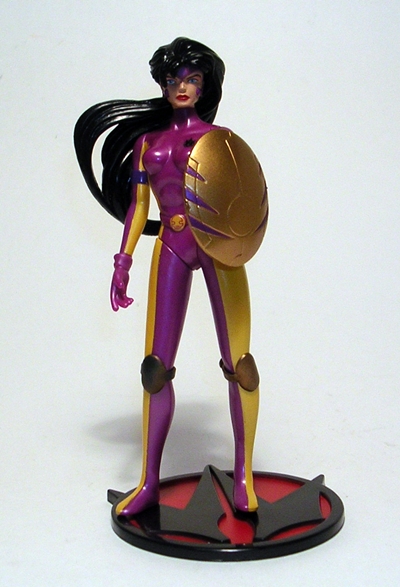 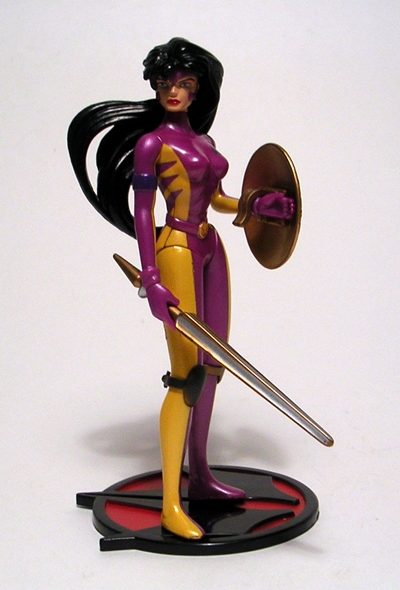 Voodoo comes with the two removable gold kneepads, a gold shield and a sword-spear thingy. Her pre-posing isn’t terribly well suited to her weapons, but she can hold her sword ok, and her shield clips on to her wrist. She also comes with a pegged figure stand.

I think the reason I liked these figures so much when they came out was because they walked the fine line between toys and collectibles. Their pre-posed nature and their figure stands made them great for display. On the other hand, I’m not sure how much fun they would have been to play with because of their limited articulation. Each figure has the bare minimum of five points: Rotating neck, rotating arms at the shoulder, rotating legs up at the hips. They’re good for a few poses, but I think rather limited in their play value. 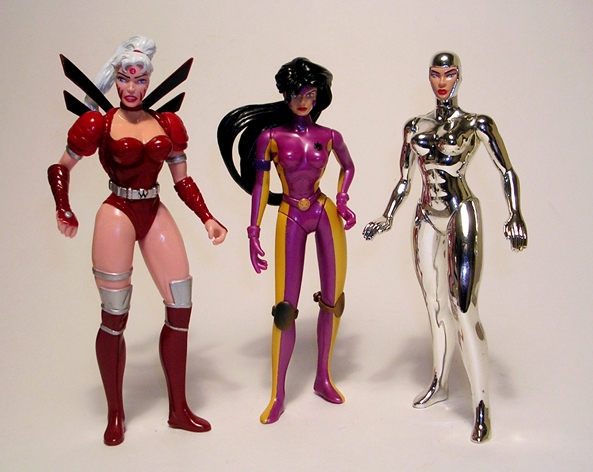 Playmates was marketing these figures right about the same time as their Star Trek figures. Obviously, these are bigger and I think a lot more faithful to the source material, but apart from that the two lines have a lot of similarities in their execution. Its hard to put my finger on why I love them so much, but I guess it mainly comes down to the fact that they’re colorful, flashy and look great on display and are based on a cartoon that I still dig re-watching every now and then. Sure, I would have loved to see better articulation, but apart from that they are excellent comic/cartoon figures in every other way.