I practically grew up on the Nightmare on Elm Street movies. If you’re pushing forty like me, you probably remember that Freddy Krueger was a huge part of the pop culture of the time and there was always a bizarre amount of merchandising around the character. I had comic books, a toy freddy glove and I even had a poster of him (I won it spinning a wheel on the Jersey boardwalk) hanging in my room. Yeah… I had a poster of an undead child murderer hanging in my room. Amazing I turned out as well as I did. Hell, there was even a weekly TV series. Of all the crazed slashers that hit the theaters in the 80s, none of them had more appeal (or a better agent) than the K-Man. 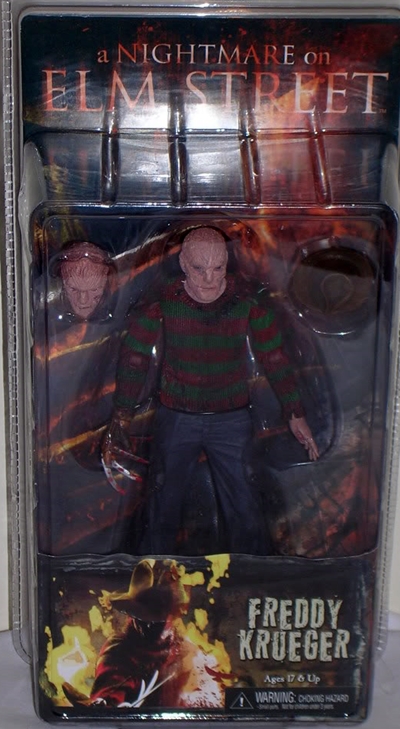 Obviously, the Elm Street franchise changed a lot during its lifetime. The first movie was pretty damn creepy, the second was pretty damn crappy, and beyond that the series quickly turned into a parody of itself. That’s not an insult, mind you, I think the series really came into its own when it achieved a campy comic book-style wackiness mixed with some nuggets of true horror. I enjoyed the franchise for most of its stretch, and I was always willing to go see Freddy quick with his razor glove and the one-liners. Alas, by the time The New Nightmare came out, I just didn’t care any more. A lot of my friends still swear by that movie. I may have to check it out again. Anyway, reminiscing isn’t really why we’re here today. Nightmare on Elm Street got a remake and NECA stepped up with two action figures of the new Freddy Kreuger. There’s Freddy before and after getting the zippo equivalent of a lynching. I found both of these figures at Toys R Us today, but I opted to just bring home the “After” figure, since the first one is just some dude to me. I thought it funny that he was also hanging right next to a pair of figures from the older Elm Street films. Some day I may have to pick those up too. 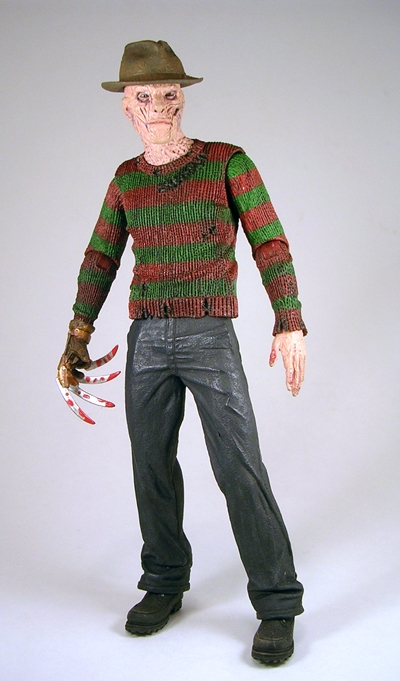 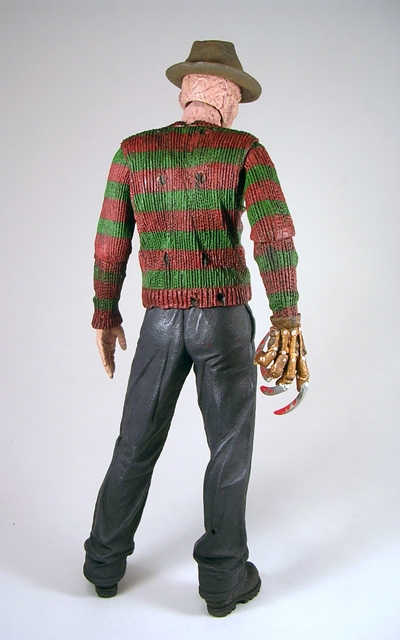 It seems there’s a lot of mixed feelings about the new Freddy design, or more specifically his face. Personally, I like it a lot. The burns are more realistic and his face is a lot creepier than his original style. Either way, this isn’t Robert Englund anymore, so he really should look different. Well, like the new look or not, the headsculpt on NECA’s figure (or sculpts, since he comes with two heads) is excellent and very close to the stills I’ve seen from the new movie. I think he looks a lot less human and more demonic. There’s a ton of intricate texturing in the sculpt and the coolest thing is the fedora is removable, so you can display either head with or without it. As for the two heads, there really isn’t a huge amount of difference. The one he had on in the package has the mouth closed, the other has it open in a partial snarl. The snarl head shows a bit more exposed muscle to the left cheek and as such, I think I like that one a little more. Overall, its just more expressive.

The rest of the figure’s sculpt is just as good. The texturing on his ratty trademark sweater is excellent, both in the simulated fabric and the subtle tears and distressing. There are even some holes worn through it in the back. The red and green paint on the sweater looks really good too. It’s possibly a little too glossy for fabric, as it tends to look like its wet, but I’m really nitpicking to complain about anything. Of course, he wouldn’t be Freddy without his glove. The glove is nicely detailed and its sculpted into a partially open position that allows for a good looking pose in just about any position you move his arm. I’m a little disappointed that NECA didn’t go for a swappable glove in a different position. I would have definitely preferred that over getting the two portraits, but what’s here is still plenty good. 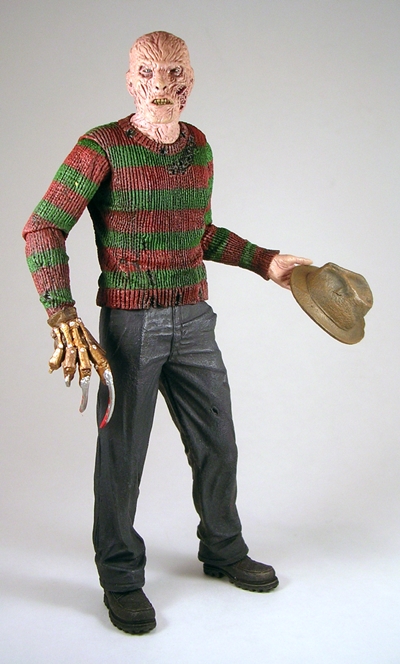 What’s not so good is the articulation. I think NECA’s inconsistency with articulation is the company’s only failing. In this case, Freddy is a statue from the waist down. Ok, technically his ankles are balljoints, but between the sculpting of his pants cuffs and the lack of articulation in his legs, these joints are useless. His upper body is thankfully a different story. He has a slight ability to swivel at the waist. His arms feature balljoints in both the shoulders and elbows. His head is balljointed, and his wrists have swivel cuts. You can get a pretty good range of poses, just nothing terribly dynamic. 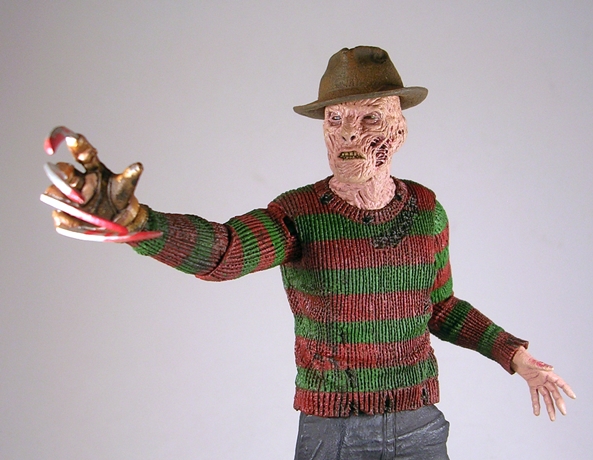 Freddy set me back $13.99, which is pretty much what all the other figures in TRU’s “collectible” action figure aisle go for these days. It’s hard to quarrel with that price when the sculpt and paint are this good. I’m very happy with him and whether or not the movie flops or rises to the occasion, I’m glad to have this reimagined Kreuger in my collection.

As for the movie… I’m not one of those people who rabidly object to Hollywood trying a remake. Yeah, many of them are souless cash grabs, but I think many of them have actually been fairly successful when it comes to the horror reboots. The Texas Chainsaw Massacre was really well done. The Hills Have Eyes was awesome and Friday the 13th… well, as Meat Loaf says, “two out of three ain’t bad.” But while some are wailing over their beloved Freddy getting rebooted, I’m actually interested to see the results. On the one hand, it looks like they’re definitely going for scares over campy laughs, but then judging from the trailers, I’m worried that the thing is going to be too much of a shot-by-shot remake. Well, we’ll know soon enough. I’ll be hitting the theater the week it comes out.