Ah, Ross, you’re like the retail chain store version of a rummage sale! I always mean to go in there more often because the toy graveyard they have set up in the back occasionally nets some good finds. Unfortunately, it’s not all that often and so I get discouraged and stop going, and then who knows how much good stuff I miss out on. My last  trip was motivated by word on the Interwebs that the elusive last assortment of GI JOE 25th Anniversary vehicles were showing up. I had no such luck, but I did come home with three Transformers: Animated Voyager Class figures for $11.99 each. 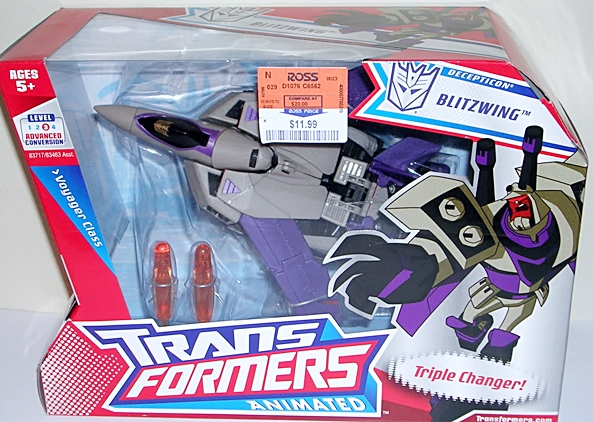 I’ll let the packaged shot speak for itself and instead take this time to throw out a little background, although I won’t go into my feelings about this cartoon series. I’ve seen some of it, but not enough to form a solid opinion yet. Suffice it to say I’m definitely not its target audience, but I want to give it a chance. Still, being the unabashed Transformers whore that I am, I decided to check out some of these figures when they first came out. I picked up Deluxe Bumblebee and Ratchet and was pleasantly surprised. I still haven’t gotten around to doing Features on them yet, but hopefully soon. The plastic seemed a little funky compared to other Transformers lines (seriously, Hasbro, what’s up with that?), but once I got past the wacky animated look, I found that the figure designs were pretty good. A little while later I bought my first Animated Voyager, Blitzwing, and it was the biggest piece of crap I’ve ever seen. It wasn’t that I didn’t like the figure, but rather the fact that the one I got was all sorts of messed up with loose parts, broken parts, etc. The quality was worse than a knock-off. Needless to say it soured me on pursuing the line any further. Apparently, the deal at Ross was good enough to get me to try some of these again, as well as try my luck at getting a decent Blitzwing. So we’ll start with him. True to his G1 namesake, Animated Blitzwing is a Triple Changer and also like his forefather, his two alt modes are a tank and a jet. Blitzwing is packaged in his jet form, so let’s start there. 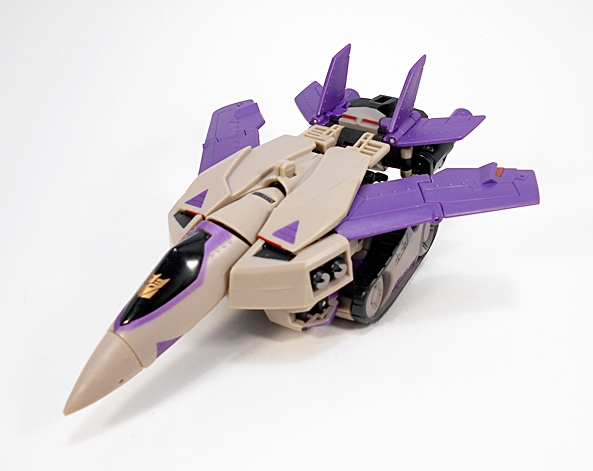 His jet mode is obviously the primary alt form, in other words, it’s the one Hasbro put most of the work into, although a lot of this figure feels like a three-way compromise. Overall, the jet looks pretty good, especially for a triple changer, and from the top down, there’s not a whole lot wrong with it. You get a grayish-tan body with some purple and black mixed in, and a glossy black cockpit with a gold Decepticon emblem stamped on it. From a side or profile view, the huge, exposed treads make for some obvious tank kibble, but all in all, I dig this mode.

And then there’s Blitzwing’s other alternate mode. If you’re expecting anything resembling a real tank, you’ll be woefully disappointed. This form is a tank only in the sense that it has treads and a turret. It’s hard to figure whether this is supposed to be some kind of futuristic tank in the animated style, a Cybertronian tank, or just a super-deformed mess. That having been said, there are some cool things at play here, like the way the jet’s wings form the plating on the tank’s body. Images have these two pieces fitting together flush, but mine always seems to leave a gap. The guns and missiles are made up of the jet’s thrusters, cast in translucent orange plastic. The turret turns and the missiles shoot, but it does not raise or lower.

I really like Blitzwing’s robot form. He’s got a few things in common with the traditional G1 Seeker model, with the cockpit and nosecone of his jet mode forming his chest and his wings coming off of his arms. Even the “helmet” gives off a strong Conehead vibe for me. The wings on the arms can be folded back, but they tend to get in a way more in that position, so I usually leave them hanging off the side of his arms. 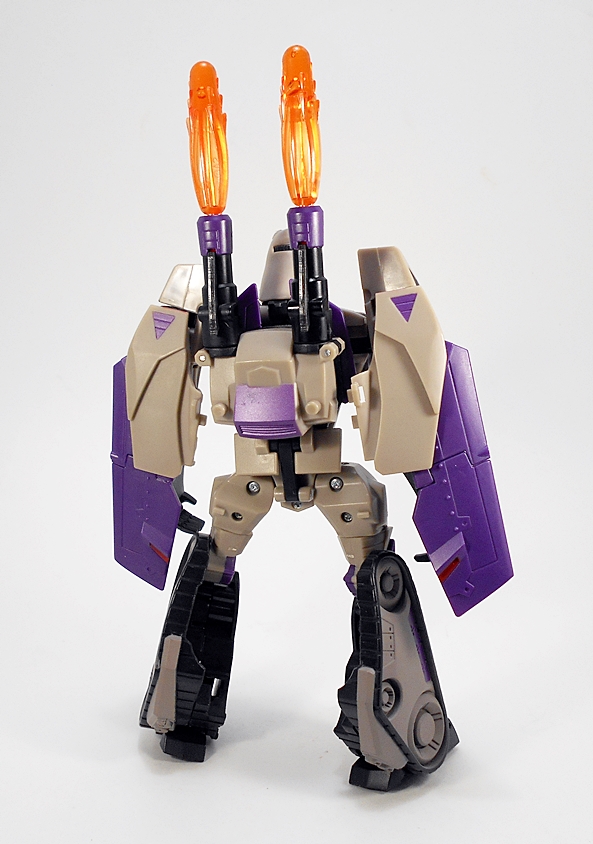 His backpack, which is made up of the tank’s turret, can be positioned in a few different ways. Point the missiles up, or turn them facing down for a nice looking jetpack. You can also space them further apart so that they protrude less and are closer to his shoulders. I’ve shot him using both configurations, but I think the later is my favorite. The obvious thing missing here is any weapons. Blitzwing doesn’t come with a gun and his missile launchers can’t really be positioned in a way to fire from his back. I suppose if you can turn into a tank, you don’t need any weapons, but still. A Decepticon without some kind of gun or arm cannon just doesn’t feel right to me. 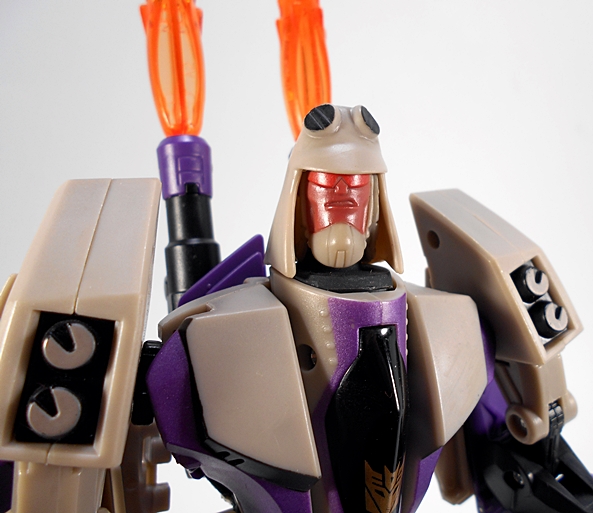 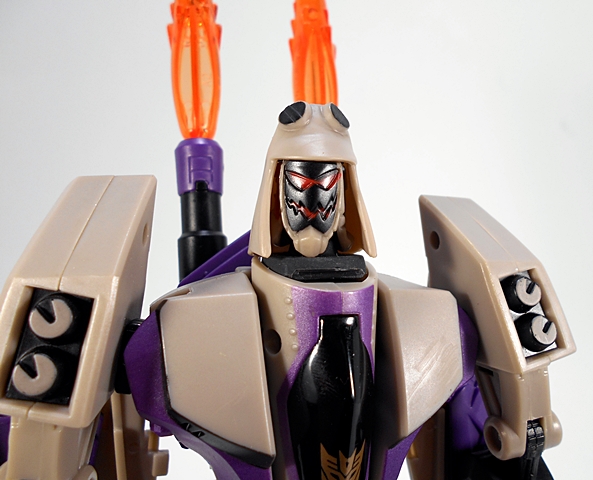 Blitzwing does have a gimmick that’s ripped off of Man-E-Faces from the Masters of the Universe line. He has three different faces, which can be rotated with a thumb wheel on the back of the head. It’s an odd thing to see in a Transformer, but if you watch some of the few episodes of the cartoon that actually have Decepticons in it, it makes sense for the character. It really doesn’t detract from the figure all that much, so I don’t have a big problem with it. Also, those things on the top of his head remind me of Hellboy. I just can’t unsee it.

The articulation here is pretty good. Blitzwing’s head rotates, his shoulders have universal movement and his elbows are double hinged, and his wrists are hinged. He also has swivels in his biceps. His legs have universal movement in the hips, his knees and ankles are hinged, and he has swivels in his thighs. There’s a conspicuous lack of balljoints, but Blitzwing’s articulation isn’t wanting because of it.

I’m happy to finally have a decent example of this figure. I don’t know if the first one I got was just a fluke or if there was a widespread QC issue with these figures, but having one that isn’t broken to hell makes all the difference. As much as I’m not all that impressed with his tank mode, he’s still a great looking robot and ultimately a fun figure. Given the added challenges of designing a Triple Changer, I’d say Hasbro did a pretty good job here.