Ok, so yesterday I figured out that Animated Shockwave wasn’t exactly awesome, today let’s give it a go with another Animated Voyager Class figure I picked up on clearance at Marshall’s last week. It’s everyone’s favorite Dinobot, Grimlock. Yes, he is your favorite… don’t lie to me!!! Apart from giving him the show’s super stylized treatment, Grimlock’s design doesn’t change all that much from G1 to the Animated series, and I’m happy to say Hasbro managed to clearly convey that through this figure’s simple, but elegant design. 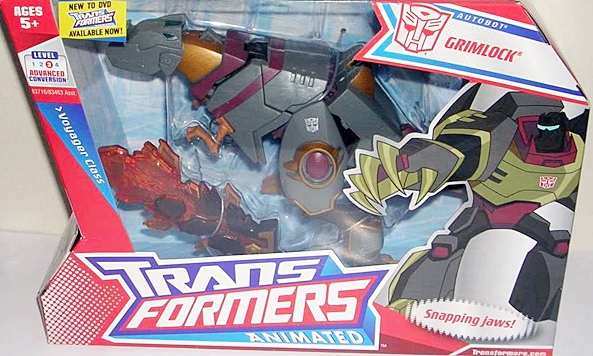 Grimlock comes packaged in his T-Rex mode in the typical Animated Voyager Class box. I don’t have much new to add about the packaging, but I will say that I’m glad that they made him a Voyager. If there’s one thing that Classics Grimlock proved to me is that he doesn’t work well as a Deluxe Class toy. He should be large, hulking, and bigger, or at least as big, as Optimus Prime. 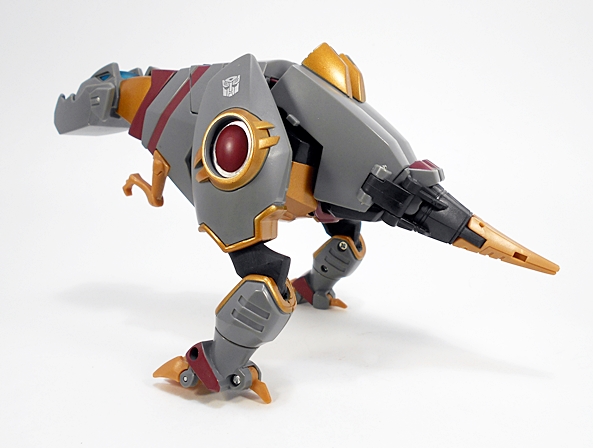 The T-Rex mode is the spitting image of the new Animated style. It’s very angular in the body and features some contours in the legs. I really like the strong mechanical look to his giant hinged jaw, which features that massive under-bite that makes him look like he’s related to a backhoe.There’s also a lot of play value in this mode. There’s a button on the back of his neck that gives him chomping action, and his legs have a satisfying amount of articulation, including two hinged “knees,” hinged toes, a swivel above the ankle and universal movement in the “shoulders.” He can balance pretty well too. The only downside about this mode is that his belly has a hollow look to it, but unless you’re turning him over, you probably won’t see this much.

The coloring here is damn nice too. Grimlock gets by with a lot of gray plastic, mixed with some maroon and gold accents. The gold paint has a great metallic finish to it. He also features a silver Autobot insignia on his upper left leg and he has bright blue eyes.

Transforming Grimlock should feel like Deja Vous to anyone who has owned or still owns the original G1 toy. He’s a very easy figure to convert and the resulting robot mode is both pleasing and familiar. I particularly like the way the legs pack together to form heels and the tips of the tail tab in to the sides of his legs. The production photos I’d seen of the the toy made him look really squat, but in hand he is far better proportioned and he really doesn’t suffer from Lugnut’s tiny legs syndrome as I had feared he would.

The head sculpt is pretty awesome, and I love how he retains that heavy mechanical jaw look even on his robot head, as it gives him a ton of personality. He also sports some mighty impressive light piping in his blue visor. The colors in robot mode are pretty close to his dinosaur mode, only with a little more of that lovely gold paint on display. His chest features a sculpted transparent plate with some cool circuitry patterns sculpted in behind it and a silver Autobot emblem centered proudly on his chest.

Grimlock’s articulation in robot mode is decent enough, and look… he can do the hurt RoboCop pose! I love that! His arms are exactly the same here as his legs are in T-Rex mode, so all of that articulation carries forward. His legs feature ball joints in the hips and hinges in the ankles, and his head is also ball jointed. 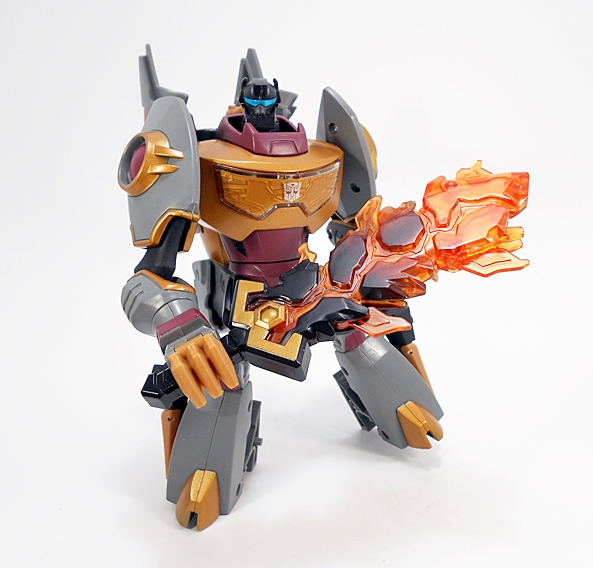 Grimlock comes with a huge flaming sword with a play feature of its own. If you put it in his hand and turn the hand, spring-loaded flames will pop out of the edges. I didn’t say it was a great play feature. Truth be told, it’s not all that noticeable, but the sword still looks great. It’s got a molten lava motif going on and features some very pretty translucent orange plastic.

If you read my look at Classics Grimlock from last week, you may remember I had issues with the way Hasbro over complicated his transformation. It was like they were intentionally trying to just be different. Animated Grimlock takes the wiser and simpler route and maintains almost the same conversion process as the G1 toy, with just a few added tweaks and bobs. What we got is a toy that is surprisingly more faithful and ultimately a lot of fun. Granted, this toy is riding on a fondness for the Animated design, but if you count yourself among the fans, than this guy should satisfy. It’s quite simply a beautiful rendering of that quirky Animated style in plastic form.