Always happy to turn a buck off of the insatiable popularity of the Daleks, CO has devised three episode-specific sets that will not only give collectors a chance to pick up some more Daleks, but also a Classic Series version of the Dalek creator himself, Davros. Each of these sets follow the same basic pattern and include a Doctor figure, Davros, and two Daleks from the episode in question. They already released the 5th Doctor set based off “Resurrection of the Daleks” and are planning a 4th Doctor “Genesis of the Daleks” set, but today we’re going to look at the one based off of the 6th Doctor story, “Revelation of the Daleks” from 1985. It’s the only one of the three sets I plan on buying, and soon you’ll see why. [CO has since revealed a pretty awesome looking “Destiny of the Daleks” set too, which may have me rethinking my only buy one of these decision. -FF]

The package is similar to what we’ve seen in other recently released Classic sets. CO has become pretty formulaic about the package design with these sets, and that’s not at all a bad thing. It features a blue pattern and the logo introduced in the 2005 series. The back panel features stills from the episode as well as a blurb about the 6th Doctor and a little bit about the episode’s story. The figures are arranged side by side in a long tray and the cardboard insert has a montage of images from the episode, including Davros in his little head-tank, which is actually how he spent most of the episode. The package is perfectly collector friendly so you can remove the figures and return them to the box for display. 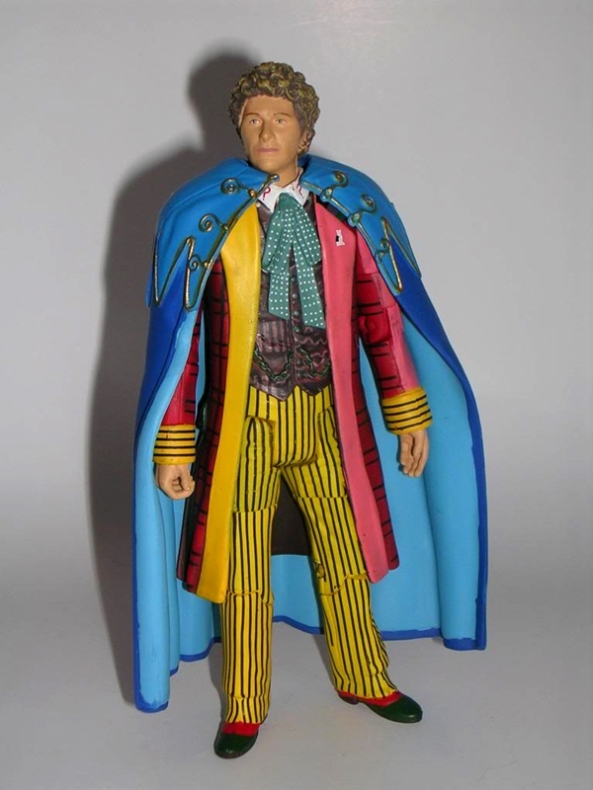 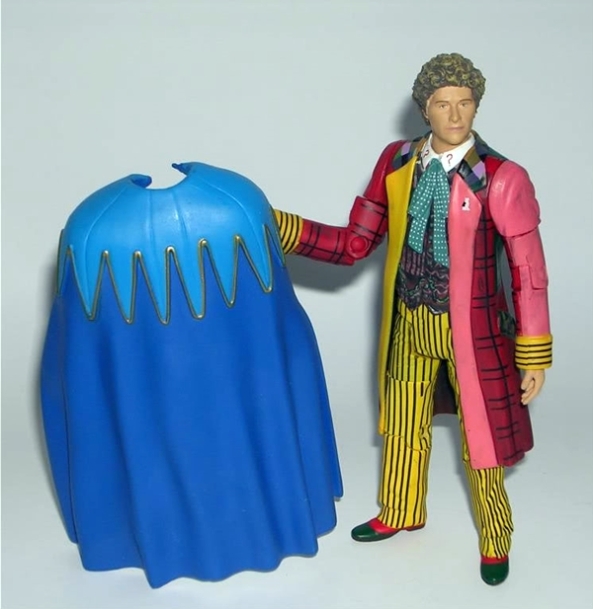 The Doctor figure included is a variant of the same old 6th Doctor figure we’ve already seen numerous times, and that tends to be the sticking point in each of these sets. If you want to get Classic Davros and some Daleks, you have to get a variant of a Doctor figure you probably already have in your collection. The reason I went with the Revelation set is that unlike that 5th Doctor figure, this figure actually has some new tooling, in that he’s wearing the blue cape The Doctor wore when first arriving on the planet Necros in the first half of the story. Ok, so the figure itself is actually identical to the one released on a single card way back when, but it does have the cape, sculpted in soft plastic, which is also completely removable. Funny, I’ve seen this episode dozens of times, but I never noticed until now that the ornamental stitching by the cape’s buttons are actually question marks. Cool! If you don’t already have a 6th Doctor figure, here’s a great chance to get him and he is a great sculpt.

The Daleks in the set include one Skaro Dalek and one Necros Dalek. The distinction was pretty important to the story as Davros was busy on Necros farming dead people and turning them into a new army of loyal Daleks. The episode ends with a mini Dalek Civil War as Daleks arrive from Skaro to take the fugitive Davros into custody. I’m always up for seeing Daleks blasting away at other Daleks, so it’s nice to get one from each opposing faction. Both of these Daleks should look pretty familiar, as we’ve seen the sculpt before. To be honest, I’ve been a Doctor Who fan for almost 30 years now and even I get bored trying to pinpoint all the subtle differences in the Dalek designs over the years. If you have the Dalek that was packaged a little while ago with the 7th Doctor (based on “Remembrance of the Daleks”), you’ll recognize the gold and white color scheme on the Necros Dalek, but there are significant differences in the sculpt. The Necros Dalek and the Skaro Dalek, however, are repaints of the same sculpt. 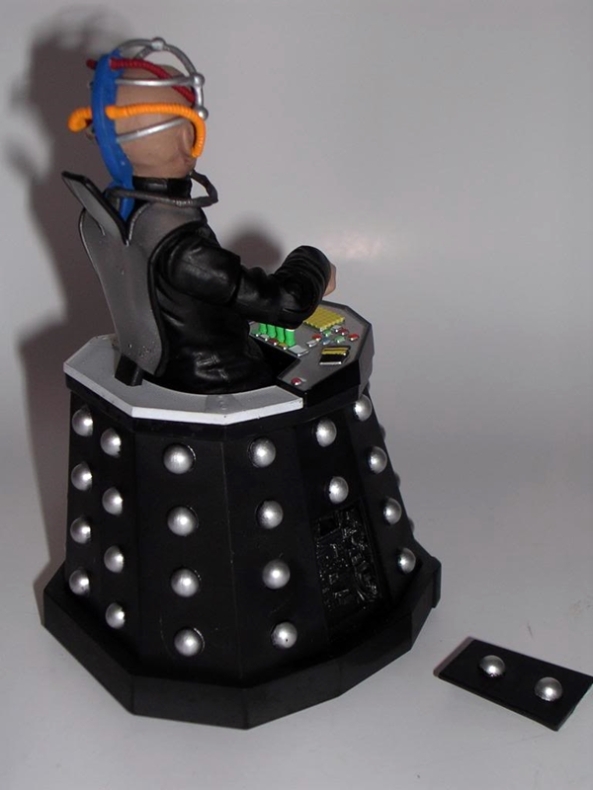 And then there’s Classic Davros, which is probably the figure that collectors want the most out of this set. Davros is an entirely new sculpt from the figure based off his appearance in the modern series and a really awesome looking figure. He’s appropriately smaller and more primitive looking than the Modern Series figure. The wires and framework on his head are a bit chunkier than screen accurate, but it’s forgiveable as they’re certainly more durable. There’s a maintenance hatch on the side of his chair, which springs open by pressing one of the sensor globes. It wasn’t seen open in “Revelation of the Daleks”, but I’m sure it’s here because the mold was designed to work with the “Resurrection of the Daleks” set where a technician opened the hatch to service Davros before getting turned into a mindslave. You also get a swappable hand with this set as Davros’ hand was blown off toward the end of Revelation. The damaged hand is bandaged and oozing green goo. Make sure you get it out of the package before you throw it out! 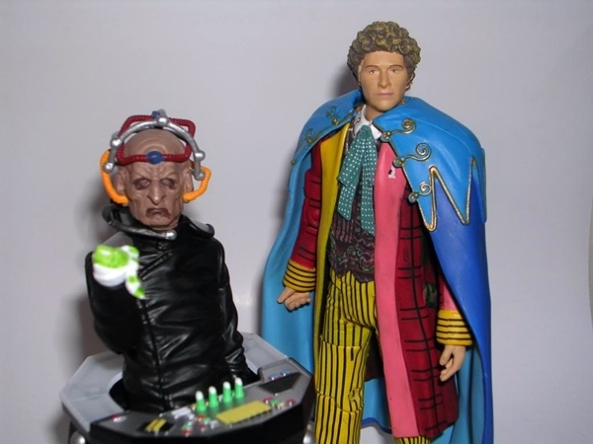 I’m really happy with the way this set turned out, although it’s worth stating the obvious that I would have much rather had the option to buy Classic Davros as a single carded figure. Getting new Daleks is never a bad thing, but it would have been more merciful to my wallet if CO had given us a carded Davros and then release all the Daleks from these sets in multipacks like they have in the past. Don’t get me wrong, the Necros 6th Doctor is a cool addition to my collection, and when you get down to it, $15 a piece for these figures (the set cost me about $60 with shipping) isn’t off the charts. 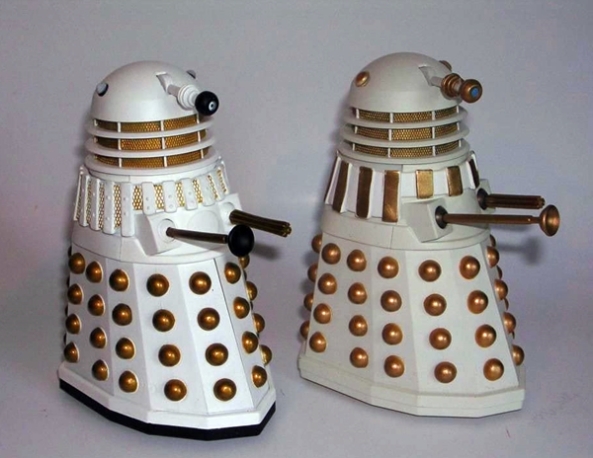 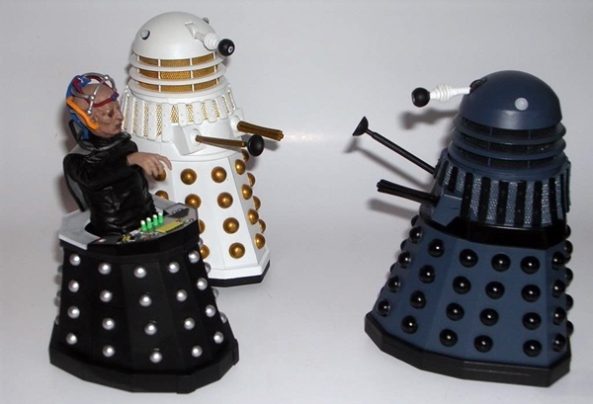