[It’s a total coincidence that just a couple of days before I post today’s Ghostbusters related entry, Mattel announced that they will not be offering a 2012 subscription for Club Ecto-1. They are apparently going through with the figures that were already in production and will be offering past figures one last time, but it seems as if Mattel’s Ghostbusters license has just about run its course. I can’t say as I’m surprised. I am pretty disappointed with the way Matty treated the license. And while I’m happy to finally own a decent set of the team in both 6″ and 12″ versions, I wish Mattel had planned the whole thing better than they did. With that having been said, let’s take a look at a Ghostbusters product that’s not made by Mattel.]

I haven’t looked at a lot of statues here on FigureFan. In fact, the closest thing I can think of would be one of Weta’s Doctor Who busts. Nonetheless, I’ve been wanting to check out some of Koto’s Bishoujo statues for a long time now, particularly because they feature a line of reasonably priced statues of both DC and Marvel ladies all in a uniform scale, and I’d really like to put together a collection of those. But I’m actually taking my first step into the line with what is more of a stand alone piece, this super cute anime inspired Ghostbusters statue. Let’s check out Lucy… 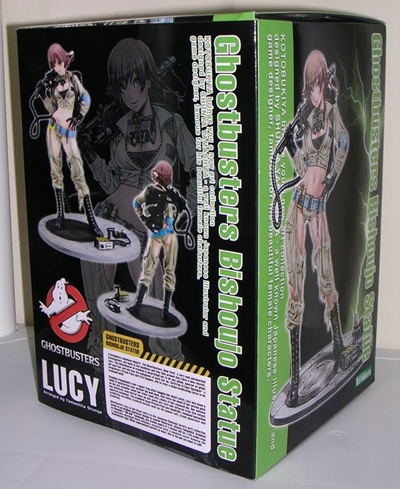 The statue comes in a really attractive window box. It’s mostly black with a neon green lightning deco and lettering, along with the iconic Ghostbusters emblem and a nice illustration of the character. The back panel shows photos of the statue and has a little filecard about Lucy herself. While you get a good idea about what you’re getting inside, Lucy is wrapped up in a lot of plastic, which renders the window a little useless. I suppose if you take her out, unwrap her and put her back into the tray you could see things a little better. The box is entirely collector friendly, although you do need to partially disassemble her to get her back in and even then, it isn’t optimal for display purposes.

Lucy comes out of the box separate from her stand and requiring just a wee bit of easy assembly. You plug the pegs on her feet into the stand. Pop her head off to slide the goggles down around her neck, and plug the proton emitter hose into the proton pack and place the wand in her hand. That’s it. There’s nothing tricky or delicate here, and everything comes apart again real easy if you want to return her to the package. 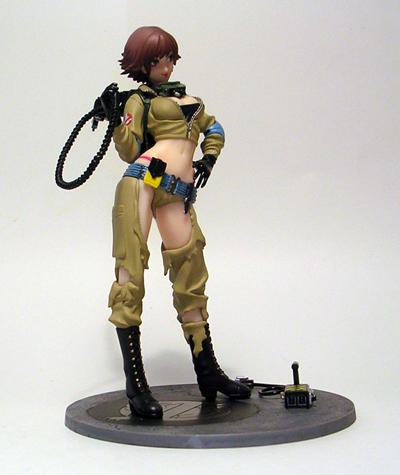 While Lucy is an officially licensed Ghostbuster product, she’s like no other Ghostbuster we’ve seen before. As in keeping with Koto’s Bishoujo line, she’s a hyper-cute and sexy anime-style take on the license. Why Koto didn’t just give her red hair, slap some glasses on her and call her Janine is beyond me, because I think it would have worked. At the very least it would have made a hell of an easy repaint exclusive. But hey, very little about this statue is conventional.

The base is regular plastic as is the equipment, while the statue itself is made from PVC. The PVC medium here makes for a bit of a soft sculpt, but I think it suits the statue fairly well. The paintwork and coloring is certainly well done. I think my only gripe here is that when placed under direct light the top of Lucy’s head looks somewhat transparent, or at least lighter than the rest of the statue.

While Lucy herself looks like she’s straight off the pages of a manga, her equipment looks totally authentic and faithful to the film license. The sculpt on the proton pack is a little bit simplified, but still features most of the lights, knobs and wires from the original prop and the same goes for the wand. The trap, which is permanently attached to the stand, also looks great and includes the foot pedal. Her jumpsuit, or at least what’s left of it, looks like a modified version of the type worn by the guys. The top is modified to show off Lucy’s midriff and the zipper is pulled down to display her… um, paranormal assetts. Her pants are shredded to bits, [Holy crap, did she encounter a rape ghost?] and you can see the straps from her pink thong peeking out over her utility belt.

Koto’s Bishoujo statues generally start at around $50-60, depending on where you go to order them. Older statues can go up or down a bit. I picked up Lucy from Big Bad Toy Store for just under fifty, which seemed like one of the better prices. I’ve had my eye on her since the first production images were released earlier this year and I’m quite happy with the final product. You can definitely expect to see some more of these statues here on FigureFan in the coming months. I’ve got my eye on Catwoman next!