It is a great time to be a Marvel comic book fan, when even characters that were once considered second or third tier are not only getting their own figures, but also huge budget movies. While I’m not sure the movie-going audience is as ready for Rocket Raccoon and company as they are for The Avengers, it’ll be an interesting experiment to see just how much hardcore nerd culture the general populace will stomach for their entertainment. Either way, this set must be somewhat popular with collectors, since it took me forever to finally find one on the shelf. When I did a week or so back, I promptly snatched it up.

Hasbro has done a number of these multi-packs for the Marvel Universe. I’ve looked at both versions of the Fantastic Four set, and the packaging here is the same general idea. The set includes Starlord, Drax the Destroyer, Groot as a sapling, and Rocket Raccoon. The figures come in a nice window box that features awesome character art and shows off the goods quite well. The package is also totally collector friendly, which is cool because my MU shelves are getting so cramped that I have been storing all my multi-pack figures in their boxes.

Let’s go ahead and start with Starlord. He’s a really cool figure and quite impressive considering that he’s almost a complete reuse of the AIM Soldier body, which was also repurposed for Ghost Rider. The only new sculpting here is the belt, which is sculpted to include the bottom part of his tunic, a new collar, and naturally a new head. I’m pretty pleased with the head sculpt that packs an awful lot of detail and a rather complex design into such a small scale figure. The combination of military style helmet and mask fits the character perfectly and looks cool doing it. His hands are sculpted to hold each of his detailed… machine pistols? Well, that’s what they look like to me. I can’t place them… maybe they’re just reused, but they don’t look bad in the figure’s hands.

But I think it’s the paintwork that really makes this figure stand out. The bulk of the uniform is blue, with a slight wash that I could have done without, but the red piping looks snazzy as all hell and the glossy black used for the belt and boots, coupled with the gold for his chest emblem and helmet ornamentation really wraps the whole thing up. 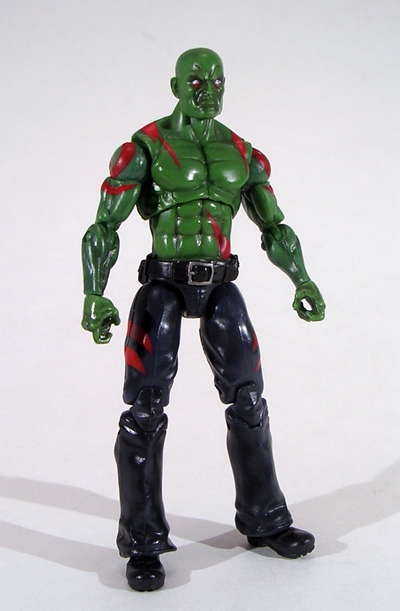 Next up is Drax the Destroyer, whom we last saw in the larger Marvel Legends format. Again, Drax recycles a body, this time the one used for Absorbing Man and modern Luke Cage. It’s a shirtless buck with trousers and it fits the character perfectly. There’s a newly sculpted belt hung around the waist, which includes two slots in the back so he can sheathe his two combat knives. That was a brilliant and unexpected touch! The grim head sculpt is perfect. I love the scowl, particularly the nose. Drax’s paintwork is about what you would expect. He has dark blue trousers and green skin, with a modest wash to it. All of his red tats are present, although they don’t quite come off as vibrant as they do on the Legends figure. Still, not bad for a guy in this scale. 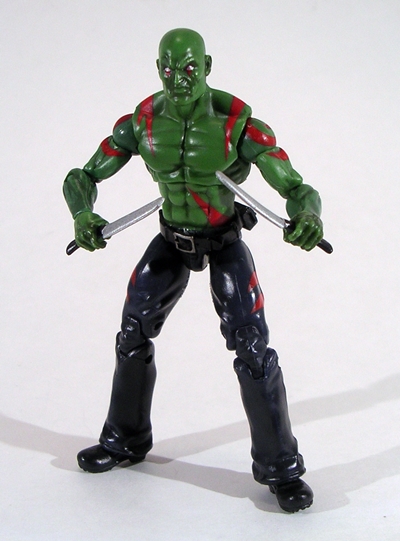 Drax’s articulation is a tad more limited than Starlord’s. Here you get ball joints in the neck, shoulders, and hips. The arms feature swivels in the biceps and wrists, and hinged elbows. The legs feature double hinges in the knees and hinges and swivels in the ankles. The torso has the ball jointed ab crunch. What’s missing? The waist swivel and the thigh swivels.

The critters of the set include Rocket Raccoon and Groot. Groot comes in his tiny sprig form, crouching in a tiny terra cotta planter. He’s an absolutely marvelous sculpt for such a tiny guy, but try not to sneeze when you’re holding him or you’ll lose him. Honestly, I’m not too upset that this little guy is all we got. With a GotG movie on the way, I’m sure we’ll see a proper Groot figure, either as part of MU or part of a separate movie line. My opinion on Rocket Raccoon is a little divided. On the one hand, it really is a hell of a nice sculpt with some excellent paintwork. Well, apart from the stray red mark on his eyebrow. I noticed that in the store, but it was the only set they had, so I had to go with it. On the other hand, I was at least expecting some basic articulation like swivels in the shoulders and hips. As it is he’s a totally static piece designed to hold his removable gun out in a “come get some” kind of taunting stance. I do really like his gun, complete with what looks like a missile on the top and a tiny little raccoon-sized bayonet. 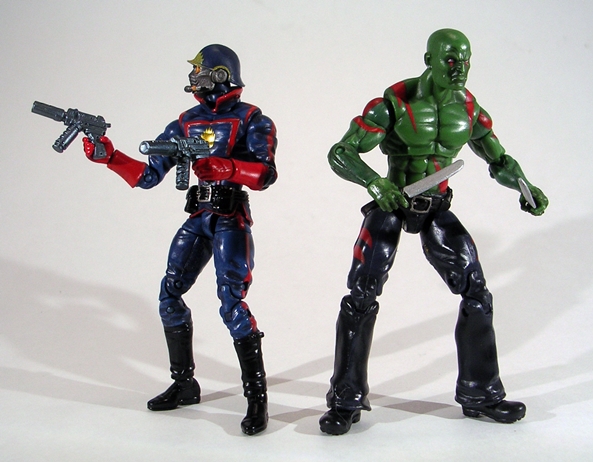 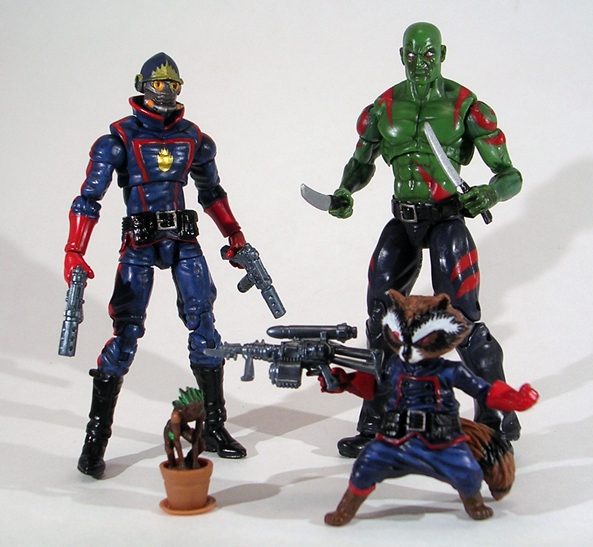 The going retail for this set is about $20, which is the same as the Fantastic Four and other MU multi-packs. It does seem a little bit steeper here, since you are only getting two full figures, instead of three, and both of which feature some heavy parts re-use. That having been said, I’m not going to argue with parts reuse when it’s done this well. Besides, this is certainly a niche set even by Marvel Universe standards and frankly I’m amazed to see something like it land on Big Box toy shelves, when by all logic it should be relegated to comic book and specialty shops. Oh, but then there’s that big movie release pending, so who knows, in a year or so we could see all kinds of Guardians of the Galaxy toys flooding the shelves. Wouldn’t that be something?