Seems like I can’t go a week without adding more Transformers to my collection, and I’m not complaining about it. The Fall of Cybertron figures have been hard to find around these parts, and I thought for sure I’d have to hunt Grimlock down online, dip into my booze fund, and pay scalper prices. Luckily, I spotted one lone Grimlock on the shelf at my local Target and scooped him up right away. Early production photos of this figure left me a little cold, but I’ve been asking for a Voyager version of Grimmy ever since the disappointing Classics release, so I had to at least give him a chance. 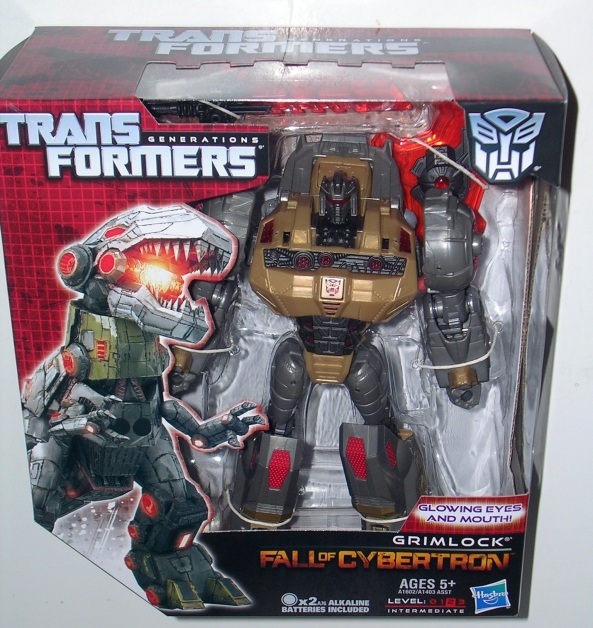 This is the first time I’m seeing the Generations Voyager box and at first I didn’t know what it was. The familiar G1-style grid seems darker than the cards, but I really dig the artwork and the complex die-cut pattern around the window is beaucoup stylish. I am getting weary of the pointless corner cut-outs and it seems even more awkward when it’s on the bottom of the box. None of that matters, though, because I have no room to save these boxes, so I gleefully shredded it to pieces in order to get at my figure. Grimlock is packaged in robot mode, but we’re going to start out with his dino mode.

There’s a lot of good and bad in Grimlock’s T-Rex mode. Let’s start with the good. The sculpting is impressive and the coloring is good. I don’t feel the sense of cheap cuts that Hasbro seems to be making with so many other figures in this line. Grimlock is loaded with panel lining and the red mesh paint apps on the panels scattered around his body really make the figure pop. The grey plastic Hasbro used looks fine, and while I would have preferred something a little more vibrant for the gold, it looks ok. Even Grimlock’s play gimmick is cool. Push the lever on the back of Grimlock’s neck and his mouth opens and his eyes and mouth light up with one of the most powerful LED’s I’ve ever seen in a toy. It’s so much better than the crappy light up effects in the Prime toys. All these things add up to a cool looking alt mode.

Ok, so now for the bad stuff. Grimlock’s dino mode is very hollow. Unless I’m looking at him from the top down, I can’t ignore the cavernous hole in his chest. Next up, his tail is awkwardly proportioned and has zero articulation. Finally, the upper parts of his legs are static, and this has to do with his transformation because they peg into place. You can bend his legs at the knees, but his upper legs stay locked in place, and that’s a big letdown. At least his arms are ball jointed. Any close look at his dino mode makes it clear that Hasbro favored the robot mode over all else. Grimlock probably stays in his alt mode more than almost any other Transformer, so making these kinds of sacrifices on his alt mode are rather suspect.

My biggest complaint with Classics Grimlock was that Hasbro seemed to go out of their way to change his transformation from the original G1 toy and the result was quite alienating. This version returns to the roots of the G1 transformation, but still manages to muck things up a bit. The thing about G1 Grimlock is that he worked great in both robot and dino mode because of his simple and clever transformation. In spite of being a Transformer, he was a great action figure in both modes and that was certainly a rare thing for a TF back in those days. I would argue that you could take the G1 Grimlock design, make just a few tweaks to improve proportions and articulation and come away with a perfect figure. No need to reinvent the wheel here, Hasbro. Fall of Cybertron’s Grimlock comes close, but then strays away by doing things like making the legs peg into place in dino mode and overcomplicating the conversion of the tail into the legs. Still, at least this version doesn’t have a split dino head for feet, because that was never  the Grimlock that I know. 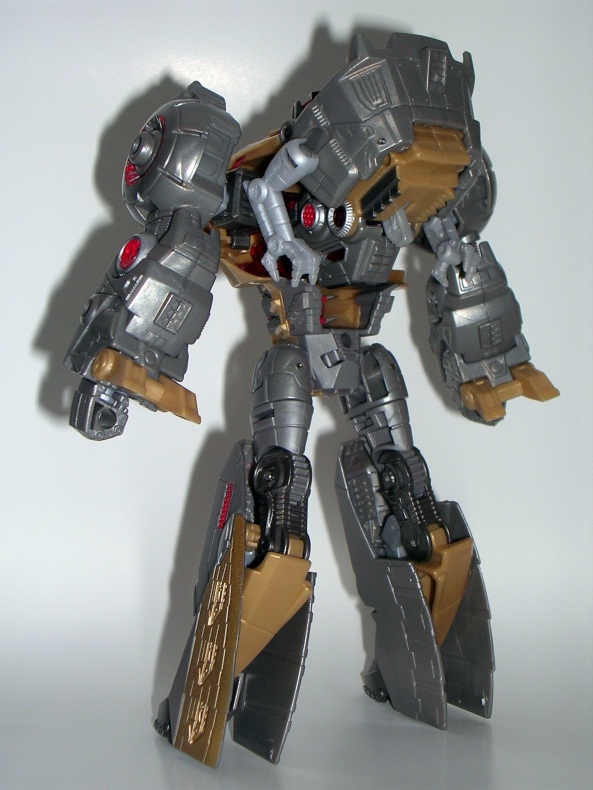 And then there’s the robot mode, and this is where the figure truly shines. He’s perfectly proportioned with a hulking upper body, beefy shoulders and sturdy legs. He hits all the points of his G1 design, with the dino head worn as a backpack and his dino feet claws protruding from his wrists. I do kind of miss the wings he had in the G1 toy, but you can still angle the dino arms up if you want to get something a little closer to that aesthetic. The head sculpt is pure Grimlock with some excellent light piping. He’s replete with panel lines and major machinery detail sculpted into his chest and around his neck. The light up gimmick still works in this mode, this time lighting up his chest.

My other big issue with Classics Grimlock was his size. Grimlock should never be a Deluxe and that problem is certainly solved with this release. Even in the G1 cartoon he was significantly taller than Optimus. This version of Grimlock scales nicely next to my War for Cybertron Prime. Some may say he’s a little too big, but I think he’s just right.

In robot mode, Grimlock features great articulation. His head is ball jointed; his arms rotate at the shoulders and have some lateral movement as well. The elbows are hinged and there are swivels in his biceps and wrists. He legs are ball jointed at the hips, his knees have solid ratchet joints, and there are swivels in his thighs. A waist swivel would have been nice, but what we got is pretty good. 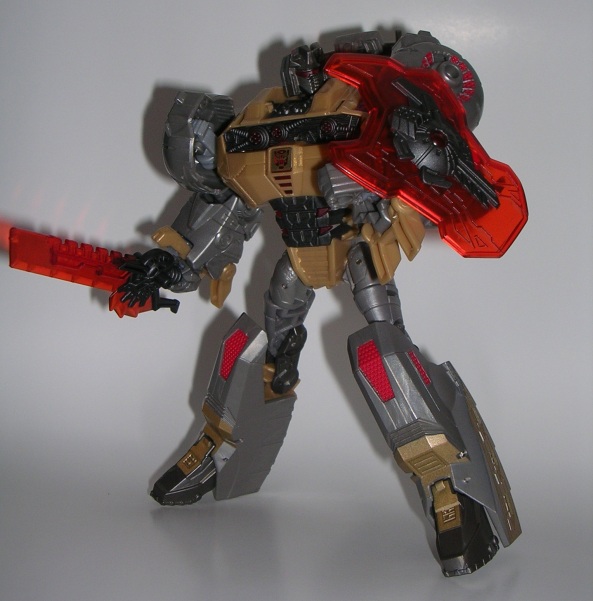 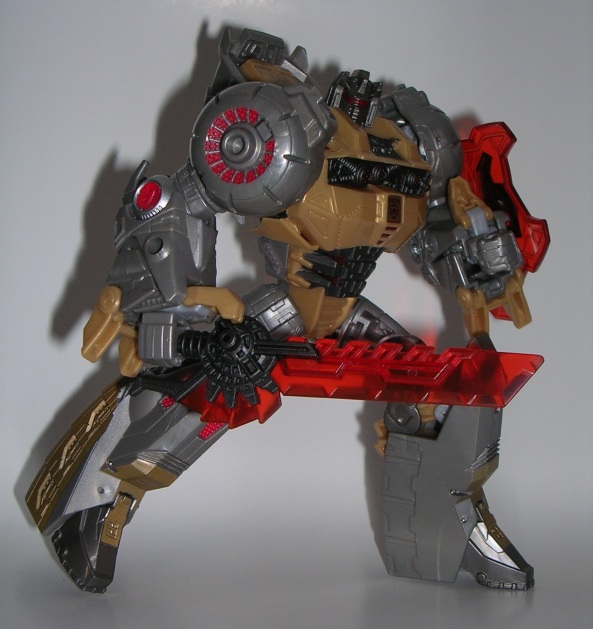 Grimmy comes with two accessories. You get the energon sword and shield he used in the game. Both are extremely nice pieces. I usually prefer guns with my Transformers, but in this case, the accessories fit the character and he looks great holding them. The only downside is that they don’t store anywhere on him. With all that hollow space in his dino chest, you’d think he could have found a way to store his weapons up there.

When all is said and done, me like Fall of Cybertron Grimlock. Grimlock no bozo, Grimlock is king. Sure, there are plenty of things I’d rather Hasbro had done differently and there were sacrifices that I feel didn’t need to be made. Still, the near perfection of his bot mode makes up for a lot of the unfortunate things about his dino mode. Fans of Grimlock haven’t received a whole lot of love from Hasbro over the years, so I think this release should go a long way to scratch that itch. Plus, he never gets tired of me telling him about the petro-rabbits.

2 comments on “Transformers Fall of Cybertron: Grimlock by Hasbro”