In honor of the forthcoming Iron Man 3 movie, Hasbro has hijacked a wave of Marvel Legends to produce six Iron Man themed figures. Actually, they’re coming out in two small waves of three figures each, but collecting all of them will give you the parts needed to construct a comic version Iron Monger BAF. I was quick to roll my eyes at the thought of more Iron Man figures in the Marvel Legends line, but then I saw the actual Iron Man 3 figures that Hasbro released. Yeah. Considering how unbelievably shitty they look, getting some Iron Man loving in Marvel Legends seems like a nice bone to throw to the collectors. I haven’t committed myself to buying all of these yet, but I couldn’t resist grabbing Iron Patriot when I saw him in the toy aisle the other day.

The packaging is a hybrid of Marvel Legends and Iron Man 3. Although it still retains the “Legends” moniker on the bubble insert, the top of the cards read “Iron Man” and it features an illustration of that terrible new Mark 42 Armor. It also includes the “Avengers Initiative” emblem, which suggests a tie in to the movie-verse despite the comic book nature of this figure. The back of the card shows the figure in photo and in illustration and has shots of the other two figures from the first half of the wave with the final three blacked out. All in all, I think the presentation here is good, even if the BAF part overshadows the actual figure. Let’s bust him open and check him out… 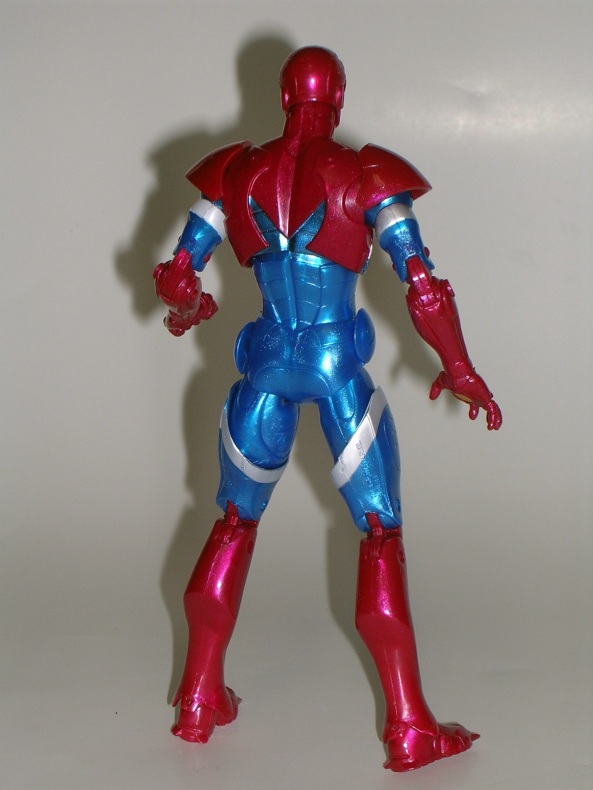 But wait? Haven’t we seen this figure before? Yes, he’s a repaint of Extremis Iron Man from the initial wave of the Marvel Legends relaunch with a slight resculpt to the chest. That was a figure that underwhelmed me enough to make my Biggest Disappointments of 2012 list. Why buy him again? Well, partly because I do love me some Norman Osborne and Dark Reign, and partly because… well, it’s amazing the difference that a nice paint job can make. The quality of the paintwork was one of my issues with the original figure, while the size and articulation were the others. At least this figure corrects one of those problems. 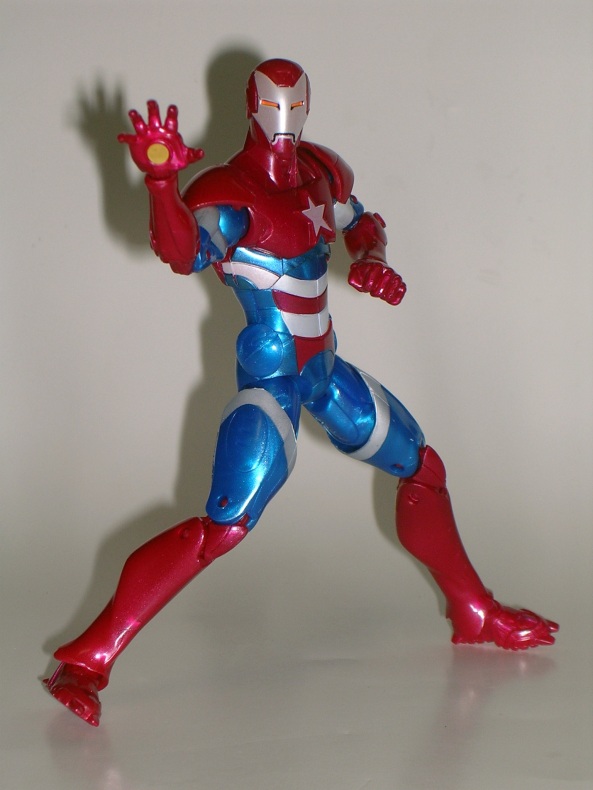 I’m still underwhelmed by the lack of panel lines and detail in the sculpt. I like the overall contours of the figure, but it still seems rather bland for a 6-inch scale piece. Besides the resculpted star on the chest, Iron Patriot also features swapped hands from the Extremis figure, where the right hand is now opened to show the repulsor in the palm and the left hand is now partially closed into a fist.

Obviously, the big difference here is the paint. I’m always a sucker for the Iron Patriot deco, and Hasbro has done a fairly good job with it here. The metallic blue used on this figure is gorgeous, and I’m also pretty fond of the pearlescent white. The red is a little inconsistent. It has a nice metallic finish on the lower legs and upper chest, while the effect on the forearms and shoulder armor isn’t quite as brilliant. Still, I’m nitpicking here, overall the paintwork is a solid effort and I’d say an overall improvement in quality over the original.

Despite fresh paint and a little tweaking to the mold, Iron Patriot has the same articulation as Extremis Iron Man. It’s important because one of my major issues with this mold is the hip joints. I’m generally not a huge fan of Hasbro’s ball jointed hips, but they’d be welcome compared to what this guy’s packing. While you can still achieve a fairly wide stance, the forward and backward movement of the legs is inhibited by the sculpt. And the wide stance doesn’t help a lot with no ankle rockers. Granted everything else is pretty good. There are ball joints in the neck, shoulders, wrists, and chest. The elbows and knees are double hinged, there are swivels in the biceps, thighs, and ankles, and the neck has an extra hinge to look up. I would have added a waist swivel too, but nobody asked me.

Iron Patriot doesn’t come with any accessories, but you do get the big torso for Iron Monger. I wasn’t really chomping at the bit to build this guy, but I have to say I’m impressed with the paintwork and sculpt on the torso. Maybe just enough to change my mind.

I picked up this guy for around $15 and it certainly beats the inflated priced I’ve had to pay when hunting down some of the other Marvel Legends figures. I still have issues with his articulation, and I still think he’s undersized. That having been said, I’m still happy to have him on my shelf. As mentioned earlier, I haven’t decided on whether or not I’m going for this whole wave in order to build Iron Monger. I guess that’s going to depend on how many I can find on the pegs or whether I would need to hunt them down. Either way, this is a solid, albeit not spectacular figure.