How about a little more Star Wars for the week? Today we’re checking out Hasbro’s AT-ST from the Vintage Collection. This vehicle was originally released way back in 2009 as a Walmart Exclusive and then got repacked and re-released last year as a K-Mart Exclusive. Fun fact… There are no K-Marts left in my area, they’ve all closed down! The nearest one is about an hour away and going in there is really depressing. It’s seriously like some kind of sad, soulless retail gulag stuck in the 70’s. I try not to go there. But all that is beside the point because I bought mine from Amazon and it even qualified for free Prime shipping. EAT THAT, K-MART EXCLUSIVE!!!! A WINNER IS ME!!!! I was tempted to pick up the AT-ST Driver two pack as well, but then I figured I’m perfectly fine having it piloted by regular AT-AT drivers. If they’re qualified to operate a full blown AT-AT, seems like driving a chicken walker should be child’s play. I’ve been meaning to grab one of these for a long while now, and I’m pretty excited to get it open and check it out! 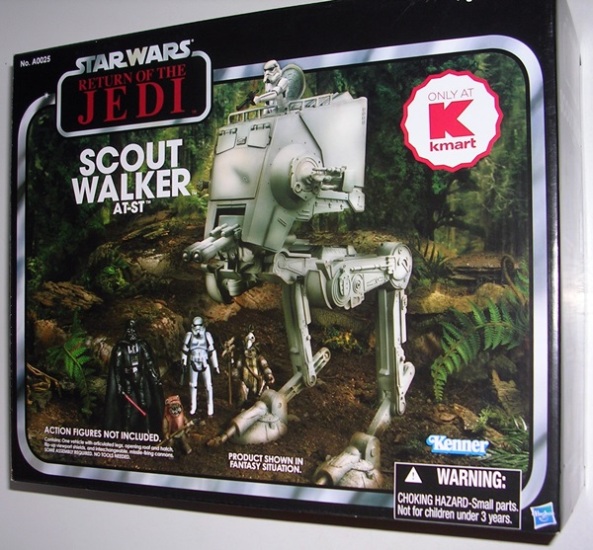 Obviously, I’m a big fan of the Vintage Collection packaging. How can you not dig this? It’s just gorgeous. Although I’m not quite sure what’s going on with the scene. It looks like Vader is prodding Wicket with his lightsaber under the feet of the AT-ST in some kind of sick war atrocity game. “You’re next, Logray!” One side has the huge ugly K-Mart Exclusive medallion, and that sucks, but thankfully the other side is the same image only clean, so the box will still display well from one side.

Inside, you get a cardboard tray, an instruction sheet, and a bunch of chicken walker parts. Yes, assembly is definitely required, and I was very worried that once assembled, this thing was never going to go back in the box. Indeed, most of the vehicle is designed to not come apart again, but you can still easily separate it into two halves and once that’s done, the AT-ST will fit comfortably back into the box for storage. I don’t have room for this on my shelves right now, so being able to keep it in the box is a huge appeal here. While there are some stickers, they are already applied, so all you need to do is snap this thing together and you’re ready to go stomp some Ewoks into goo. 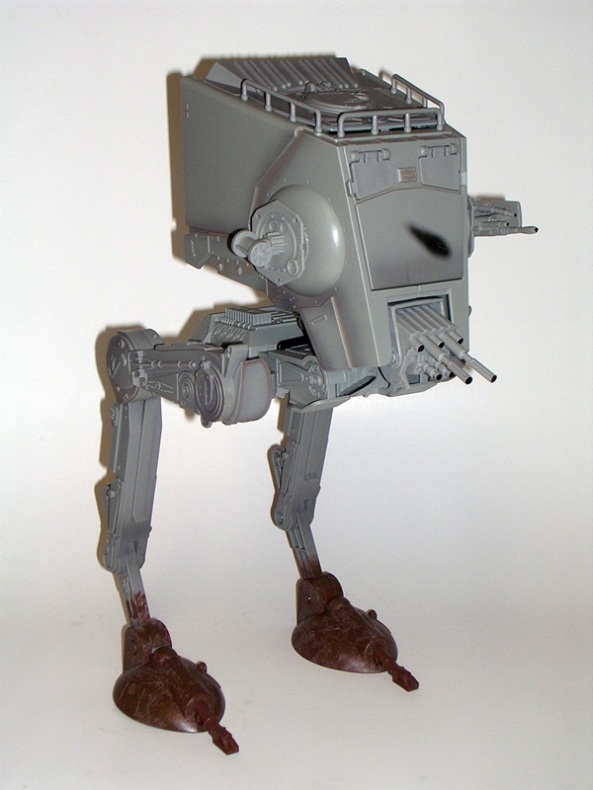 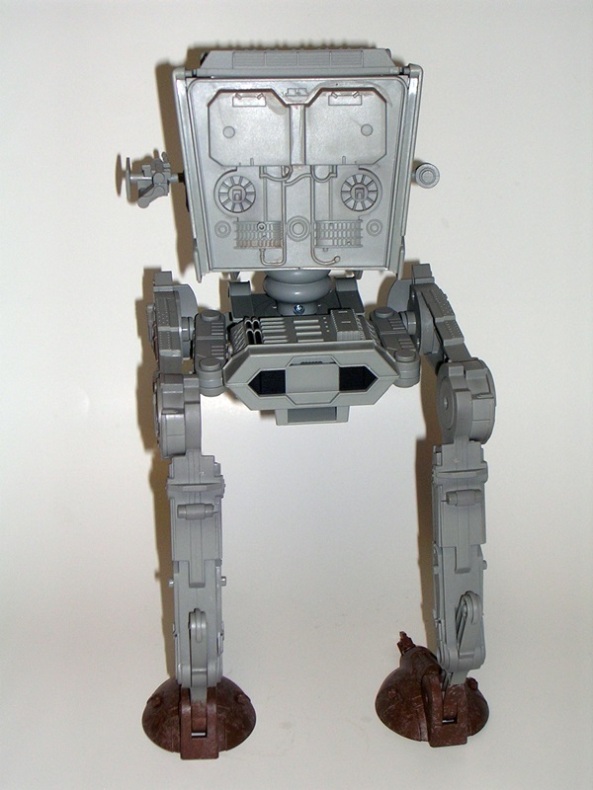 It’s been a long time since I owned the original Kenner mold of the AT-ST, but even without an eyeball comparison it’s pretty easy to see that this new version is bigger. It’s still nowhere near to being in proper scale to the 3 ¾” figures, but like the BMF Falcon and AT-AT and the Battlepack Slave-1, I find it to be a happy compromise between toy and scale model. I have, however, hunted down some pictures of the original Kenner toy, and I have to say I’m surprised at how much sculpted detail Hasbro seemed to drop from this newer toy. Isn’t it supposed to be the other way around? I see a big difference in the detailing on the back of the head and the legs and actually prefer the vintage version’s detailing over this one. My guess is that Hasbro had to take some liberties with the legs on this thing to make them strong enough to hold the increased bulk, but it really messes with the aesthetics. This AT-ST has cankles… CANKLES!!! Why does it feel like everything has to be a compromise? Now, that’s not to say this toy is all bad… let’s see what she’s got, and we’ll start from the top and work our way down…

The biggest draw about this new version for me was hearing that it could actually seat two figures. The interior of the cockpit is pretty simple and relies mostly on stickers for detail. The cockpit is pretty cramped and I had my doubts it would be roomy enough for two, but even my less than super-articulated Legacy AT-AT Drivers could both fit inside fairly well. Still, I would not want to take this on a long trip across Endor and have to share that cabin. 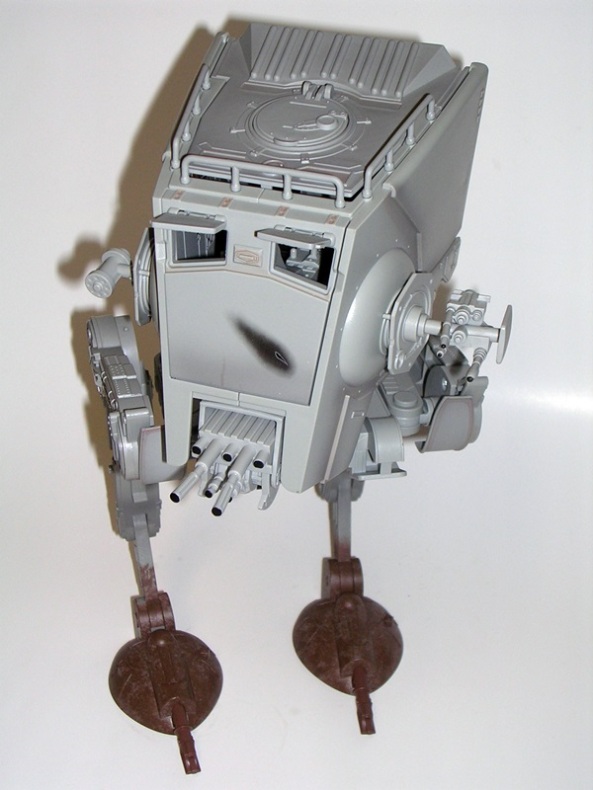 Outside, the head now features two opening viewports on the front and an actual guard rail up top. As with the Kenner version, the top has the screen accurate hatch that opens, plus the entire top is hinged to open to get better access to the inside. The side weapons consist of a gun and what looks like a missile pack or grenade launcher, which I vaguely recognize from playing some Star Wars game with an AT-ST in it. Both weapons rotate 360 degrees. 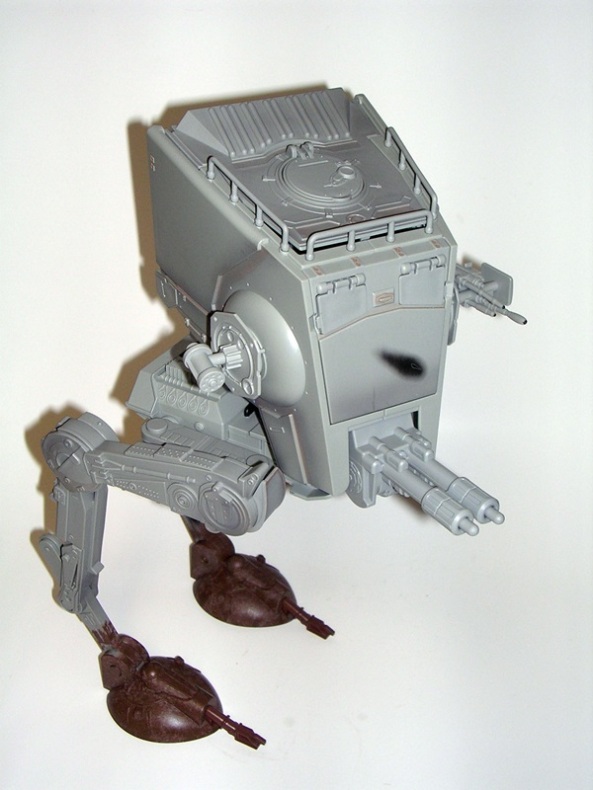 You have two options as to how you want to outfit the chin gun. You get a regular gun cluster that looks more film accurate and you get a set of firing missile launchers, which will likely appeal more to the kiddies, or at least that’s Hasbro’s intent. It’s a really cool idea to give us the choice. The missile launchers don’t look nearly as bad as I thought they might, but I still prefer the regular gun package.

The construction of the legs is completely different from the old Kenner toy. Gone is the goofy walking gimmick and in its place is an extra articulation arm that really gives the AT-ST a lot of poseability more akin to what was seen in the films. Remember that scene where the AT-ST was freaking out and trying to keep its balance on top of the logs? This one can pretty much do that. It can also squat all the way down to assume a boarding posture to make it easier for the pilots to get in and out.

Unfortunately, the new legs are poorly designed for the one thing you will need them to do most of the time.. standing. The ankle hinges and the next set of hinges up are pretty strong ratchet joints. The actual knees, on the other hand, aren’t ratchets and they are in no way suited to hold the toy’s bulk. Why Hasbro didn’t make these ratcheting joints as well is beyond me because they seriously compromise the toy. I even tried over tightening the screws and it didn’t make a difference. There are some sweet spots, where I can get this thing to stand, but it will still collapse at the slightest provocation.

The AT-ST’s deco isn’t all that great either. The paint on the legs look like this thing has been wading through piles of Ewok shit. I was not a big fan of the muddy feet on Hasbro’s Endor AT-AT and I’m not liking it much here either. There are a few other ham handed attempts at weathering and distress, but none of it looks that good and it’s inconsistently placed. It almost looks like they started doing it on the front, decided it didn’t look so good and just stopped.

I’ve waited a long time to get this thing and in the end I’m rather disappointed. It looks decent enough on the shelf with some figures around it, but getting it to stand is a total bitch, all because Hasbro couldn’t be bothered to outfit it with an extra pair of ratchet joints. I’m not happy with the deco and it looks like its lacking a lot of detail from the original Kenner toy, particularly on the back of the head and the legs. At $25, I’m not completely sorry I bought it, but that’s a good ten bucks less than the MSRP, and quite frankly I was hoping for something a lot better. I was originally planning to get out a whole bunch of figures and have a blast shooting pictures, but I got frustrated pretty quickly and decided to move on to other things.