I started my tribute to the new Trek film a couple weeks ago with a look at Playmates’ hand phaser from the 2009 movie series, so it seems only right to end Star Trek Week with a look back at The Original Series phaser. In terms of my own personal favorites, this original piece of Starfleet hardware is second only to the awesome design featured in the otherwise shitty fifth movie, The Final Frontier. Were they used again in Undiscovered Country in the infamous mashed potato attack scene? I think so, but I can’t remember for sure. I’m actually going to be doing a dual feature comparing the TOS phasers made available by both Playmates and Diamond Select. Phaser vs Phaser… FIGHT! 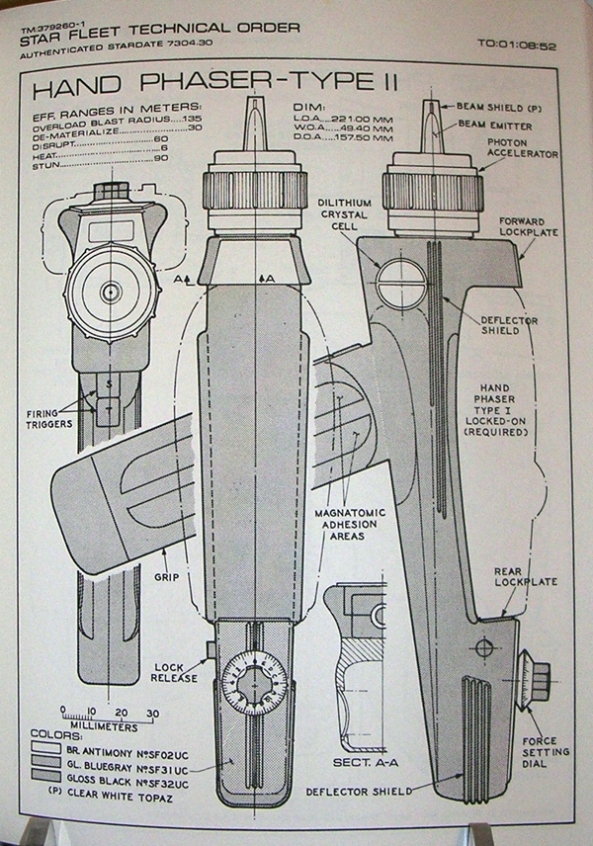 No package shot, because I’ve had these things for what seems like forever, but since I’m likely to get a little techno-babbly, I am including two pages from my trusty Starfleet Technical Manual as reference for the anatomy of a phaser. I first bought the Playmates one to replace an actual resin and metal prop phaser that I bought at a Trek Convention back in the late 80’s. I had to sell that one off because I was in need of monies for college, or some other stupid thing, and I had a ridiculously high standing offer on it from a friend of a friend. It killed me to sell it, but them’s the breaks. Anyway, I was never totally happy with the Playmates release, so when Diamond Select offered their version some time later, I was quick to pick it up. 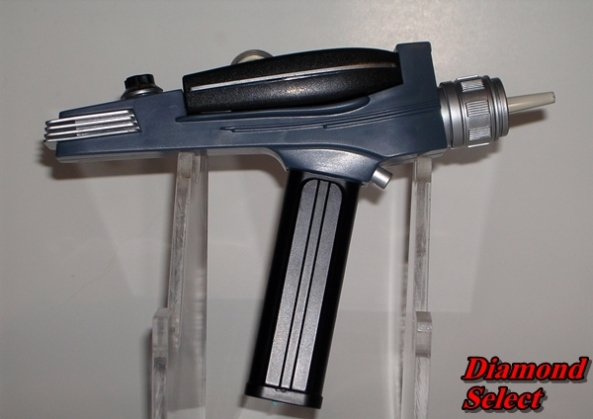 First, let’s talk scale… both phasers are close to the proper feel for an adult hand, but the Playmates version is actually quite a bit chunkier than it should be. It’s not only the overall dimensions that are skewed, but the sculpted, “Type 1” phaser also looks a lot bigger than it should be. Now, if you just happened to be holding the Playmates version, the extra girth might not be readily apparent to you. It’s not that bad and it feels ok in the hand. But, if you compare it side by side with the properly scaled Diamond version, you can clearly see the difference.

In terms of sculpted detail, both phasers hit all the right points Both have nice looking translucent beam emitters with adjustable photon accelerators. Both pieces do a good job of replicating steel finish for the accelerators. The beam shield is a bit stubbier and thicker on the Playmates version, but it still looks fine. Both models feature an adjustable Dilithium Crystal Cell, although the Diamond one actually serves a purpose for the SFX, whereas the Playmates version just turns. Both have painted deflector shielding on the sides and rear. They both look good, but I prefer the Diamond a bit more, mostly because it fans out of the back in the proper fashion. Both pieces have exposed screwheads on one side, the Diamond has one on the top and one in the handle, the Playmates phaser has three in the top and one on the handle. The other big difference is the Type 1 phaser on the Diamond version is properly textured, whereas the Playmates one is left smooth.

Moving to the top down, it’s now worth pointing out that the Type 1 phaser in the Playmates version is sculpted on, whereas the Diamond one is actually removable. Obviously, this is a pretty huge difference. The Playmates version uses stickers for detail on the force indicator dials, and mine have long since fallen off. The Diamond version uses a printed paper sheet under the translucent piece and sculpted numbers and hash marks on the dial. Both look very nice. The Type 1 phaser on the Playmates version has somewhat unsightly speaker holes on the electron aspirator pile, and the trigger is just a sculpted piece, whereas it is a clear piece on the Diamond version. Both Type 1 phasers are missing the operational light between the force setting wheel and the force indicator dial, something that my prop did actually have.

The electronics are about on par with both pieces. My batteries are drained on both so I’m going from memory here, but each phaser had different sounds for different settings. The Diamond version has working electronics in both the regular rig and the removable Type 1. I don’t recall having any issues with the sound on either piece.

I’ll freely admit it isn’t really fair to compare these two pieces. The Playmates version was more of a mass market roleplay toy, whereas the Diamond version was designed more with collectors in mind. As a result, the Diamond release clearly comes out on top across the board.  That having been said, neither version is anywhere near on par with my old prop phaser, but both have their merits. The Playmates phaser can often be had for under $20, and all it needs is a patch of velcro to make it an excellent cosplay piece that can take a beating while wandering the hotel lobby drunk out of your mind. Of course, the Diamond version can usually still be had for under $40, and it’s clearly the way to go for a better display piece or for putting together the better Starfleet ensemble. I display them both together and just use the Playmates as a slightly earlier and less sophisticated version. You know, the kind you give to Red Shirts who don’t stand a chance of surviving anyway!