In keeping with Star Trek Week, tonight I’ll be going to The Pub and taking my liver where no liver has gone before. That means I don’t have a lot of time, but thanks to some careful planning, I don’t need a lot of time today. We’re looking at Playmates’ Command Series Dr. McCoy and a lot of what I have to say about this figure was already said in yesterday’s Captain Pike feature. Still no in-package shot, so let’s just get right to it, so that I can go out and hit the Aldebaran whiskey.

McCoy was definitely a high point in the Abrams films for me. Next to Quinto, I think Karl Urban does the best job owning his original Trek character without lampooning too much. I like Pegg as Scotty, but it’s not really the same Scotty at all. He’s just too wacky for it to feel like a legitimate treatment of the character. Ironically, I would have picked up a Command Series Scotty if Playmates did one. Ideally, I would have liked to have one in each of the shirts… Command, Science, and Engineering, but poor Scotty got stiffed and there were no Red Shirts released in this assortment. Anyway… 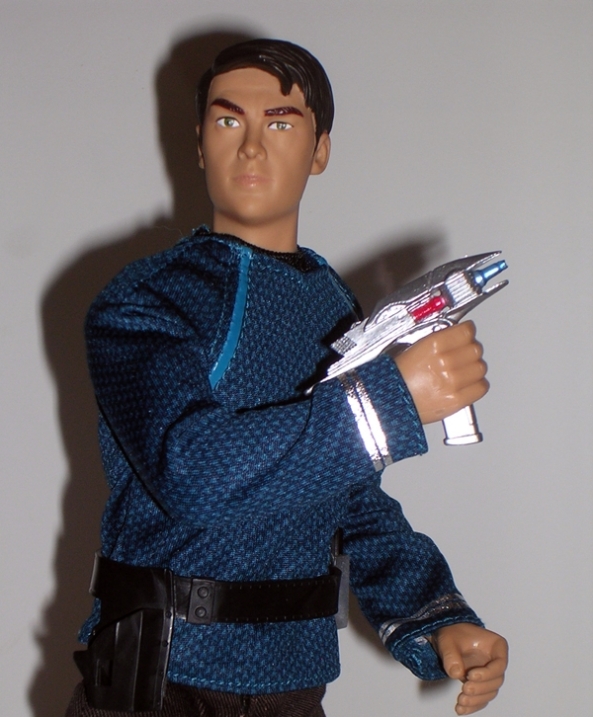 The head sculpt is about on par with Pike’s. It’s soft, it’s rather cartoony, but there’s definitely a bit of the actor in there. The paintwork is pretty solid. Again, for a mass market retail figure in this scale, this is passable work. Not great, but passable.

The shirt is the blue version of what we saw yesterday. It’s a little long in the sleeves, but it looks nice from the front and has an ugly seam running up the back where it fastens. The sleeve stripes and chest insignia are all sewn on. The trousers and boot-feet are identical to Pike’s.

McCoy makes use of the exact same body as Pike, and I presume the rest of the Command Series figures. It’s not exactly screen accurate as the barrel-chested body here seems a little bit buff for Karl Urban. That’s ok, though, as I didn’t expect Playmates to churn out a new body for each figure. 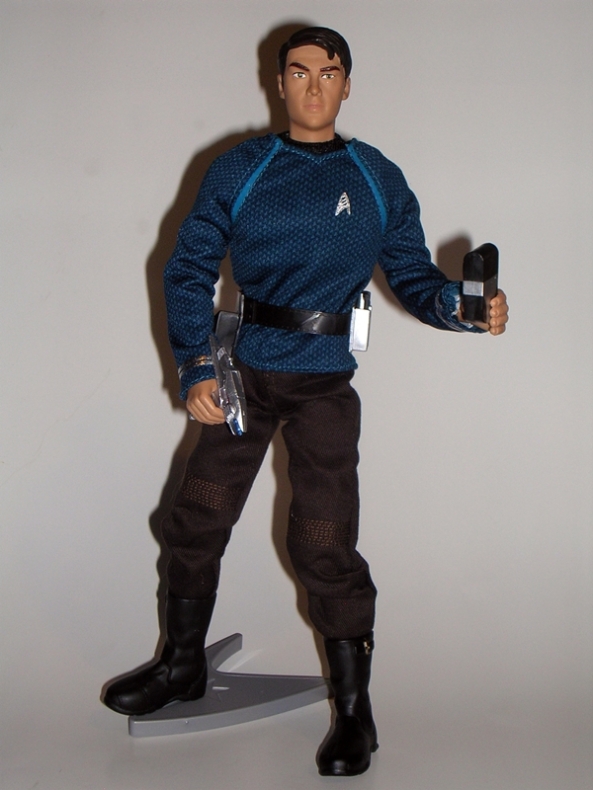 Accessories? The same? Not quite. Yes, you get the same phaser and communicator, but you also get a tricorder. Really, Playmates? You couldn’t have just tossed in the tricorder with Pike too? Another odd thing worth pointing out: The belt clip for the communicator is painted silver on McCoy’s belt, but it’s left black on Pike’s. Weird. 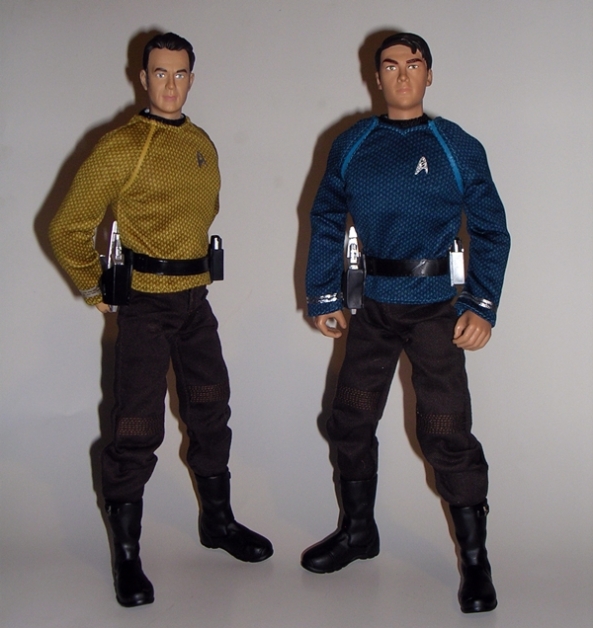 Hey, I told ya today would be fast. McCoy’s a decent enough figure for what he is, and you can still find him on clearance at a number of e-tailers. I still say we need some high end sixth-scale Trek figures, although my first choice wouldn’t be from the Abrams reboot. Now if Hot Toys would do movie versions of the Classic Crew? Yeah, I’d be all over most of them. No, it’s never going to happen, but I can dream. And with that I’m off to The Pub. I’ll catch you all tomorrow as I wrap up Star Trek Week with a nod back to the original series.