Here’s a recent acquisition that I’m really happy about. Black Cat is one of those retired Bishoujo statues that recently began shooting up in price on the secondary market. She’s nowhere near as bad as Rogue or Batgirl or even Jean Grey, but the last time I priced her, I was looking at just under hundred bucks with shipping. Well, last weekend whilst doing some very ill-advised drunken Ebay browsing, I stumbled upon a listing for her with no bids at forty bucks. I dropped in a bid and surprisingly enough I got her for a very reasonable price of $48 shipped. It was a bit of a gamble as the seller had very little feedback and the description was lacking, but I took a chance, and she showed up at my door like brand new. I know, it’s kind of crass to start out a feature talking money, I usually save that for the end, but I’m just so excited to have been able to pick her up at such a reasonable price I couldn’t help but doing a little crowing about it! 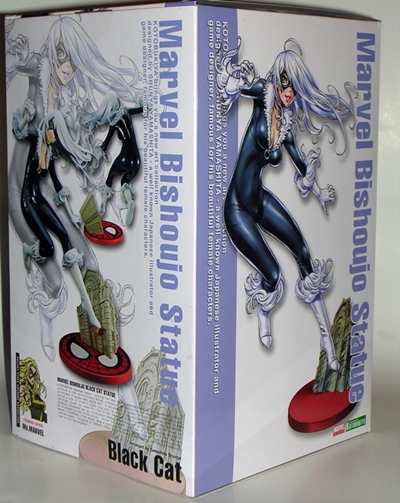 Black Cat comes in a white window box. Not a big surprise here, although, I think this is the largest Bishoujo box in my collection. Maybe just a smidge bigger then the box for Black Widow? Either way, it’s a typical package for the line. It gives you a little peek at what the statue looks like. 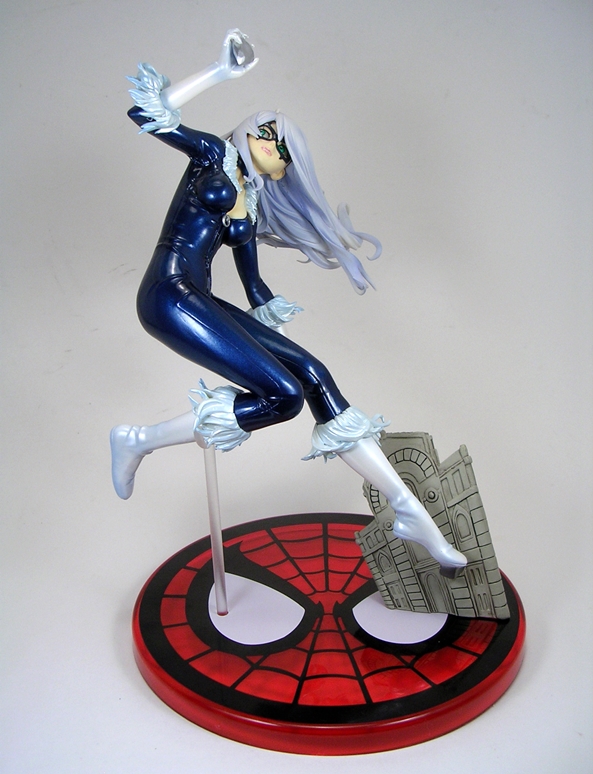 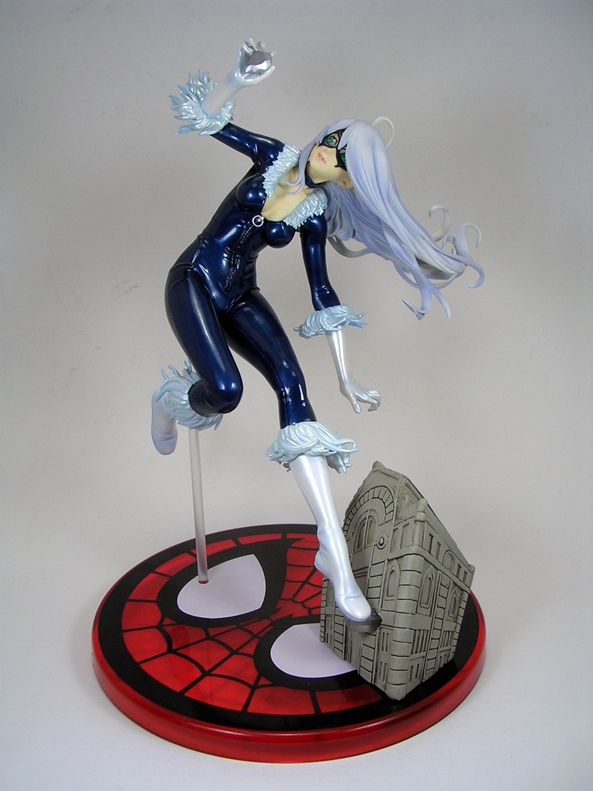 One of the coolest things about this piece is that Black Cat has one of the most dynamic poses of all the statues on my Bishoujo shelf. Every little thing about her just exudes energy and action. Thanks to some clever design work, she isn’t even touching the base, but we’ll get to more on that in a few ticks. Felicia is captured in mid leap, presumably among the rooftops of the city. She’s holding aloft her latest score, a diamond of impressive size, and turning her head up to admire it. I tend to be at odds with which I prefer more in this line: Deliberate cheesecake poses or action scenes. There are certainly strong arguments for the former, such as Power Girl, but Black Cat here is definitely a fine example of the later. I’m always impressed when a static piece can capture this much energy. 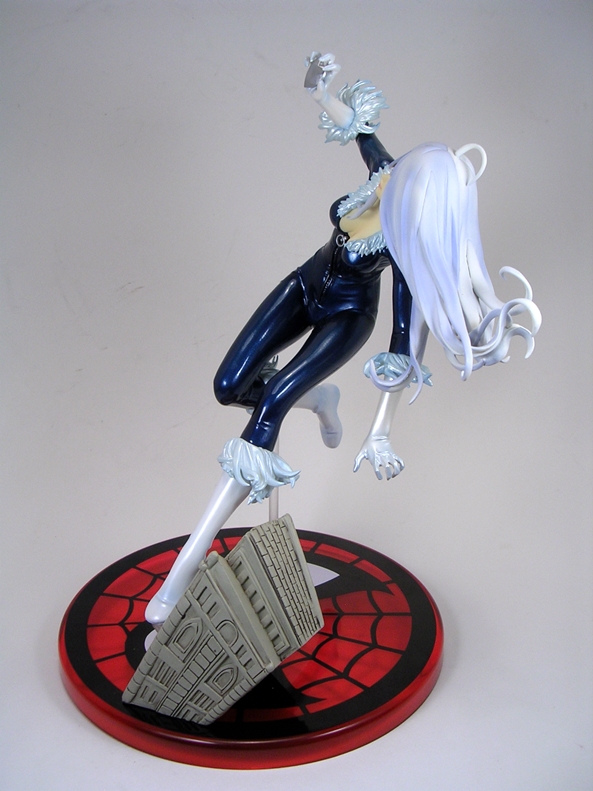 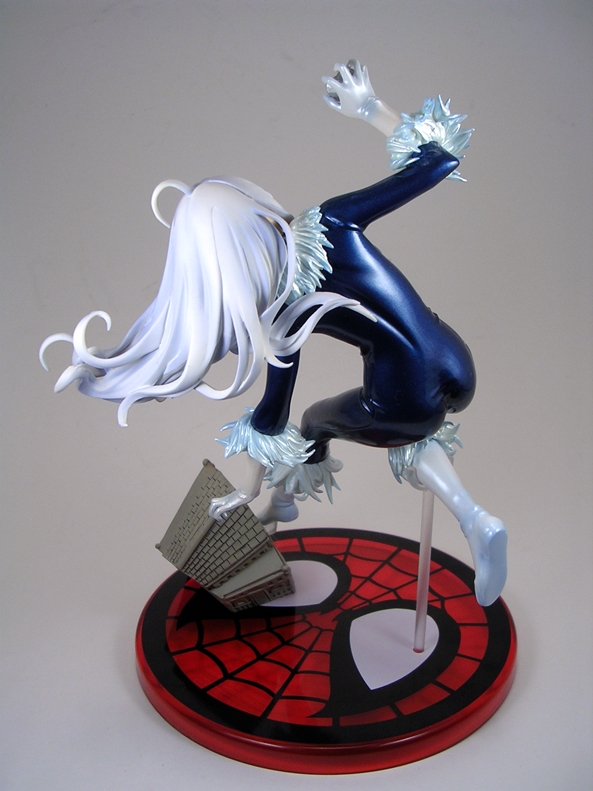 There’s no doubt that this line excels when delivering it’s femme fatales clad in tight bodysuits, and that makes Black Cat a fine candidate for bishoujo fodder. The bulk of Felicia’s costume is a beautifully iridescent blue skintight suit with sculpted seams, a few wrinkles here and there, and a zipper drawn fairly low. Her boots and gloves are reproduced in a striking pearlescent finish and capped off by her trademark fur lining. The contrast between the smooth curves of her body and the wild strands of her costume’s fringe looks splendid, and I really can’t get over how great the mix of the blue and pearl coloring on this piece works. She’s definitely a statue that demands to be displayed under great lighting to be fully appreciated. 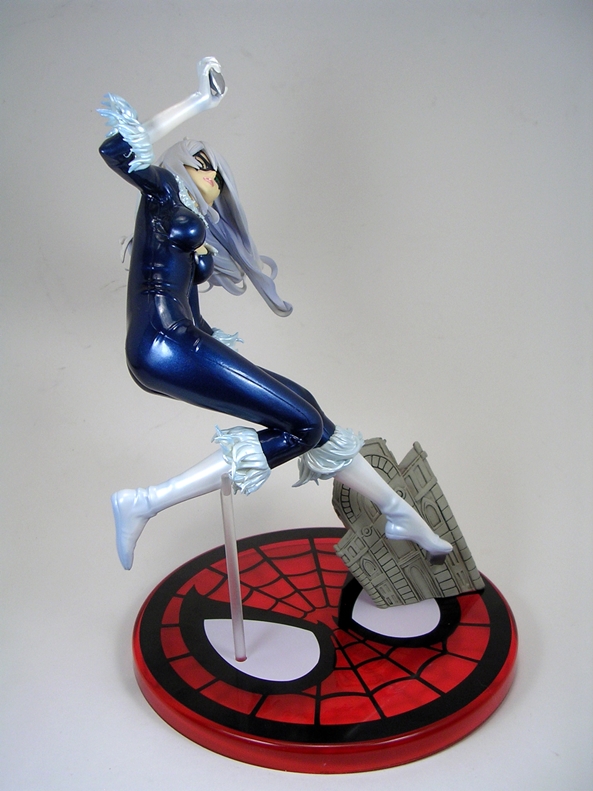 Felicia’s face is appropriately adorable, although a lot of it is obscured by her wild sculpted white hair. The expression of triumphant joy and satisfaction over her new prize is priceless. It’s worth noting that she stands out from my other Bishoujos as having what appear to be separate clear pieces for the eyes, as opposed to ones merely painted on the statue. It’s an interesting effect that gives the eyes a more glossy sheen. It’s a nifty little touch, but I think I prefer the regular painted variety. 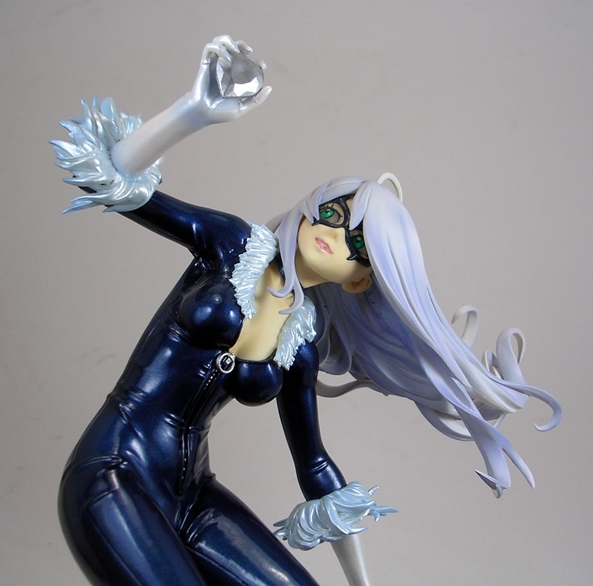 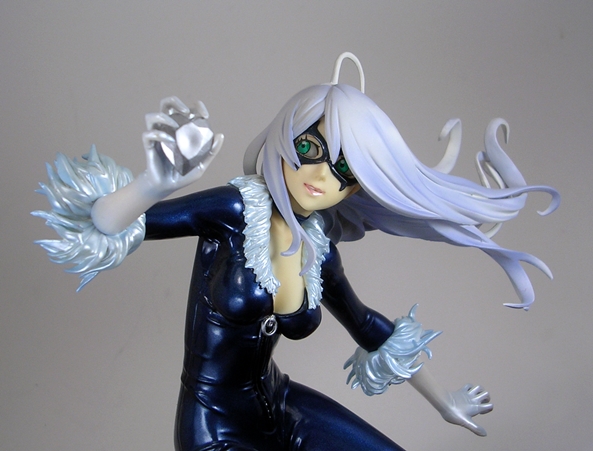 And then we come to the stand. Black Cat’s display base is a simple translucent disc painted like Spider-Man’s face. There was a time when the borderline OCD in me wished Koto used uniform bases in their Bishoujo line, but not anymore. I’ve really come to love the individualistic qualities that the unique bases give each piece and Felicia’s really stands out. There’s a stylized building on the base with a socket that you plug the clear peg in Felicia’s left foot. This suspends her over the base in mid jump. You can actually display the piece like this, but the instructions suggest you use additional support when displaying her for a long period of time. That additional support comes in the form of a clear post with a “Y” top to cradle her right leg. Before actually seeing the statue in person, I was pretty worried about how precarious this design was going to be, but it turns out that Black Cat is very stable when displayed with the extra support. No worries about warping in the plastic! 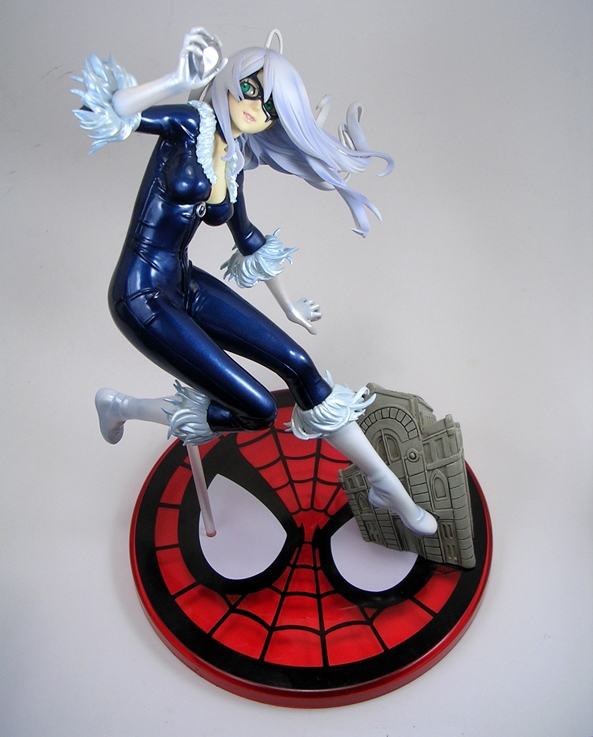 I’ve wanted this one in my collection for a couple of years now and part of me was worried that she wasn’t going to live up to the anticipation. But nope, she certainly does! I really love everything about her. Black Cat is just one of those characters that lends herself so well to statue form. So much so that I’ve often been tempted to pick up her classic Bowen statue as well. I wouldn’t go so far as to call this a “grail piece,” but I’m sure I would have eventually paid top dollar for her (as I will one day for the Bishoujo Rogue or Emma Frost… those are my Bishoujo grail pieces!), but it’s nice to know that every once and a while the stars line up just right and I can actually wind up on Ebay getting a good deal for something I’ve wanted for a while now.