When I was a wee lad I got a lot of “hand me down” toys from my uncle, which included the 1970’s Lone Rangers figures by Gabriel. Those figures were amazing and I’ve had a fascination with lawmen and gunslingers ever since. Of course, since then, I’ve became more about John Wayne and Clint Eastwood than The Lone Ranger and Tonto, but it was probably those very toys that made me the hardcore western fan I am today. With that all having been said, I have no interest in seeing Disney’s new Lone Ranger movie. It’s not a “you’re raping my childhood” kind of deal. Nah, I just didn’t enjoy the Pirates of the Caribbean movies and this looks to be more of the same only set in the Old West. Maybe I’ll check it out when it comes out on a free streaming service. Nonetheless, movie tie-in or not, I simply could not resist Lone Ranger based Lego and so I jumped on one of these sets as soon as I spotted it. I started out with the Stagecoach set because it’s one of those nice mid-range sets that give me a good feel for the line without costing too much money. A brand new line of Lego! I’m excited!!!

The packaging is very distinctive, mainly because of the yellow stripe across the top of the box. I’m not sure if they were going for a desert look or maybe old, weathered paper? I don’t know, but these sets really stand out on the shelves. There’s a big Disney logo and a head shot of the guy playing The Lone Ranger in the film. IMDB tells me his name is Armie Hammer, but I still don’t know who that is. I’m actually surprised they didn’t slap a picture of Johnny Depp as Jack “Tanto” Sparrow on the front too. Anyway, the box makes the set look crazy awesome. Let’s open it up!

Ah… Lego smell! It’s been way too long since I built a proper Lego set and I knew this was going to be fun, but I forgot how hard it is to keep the cat hair off it while building. Inside you get three numbered baggies containing a total of 279 pieces. You also get a sticker sheet, and an instruction booklet. Let’s see if I still remember how my Lego reviews work… oh yeah… we start with the minifigs!!!! The set is not stingy on the minifigs, as you get a total of five, which include: The Lone Ranger (hereafter TLR), Tonto, Jesus, Barret, and Red Harrington. Apart from TLR and Tonto, I have no idea who any of these people are, but suffice it to say Red is the lady passenger, and I’m guessing Jesus and Barret are bandits. Works for me! You also get three horses, two black and one brown, if you want to include them in the count of minifigs.

Kicking it off with our heroes… TLR doesn’t look like the character I remember, but he is a really nice cowboy minifig. He’s got a black printed suit complete with sheriff’s badge on it. He’s sporting his trademark black mask and white hat, and he’s got a pair of silver revolvers. He’s simple, but cool nonetheless. Tonto has a simple printed body and an elaborate headdress with a bird that pegs onto the top. He has two printed faces, one smiling and one surprised. He comes with a knife and a square brick with a pocket watch printed on it, which I assume has something to do with the movie. I would have liked Tanto to look like a more traditional Indian than one of the zombies from the last Pirates of the Caribbean movie, but Lego had to stick with the source material and they did a fine job with what they had to work with. 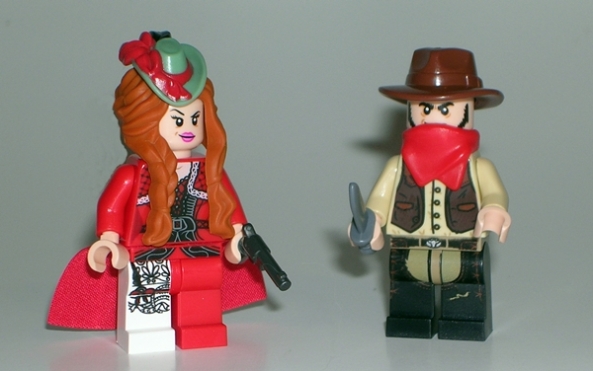 Moving on to Red and Jesus… Red Harrington has an elaborately printed dress and a clever use of a cloth cape, which when inserted between her torso and legs makes the back of her dress. It looks good, but it keeps her from being able to sit properly in the coach. She has a huge hair piece and a little hat that pegs on top. She has two printed faces, one smiling and one with the classic Lego anxiety expression. She also comes with a grey revolver. Jesus is the cowpoke in the brown vest. He’s got a brown hat and a cool kerchief-mask and is pretty stereotypically cowboy looking. I like that a lot, because I want a bunch of generic Lego cowboys. He comes with a knife.

Last up, we’ve got Barret and the brown horse. Barret is the feller in the grey shirt. The box art suggests giving him a brown hat and kerchief-mask, but I think he looks better with the extra black hat I got and sans kerchief. Again, he’s a simple, printed figure, but he looks great. The brown horse comes with a saddle that can hold a set of dynamite and a rifle. It also comes with the extra horse bricks to fill out his middle if you don’t have anyone riding him. Speaking of extra bricks, there’s a ton of extra stuff in this set, and I’m not talking about just random extra bricks like usual. You get the extra black hat that I already mentioned, an extra revolver, an extra kerchief, and an extra pocket watch brick. Ok, that’s not a ton, but they are some useful extras. I’m pretty sure I’m going to have to mix some of these bits with my Lego Police and make Space Cowboys!

Of course, the showpiece here is the stagecoach. It’s a fun build and the finished model looks excellent. I was particularly interested in how the undercarriage was constructed as that and the horses take up all the parts in the first bag. There’s a ball joint connecting the horses to the carriage, and a string for the reigns. The front wheels of the coach turn and the back wheels actually have working struts! The harness for the horses makes use of the spaces where you usually put riders. You do get extra bricks to fill them in if you want to use them as just a couple of horses chilling around without huge bites taken out of their middles, or you can have the minifigs ride them. Extra horses are always a bonus and these may find their way into my Lego Kingdoms sets from time to time.

The cabin of the coach has opening doors on both sides and it can comfortably seat two minifigs, although you can pack more in there if you aren’t particular about comfort. There’s a seat up front for the driver, a mailbag with a letter, a safe that fits on the roof, complete with silver bar inside. There’s also a play feature where by tapping the back of the coach, you can launch a briefcase out of it! Yeah, I’m guessing that’s something that happens in the movie! This thing holds together fine and rolls along really well. The stickers are well thought out as they add the lettering to the top of the sides and some ornate designs. 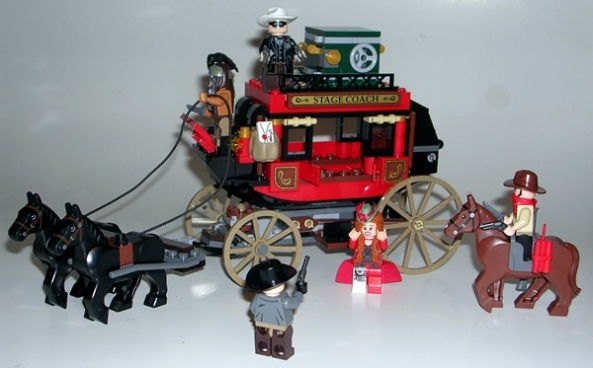 There simply aren’t enough Old West toys these days, so Lego’s Lone Ranger fills a major hole in my compulsion to own toys based off of things I love. This one was a fun and satisfying build and in the end you get everything you need for a little stagecoach robbing fun. The brick count seems right for the $30 price tag, and yet in the end the size of the coach and all the horses and minifigs makes this set seem like a better value than usual. I’ll definitely be picking up more of these sets. I’m tempted to go right for the jugular and pick up the $100 train, but more likely I’ll grab a couple of the cavalry sets next.