Argh… it’s Monday and that means I’ve only got one more day of vacation left. It’s been a relaxing week, and I’m going to pick up a special bottle tonight and get properly legless in a final act of vacation-ending defiance. But getting back on track… if it’s Monday, it must be time for a Marvel Universe feature. Let’s check out my man, Hercules!

Herc is from one of the more recent waves. Not that recent, mind you, but the fact that I’m excited to have him should tell you what MU distribution is like around here. I really dig the character art on the card and as you might expect, Hercules fills out his bubble impressively with his bulky, manliness… er, godliness.  And let’s not forget the magnificent “Comic Shot” which is surely worth the ten bucks all by itself. I joke, but 20 years from now the irony will be that MU figures with the Comic Shots will be worth hundreds of dollars, just because most people, like me, just throw them away. The back of the card has a bio blurb and shows the other figures in the wave. I’m rather anxious to pick up Nova and Angel, but I can take or leave Puck. Oh yeah, Sasquatch takes over from the likes of Deadpool, MODOK, and Rocket Raccoon, to offer the humorous collecting quip. 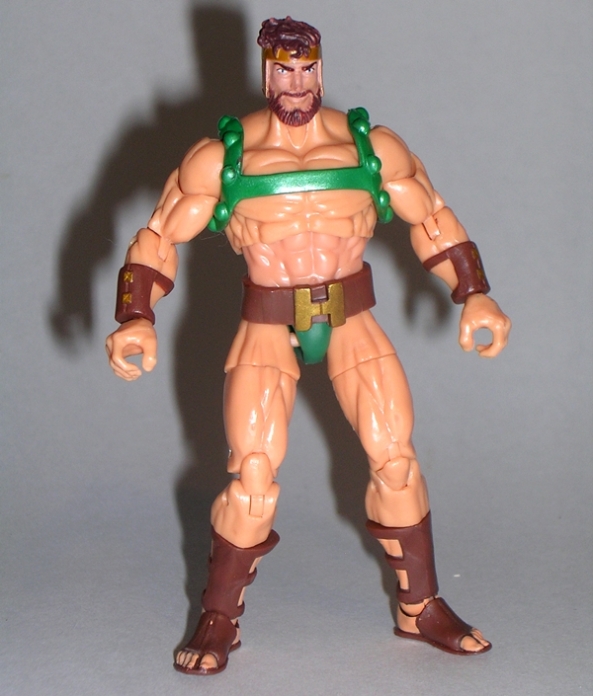 Hasbro could have easily crapped out on this guy, but check him out! I think they did a fine job, considering he’s just a nearly naked dude. This is definitely one of the coolest muscled bucks I’ve seen in the 3 ¾” scale. The muscle definition is meticulously sculpted throughout and it does indeed look impressive. Herc’s “outfit” consists of a metallic green harness, which is a separate piece, brown leather bracers on his arms, sandals, and a green pair of briefs with his trademark giant “H” on his belt. Begin you’re 3 3/4″ He-Man customs now! It all looks great and the paintwork is excellent. Thankfully, Hasbro resisted the urge to use a paint wash and went with just a clean, bright flesh tone of the plastic. The sculpt stands out fine on its own without the help of the wash and Hasbro isn’t very good at doing them anyway. Yes, Hasbro, sometimes less is more! 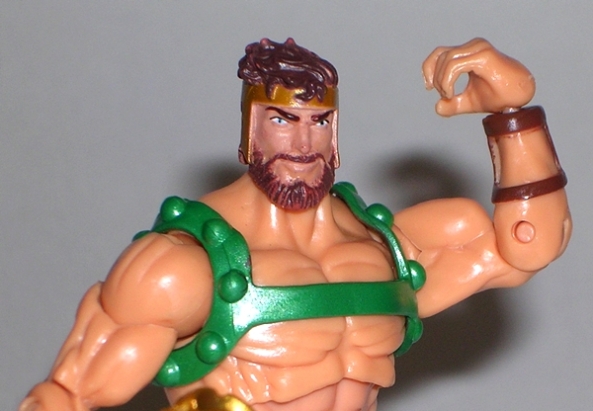 Equally impressive is the head sculpt. The hair, beard and headgear is all reproduced wonderfully and there’s a lot of personality in this tiny, little head sculpt. Herc is sporting a great, mischievous smile betraying how much he revels in action. Yup, when he kicks your ass, he’s going to enjoy it. Again, the paintwork is nice and sharp, particularly the eyes.

Hercules comes with his trusty mace. It’s a nice looking piece with a shiny gold finish and a sculpted lanyard at the handle. And of course… The Comic Shot! 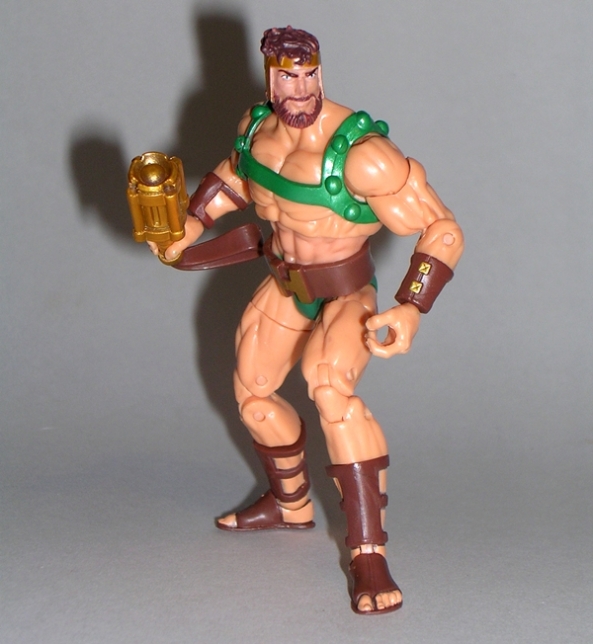 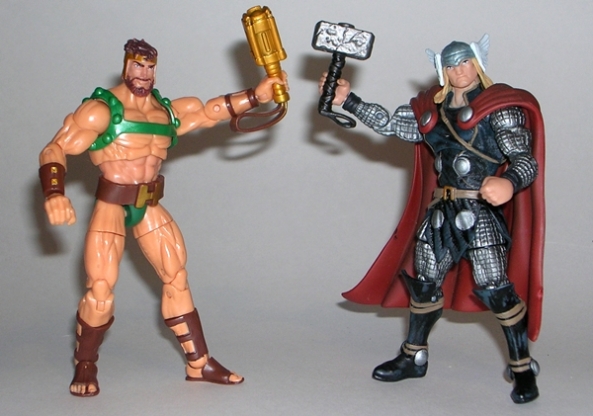 I’ll confess, as much as I love Hercules’ character in Marvel’s funnybooks, his figure wasn’t high on my list. I guess I just didn’t think Hasbro could produce a stand-out figure of such a simple character design. In this case, it’s nice to be wrong. As soon as I had him in hand, I was thrilled with the way he turned out. And with Hercules, I am now completely caught up with features on my current Marvel Universe collection. I’ve been saving a Marvel Legends figure for next week’s Marvel Monday and I should have some new MU figures to look at in a couple of weeks.