And we’re back for the second half of a Kre-O Optimus Prime feature that is rapidly wearing on my patience. I say “second half” but this is going to go a lot quicker than yesterday. Having built Prime into his truck and trailer mode and shooting some pictures, last night I poured myself a generous glass of Jameson and set about to pulling him apart. I took the time to separate the parts by color, poured another glass, and dove in to rebuilding him as robot and battlestation. Having the parts separated was a huge help and overall this build went smoother and faster, but there were a lot more parts left over, so that might explain why. With a little perseverance, and two more glasses of Jamie, I was able to wrap up the build before turning in for the night. It would have been helpful to use the box as a tray for the parts, but after two days the cat has still not relinquished it. 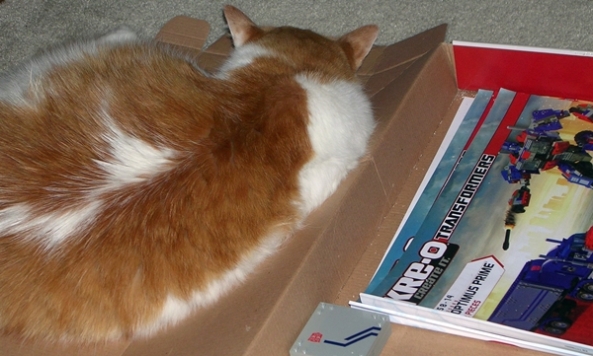 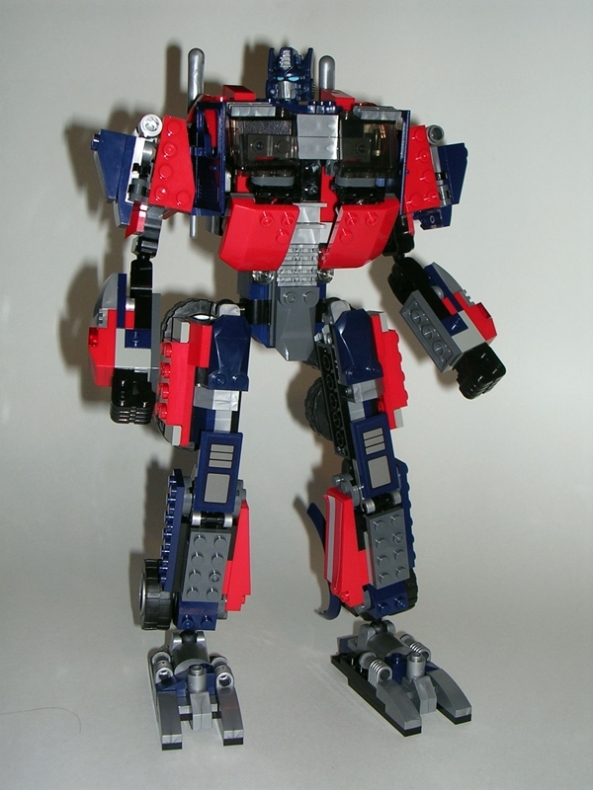 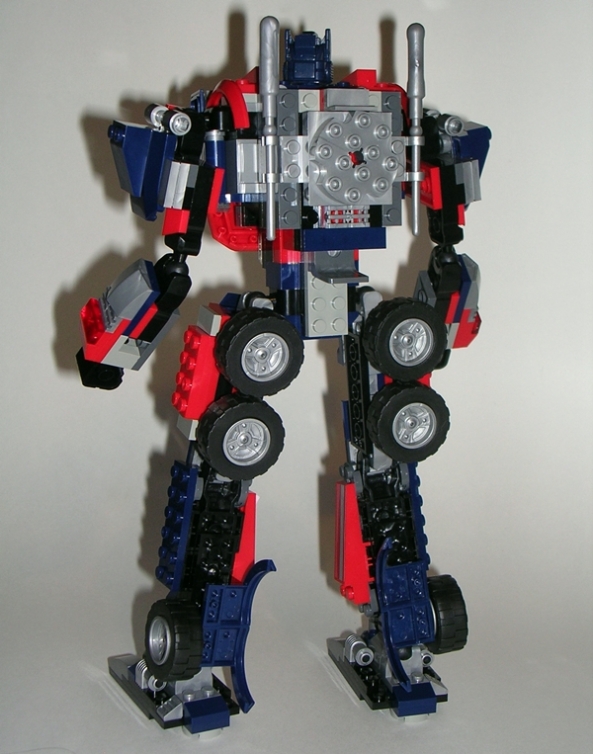 I like it a lot! I do wish I still had my Kre-O Bumblebee built so that I could compare the two in size, but after two days of wrestling with Kre-O, I would rather scrape my tongue with a cheese grater than build another one. So, sorry, but no comparison pictures. Prime strikes me as being about the same size, but a little less beefy and less complex. There are some really cool design features to him, like the way his chest is constructed, his smokestack backpack is neat, and oddly enough I really dig the construction of his feet. He’s very well proportioned and the head sculpt is particularly nice and a lot more evocative of G1 Prime than the Bayformer version. Only six of his wheels actually transfer to his robot mode, this may bother some people, but I’m ok with it. Still, he does look a tad skimpy in the arms and legs. Not bad, mind you, just like he could have used a little extra oomf.

Prime features ball joints in the neck, shoulders, elbows, hips, knees, and ankles, and his fists rotate. He has pretty good poseability and he holds together fairly well while I’m fiddling about with him. I know some people complain Kre-O doesn’t hold together, but that hasn’t been my experience. 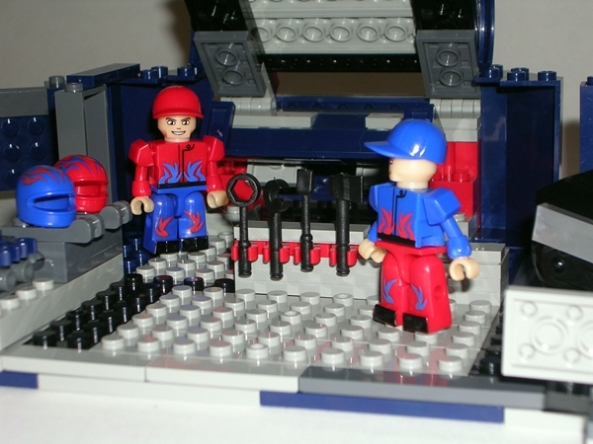 The other part of this build is the “battlestation” which is really more of a little base for the human Kreons to hang out and do maintenance on their motorcycles. There aren’t any guns or anything else to suggest it is a station for battle. Keep in mind, I tried to use as many parts as I could to build this, so mine’s a bit of an enhanced custom job over the suggested model. It’s not bad for what it is. You get a control center, a maintenance area with a rack for the tools. I added a place for them to keep their helmets, and both bikes can fit in the base. You also get a pair of barricades. The whole ensemble sort of looks like something that Prime’s trailer can transform into. I’m vaguely reminded of other trailer base modes. I’m fairly certain, the base is built only from parts using the trailer, but since I already pulled everything apart, I won’t swear on that.

And that’s Kre-O Optimus Prime. He’s a cool set, but he definitely taxed my enthusiasm for building these things. All the modes are fairly well designed, and everything fit together pretty well, but building it still made me appreciate Lego all the more. Even the most complex Lego sets are still fun to build, because they’re carefully thought out with that purpose in mind. This Kre-O set felt like it was working against me and at times it plunged below my tolerances. It was originally around $60, which isn’t too bad considering all the parts and the play potential, but I picked up mine a while back on clearance for about $25, which is certainly a more appetizing price. Now, he’ll stand on a shelf for a couple of days before I can get the nerve up to break him down again and file him away with my other Kre-O, Lego, and Megabloks sets. I do know, that unless I can find some of the GI JOE sets, I’m going to be done with Kre-O for a while.

One comment on “Transformers Kre-O: Optimus Prime by Hasbro, Part 2”