It’s been a long week, I’m coming down with something, and I just want to flop onto the sofa and do very little of anything. It’s no coincidence that today I’m going to look at a figure based on a character I don’t care a hell of a lot about: Red Hood! Yeah, for the most part, I’ve been lucky with my Club Infinite Earth subscription. My interest in the DC Universe runs pretty broad and deep, but sooner or later I was bound to get a figure that I could have done without. And so, this guy arrived on my stoop this week in complete disregard for my apathy toward most Batman comics. Let’s get this over with, so that I can pop in a DVD and go back to being horizontal again. 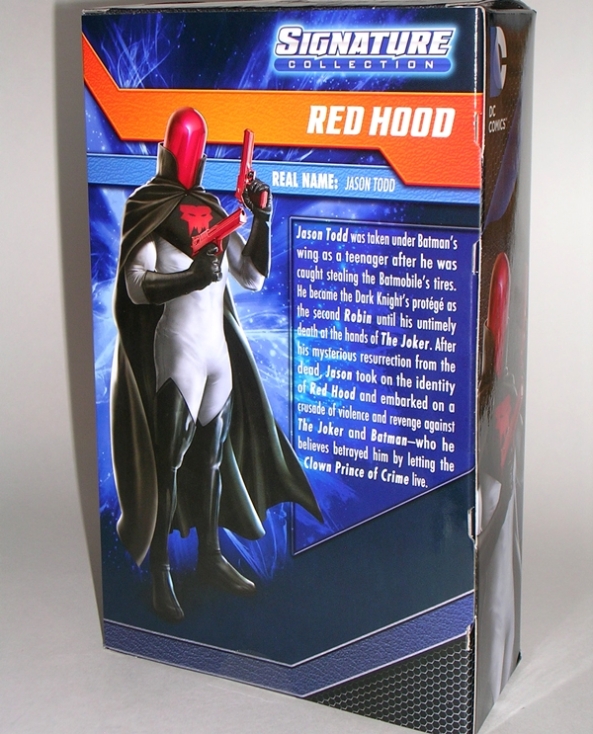 There’s the packaging we’ve all come to either love or tolerate from DC’s Signature Collection. I still dig it. You get a nice window box that shows off the figure quite well and is totally collector friendly. The character art is usually excellent on the DCSC packaging, but in this case, it seems off. There’s just something about the character likeness that doesn’t work for me. Maybe it’s the head sculpt? I kid, I kid… Red Hood’s head is a giant Tylenol gel capsule. It’d be hard to screw up the likeness on the box art. It’s fine.

And here he is in all his glory. Red Hood is a f’cking terrible character design. It’s possible that he’s more credible in the comics, but as an action figure, he looks like he could have been one of the MOTU designs that lost to Fearless Photog back in the 80’s. But he is what he is, so I’m going to try to not beat up on the figure too badly. Oh, who am I kidding? Yes I am.

Red Hood uses a standard DCUC style buck molded in pale grey plastic. His gloves are sculpted, but his boots are just painted on, as is the chest emblem. None of the paint lines are particularly sharp and there’s some mold flashing on the arms. The cape is plugged into a hole in the back of the buck and the head is just a big pill painted red. At the very least, Mattel could have used a clear dome for the head and painted the inside red to give it a little illusion of depth. What’s here looks like the quickest, cheapest, and dirtiest of cash grabs. On the bright side, at least you get two pistols. Too bad they’re so thin that they’re almost two-dimensional. Functional holsters might have helped nudge the figure up a notch in my eyes, but no. On the contrary, only one of his hands is sculpted with a trigger finger to hold the gun properly. 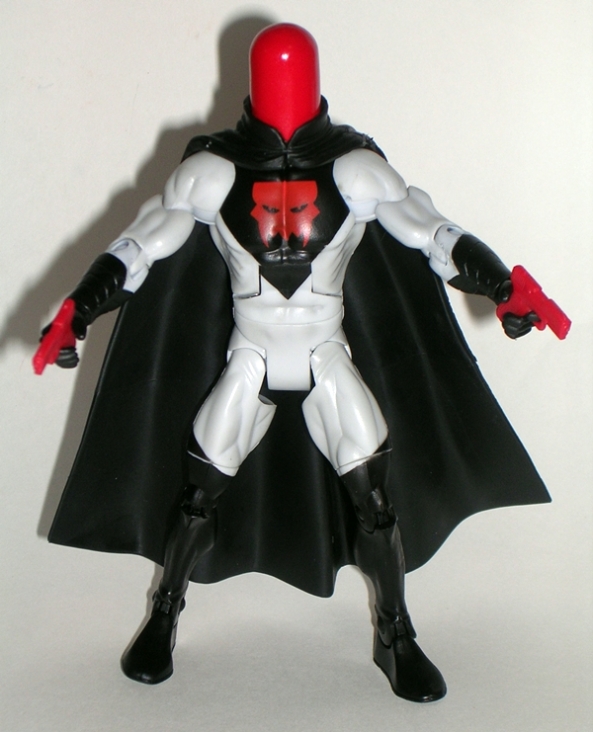 Articulation is the standard DCUC affair. The arms feature ball joints in the shoulders, swivels in the biceps and wrists, and hinged elbows. The legs have the usual DCUC style joint in the hips, hinges in the knees and ankles, and swivels in the thighs. The torso has a waist swivel and an ab crunch hinge. And yes… the dome will turn from side to side… brilliant!

And that’s it… I’m spent. If you’re a big Jason Todd fan, then this figure might scratch your itch, but it’s the first one in the CIE sub that I would have preferred to have opted out of. In fact, he may still find his way onto Ebay. Despite acquiring a renewed love for the character, I hate this appearance. It just feels like  lazy character design, and the figure feels like a slop job. In the congested shelves of my DCUC display case, I’m not sure I even want to spare him any standing room. $28 for this guy?  Blah!

And that’ll do it for DC Week. I’ll try to mix things up a bit more next week, but I have a feeling the pendulum is going to swing the other way and we’re going to be in store for a fair amount of plastic Marvel tat. See ya’ll on Monday!