This week I finally added Hot Toys’ Red Skull to my collection. It was an inevitable purchase since Cap’s movie was my favorite among all the stand-alone Avengers films, and “The First Avenger” Cap was my very first Hot Toys purchase. Buying Red Skull was a no brainer. Nonetheless, he kept getting pushed back again and again in favor of other stuff. Luckily, he’s hung around at Sideshow long enough for me to finally buy him. For all intents and purposes, Red Skull is two figures in one, so I’m going to look at him in two parts. Today we’ll cover the packaging and the Hugo Weaving likeness and tomorrow we’ll check out the real deal in his black jacket and all his skullified glory! 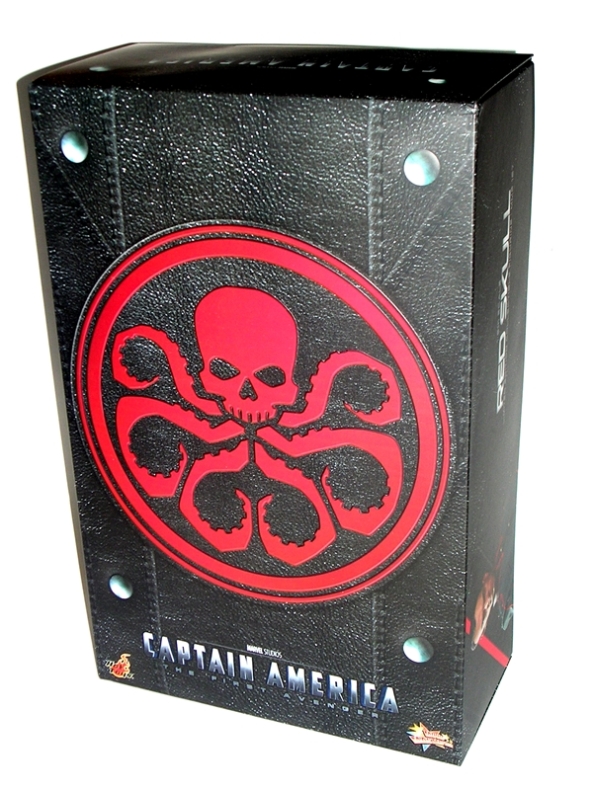 In a way, I’m surprised this figure exists. Weaving has gone on record that he wasn’t enamored with the role and wouldn’t be interested in doing it again. Fair enough. Honestly, the film did a fantastic job developing Cap as a character, but didn’t do nearly as much to build up Red Skull as a formidable and multi-layered villain. Nonetheless, Weaving did a great job with what the script offered him, and I’m mighty glad he consented to lend his likeness to the figure.

The packing is the same style used for The First Avenger Cap figure, which is great, because anything else would aggravate my OCD. The box has a faux leather deco with a giant and sinister looking Hydra emblem emblazoned on the front. It also has the name of the film on the bottom. I don’t think Red Skull would appreciate the fact that his figure’s box has Cap’s name on it and not his. Thankfully, the back of the box features a shot of the figure with his Skull head and leather overcoat, along with a list of the people who contributed to the making of the figure.

Open the lid on the box and you reveal a cardboard insert covering the tray with yet another shot of the figure. This time it’s him in his uniform and sans coat. The cool thing about this packaging is you get a nice sampling of all the different display options the figure offers as you go through the process of opening it. On the inside of the lid, there’s an enclosed tray with the figure’s overcoat. 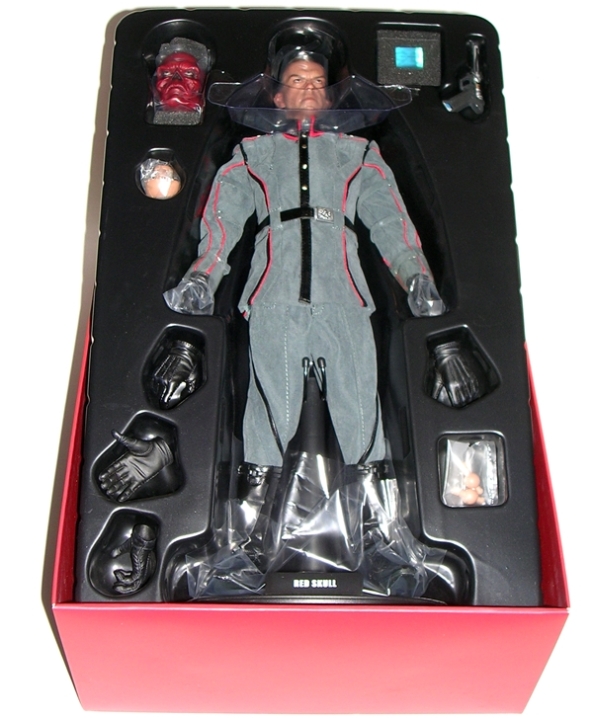 Lift the insert and you finally reveal the figure and get the first look of him as Johann Schmidt, with the Hugo Weaving head attached. The figure is flanked by the usual array of extra hands and accessories that one associates with Hot Toys releases. 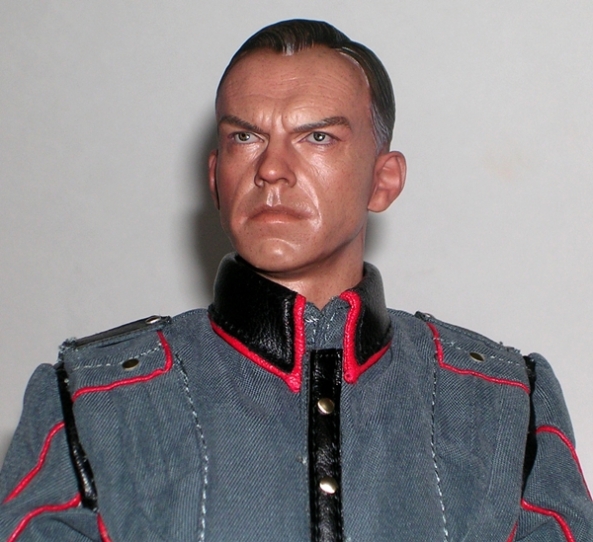 Here’s a surprise, the likeness is pretty fantastic. Hey, it’s Hot Toys, what do you expect? I have to imagine that Mr. Weaving has been reproduced plenty of times in action figure form, but it’s hard to imagine anyone nailed it quite as well as this one. He certainly has a very distinctive face, and I’d wager that that helps with the sculpting process. The skin tone is eerie and the eyes have that faint spark of life to them that only Hot Toys knows how to do. Schmidt offers a stern, but otherwise neutral expression. Besides the likeness being spot-on, they also included the incidental little scars by his ears that betray his mask. Very cool! It’s almost a shame that he comes with two heads, because I’m really going to be torn on which one to display the figure with, but more on that later. 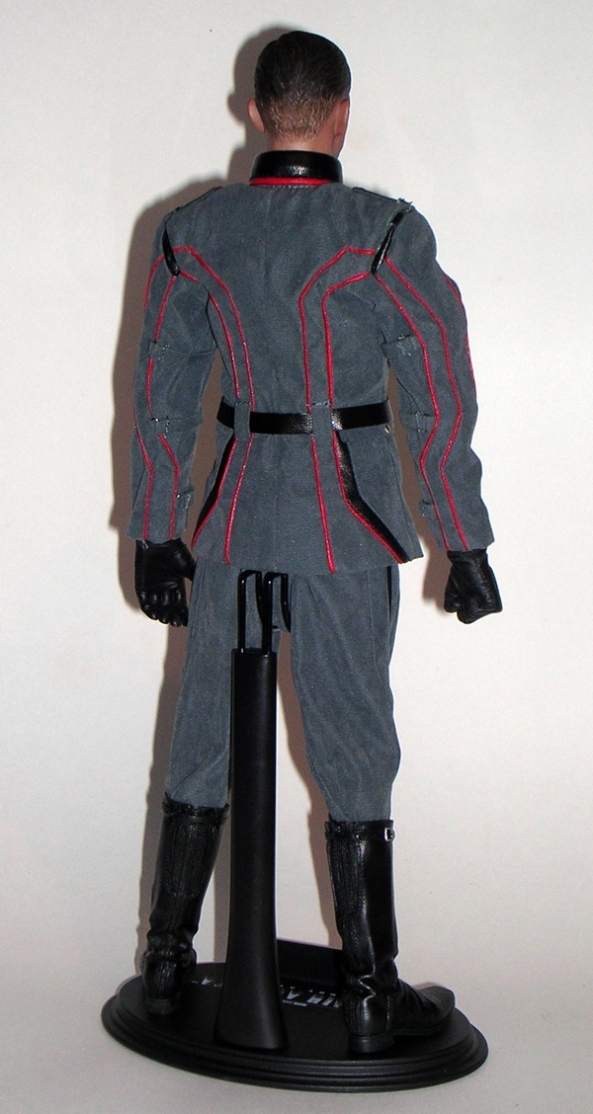 I really like the styling on Schmidt’s uniform. It’s very retro-future-nazi looking, if that’s a real thing and the material feels like it’s a nice quality. There are a lot of fashionable little touches to add to the complexity, like the straps on the arms, the pockets, and the epaulettes. The red piping is beautifully done and adds that extra little snap to what is otherwise just a solid grey outfit. I do think it could have used an extra Hydra insignia somewhere, but that’s really the fault of the film designers and not the figure. As it is, the only Hydra emblem is the one embossed on his belt buckle. The high collar is executed quite nicely. It’s glued down so to maintain its shape and it hugs the neck very well. I was afraid it would require a lot of futzing, but happily that’s not the case. The uniform looks solid right out of the box.

The figure comes with a total of six hands, all gloved. He’s boxed with two fists attached. There are three additional choices for the right hand. You get one open hand, one designed to clutch the cosmic cube, and one designed to hold his gun. There is only one alternative for the left hand, and it is a regular open hand. A cube clutching left hand would have been nice, as my preferred pose would be pistol in one hand cube in the other. You can still make it work with his open left hand, but not as well. I think this was a bit of an obvious oversight by the design team. You also get an extra set of posts for the hands in case you snap one off. 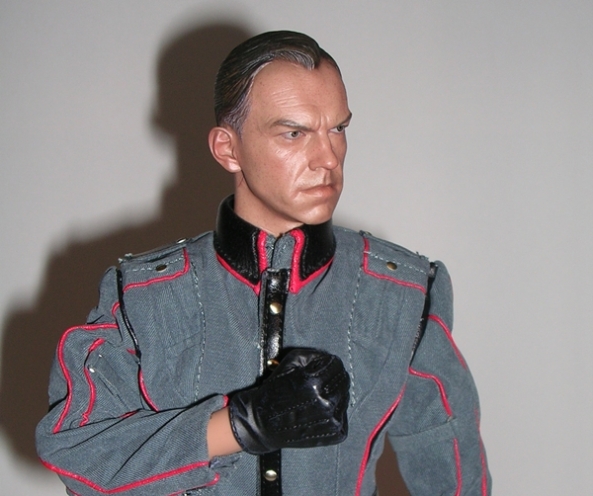 The articulation seems pretty standard for Hot Toys. I’m hardly an authority on the line, as this is only my fourth figure, but he can do most poses that I would want. The uniform offers a little bit of restriction in the shoulders, but it’s not nearly as restrictive as the shoulders of Captain America’s uniform.

And, I’m going to break there. I’ll go away and do some tinkering with the figure and when I come back tomorrow we’ll check out Johann transformed into Red Skull as well as the accessories.