Alrighty, time to wrap up the look at the new 3 ¾” Doctor Who figures with the Cybermen! The Series 7 episode, “Nightmare in Silver” gave these guys their first real upgrade since their return to the show in 2006. It’s a much sleeker and more agile look than the Cybermen have had in a while. In fact, they now look like Tony Stark may have had a hand in their redesign. Let’s see how they turned out in the new 3 ¾” format.

There’s the packaging and it’s the same as we saw yesterday with the Ice Warriors. There’s a personalized insert in the bubble and the Cybermen come with the generic “DWARTIS” figure stand. Once again, I am unable to resist troop building these guys.

The sculpting on these guys is definitely well done, albeit it does strike me as a bit soft in some areas, particularly the head. Although, it may be because the new heads are more rounded and I’m still not used to seeing that. I’m not a big fan of the disc in the center of the chest. The discs were only ever on the last design and when it’s carried over to this new body, it really does look way too derivative of some of the Arc Reactor in the Iron Man armors. Of course, that’s a gripe with the creature design and not the figure. The figure is excellent, with all the various plates and panel lines of the new design wonderfully recreated. I love the sculpted spine in the back and the figure even achieves a look of convincing layering between the armor plates and the softer joint segments.

Obviously, there isn’t a lot of dynamic coloring on this figure. The cybermen are black and silver and that’s it. The figure is cast in grey plastic and painted entirely in a metallic silver, which overall looks pretty nice, although some figures have inconsistencies in the paint. The deco makes them look a bit weathered, which I’m pretty happy with, but if you’re looking for your Cybie to be super shiny and fresh, it may disappoint a bit. Coincidently, this is the kind of paint I would have liked to see on the Ultron figure that I looked at on Monday. So in that instance, Character Options 1, Hasbro nil.

The Cybermen have the same basic style of articulation as the Ice Warriors. The head is ball jointed. It can turn fine, but the rest of the head movement is a little shallow. The arms feature ball joints in the shoulders and hinges in the knees. Again, the lateral shoulder movement is a little restrictive because of the shoulder plates. The legs feature ball joints in the hips and hinged knees. You can get some Ok poses out of these guys, but I would have really liked a swivel in the waist or a ball joint in the torso. Still, considering how crappy the articulation has become with other lines in this scale, I’m not going to harp on it too badly. This is actually better articulation than most of Hasbro or Mattel’s current film-related efforts in 3 3/4 inches. 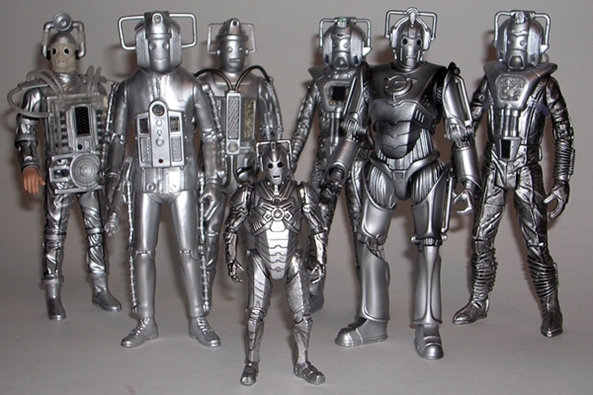 And there you go, we get the new Cybies exclusively in the 3 ¾” format. I absolutely love these figures, but only getting these in the new scale format… I gotta be honest, folks, it really stings! I’ve got every incarnation of the Cybermen in my five-inch collection (well, except for the “Revenge” versions, which have yet to come Stateside), so not being able to add the latest versions to that display really sucks. This is the first time the scale change has really pissed me off, but I’m sure it will not be the last. But hey, at least the figure is really good. 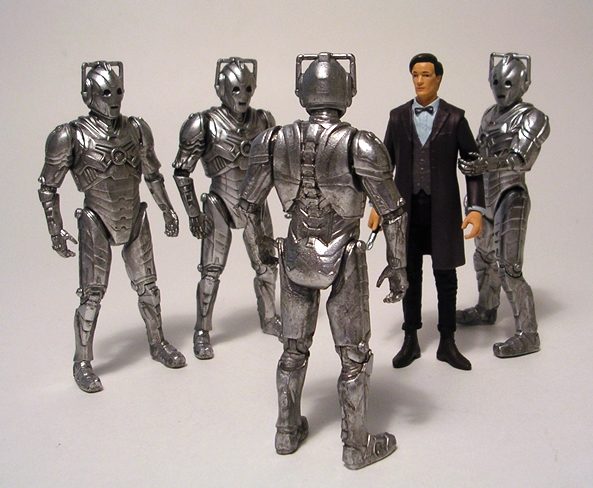 And that wraps up this initial wave of Doctor Who figures. Fan response to this new line has not been very favorable, although my dealer has now sold out on all but The Doctor on two or three occasions. It’ll be interesting to see what the future holds for the line, and whether we’ll be getting a new wave from the 50th Anniversary special and the Christmas special. I suppose it’s possible we could get a 10th Doctor in the scale, since Tennant is reprising his for the 50th. The Zygons are also appearing and I could easily see myself buying three or four of those. I will say that the biggest opportunity for going small scale was more playsets and vehicles, and I’m not real keen on those cardboard environments. If we don’t at the very least get a TARDIS console room, I’m going to be pissed.