There aren’t many Doctor Who figures in my collection that haven’t been featured here on FFZ, but somehow this beauty of a set was missed. I’m dusting my shelves today, so I decided to pull it down and have a looksee. It was way back in 2006 that the Cybermen made their first appearance on NuWho with a two-part story called “Rise of the Cybermen” and “Age of Steel.” As much as I love the Daleks, I think I was more excited to see the Cybermen return and I really dig this story, particularly the way they were reintroduced in a parallel Earth. It was precisely the sort of creative story-telling that has been absent from a lot of the Dalek and Cybermen stories of old, which often resorted to, “Oh, hey look, it’s time to bring this enemy back… write me a story for it.” Nope, these were the Cybermen… but they weren’t… it was just the kind of mind-bending shit that I love in my Doctor Who. Lumic was a really great villain too. He was an interesting mix of a sympathetic character and bat-shit crazy megalomaniac. Of course, he got his comeuppance when he was upgraded to the Cyber Controller, who happens to be the centerpiece of this set. 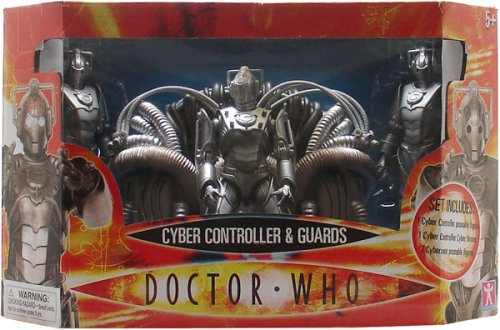 I’ve had this thing for a long time and the packaging is long gone, but I cribbed a picture off of The Ebays for reference. I can still remember being so excited when I got this thing. Back then I was still in shock that we were getting proper Doctor Who figures, and when CO started releasing larger sets like this, my mind practically exploded. The set came in a window box with deco inspired by the credit sequence that would stay with the show all the way to the end of Tennant’s reign as the 10th Doctor. It’s a great presentation and part of me wishes that I had saved the box because it’s perfectly collector friendly. Inside you get The Cyber Controller and his throne plus two Cybermen Guards. Let’s start out with the Guards. 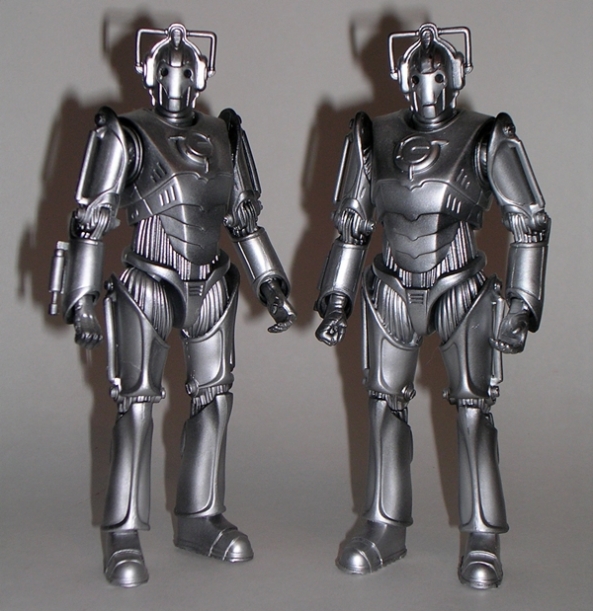 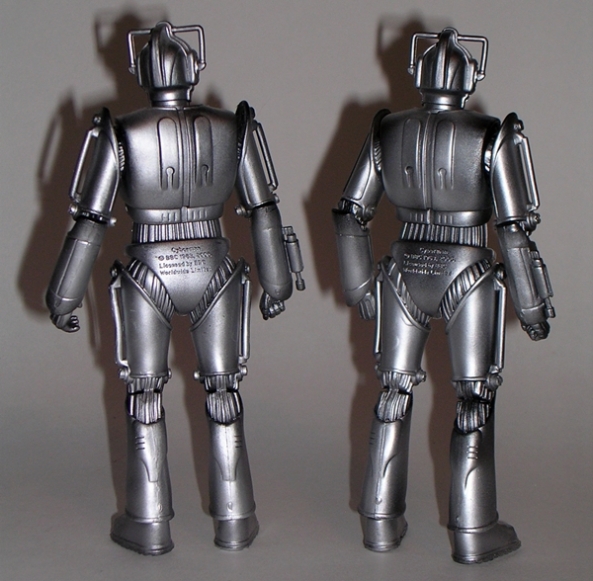 The Guards are just typical Cybermen, which is great for troop builders as they are identical to each other and any other standard Cybies released in the series. I liked the redesign of the NuWho Cybermen a lot and I’ll go one step further and say that I think these figures look even better than the onscreen counterparts because they don’t have the fabric bodysuit showing between the joints. Instead it’s sculpted to look more like wires or just flexible metal. These guys also have the wrist gun sculpted onto their right forearms and the Cybus emblem on their chests. The silvery finish gives them a nice metallic look without being too shiny. I probably have four or five of these guys total and I always regret not picking up some more. 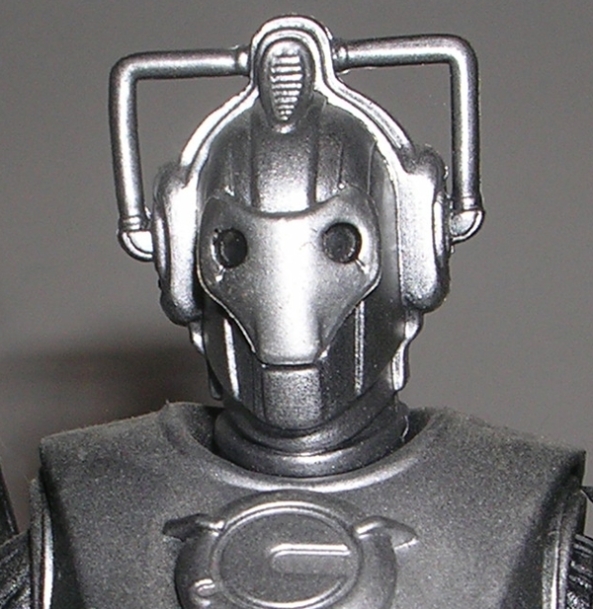 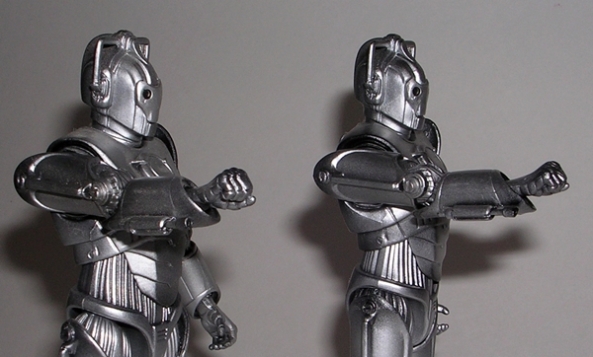 The articulation on this pair is pretty good, especially considering the Cybermen of the period were not terribly agile. You get a rotating head, which appears to have a tiny bit of up and down movement. The arms rotate at the shoulders, have hinged elbows, and swivels in the wrists. The legs are balljointed at the hips, have hinged knees, and ball joints in the ankles. I do wish you could swivel their arms to make their firing position a little more convincing. For some reason I want the gun arm on the top, but hey it still works. 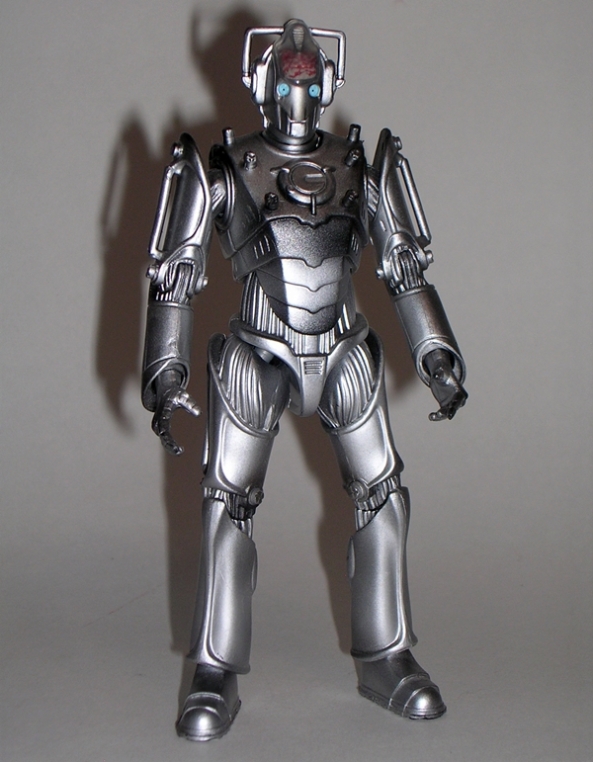 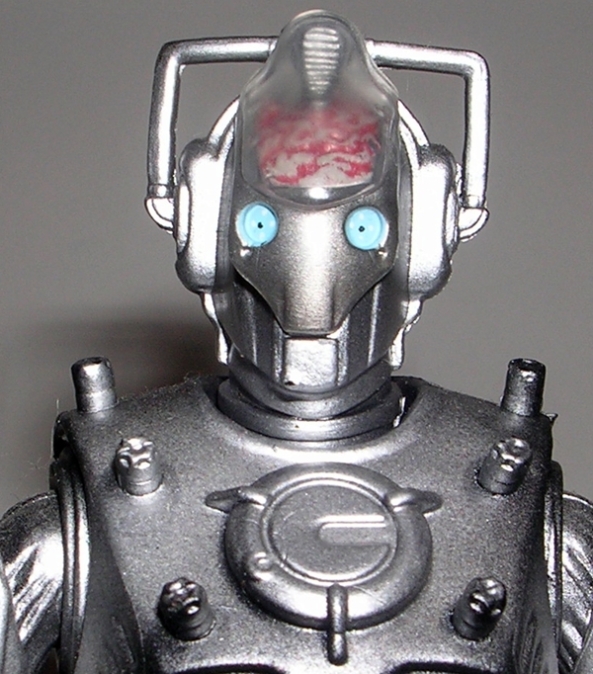 The Cyber Controller was unique to this set and I’m pretty sure he hasn’t been re-released since. I originally presumed he would be sculpted into the throne, but nope, he’s a bona fide figure. He’s basically a slight resculpt of the regular Cybermen we just looked with a brand new head. The only difference about his body is the lack of a gun on his arm and the six connection ports on his upper chest and shoulders. These are used to wire him into the throne. The head features a transparent dome with his brain exposed and the eyes are painted blue instead of black. 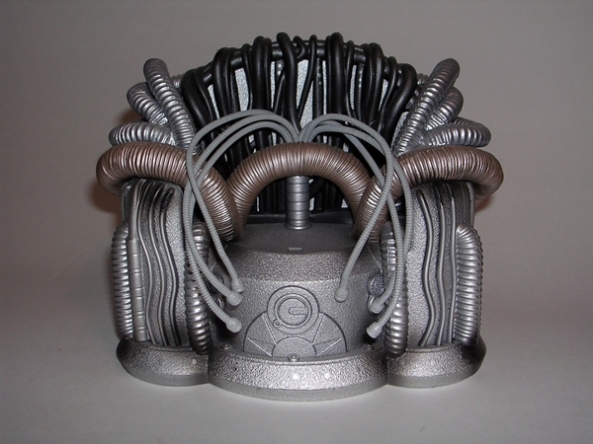 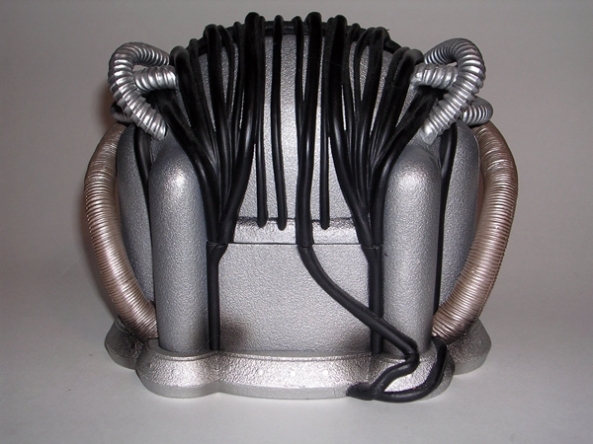 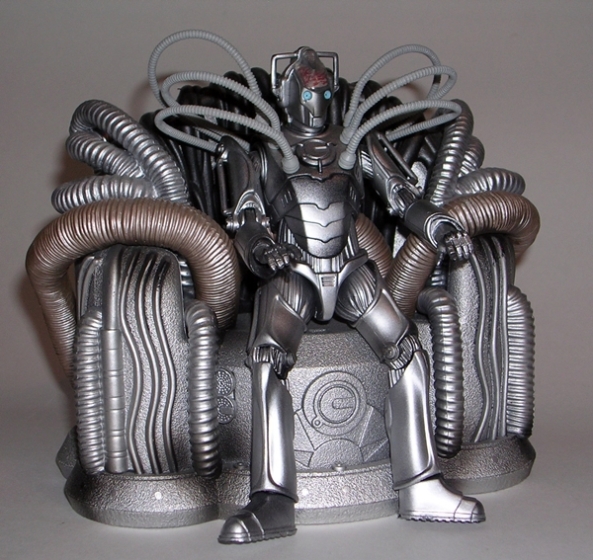 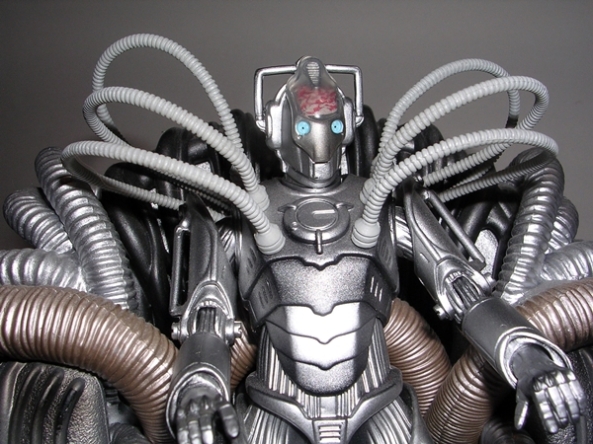 The throne is one big piece of plastic with a ton of wires and cables sculpted into it and it has a little bit of an HR Giger feel to me. The chair itself has a rough texture and there’s a Cybus emblem near the base. The Controller doesn’t so much sit in it as lean back into it and bend his legs, but he will stay put pretty well and he looks great. Every now and again he’ll slip down so a tiny blob of blue tack on his butt helps him stay planted. The wires flexible wires all plug into his access ports to help integrate him into the chair. 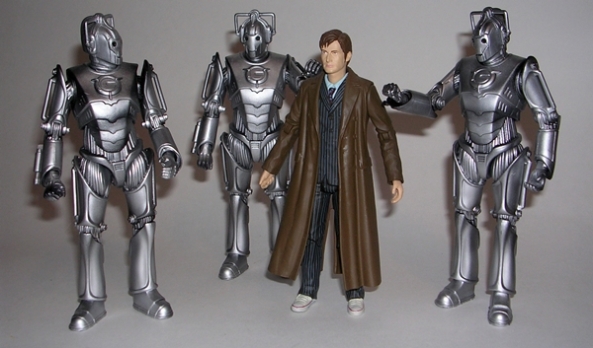 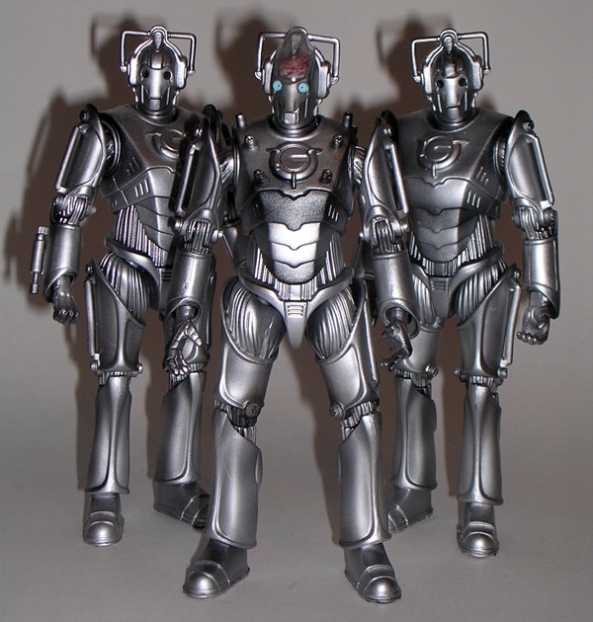 If you love your Cybermen as much as I do, you really need this set in your Who collection. I think it’s one of the coolest Deluxe sets Character Options pumped out during the time. I seem to recall paying about fifty bucks for it, which even now doesn’t seem too bad considering the Cybermen were often selling for around $20 each when they were available. Right now this set is just chilling on my NuWho shelf, but one of these days, when I get more display space, it’s going to be the centerpiece of my evolution of the Cybermen display.