Alrighty folks, yesterday we checked out Harrier’s jet mode and today we’re having a look at his robot mode. First off, this guy transforms almost exactly like his brother Phantom. The wings on his legs fold up a little differently, but that’s really the only difference. It’s a fairly simple and intuitive process although just like Phantom, clipping and unclipping the tail section still makes me a little nervous every time because it’s a tight fit and the thin arm that it’s attached to. I’ve changed Phantom back and forth dozens of times and haven’t even seen any stress marks appear so at this point I don’t think it’s anything to worry about.

In robot mode, Harrier looks mighty damn good and shares a lot more similarities with Phantom than he does in his aircraft mode. But even here, the similarities are only superficial. If you look closely even the parts that appear to be identical have subtle little changes to the sculpt or paint to make him unique. Obviously, pieces like the shoulders are different because Harrier’s shoulders make up the intakes on his alt mode, but TFC made all sorts of changes to the parts that don’t even show up in his Harrier form. The chest is completely new and features that great boxy look that screams G1 Transformer. Check out the upper legs, pelvis, and forearms. These could all have been reused directly from Phantom, but TFC still took the time to make little changes to the sculpt to set them apart. Sure, we should expect that in a $100 toy, but it’s still not something that I’m going to take for granted.

Obviously, Harrier gets a brand new head, and honestly I’m not terribly keen on it. It’s the two silver pieces on his cheeks that I’m not in love with. The rest of it is Ok. He has yellow light piping in the eyes and a regular mouth instead of a plate. None of these figures heads have been close homages to the G1 characters, but Slingshot had a pretty distinctive looking head and this one is quite far from the original. Anyway, it’s not terrible and it’ll probably grow on me.

Harrier wears the nose and tail of his aircraft mode on his back just like Phantom does. The two sides peg in together and stays together quite well. Sure it’s a lot of aircraft kibble, but it’s wonderfully faithful to the old G1 animated designs where they basically had deformed jets on their backs. I love it!

Also like Phantom, Harrier’s fuel pods can be used as weapons. You can put them into his hands or you can plug them into his arms, which is the way I prefer them. These pieces are sculpted in red plastic and the tips are painted with a little metallic silver. 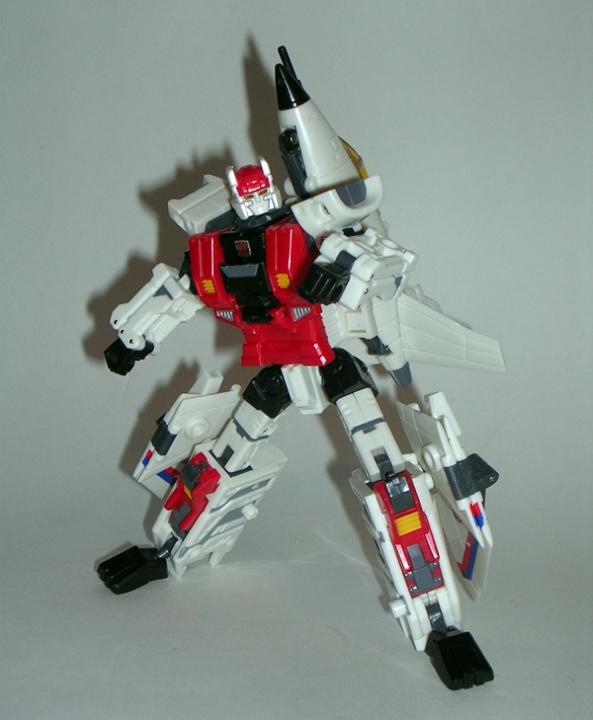 Of course, Harrier also transforms into one of Uranos’ arms, but I’m still not combining these guys until I get the last one. The first three Uranos figures were one hundred percent originals, so Harrier was the first of the last two, which are reworked versions of the first two. I wasn’t sure how different he’d be, but I’m totally pleased with the outcome. TFC went out of their way to set him apart with a lot of tiny little superficial changes that they could have just as easily not bothered with. I’ve been totally satisfied with these guys each step of the way and Harrier is no exception.  So that’s four down with only Falcon left. I’m still hoping he’s going to show up in August so I can finally put this long journey to bed.