There weren’t a lot of Exclusives that I wanted from this year’s San Diego Comic Con, and I suppose that’s a good thing because I got shut out of most of them anyway. Sure, there’s always Ebay for the ones that I missed but the premium prices are probably a good indicator that I didn’t really want a lot of them that badly after all. Fortunately, Hasbro’s Thunderbolts set, which was high on my list, lasted for about two hours on Hasbro Toy Shop the day the exclusives went up for sale and I was able to snag one. The set doesn’t exactly include the A-listers of the Thunderbolts’ roster, instead it’s post-Siege, but it does have some very cool figures of characters we may never have gotten otherwise. Today we’re going to look at the packaging and Luke Cage, tomorrow we’ll check out Ghost and Judith Chambers, and on Wednesday we’ll look at Moonstone and Crossbones. Let’s do it…

Packaging and presentation is usually a big deal for Con Exclusives and this set is certainly no different. With five Legends scale figures packed into one set, a big box was inevitable, but it wasn’t until this set was in hand that I truly appreciated how big this box was going to be. The figures are arranged in a vertical tray and presented in a box that is designed to look like Thunderbolts Tower. It’s a cool, if not obvious, design and includes the SDCC emblem on the bottom corner.

The back of the box has a big panel of artwork featuring all the characters along with “Marvel’s Thunderbolts” and “Justice, like lightning…”

The front flap is rounded and opens up to reveal a window showing the figures and another panel of character art. The rounded front of the box will likely be an issue for mint-in-box collectors as it seems pretty susceptible to being crunched. My set was fairly well packed and it still showed up in pretty rough condition for a collectible. It’s not just the front, but in general the edges of this massive box haven’t weathered well at all. The interior tray is also quite flimsy and requires careful removal of the figures if you’re planning on keeping it all together. I usually do save the packaging on my SDCC Exclusives, but in this case, I’ll likely deep six this beast of a box. The size alone will make it difficult to store, but when you toss in how fragile it is, I’m willing to give up on it now and save myself the grief. 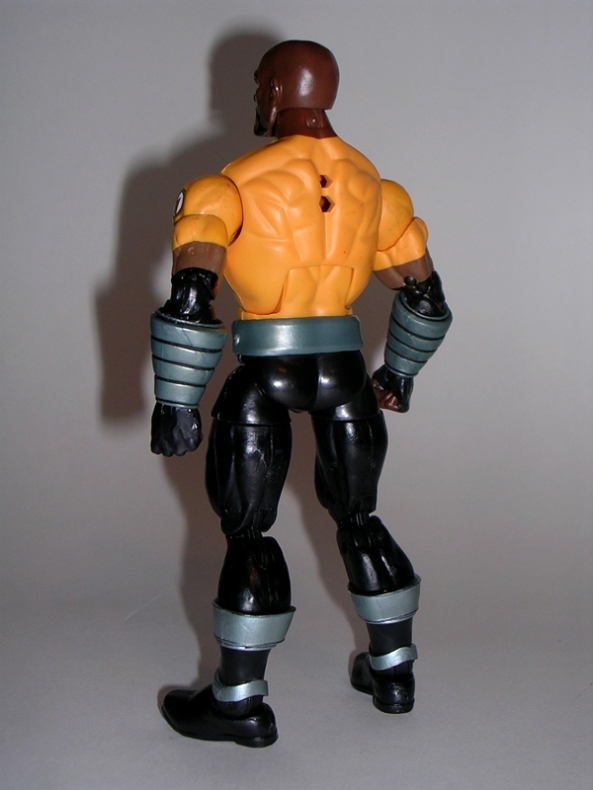 Kicking things off with Luke Cage, he is probably the least interesting figure in this set, but a welcome addition to my collection nonetheless. He comes sporting his modern look with his yellow top and Thunderbolts emblems on the shoulders, sculpted wrist bracers and heavy boots. A friend and fellow Legends collector clued me in on the fact that Cage is built off the body used for the recent Hyperion release, a figure that I have yet to pick up. It certainly explains the cape holes in Cage’s back. It seems like Hasbro could have been bros and plugged those unsightly things, but whatever. I think the body works well for Cage and while I know some people take issue with the proportions on this figure, I’m pretty happy with him. 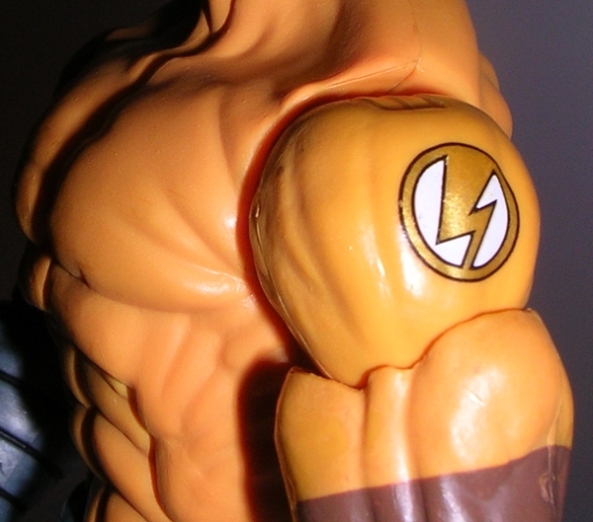 Early photos of the set had him sporting a huge noggin, but thankfully it was fixed for the release. Again, I know some collectors are still grousing about it being too big, but at this point I think we’re splitting hairs. This is a pretty heavily muscled buck and it needed a suitably sized head. The sculpt itself is pretty good, although it’s worth pointing out that he has a dent in the side of his head that appears to be part of the molding process and not unique to my figure. That would probably explain the angry expression. “Sweet Christmas, someone kicked me in the head!” The paint is ok, but not exceptional. There’s a stray bit of black on his jaw and he the paint for the beard doesn’t quite match up to the sculpt. It looks fine so long as you don’t scrutinize it too closely.

The articulation on this figure is standard for the line and yet still so satisfying and fun to play around with. The neck features both a hinge and a ball joint. The arms have ball joints in the shoulders, double hinges in the elbows, and swivels in the biceps and wrists. The legs are ball jointed at the hips, double hinges in the knees, hinges and rockers in the ankles, and swivels in the thighs and boots. He can swivel at the waist and has an ab crunch in the torso. 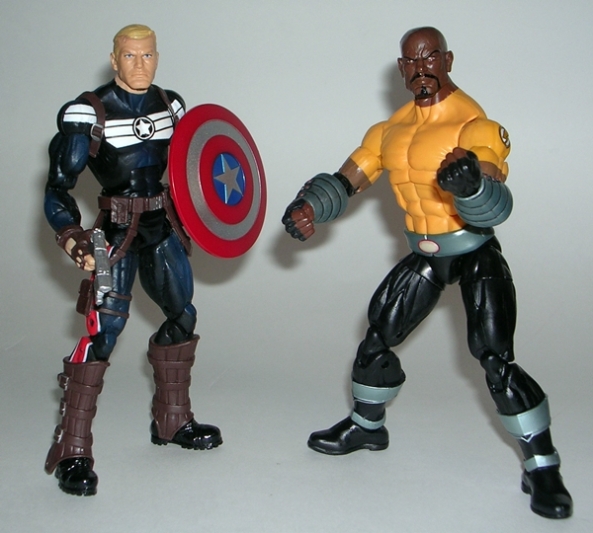 Luke Cage is a solid figure, but for me he’s not the most exciting release around. He also won’t satisfy fans looking for a mainstay version of the character for their shelves. But this is an exclusive set, so he should be a niche figure rather than the definitive Legends Luke Cage. Either way, he is definitely not one of the figures that made me shell out $90 for the set. Tomorrow, we’ll start getting into the good stuff with a look at Ghost and Judith Chambers.