As promised a couple of weeks ago, I’m going to be using Transformers Thursday to embark on a look back at some of the Robots in Disguise (2001) toys, particularly the Autobot Car Brothers. We’re going to kick things off with Side Burn. Roughly equivalent to a Deluxe Class figure, Side Burn has seen a number of repaints over the years. The original US release of Side Burn was blue, but a while back during one of my many Toy Purges, I decided I was only going to keep my favorite deco of these molds, so we’re going to be looking at his second RiD release. No package shot, so let’s just jump right in to his alt mode. 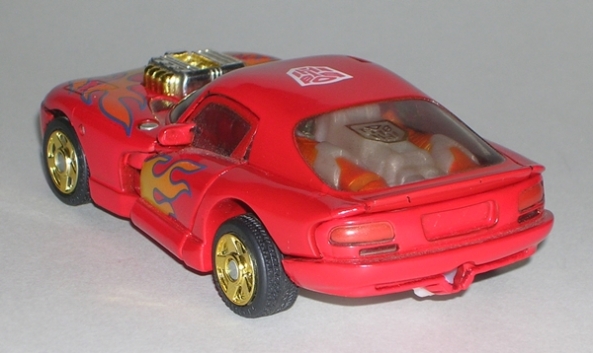 Side Burn is a very snazzy looking Dodge Viper and a good example of why I love the alt modes on these figures so much. It’s funny, but I don’t remember HasTak having the Dodge license for this line, but Side Burn definitely has a tiny little Dodge emblem on the front of his hood. It seems like a lot of expense for just a Deluxe figure. There’s a wonderful sense of realism to this auto mode that we really haven’t seen in a main line of Transformers since, and that’s probably a big part of why I get a little nostalgic for this line. Other selling points for me are the clear windows, the exposed and detailed chromed engine, the gold-vac metal wheels, and the rubber tires with “Cybertron” stamped on them. Hell, the doors even open! Fantastic!

This version of Side Burn sports a deco that is very reminiscent of G1 Hot Rod or Rodimus Prime. He’s red with flames painted on the hood and doors. He has a bold Autobot emblem stamped on his roof and you can see another Autobot emblem through his rear window. Transforming Side Burn is fairly simple, but we get to see how a lot of the Beast Wars engineering revolution carried over into this line. There are tons of ball joints and huge portions of car hanging off of hinged arms. The appropriate word here is shell-former!!! 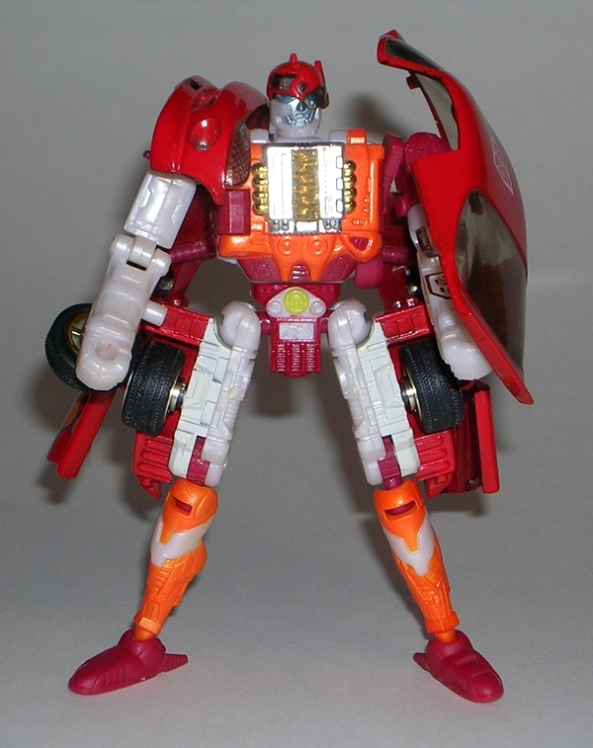 Yup, one of the reasons that the car can look so good is because Side Burn wears a lot of it in his robot mode. The result is you get a very poseable and organic looking robot body with random car bits attached everywhere. Some of them aren’t so bad, while others are rather awkward and annoying. The stuff I like includes the engine block on his chest and the way the two halves of the hood and the doors become downswept wings. The rear wheels on his hips aren’t too bad either. 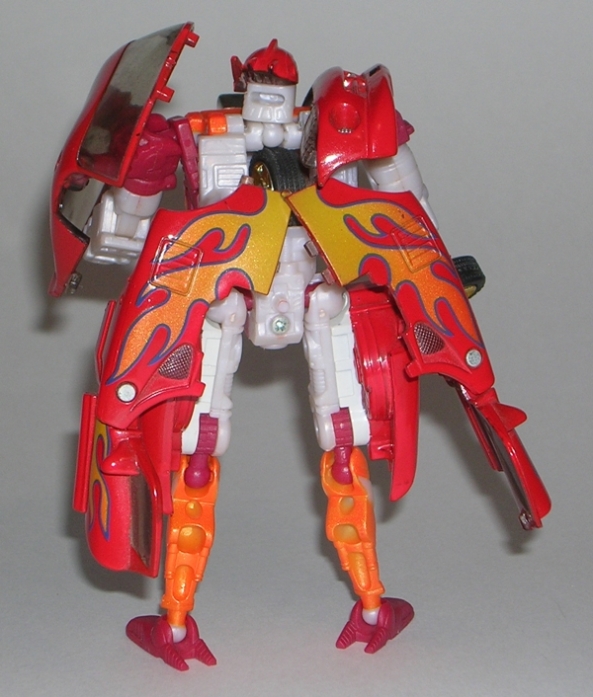 The biggest albatross is the way the top of the car becomes a riot shield for his left arm. In theory, I like this idea a lot and you could see where it would come in handy. But, seeing as it’s permanently attached it seems like having to constantly carry that thing around would get rather annoying. On the other hand, if it were removable, then poor Side Burn would be accused of being a parts-former. It is ball jointed, so at least you can position it in different ways. I’m also not a big fan of the bumper on his right shoulder. This thing just looks awkward and unlike the shield, it serves no real purpose other than to get in the way. 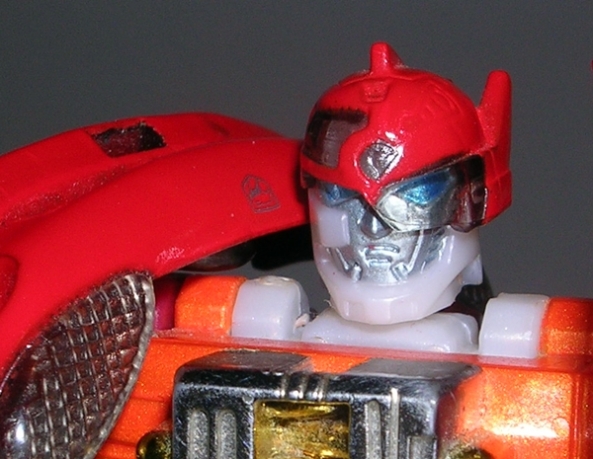 My least favorite thing about Side Burn is the head sculpt. I don’t know what they were going for here, but he looks all messed up. There’s no symmetry and I get the sense that he’s some kind of Cybertronian patchwork monster that crawled its way out of Wheeljack’s secret lab. I suppose it suits the overall ramshackle look of the figure. 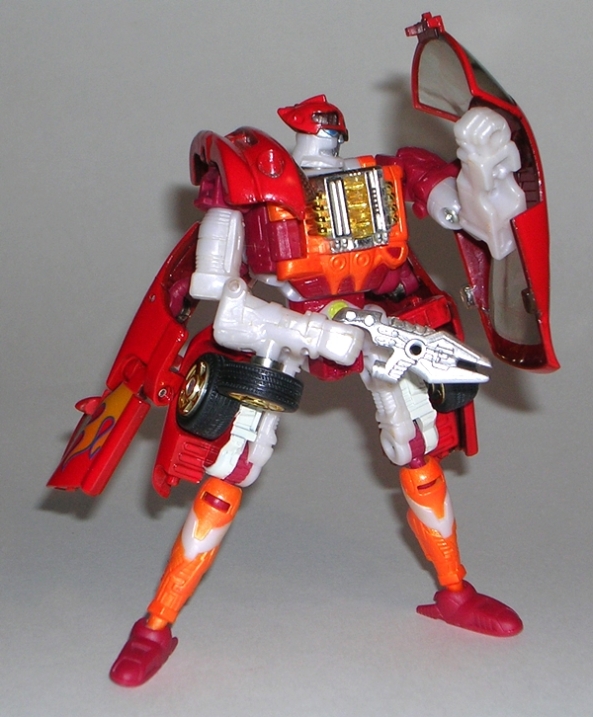 Side Burn comes with two weapons. First, you get a little chromed gun blade. I believe the one that came with this figure was gold, but mine is silver, so the original must have gotten switched with one of my other Side Burns somewhere along the way. His rear bumper also turns into a missile firing crossbow, which I always thought was kind of neat. 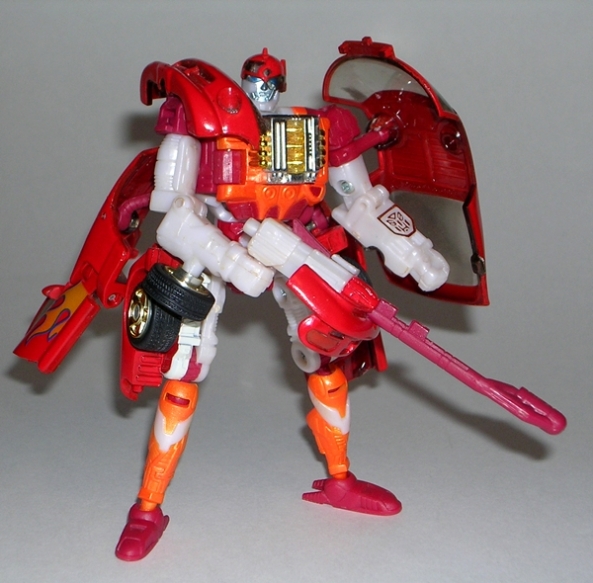 Why I don’t hate this figure is beyond me. Obviously there’s a lot to love in his car mode, but his robot mode is just a twisted mess. And yet, somehow he still has a spot in my Transformer loving heart. Maybe it was because I was so happy to see an actual Autobot in the toy aisle again after so many years? Whatever the case, I can’t hate on Side Burn. He has plenty of problems, but he can still be a fun figure in his own way.

Next week, we’ll check out X-Brawn!