Yes, Club Infinite Earths is dead, but its animated corpse still shuffles on, at least for a few more months. August gave us Brazillian bombshell Fire, a character that many, including myself, were eager to see released in the DCUC style. Naturally, Matty took this opportunity to pull a really clever move (or douchebag move, depending on your point of view) and release only Fire this year and save her partner Ice for the 2014 Sub. Of course, now we know there will be no 2014 Sub so we can only hope that somewhere and somehow Matty will let us buy Ice for a lot more than she’s worth just so we can complete the duo. 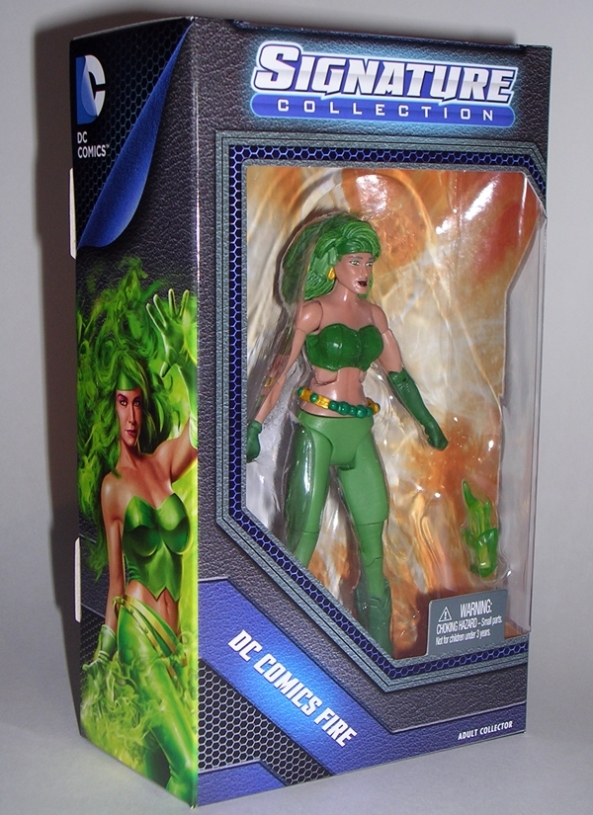 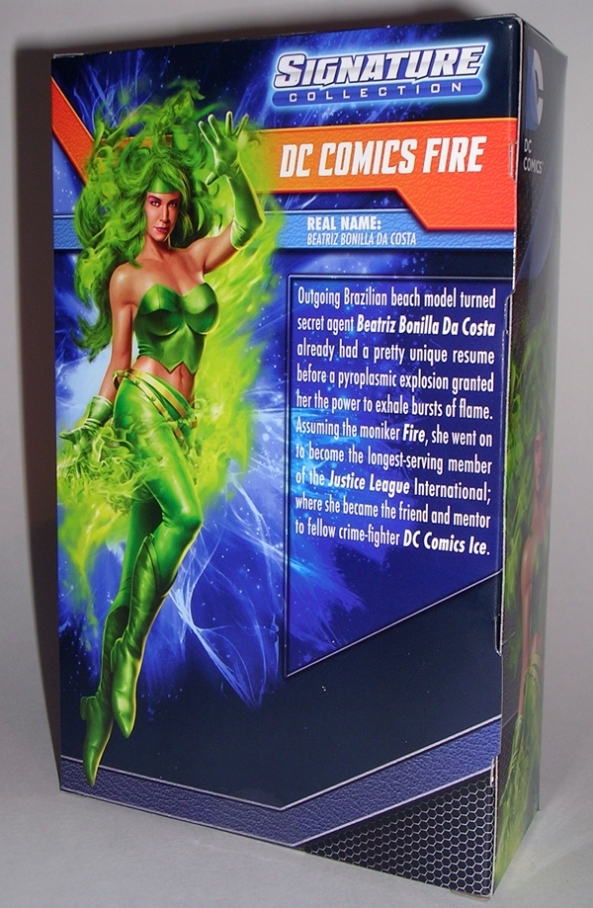 Fire comes in the same compact little window box that we’ve been getting all year from CIE. The character art is quite good and there’s a little bio on the back. The box is totally collector friendly, but in the interest of space, I’ll be clipping off the back panel for keepsies and pitching the rest of it. 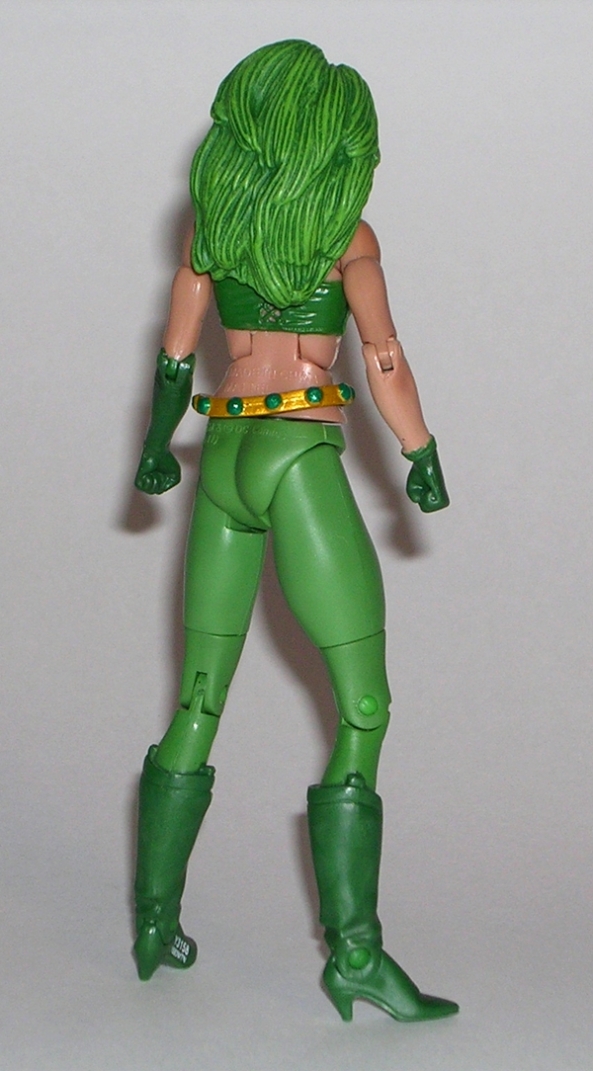 Out of the package and Fire is a pretty nice looking figure. I have some issues, but nothing terribly crippling. Her two-tone green costume consists of a pair of smooth and featureless pants, heeled boots, a pair of appropriately uneven gloves, and a boob wrap… for lack of a better term. She also has a gold and green belt that hangs from one hip. I dig the work Matty did on the costume. I think her top should have extended a little lower, like maybe just to the ab-crunch, but I’m picking nits on what is overall a solid effort.

The head sculpt, I’m not totally keen on. She looks a little less super model and a little more severe. The hair is full on 80’s, which makes her look like she would belong jamming with Jem and the Holograms as much as fighting in The JLI. Again, I’m nitpicking, but in truth the sculpt works ok for me. The paintwork on her face is crisp and sharp and I like the wash they did on her hair.

Running through the articulation, Fire does pretty well for a female DCUC buck. You get ball joints in the neck and shoulders. Her arms have swivels in the biceps and wrists, and hinged elbows. Her legs feature the usual DCUC style hip joints, swivels just above the knees, and hinges in the knees and ankles. She can swivel at the waist and has an ab-crunch hinge. No complaints here. 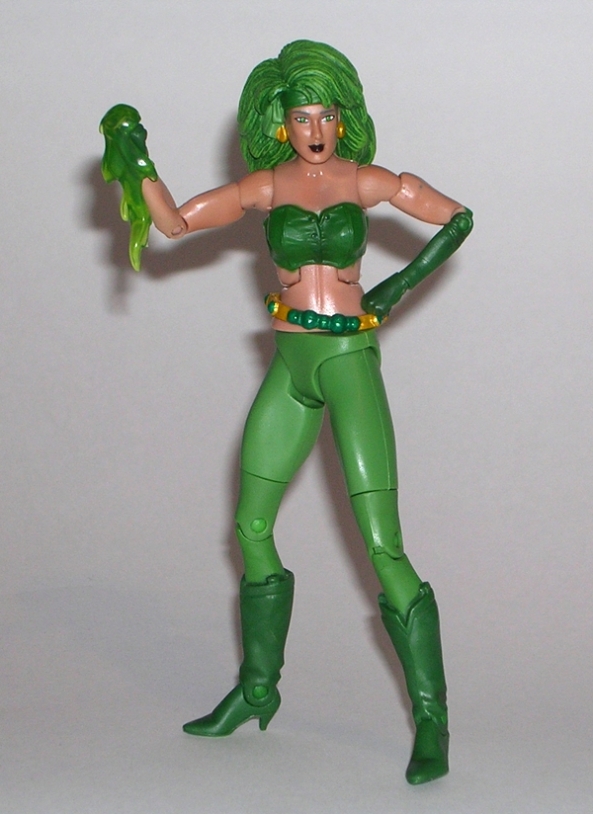 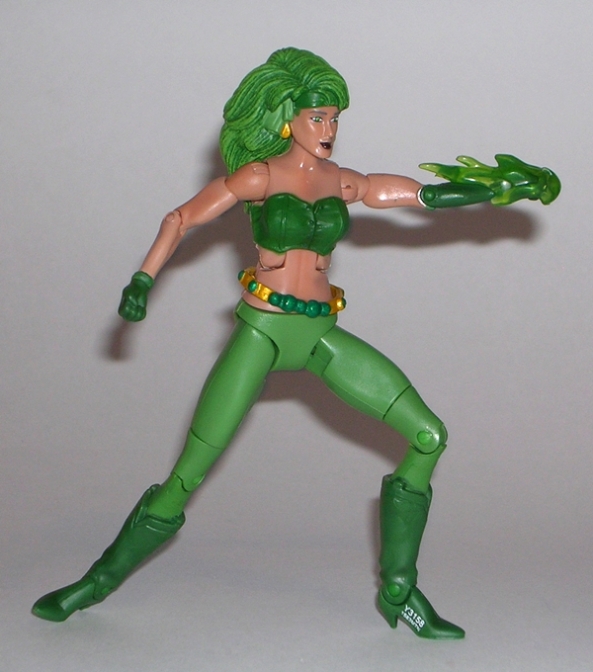 Fire does come with an effect part, which is a translucent green flame that can fit over either of her fists. As far as effect parts go, it’s not bad. 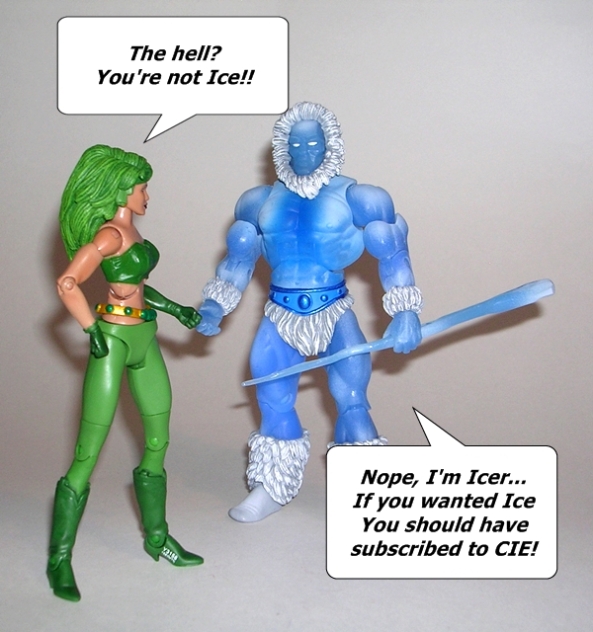 Yes, it’s a bitter time for Club Infinite Earths and Fire doesn’t help matters much. She’s a truly solid figure, and I am a big JLI fan, so I’m very happy to have her. But having her in hand makes me wonder how Ice will ever make it out and whether she’ll be difficult to get or expensive. It seems like the least Matty could have done was ship Ice to those who subbed as a consolation prize. I would have been totally fine with that in lieu of a refund, which still hasn’t shown up in my bank account. Anyway, I suppose it’s nice to know we have a few figures left to look forward to before Batzarro ships at the end of the year and makes me wonder whether the Sub dying wasn’t such a bad thing after all.