I had planned on keeping the Robots in Disguise thing going for Transformers Thursday, but I ran a little light on time this week, so instead I dug around in one of my drawers for a suitable substitute. Today we’re revisiting Hasbro’s Universe line. Not Universe 2.0, mind you, but the one that came before that. The one that consisted mostly of questionable repaints of a lot of toys few collectors ever wanted to see again. One of those releases came to us from the pages of Beast Machines and it was a boxed set of Tankor and Obsidian repaints. I have no idea what happened to the Obsidian figure (no great loss!) but the Tankor mold has always been one of my favorites. I looked at the Beast Machines version on FFZ a long while ago, so let’s see how Universe treated him. 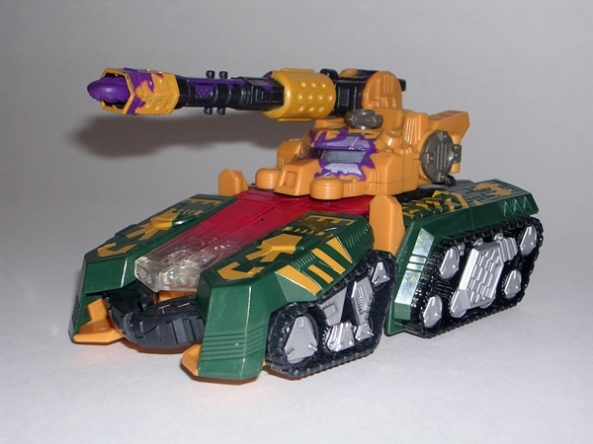 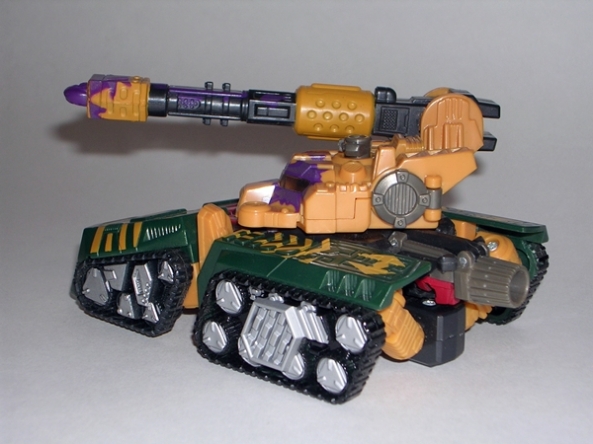 Why do I love Tankor so much? Because he’s a kick ass Cybertronian tank and for unknown reasons that may have little to do with his configuration, his turret and cannon remind me of the tanks from the original Tron. I dig his four sets of treads, all brimming with sculpted detail, his front capture claw, and the Cylon-like visor and grill on the front of the turret. He just looks all sorts of mean and nasty. It’s a fantastic design, which was obviously the result of a lot of love. Of course, the turret turns and the cannon can raise and lower and it also fires a missile that is sculpted to look like an energy blast.

Tankor had a pretty wild paint scheme to begin with, so his Universe counterpart isn’t too bad off. The green is a slightly different shade, the grey and red has been replaced with a weird tan, and he has some crazy purple and silver splotches that I like to think of as some kind of energon damage. All the great striping and chevrons that were on the original toy’s fenders are still here, the pallet has just been changed up a bit. And yes, if you’re wondering, the hatch that opened to reveal his Predacon spark crystal on the original toy, now opens to reveal a painted Decepticon insignia. Cool!

Transforming Tankor into robot mode is both simple and clever. His legs do a cool flip to wind up on the other side of his torso and the translucent red plates wind up as armor for his arms and shoulders. As a robot, Tankor’s design is just as grizzly and warlike. His huge, bulky arms have built in saw blades and his hands are serrated lobster claws of death. You do not want a hug from Tankor. It’ll f’ck you up! The deco remains about the same as when he’s in tank mode with the tan replacing the grey and some gold detailing on his chest rather than the yellow from the Beast Machines figure. I can’t say I like it better than the original toy, but it’s cool that it makes him unique amidst my little army of Tankors.

The head sculpt is fantastic! Tankor sports a deep set visor with light piping that reveals a single Cylon eye and if you move his head it seems to travel from one side to the other. He also has a giant bear trap of a jaw that is articulated. Mounted on his left shoulder is his enormous cannon, proving that he doesn’t lose any firepower no matter which mode you find him in. 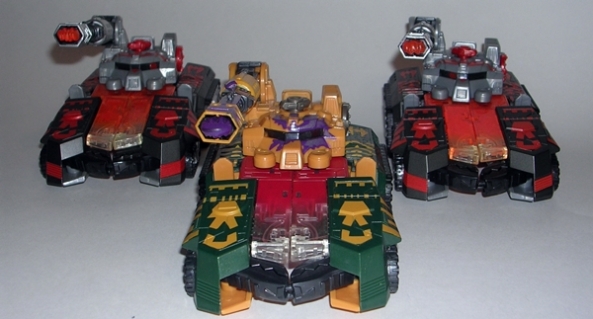 And so in the end, Tankor didn’t do too badly at the hands of the crazed colorists in charge of the Universe line. It’s not an improvement, but like I said, having one uniquely colored Tankor gives me a commander for my drones, and that’s cool. I will, however, concede that this release was a wasted opportunity for a better repaint. I would absolutely love to get this guy in traditional black and purple Decepticon colors, or maybe just black and steel grey. But truth be told, I love Tankor no matter what color he is, and I try not to think about how sad it is that he’s a perverted reincarnation of poor, noble Rhinox.