It seems like forever ago that I got Hasbro’s wave of IDW Deluxes and yet I’m still working my way through them. Today we’re going to check out Trailcutter, better known to some of us old GeeWunners as Trailbreaker. This release is a double payoff for me because a) We never got Trailbreaker in the Classics format and b) He’s a Hasbro release based on a Transformer as he appears in a comic that I’m actually reading!

I’ve spilled a ton of electric ink on how much I love the idea of comic packs, so I’ll try not to waste a lot more time doing it here. Suffice it to say the packaging on this guy is fantastic. Trailcutter comes packaged in his robot mode in front of a spotlight comic and on a very G1-inspired cardback. An action figure and a comic… how can you go wrong? I’ve been no stranger to Transformers comics off and on over the decades. I was a faithful reader of the original Marvel book right up until the end… more or less. I dabbled in some of the stuff that followed and even found that old Armada comic to be surprisingly good. I enjoyed The War Within and I loved The Last Stand of the Wreckers. But it wasn’t until More Than Meets The Eye that I once again went all in on a Transformers title. MTMTE isn’t just a great Transformers comic, it’s one of the best comics I’ve ever read… and I’ve read a lot of comics in my 40+ years on this planet. On paper it sounds like the dumbest idea for a TF comic ever and yet in execution, every panel is like gold. This included issue, a Spotlight on Trailcutter, gives you just a mere morsel of that book’s awesomeness. Trust me, if you aren’t reading MTMTE go read it and come back. The first four volumes are available already in TPB. Go now… I’ll wait! 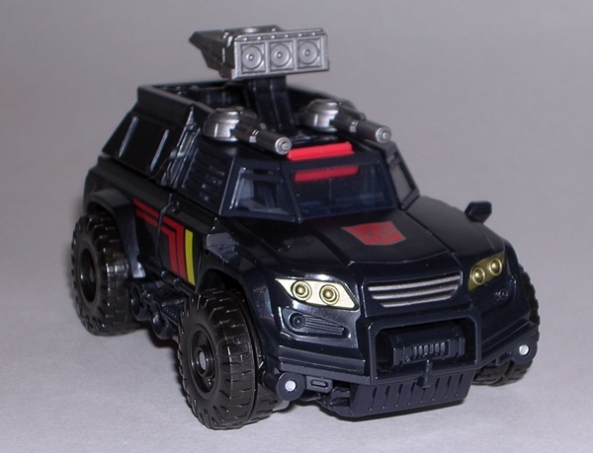 Oh shit, I forgot. We’re here to talk about a toy. So… moving on to the figure itself, let’s start with Trailcutter’s vehicle mode. In keeping with tradition, he’s still a black SUV. For some reason this guy reminds me a lot of Generations Perceptor, although Trailcutter has four wheels and isn’t a halftrack. I dig the countours of the front of the vehicle and the sculpted winch on the bumper. Also, the striping on the sides and the bold Autobot emblem on the hood all give the eye something a little more than just black to look at. Trailcutter isn’t your typical SUV out to bring the kids to a soccer match either. Nope, he’s got his big forcefield emitter sticking up off the top of the roof and two guns facing forward. If you want to make him a little less threatening and more street accessible, you can take the cap off the back of the SUV and remove his guns, but the emitter remains. He’s a nice looking vehicle, but he does share a common problem with many Deluxe Transformers these days… he’s kind of small. He’s close to the same size as many of the Classic/Universe/Generations cars of yesteryear, but he’s an SUV, so he should be bigger. 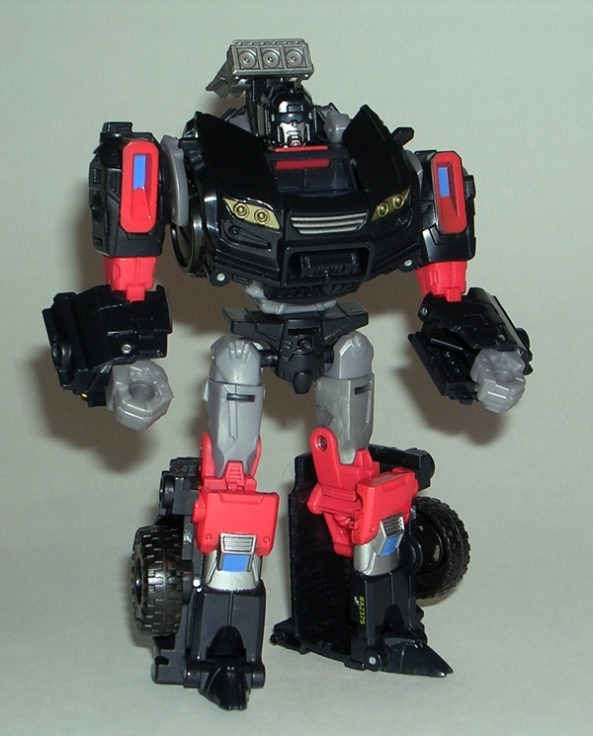 Transforming Trailcutter into his vehicle mode is a little fidgety. He’s one of those figures where everything needs to be just perfect to get him to fit together in alt mode and even then, it’s a little tough to close all the gaps. Getting him into robot mode, on the other hand, is pretty easy. The result is overall good, but I he’s not getting away from me without getting a few nits picked. Let’s deal with those first. He doesn’t have an Autobot symbol on him in robot mode. It’s a tiny oversight that just bugs me a bit, so let’s let it go because the bigger issue is size. Just like his vehicle mode, his robot mode is small. Yes, it’s been an ongoing issue with Deluxes ever since TF: Prime rolled onto the scene. It doesn’t always bother me, but Trailcutter should be at least as big as most of his Autobot peers. He stands just as tall as your average Classic Deluxe, but that’s including his forcefield emitter. In reality his head comes up to the shoulders of most of his peers. He still displays just fine with my Classics figures, but in perfect world he would have been bigger.

All that aside, I really dig Trailcutter’s robot mode. He has a nice and powerful broad-shouldered look that doesn’t come away as being stocky despite his relatively shorter height. The way the front of the vehicle forms his chest is just the kind of classic Autobot design that I can never get enough of. And the headsculpt is a home run, which I’m happy to say homages the G1 style a little more than the comic style. As much as I love the current crop of Nick Roche IDW art, I’m not always so enamored with the organic quality of the faces. I know why they do it, to make the characters more expressive and easier to relate to, but I prefer something more mechanical and G1 in my figures’ portraits. The deco here is phenomenal and driven mostly by the color of the plastic over actual paint apps. You still get plenty of the black from the SUV showing up, but it’s now mixed with some beautiful red and grey accents and just a smidgen of blue. 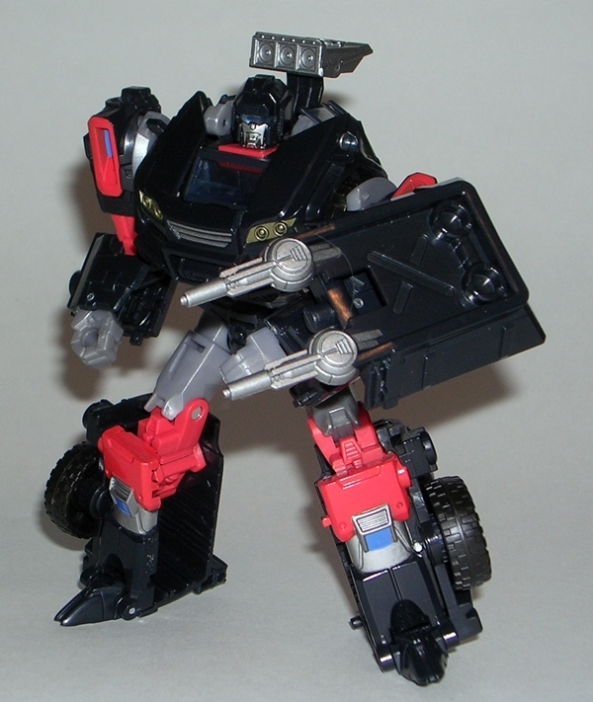 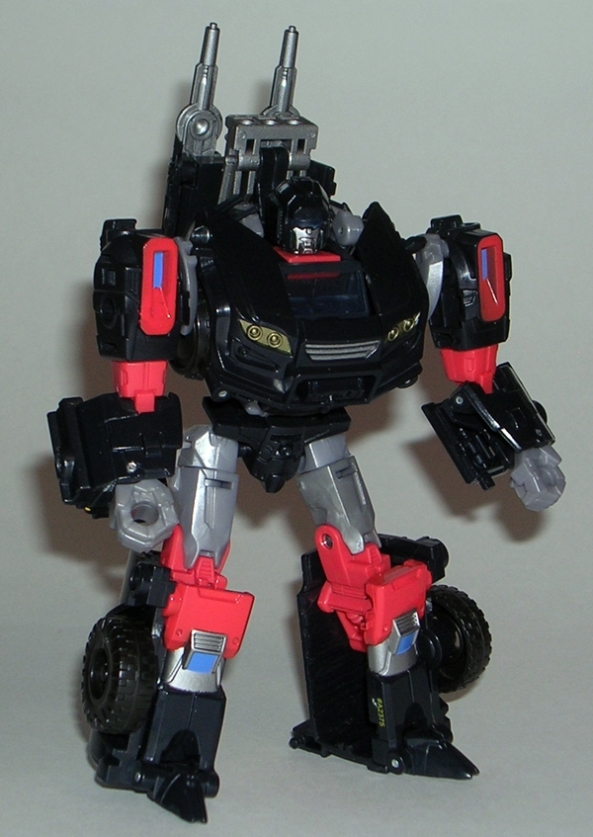 Trailcutter comes with a shield-gun thingy that basically forms the cap of his SUV mode. Some of you might have thought I was going to call him out on this piece, but, I don’t have a big issue with it. It’s not integrated into the robot mode, so you can set it aside if you want. There are also a couple of different ways you can peg it onto his back if you want to store it.

So, yeah, Trailcutter has his shortcomings… see what I did there? But I still like him a lot. In fact, he’s definitely my favorite of the IDW Comic Pack wave so far. He has a great design in both modes and Hasbro’s team did a phenomenal job reverse engineering this guy from the IDW artwork and making him into a great looking and ultimately fun figure to play with. He’s already got a spot on my Classics shelf, filling a hole that has been vacant for far too long. Now I’m chomping at the bit to find Hoist, so my original Autobot updates can be yet one more step closer to being completed.

That’s three down, and one more IDW Comic Pack from the intiial assotment to go. Next week, we’ll check out Orion Pax!