TURTLES! Did you think I forgot about the Turtles? Well, I kind of did. I was planning to stop buying these figures after the initial wave of core characters, because I don’t really watch the new series and I’m really looking to cut back on the different lines I’m collecting. Nonetheless, when I go into the toy aisle and there’s nothing else in there and I want me a cheap fix, it’s hard to turn down Playmates’ TMNT line. The Wally World here looks like they’ve all but given up on selling action figures that aren’t Iron Man 3 or Star Wars, but they do still have a well-represented section of TMNT with a lot of the new figures. I decided on Metalhead, who isn’t a new figure, but one that hasn’t been showing up on the pegs around here. In fact, this is possibly the first time I’ve seen him in the wild. 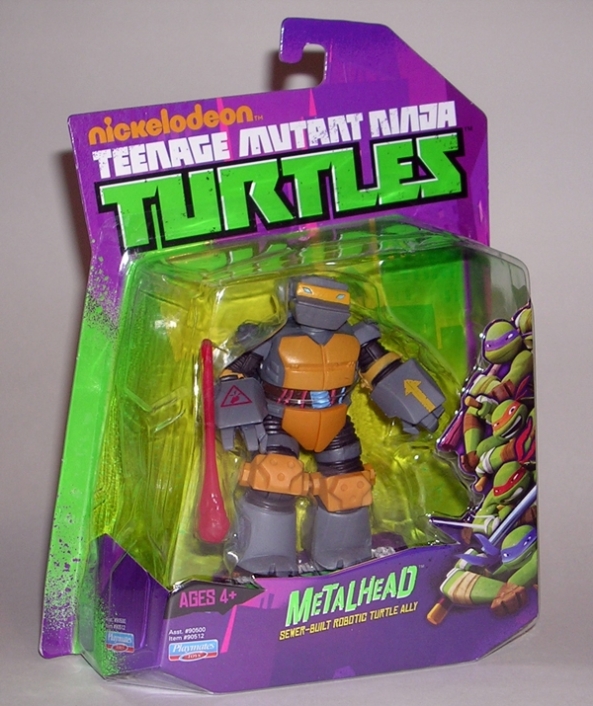 It’s hard to walk past the Turtles section in the aisle without getting drawn into it and a lot of that has to do with the great packaging. It’s exciting, colorful, goofy, and just seeing it makes me want to start rummaging through the pegs even though I told myself I wasn’t going to buy anymore. It’s nice to see Playmates get it right again with this line. I was afraid the influx of variant gimmicky Turtles would choke the pegs, but all of this stuff seems to be selling and there’s almost always something new to see here. It’s also one of the few action figure lines that the local Walmart seems dedicated to support. Maybe there’s a connection there?

The back of the card features the usual clip-out bio card and other figure available from the initial couple of waves. Looks like I’ve got them all except for Kraang. I’m not digging that new design for the android body, but if he’s the only figure standing between being complete up to this point then chances are I’ll pick him up eventually. 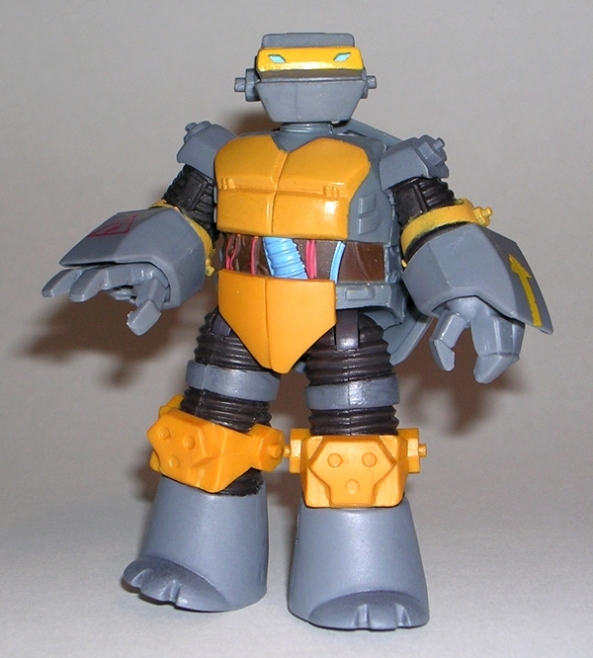 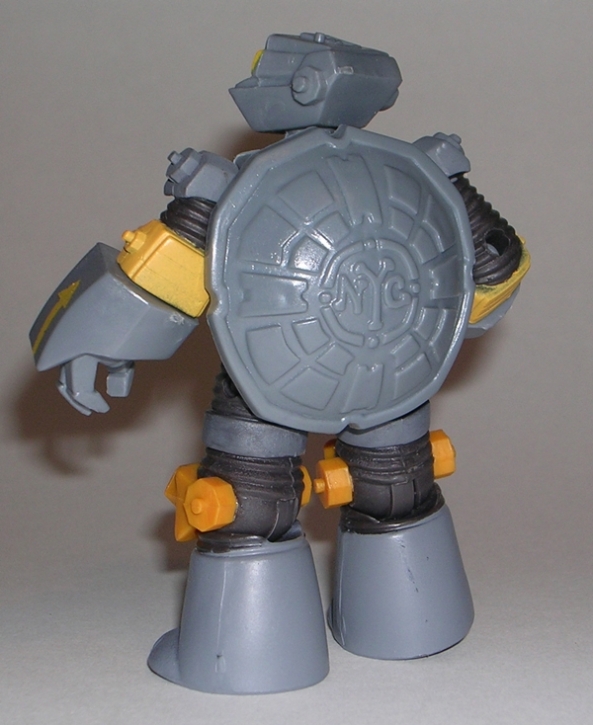 My first impression of Metalhead out of the package is that he’s less refined than the other figures. The plastic feels rougher, there’s mold flashing, and the paint is rather sloppy. On any other figure it would be a letdown, but seeing as he is a robot cobbled together from salvaged scrap, it actually works in the figure’s favor. I’d like to think Playmates did this on purpose, but other than the paint, I’m sure that’s not the case.

I do really dig the Nick re-design of this guy. He’s very Turtle-esque, but with some boxy and angular bits and a wire mid-riff that would make C-3PO proud. The sculpted nuts and bolts on his joints are a nice touch, and I absolutely love the fact that his turtle shell is a manhole cover. Brilliant!

We all know by now that if you aren’t one of the Turtles, your articulation in this line is going to suffer for it. That’s the case with Metalhead too, although this guy fares a little better than many of the other non-turtle figures. The neck is ball jointed and the arms rotate at the shoulders and swivel just under the elbows. That’s all there is from the waist up. The legs make out better with hinged ball joints in the hips, hinges in the knees, and swivels just under the knees. In the end he has just enough useful points so I can have some fun playing around with him.

Metalhead doesn’t come with any accessories, per say, but you do get an energy blast style missile that fits into the hole in his right hand. There’s no firing mechanism, but if you flick the back of it just right you can get some distance on it. I’m not usually a fan of the missiles, but I do believe I may display him with the blast coming out of his hand. It just looks cool.

I picked up this guy for eight bucks and change and I’m really happy with that. In fact, I’m rather amazed that the price on these figures hasn’t gone up all that much. When they were first released they were between seven and eight bucks each. Nowadays they seem to have leveled out closer to eight and nine, but that still makes them some of the better deals in the action figure aisle. This line continues to provide simple and honestly fun figures at a great price, which is something that few of the other companies can seem to do these days.