Speeding along, hot on the trail of his Autobot brother Prowl, comes the second in Takara’s line of Masterpiece Datsuns: Bluestreak… or just Streak if you prefer. It took me a lot of hemming and hawing before deciding to buy Prowl, mainly because of Takara’s less than stellar Quality Control on these toys, and I’d be lying if I said that wasn’t also the case with Bluestreak here. Nonetheless, I rolled the dice, hoping that since my Prowl had some issues, maybe it was my chance to get lucky here and the gamble paid off! Normally, I do special releases like this in two parts, but since Bluestreak is a straight repaint of Prowl with a new head, I think we can do him justice in one day, particularly if I can just assume that you’ve come equipped and have already read the feature on Prowl.

As expected, we get the same style of enclosed box as Prowl. The layout and deco are all identical. Streak comes packaged in his auto mode with his gun beside him. The package isn’t flashy, but I do enjoy the collector friendly simplicity of it. It’s durable and should serve collectors well for storage. Inside you also get a pouch with a folded instruction sheet and a profile card. If you opted to pay a little extra, you might even have a collector coin!

So, first thing’s first. My Streak arrived without any of the QC issues that I feared. In fact, I’d dare say that the paint on this guy is just about perfect. This is the kind of quality that I like to see on a Masterpiece figure. Well done, Takara. Next up, the deco is just dead sexy. The combination of metallic silver and high gloss black really does it for me in spades. Just calling it metallic silver doesn’t do it justice. It’s some kind of grey-silver mix that looks just outstanding in person. As for the rest of the paint, well the lines are crisp and clean, right down to the Autobot emblem stamped on the hood and, speaking of the hood, I do love that tiny little Nissan emblem on the front of the bonnet. Gone is the police light bar on the roof and in its place we get the stylish T-Roof with some nice silver striping. Other than that, the sculpt here is identical to Prowl right down to the side view mirrors on the front fenders. Marvelous! 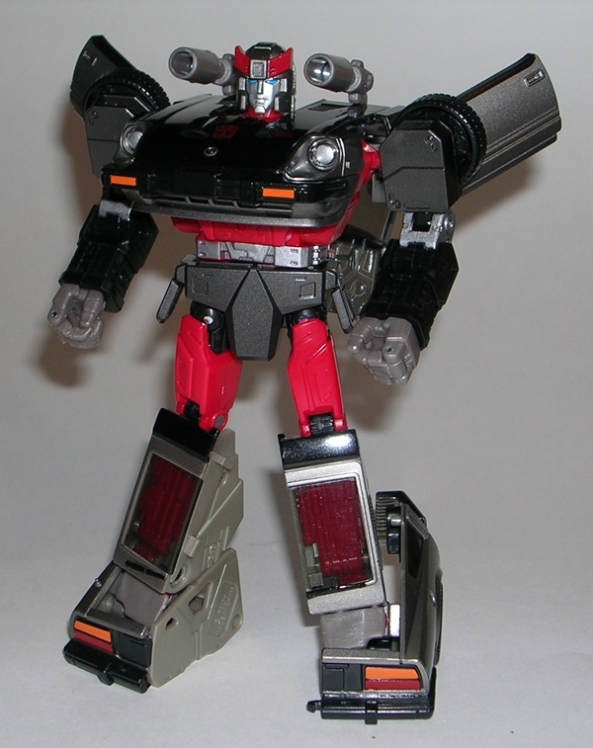 As gorgeous as Streak’s auto mode is, I still think it’s in robot mode that this guy really shines. You still get all that great silver and glossy black paint with some red plastic thrown in to make the figure pop. I really dig the way the bright red shows through his chest, particularly at the shoulders and around the neck. It’s somehow both a dark and vibrant mix that would probably be more suited for a Decepticon, but here it just makes Streak look like a bit of a badass. Of course, the sculpt is just as breathtaking here as it is on Prowl. The proportions on the figure are wonderful and the way the door wings can be positioned straight out to mimic the original toy or angled up for that little bit of animated/comic style, well that’s just a lovely touch. Yup, the legs are still hollow from the back, but if you can look at this figure and still nitpick something like that, then I feel sorry for you, because you obviously have no joy in your black little heart.

The new head sculpt gives Streak plenty of personality and serves to set him a little apart from Prowl. He has a wider crest on the top of his head and a chin plate. I’d say it’s a slightly more youthful or playful looking visage. I also think Streak’s shoulder cannons look a lot better than Prowl’s. Sure they’re the same sculpt, but the grey plastic makes all the difference over the white. It’s a good thing too, because displaying Prowl without his cannons and Streak with his deployed makes for that nice extra touch of variety when they’re standing together on the shelf.

Of course Streak comes ready for action with his rifle, the same rifle that came with Prowl, and with weapon in hand he is loads of fun to play with and pose. The joints on my Streak are nice and tight, even more so than on Prowl and the articulation is just as excellent. I particularly dig the rockers in the feet, which allow Streak to hold a wide stance and still keep his feet flat on the floor. It still amazes me that Takara’s engineers were able to get a design that looks this good and is still so delightfuly articulated.

My inner dialogue argued with me over whether I was really going to spend $80 on a straight repaint of Prowl. I’ll concede that for a while I was considering skipping Streak until Smokescreen came along. Bluestreak was always the odd bot out of this trio and I never really had any love for the character, at least not like I do for Prowl and Smokescreen. Then the OCD part of my brain barged in on the conversation and pointed out that we have no choice. We simply cannot just have two of the three on the shelf. That would be clearly unacceptable. In the end, Mr. OCD was right. These guys look spectacular together, and with a deco so drastically different, I didn’t get a single ounce of repaint fatigue when opening up Streak and checking him out. What’s more, with the beautiful paintwork on Streak, I’ll be going into the Smokescreen release with a lot more confidence than I had going into the purchase of Prowl. Bring him on, Takara!