Wow, this one has been a long time coming. MP-13 was first released at a time when I had expended my toy buying budget. As much as I wanted him, I was able to just say no to charging him. Remember my motto about toy collecting, folks, if I can’t afford it, I don’t use plastic to buy plastic. I stay out of a lot of trouble that way. By the time I was ready to buy him, the Hasbro version was revealed and I held out to see if I could find that one. As it turned out, I never did get time to make that two-hour round trip to my nearest Toys R Us and he went for insane prices online, so buying MP Soundwave just fell to the wayside. He fell back on my radar recently when the second production run shipped to e-tailers at about $30 less than the first and when BBTS dropped him down to $120, it seemed like the perfect time to toss him into my Pile of Loot and ship that stuff out the door. I could probably knock this feature out in one day, but to be honest, I’m in the middle of my craziest-busiest time of year so I’m going to welcome the opportunity to pad it out into a two-parter. Today we’ll look at the packaging and Laserbeak and tomorrow we’ll check out that master of charisma, Soundwave. 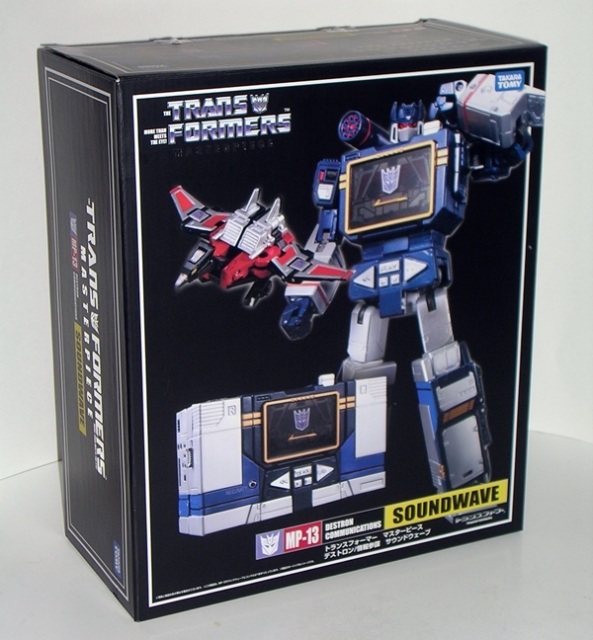 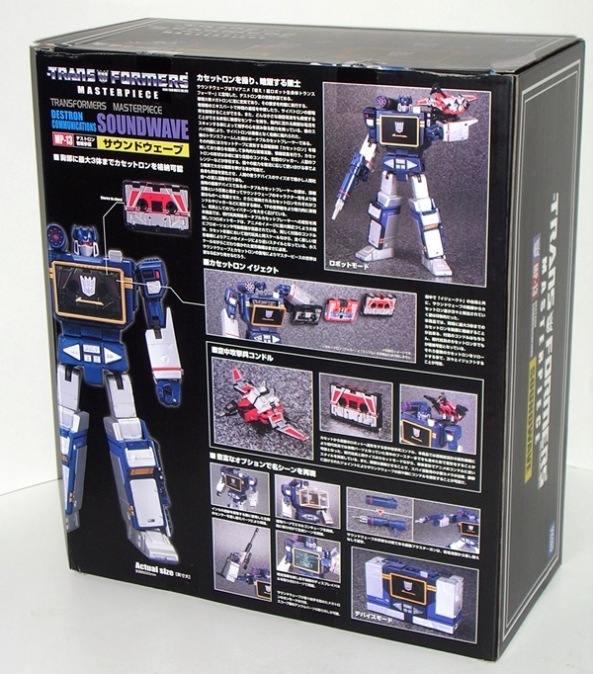 Holy crap, this is a big box! You have to remember that the first MP figures that I picked up were Prowl and Bluestreak and they came packaged in their alt modes in tiny little boxes. One of my friends overseas kept telling me, “Don’t be scared, but they’re going to come in really small boxes!” But Soundwave is packaged in his robot mode in a box that is large enough to make me feel comfortable with the gravitas of my purchase before even opening it. It’s a simple, enclosed box with a deco is quite similar to what we saw on the Datsuns. You get a photo of Soundwave and Laserbeak on the front in their robot modes as well as Soundwave in his tape deck mode. The bottom right classifies him as MP-13 “Destron Communications.” Niiiiice! The back of the package has a whole bunch of shit that I can’t read as well as various shots of the toy and its various features. 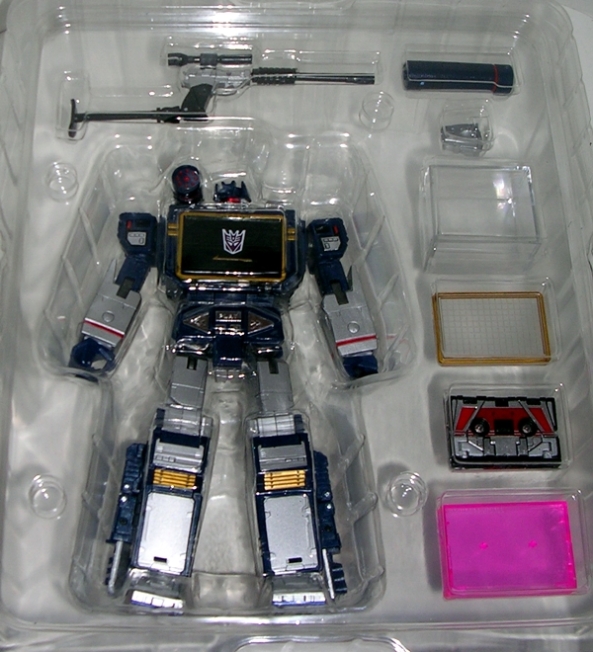 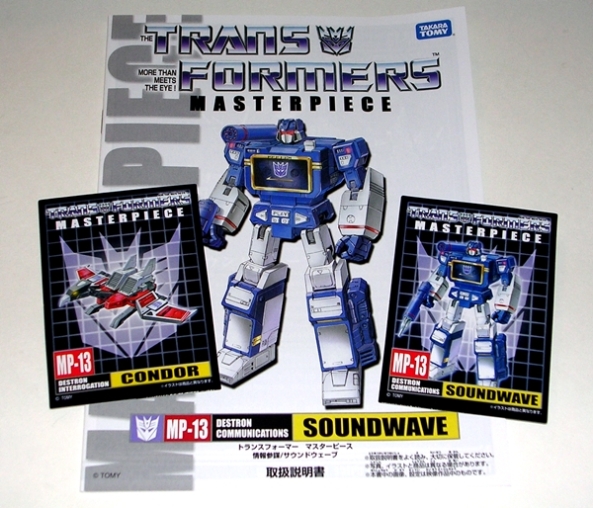 Open up the top or bottom and you can slide out the covered clear plastic tray. Soundwave is packaged in his robot mode with all kinds of extra goodies surrounding him. You also get a baggie containing the instruction booklet, two profile cards (one for Soundwave and one for Laserbeak). There are also two cut-outs on the last page of the instruction booklet to use as insert graphics for Soundwave’s chest. But we’re saving Soundwave’s robot mode for tomorrow. First, let’s get him into his tape deck mode. 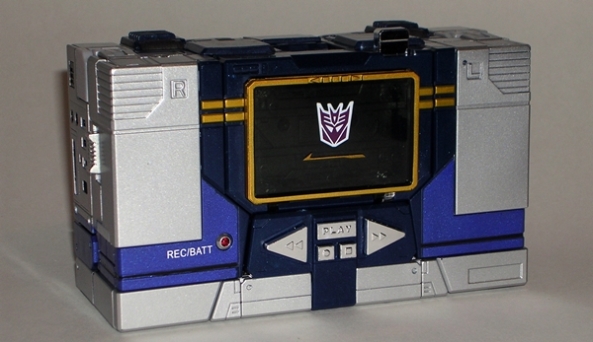 One thing I was really curious about was Soundwave’s transformation engineering. The original toy had a frightfully simple transformation and yet it was still one of the more animation accurate robots in the toyline. Granted that was saying much when you compared him to the likes of Megatron or Ironhide. Anyway, I guess I was skeptical over just how much of an upgrade the design could possibly get at the Masterpiece level. Well color me suitably impressed. At its core, the toy still retains the basic engineering as the G1 toy (arms and head fold back and legs wrap up and around), but it throws a lot more finicky stuff into the mix to accommodate for the robot mode’s better proportions and improved articulation. I was able to transform MP Prowl without even looking at the instructions, but I’m not ashamed to say that Soundwave stumped me at a few stages. Keep in mind, since the toy is packaged in robot mode, my first attempt was going into cassette mode. 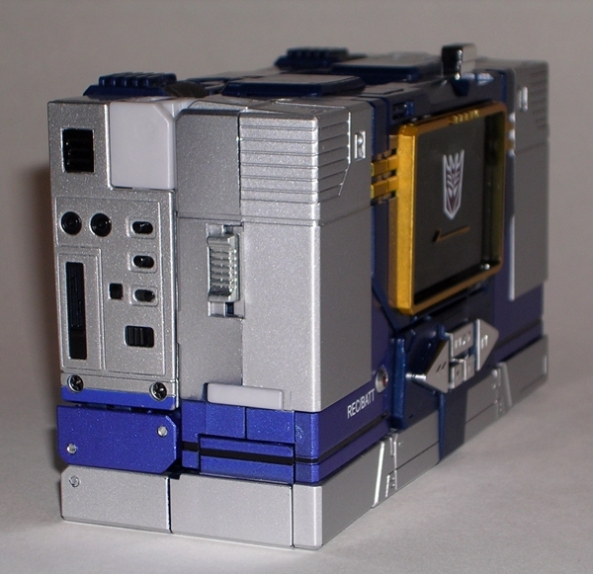 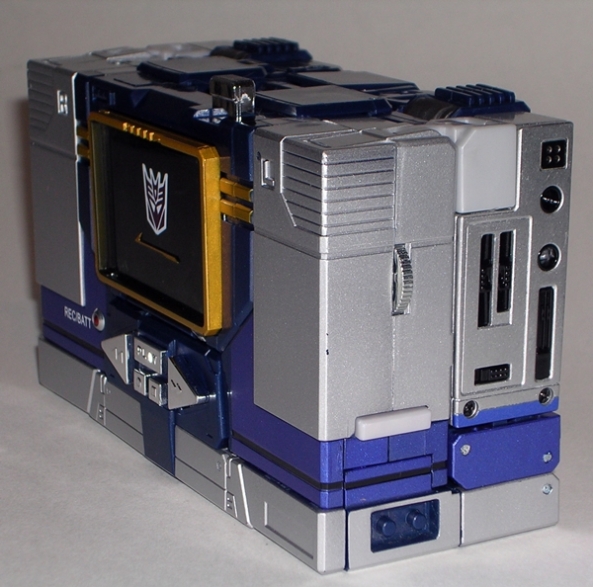 And so, for the first time in a long time we get a new Soundwave figure as he was intended. He’s not a jet or a communications truck or any of that nonsense. For the kids at home, this is a tape deck. Say it with me, “a taaaaape deeeeeeck.” Back when I was a kid, we used to use these primitive devices to listen to music that was magnetically recorded on audio cassettes while we were fighting off dinosaurs attacks and looking for caves to live in. It’s kind of ironic that few Transformers were more inherently characterized by the nature of their alt mode than Soundwave, only to have that very alt mode become irrelevant by the march of technology. I think the last mainstream release of Soundwave as a cassette deck was in the Titaniums line. There aren’t many surprises to be had in MP Soundwave’s tape deck mode. Proportionally speaking, this one is beefier than the original toy, but it’s quite accurate to the animation from the front. The beveled corners of the tape door give it a smoother look than the angles of the original version. There are plenty of faked out controls and imputs on the sides. In fact, look at all those inputs? The last tape deck I owned had a headphone jack and that’s it. What the hell are all those inputs for??? 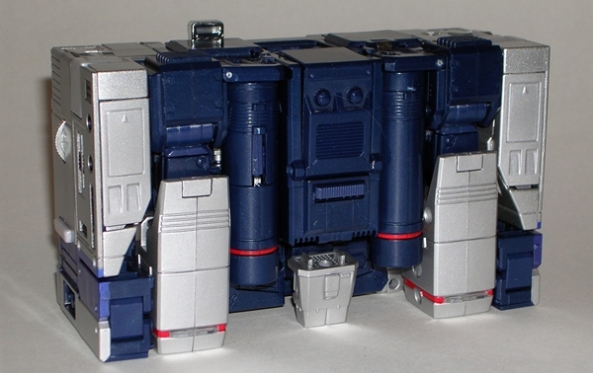 It’s worth noting that the back of the MP figure is rather unfinished when compared to the original toy. You can still clearly see where the arms are and the “batteries” are just out there and exposed whereas the original toy had them hidden away behind a compartment with a belt clip. I suppose that’s a criticism, but not one that bothers me at all. If that’s the sacrifice that had to be made to make this guy work, it was a good one. And despite the unfinished back half, this thing still holds together quite well. 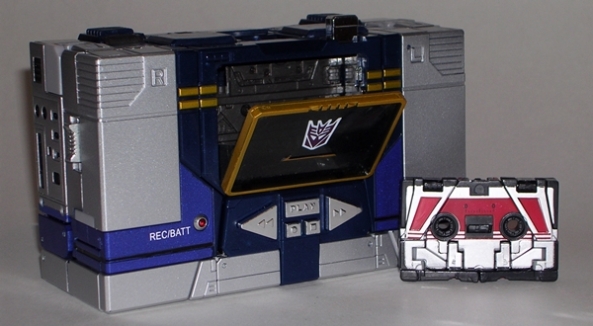 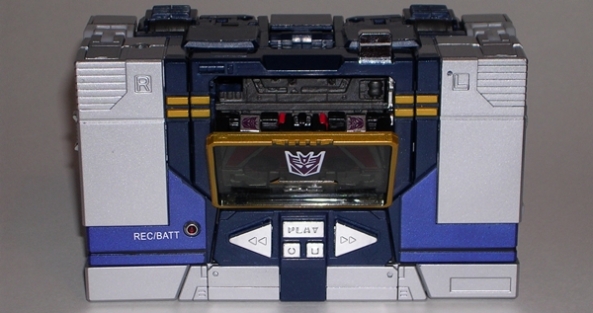 The tape door has a crisp and beautiful Decepticon insignia printed on it as well as some subtle little details etched into the clear plaste. As expected, the tape door is spring loaded and opens with a press of the eject button. Naturally, you can fit the Laserbeak cassette into the player. Actually, you can fit up to three cassettes into the player at a time. I know it doesn’t look like it, but the back of the compartment pushes back to accommodate them. You can even put original G1 cassettes in there too. And that brings us to Laserbeak… 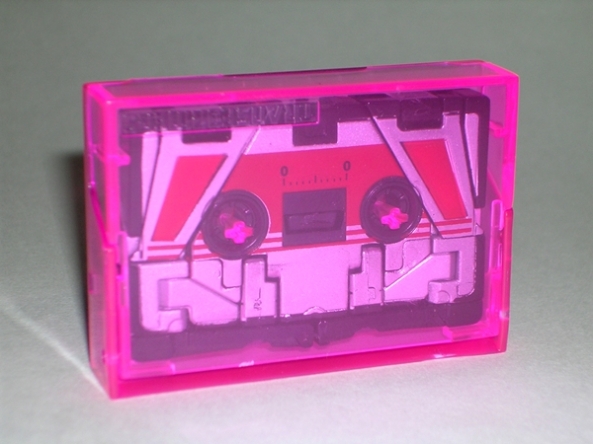 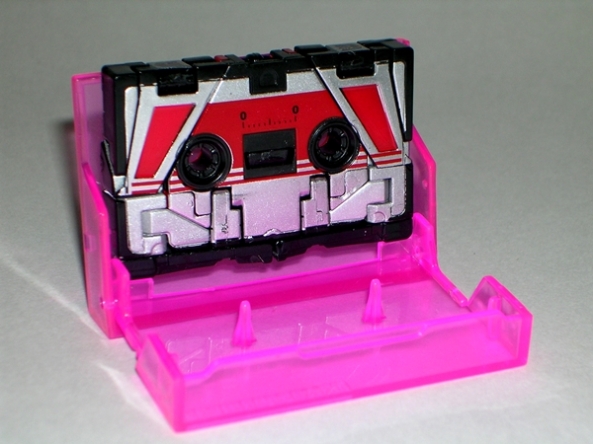 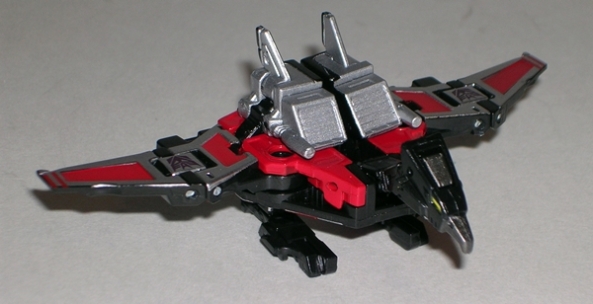 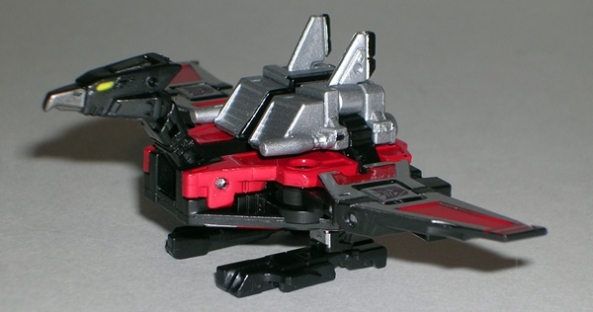 Laserbeak, or Condor if you prefer, comes in a translucent pink plastic cassette case and he is exactly the same size as the old G1 cassettes. There’s not a lot to say about him in cassette mode, but I could gush on and on about how remarkable the engineering on this guy is because the engines on his back are no longer separate pieces but are now integrated into the transformation. It’s simply mind blowing how cool it works, although it isn’t without some sacrifice. The engines are notably smaller and the barrels for his guns are a lot shorter. Still, I love this little guy to pieces!

That having been said, I’m still a little torn on which I prefer in condor mode, Masterpiece or Vintage? I know, it sounds crazy, but there’s still a certain something about the big chromed out engines and guns on the original Laserbeak that lights my fire. It’s damn cool that the old cassettes work with MP-13 because I can have the best of both worlds and not have to choose.

And that’s where I’m going to break for today. I’ll be back tomorrow to check out Soundwave in all his robot glory along with the goodies that he comes with.