Scattered throughout the last few months I’ve been posting features of stuff that I’m finding in my Toy Crawlspace, and some of that has been a cornucopia of Enterprise figures. The Crawlspace hunt has slowed down lately, partly because I’ve been too busy with Christmas coming, and partly because I’m still waiting for the chemical fog bomb I set off to kill the mutant bat infestation that has taken root up there. Anyway, it’s going to be a real struggle for me to keep daily content going this week with how crazy-busy I will be, so I’m trying to tackle some quick and easy stuff. And that’s where Archer comes in, because he’s quite similar to the Malcolm Reed and Travis Mayweather figures I looked at not too long ago. We should be able to do him justice rather briefly. 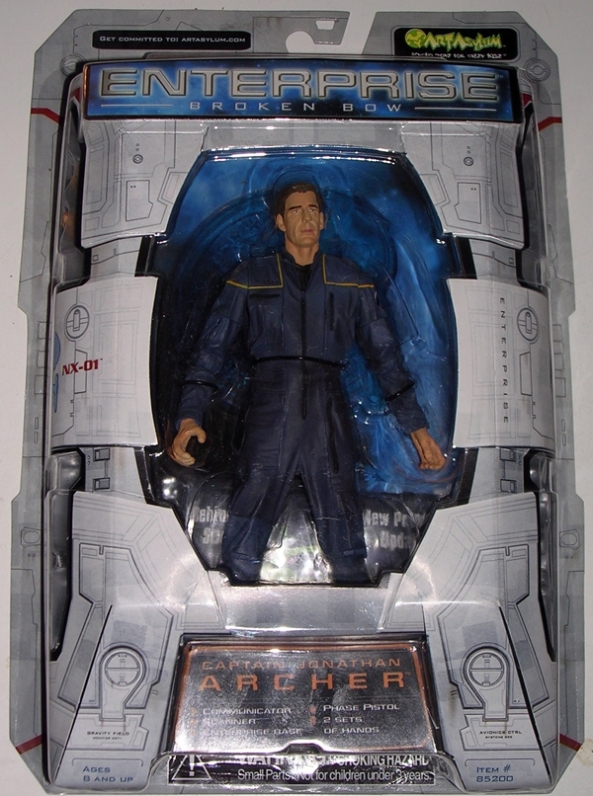 There’s the Enterprise packaging. It’s a card and bubble, but it’s huge and the clever use of printed inserts make it look more like a window box than an actual carded figure. The presentation here is great and you can tell a lot of love went into it. The inserts are printed with all sorts of panel lines to make it look like the hull of the ship and the window displays the figure quite nicely. There are even cutouts on the side panels to show off some of his gear. If you’re careful and have a razor blade handy, you might be able to preserve the packaging, but I just tore this sum’bitch open. 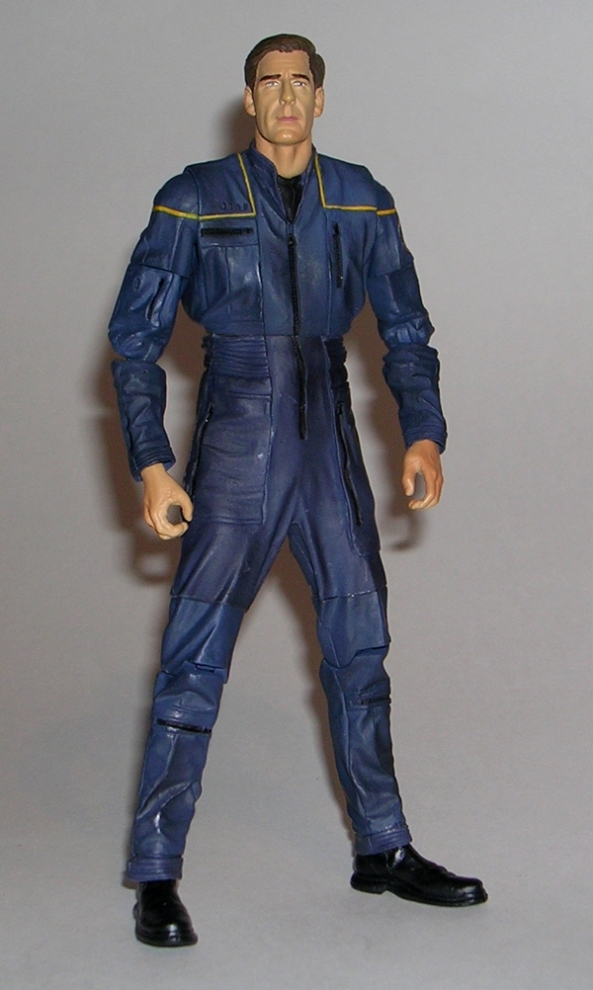 As I’ve noted before, I like the Enterprise uniforms. They look practical and are convincing as something our early deep space explorers might actually wear. They are not, however, the most exciting design for an action figure. Nonetheless, Art Asylum went out of their way to make it something special. The torso part of the jumpsuit is made of soft rubbery plastic laid over the figure’s buck. It’s a cool effect that adds to what could have been a rather boring figure. The suit is loaded with sculpted wrinkles, cinching around the belt, zippers, and it features the departmental piping on the shoulders and the Enterprise patch on the shoulder.

The Art Asylum inmates have always been pros at sculpting great portraits for their figures and Archer here is no exception. The likeness to Scott Bakula is quite impressive and the paintwork is pretty clean. You need to get in really close to see any tiny inconsistencies in the hairline.

If you’re the kind of person that doesn’t want your Starfleet Captain sitting on the bridge all day, you should find the articulation here pretty accommodating. The arms have ball joints at the shoulders, swivels the biceps and wrists, and they are hinged at the elbows. The hip joints are concealed by the jumpsuit, but they feel they have some kind of rotating hinge offering a good range of motion. The legs have swivels in the thighs, hinges in the knees, and ball jointed ankles. Archer can swivel at the waist and features a ball jointed neck with a generous range of movement.

As for accessories, you get the same assortment of Starfleet Gear that came with the other Bridge Officers: A phase pistol, a communicator, and a tricorder. You also get an extra pair of hands. The communicator and tricorder are pretty small and difficult for him to hold all that well, but the phase pistol is still a really cool piece, which Archer can wield brilliantly. Finally, you get the translucent blue Enterprise base stand, which looks beautiful with the figure standing on it, but inexplicably has no pegs to secure him to it. Weird!

If you’re one of the minority like me that liked Enterprise, then you need this figure in your life. He represents the usual fine sculpting and craftsmanship that I’ve come to expect from Art Asylum and he looks damn fine on the shelf alongside his fellow Starfleet Officers. My only real gripe with this line was that we never did get the entire Bridge Crew in their jumpsuits, and that makes collecting these a little bittersweet. Oh yeah, this figure was also available in a larger bridge base set, which included the Captain’s Chair and a piece of the bridge which could connect to others. I do believe I have one of those kicking around here still in the box, but I haven’t unearthed it yet!