Hey, it’s the first Transformers Thursday of 2014! As promised last time, I’m going to start mixing it up on TFT with both modern and older stuff and today we’re continuing with the modern. Rhinox was one of the last Transformers to ship in 2013 and he was a nice surprise because he’s a Beast Wars Voyager! Holy crap! As a fan and collector I’ve always had an undying love for the Beast Wars TV series, but that love never carried over to the toys. Oh, I had quite the collection of Beast Wars figures, but they never really captured the magic of what came before and what has come since. I ended up unloading that collection (except for Megatron) during one of the Great Toy Purges and I can’t say as I regret it. Needless to say, I was excited to get a modern Rhinox in hopes that he could help me find some affection for a Beast Wars figure. 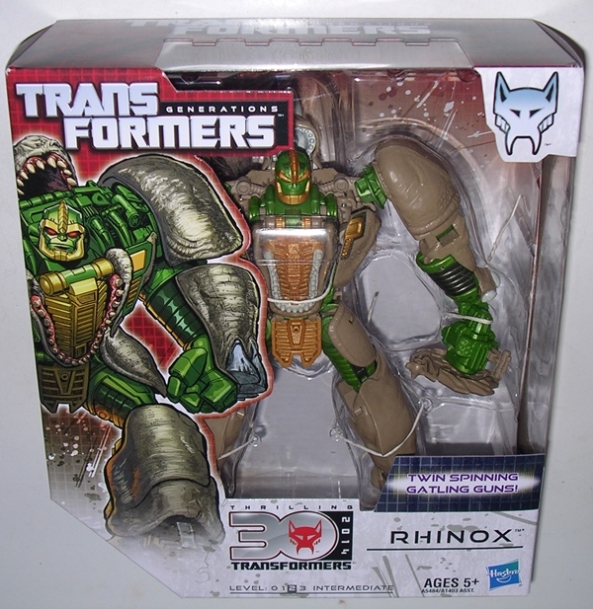 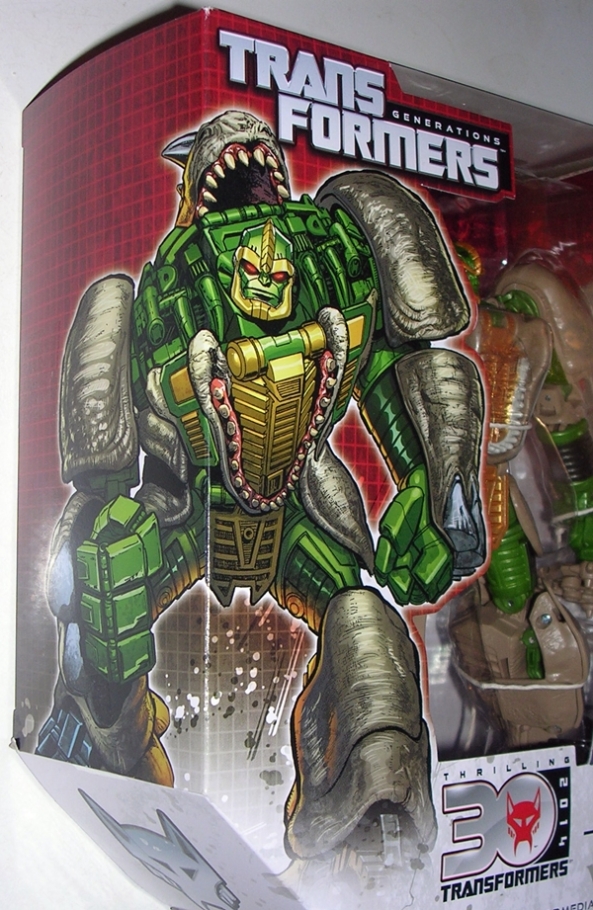 The package consists of a familiar window-style box similar to what we got for the other Generations Voyagers. This one still keeps some of the G1 inspired grid pattern, but also embraces the white granite look of the Generations comic packs. The box retains the “Thrilling 30” moniker, but it’s labeled as a 2014 figure and brandishes the Maximal insignia in several places. The wrap-around character artwork is absolutely killer and Rhinox himself is packaged beside it in his robot mode. I really can’t wait to get this guy out and transform him, so let’s start out with his beast mode. 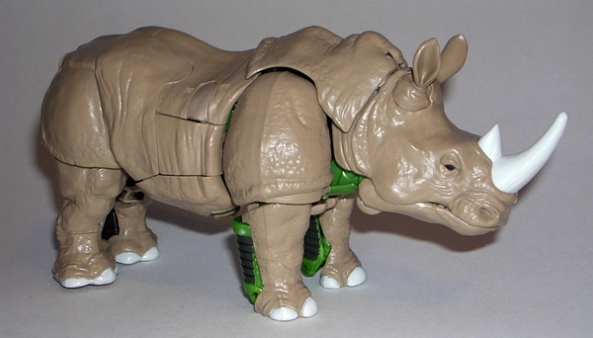 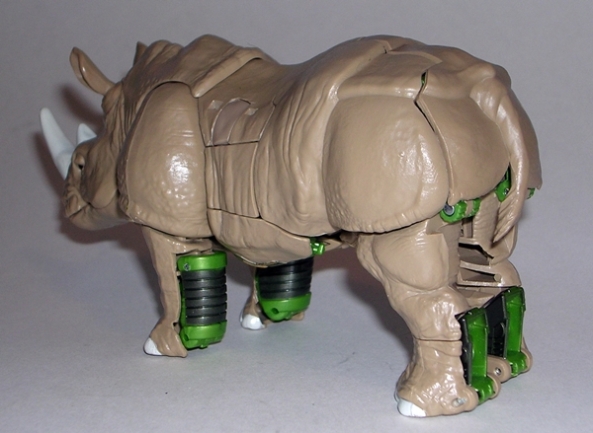 Yup, Rhinox is a rhino, and a mighty fine looking one at that. Sure, there’s seaming situated all around him, but the plates all lock together quite well, minimizing any unsightly gaps that advertise him as a shell-former. The sculpt here is quite good and consists of leathery looking skin and a very convincing rhino head. There is some obvious, green robot kibble visible on the backs of his legs, but apart from that you’d need to pick this guy up and look underneath to see that anything really funky was going on. The rhino covering is mostly made up of hard plastic, although softer stuff is used for his hinder, ears, and horn. There isn’t a lot of paintwork on this aspect of Rhinox, but he doesn’t really need it. Overall, it’s a pretty good rhino disguise. 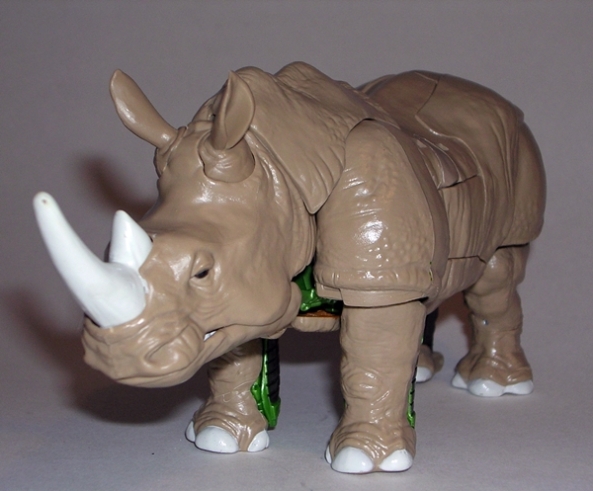 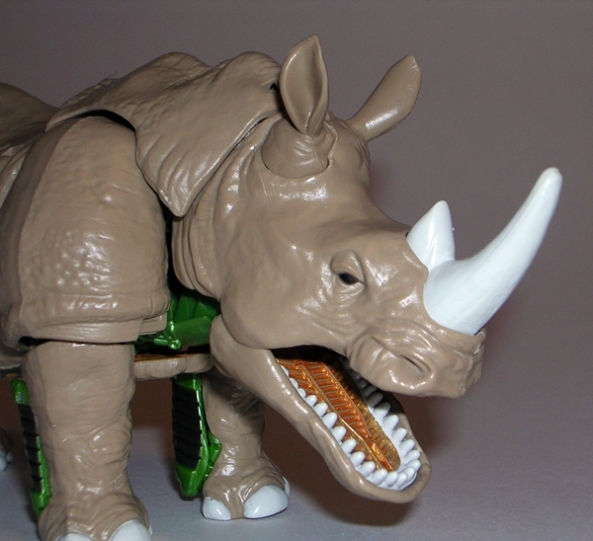 If you’re looking for a super-articulated rhino, however, you will be disappointed. Rhinox’s beast mode sports very limited articulation. His legs can move forward and backward a bit, but it isn’t really a natural movement and the more you move them the more you risk knocking the plates out of whack. He can, however, open his mouth and bite things. Honestly, I’m not terribly upset about the limited articulation in beast mode because this guy is going to spend very little time as a rhino.  I’m mostly happy that he locks together so well and stands well and he does indeed capture Rhinox’s hilariously grumpy animal visage. 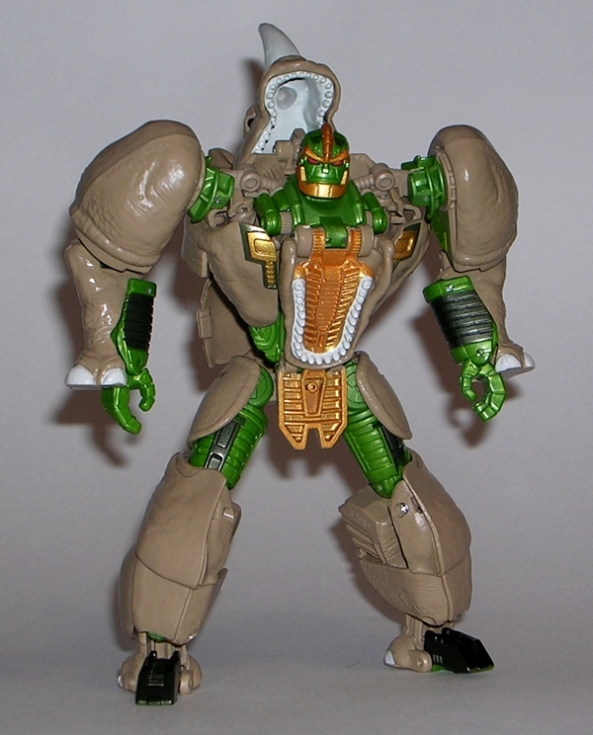 Of course, I didn’t buy this ticket for the Rhino Show. The rhino is just the warm-up band. No, I got this guy for loveable Rhinox in robot mode and let me tell you this is a glorious treatment of the character. The transformation felt a tad intimidating at first, but after going through it only once, it seemed really easy when I was done. In fact, it’s all rather obvious. Everything unfolds from Rhino mode in a logical manner, but even going back into Rhino mode is rather intuitive. Shell-formers have a habit of being frustrating, but Rhinox avoids falling into that trap. And it’s hard to argue with the resulting figure. 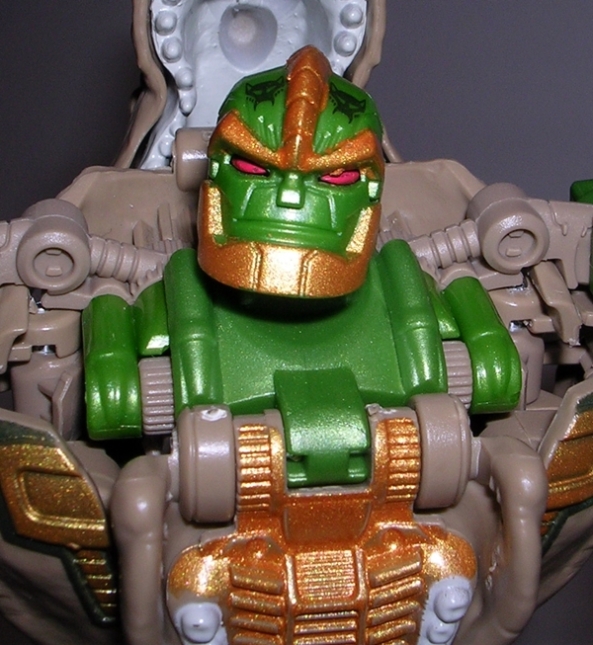 Rhinox is a fantastic representation of his animated counterpart. The proportions are great and the sculpt is gloriously complex, particularly in the chest and shoulder area where the mechanical hinges and gears mesh beautifully with the smooth rhino parts to create that amazing bio-mechanical aesthetic. I love the way the rhino mouth unfolds to form not only his chest plaste, but the plate over his pelvis as well. The subtle shift that positions the two plates that flank the chest piece is really cool too. The shoulders give the figure a properly hulking appearance and also allow for a wide range of movement in the arms. And the head? Hasbro really nailed Rhinox’s head sculpt. There’s a bit of mold flashing over my figure’s left eye, but I can probably clean that up with a razor. 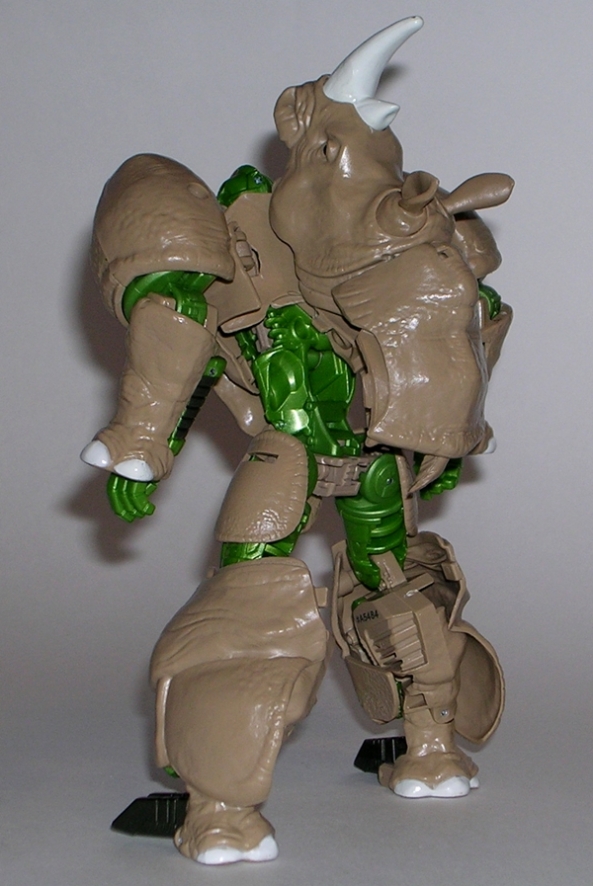 The rhino head and rhino butt lock together on Rhinox’s back very similar to the way the nosecone and tail lock together on TFC’s Uranos jets. Maybe a coincidence, or maybe someone at Hasbro is paying attention? Either way it’s cool and effective. The only gripe I have about Rhinox is he his a tad back heavy and the hip joints are rather loose. It is possible to get him standing fully erect, but it helps to lean him forward a bit. Have I mentioned the paintwork? The gold and green look amazing and contrast beautifully with the drab grey rhino parts. 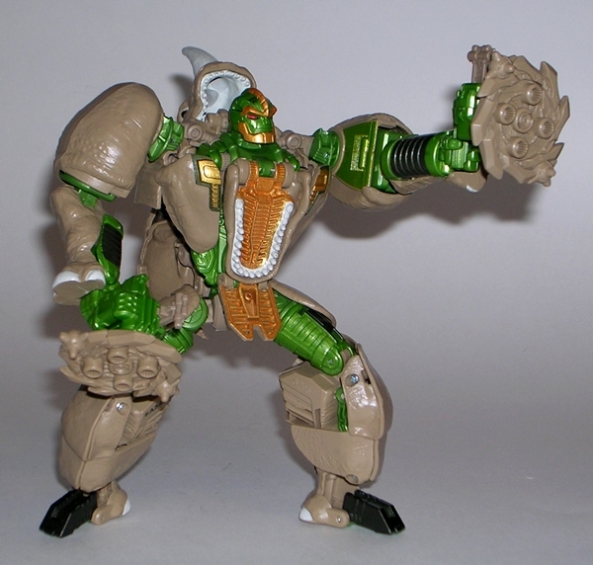 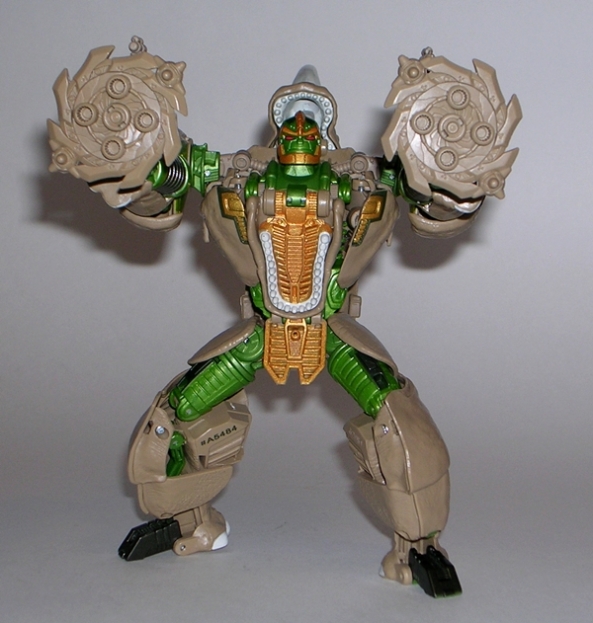 Naturally, Rhinox comes with his spinning hand cannons. The pieces clip together and serve to fill out his belly cavity when he’s in rhino mode and in robot mode he can wield them in each hand. There’s even a button on each one to make them spin. The sculpting on these guns is great, but the fronts are cast in the same grey rhino skin plastic, which is rather a bummer. Some silver would have made them look amazing. I’m guessing Hasbro ran out of budget for additional paint operations, which is understandable considering how amazing a figure this is. 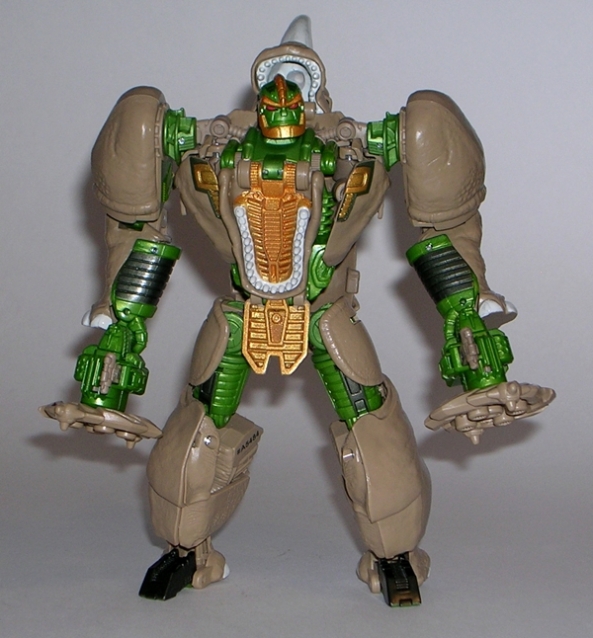 After some dubious modern efforts at Classics-style Dinobot and Cheetor, I’m happy to say that Hasbro’s third time was the charm. This figure does for Rhinox exactly what many of the best Classics/Generations figures have done for G1 characters. The rhino mode may not be the most exciting thing around, but it looks good and it gets the job done. Rhinox’s bot mode on the other hand is as sexy as a giant robot-rhino can possibly be. The sculpt, the proportions, the coloring (mostly)… everything about this figure just gels beautifully for me. He was a wonderful surprise for the Generations line and a great first addition to my Transformer collection for 2014. The fact that I got him at half price with free shipping on Hasbrotoyshop was just the icing on the energon cake. Now I really need to find me a Waspinator.