Yesterday we looked at the last Club Infinite Earths release, which happened to be a Batman figure. Well I really wanted to wrap up some unfinished business this weekend, and so at the risk of being repetitive today we’re going to look at the last two figures I have yet to feature in Mattel’s 1966 Batman series. With all the single carded figures already under my belt, this boxed two-pack is all that’s left of this rather brief run. Mattel were real bastards about making Robin an exclusive to this set. Any of us that were buying a complete assortment of the first wave wound up with two of the same Batman figures. I wasn’t going to bite, but when this set turned up on Amazon over the holidays for $13 shipped, I couldn’t resist completing my Dynamic Duo.

This two-pack comes in a sizeable box with the vintage Batman logo and a large window that lets the figures and base do most of the talking. The Caped Crusaders are carefully posed on the wall base against an animated background and they look great. I’m glad I took a picture, because it proved to be the last time I was able to achieve that look with the figures on the base. But I’ll come back to that in a little bit.

Mattel’s presentation for this line has been spot on from the get go, but I think the deco on this box drives it home even better than the carded figures. There’s no stupid and nonsensical overreaching quote from Robin and no extrapolated artwork of the villains, at least not any that’s prominently displayed. The artwork of Batman and Robin shaking hands on the back of the box looks like it was taken directly from the TV credits and really yanks at my nostalgia pole. The side panels feature the credit artwork of the Caped Crusaders running and it just looks awesome. Just about every iconic and animated trope from the series is on display here. Let’s get the figures out and take a look. 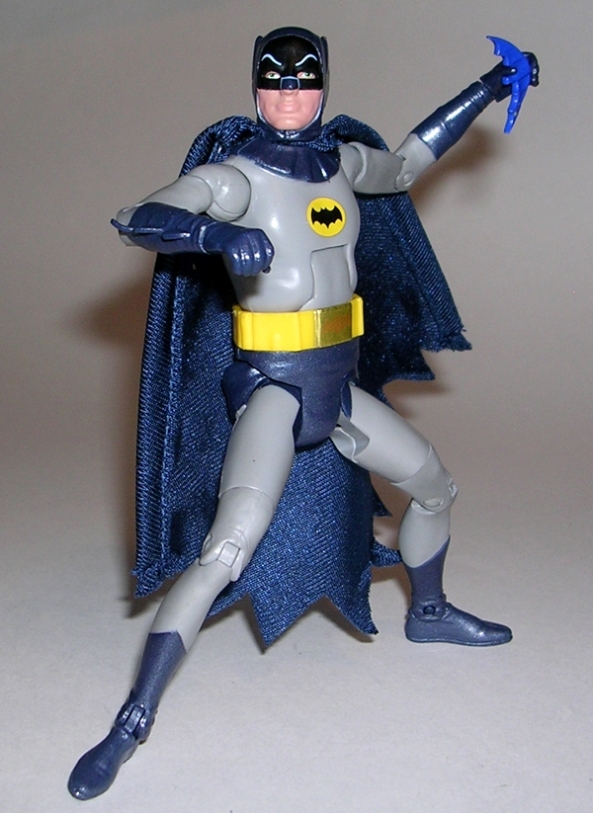 Batman should look familiar because it is practically the same as the carded figure I featured a few months back. The biggest difference here is the cape, which features wires running through the edges to help it fan out. I presume this was done to make the capes fall more realistically when the figures are “climbing” up the wall base. It also features a HUGE f’cking obnoxious mattress tag inside the cape, which I had to cut off. Why the hell did that have to be on this figure and not the carded one? I’m sure the real answer is ridiculous, but if anyone knows the I’d seriously be curious to hear why. The cape here isn’t really better or worse, just different. I’ll probably wind up displaying the carded one just because this cape seems to float a little higher around the neck. Otherwise, this is still a decent figure and he does come with a bonus batarang, which was excluded from the carded release.

Moving on to the real reason I bought this set… Robin. I’ve read some mixed reactions to this figure but in hand I have to say I think he turned out quite good. The head sculpt is a little soft but still a good likeness to Burt Ward. I’m not sure about the height, maybe he’s a little too tall, but he is shorter than Batman and that works fine for me. The build of the figure’s buck is good and the detail on the costume relies as much on original sculpting as it does on paint. Robin features the same style cape as Batman with the wires in the sides and the huge tag. I imagine the wires could be removed fairly easily if you wanted him to match the carded Batman a little better, but I’m content with leaving mine the way it is.

Since this is the first time we’re seeing Robin, I’ll run down his articulation, although it’s basically the same as Batman. The arms are ball jointed at the shoulders, hinged at the elbows, and have swivels in the biceps and wrists. The legs have the usual DCUC style hips, Swivels in the thighs and hinges in the knees and ankles. Robin has a swivel at the waist, an ab crunch hinge in the torso and his neck is ball jointed. I’ll also throw it out there that while his legs are pretty thin, he can stand a lot better than my last DCUC Robin, so that’s a bit of a treat.

The rest of this set is represented by a base that looks like part of the side of a building with opening windows and foot pegs for the figures. The idea here is that you can recreate the iconic scene of the Dynamic Duo climbing up the side of the buildings. During these sequences various famous actors would make cameos by popping their heads out of the windows and hilarity would ensue. It’s a great idea that sadly doesn’t work at all. Despite having a socket to help you hang the base on the wall and a small hole to attach the included rope, I find it impossible to get the figures pegged in so that they will stay in place on the vertical base, let alone do so while appearing to be climbing. If you can’t tell the photo above was obviously flipped vertically. I suppose if you were willing to glue the figures into place you could get a satisfactory result, but even then the base isn’t really big enough to make the illusion work for me. The failed execution of this makes me all the angrier that Mattel didn’t just release Robin as a single carded figure. 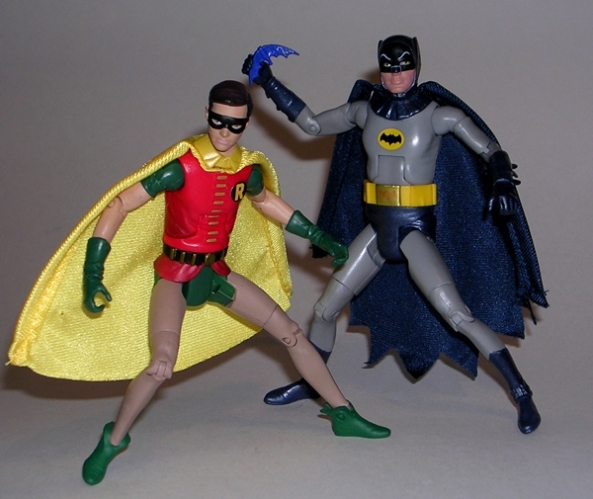 This Batman and Robin 2-pack retailed at about $25-30, which isn’t all that bad for what you were getting. I was boycotting it on principal that we shouldn’t have to buy another Batman to get Robin. But as I mentioned in the opening, when the price dropped to $13 on Amazon I ended the boycott. I guess my principals are worth exactly $17. In all seriousness though, the sale price was about what Robin would have cost as a single carded figure and so I felt justified. Besides, it wasn’t until I got the Dynamic Duo together on my shelf that I realized the folly of not completing my collection with Robin. Thankfully I was never all that interested in the display base, because it just doesn’t work.