Holy shit, it’s 2014 and for the first time since the whole Matty Collector madness started I am an official Club Eternia subscriber: Smart move or pure idiocy? Folks, only time will tell. But right now I’m feeling pretty good about it because my Two Bad has arrived and I was able to let Sale Day pass me by without having to worry whether I would be in the middle of a management meeting at work when the gates opened. Of course Sale Day wouldn’t have mattered in Two Bad’s case because he was a Sub Only figure with no stock available for Day of Sale. It was kind of a dick move on Matty’s part, but at this point who isn’t used to it?

I don’t usually bother with the mailer boxes, but I took a shot of this one because Matty has moved away from the familiar white mailers in favor of these new (and I assume cheaper) brown boxes. To date, I’ve only saved two mailer boxes and those were for the two vehicles, which I keep boxed. As a result I really don’t care about this decision, but I can imagine it might irk some MIB collectors.

The actual package inside is what we’ve been seeing all along. The only thing I have to say about it is that it corrected my consistent urge to put a hyphen in Two Bad’s name when there isn’t supposed to be one. Sorry, Two Bad… My Bad! HA! I’ll also point out that I found his bio to be of particular interest. I’ve always been familiar with the vintage figure, but I never knew anything about the character. I love the fact that Two Bad was originally two people magically fused together by Skeletor because they failed to take out He-Man. Jeez, talk about a disproportionate response. If Skeletor did this every time his minions failed, he’d just have one giant ball of arms and legs and heads following him around. I also dig that their names, Tuvar and Badra fuse together to make Two Bad. Sort of. It’s like that episode of Star Trek Voyager where Tuvok and Neelix fused to become Tuvix. LOL… Voyager was shit. I’ve been drinking. Where was I? Oh yeah… Let’s rip open Two Bad and check him out.

My first impression is that I expected Two Bad would be bigger. That’s not a complaint against the figure, just a misconception on my part. He’s actually not much bulkier than your average MOTUC figure and that’s fine by me. With that revelation out of the way, I’ve got to say the next thing that impresses me the most are the colors. I absolutely love the colors on this figure! These particular shades of blue and purple look amazing and when you toss in the silver paint on Tuvar’s gauntlet and boot, the bright red belt and the orange chest armor, it all makes for a very pleasing deco. Indeed, Two Bad’s coloring really gives Mantenna a run for his money and that’s high praise. He’s gorgeous!

Not to be outdone by the coloring, the sculpt is right up there as well. The contrast between Tuvar’s smooth skin and Badra’s meticulously sculpted scales drives home the combined nature of the figure. I also really dig all the attention paid to the sculpt of Badra’s boot and gauntlet. They don’t stand out much because the dark brown blends in with the dark purple, but there’s some crazy attention to detail there. The boot has all kinds of medieval looking spikes and buckles and the glove has a reinforced band on the knuckles to deliver extra pain in his punches.

And then there are the portraits! Usually when we talk about multiple portraits on a figure we’re talking about swappable heads, but in this case it’s two at the same time. How cool is that, eh? The head sculpts are each pretty well done, although I’m leaning toward Tuvar’s as my favorite mainly because of the paint. I’m not entirely sold on the orange eyebrow ridge on Badra and it also looks like there might be a bit of mold flashing on his noggin. I’ll also point out that there isn’t a lot of clearance between the heads, thanks to Badra’s ear spike thingies. If Tuvar is looking straight ahead then Badra can turn just fine, but if Tuvar’s head is off to the side there’s some rubbing. No big deal, and I’d prefer it this way than have their heads set tilting away from each other like on the vintage figure.

Unless you count the extra ball jointed neck, Two Bad has mostly the same articulation as any other MOTUC male buck. That includes ball joints in the shoulders and hips, hinges in the elbows, knees and ankles, swivels in the biceps and wrists, a swivel in the waist, and an ab crunch hinge in the torso. Oh yeah, he also has swivels at the top of each boot. 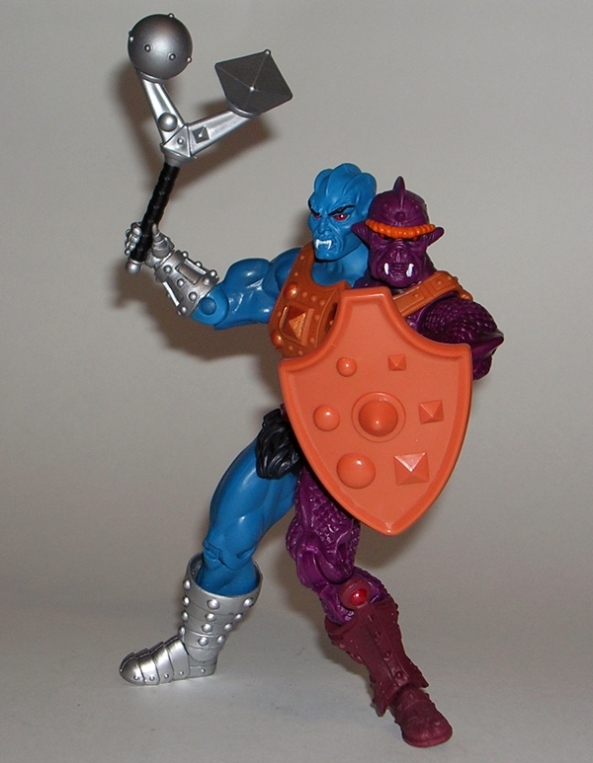 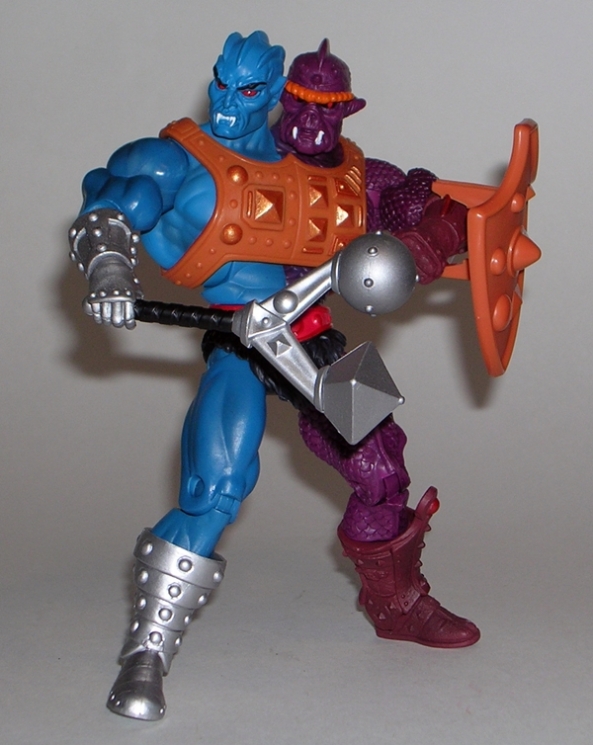 Two Bad comes with two accessories. First, you get an orange shield with a really strange clip that’s made to work with the fins on Badra’s gauntlet. I like the shield, but it seems like it could have used some more paint apps. Plus, if you like to mix and match weapons you’re out of luck here because this thing is only going to work with Two Bad. Secondly, you get the two headed mace, which is a really goofy and unwieldy looking weapon. I get it, it’s got two heads just like Two Bad, I still think it’s kind strange. 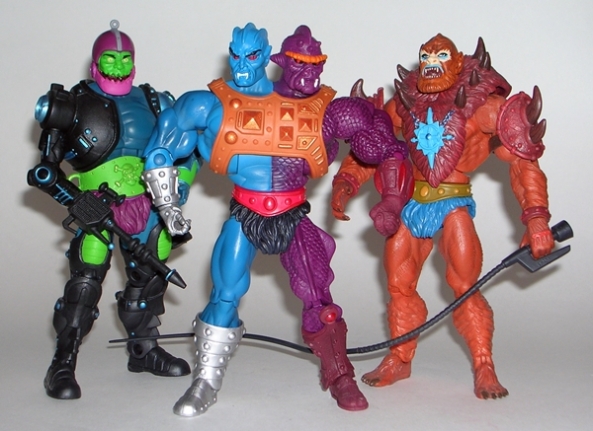 Two-Bad is an amazing figure and I love him enough to say he comes close to beating out Mantenna as my favorite recent figure in this line. He’s colorful, quirky, and beautifully sculpted. It’s a shame Matty had to go and make him a Sub only figure because I realize there are tons of collectors without the means or willingness to do a whole sub. That having been said, you can still find him for sale through secondary online sellers and while he’s expensive, he’s still a ton cheaper than buying a Sub just for the one figure. Either way, he’s a great way to kick off 2014 and it’s figures like Two Bad along with the great releases from last year’s Filmation Club that convinced me to go in for a Sub this year. Hopefully I won’t be regretting it by the end of the year.

4 comments on “Masters of the Universe Classics: Two Bad by Mattel”