If you’ve been reading FFZ for a while, you probably recall me making the odd remark about my borderline OCD. It’s not like I can’t go outside without checking the lock on the door a thousand times and I don’t wash my hands until I see bone. It’s just that little inconsistencies often nag at me. I’d like to think there’s probably a little OCD in any collector, so I don’t worry about it too much. What the hell does any of this have to do with Aquaman? Nothing really. It’s just that when it comes to collecting action figures, I hate not being able to complete a team, and Aquaman was the last “New 52” Justice League figure that Mattel gave us before bailing on the DCUC style in favor of that Total Heroes garbage. At least we got five members of the Justice League, but the fact that we’ll never have a proper Green Lantern or Cyborg in DCUC “New 52” style makes me really wish I had just gone with DC Collectibles’ figures in the first place. What was I here to talk about again? Oh yeah, Aquaman. Let’s check him out…

We’re going to be seeing the DC Unlimited packaging more than a few times over the next month or so. Around Christmastime Amazon had a fire sale on these figures for around $5 each and I took the opportunity to not only finally pick up Aquaman but also get some of those Injustice figures that I was holding out on. We’ve seen this before and I still dig it quite a bit. It’s not too far removed from the old DCUC packages, but it has a fresh new design and a really nice panel of character art on the front that the DCUC packages lacked. The back panel is more similar to the old style, complete with bio and some stats, as well as more of that great character artwork. 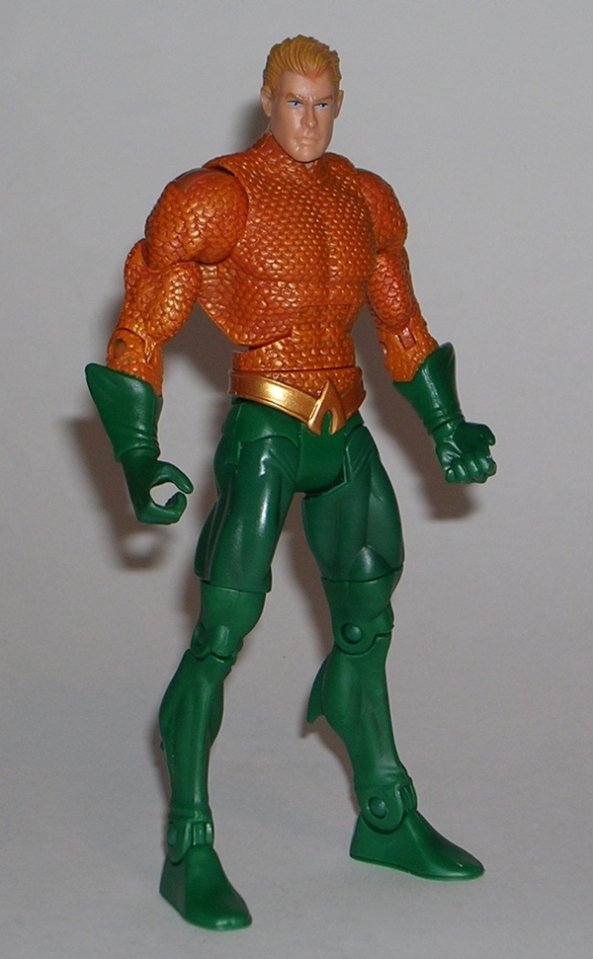 In terms of costume design, Aquaman’s really hasn’t changed much in the jump to the “New 52.” I guess when you hang out underwater with tuna all the time, you don’t always get the new fashion memos.  For those of you who aren’t a fan of the new costumes’ panel lines Aquaman has escaped that treatment. As a result, a lot of this figure is borrowed and/or resculpted from the old DCUC Aquaman, particularly from the waist down where only his fins have been resculpted. The shirt is the same great scale texture that we’ve seen on previous DCUC releases and the sculpted belt is raised from the rest of the figure in keeping with DC’s 3D design guidelines for these characters. 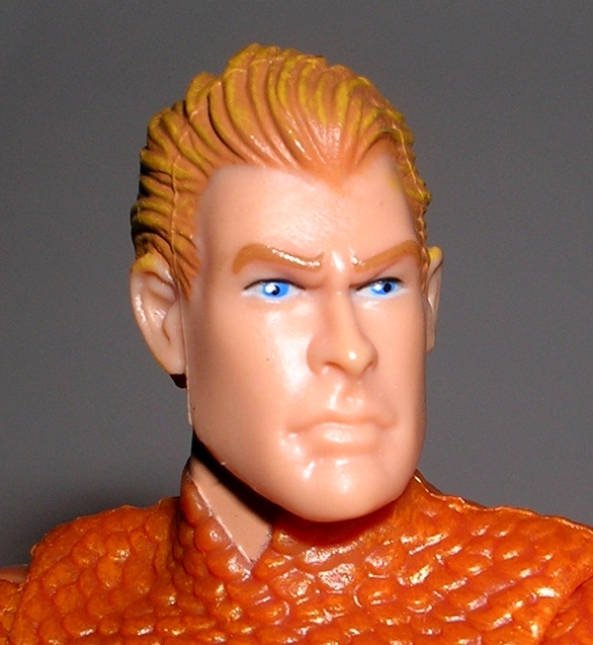 The portrait on the figure is quite good, with clearly defined features, neat paintwork, and a slightly determined expression. I’d rank this head sculpt closer to the better stuff we were getting out of the DC Signature line. The more youthful nature of the new Justice League is certainly conveyed here as well. Nice job, Mattel!

Aquaman features all the articulation we’ve come to expect from the DCUC format. The arms feature ball joints at the shoulders, hinged elbows, and swivels in the biceps and wrists. The legs have the usual DCUC style hip joints, hinges in the knees and ankles, and swivels in the thighs. The neck is ball jointed, he can swivel at the waist, and he has the usual ab crunch hinge in the torso.

Naturally, you get Aquaman’s ubiquitous trident. It’s cast in a matte bronze color, and I really dig the more utilitarian barbed head on this piece. It looks a lot more useful than the overly ostentatious trident from the old DCUC figure. The figure’s hands are sculpted so he can hold it in either or both.

There’s no doubt that Aquaman is a great addition to the DC Unlimited line, even if the DCUC “New 52” Justice League will never be truly complete without Green Lantern and Cyborg. I’ll concede that this probably isn’t the most exciting figure around because, well, he’s Aquaman and he doesn’t look that much different in the “New 52” Universe. On the other hand, I’ve really enjoyed Aquaman’s current book as well as his contribution in The Justice League. He sure played a pretty big part in the third volume TPB so it’s nice to finally have his figure on my shelf.