Transformers Thursday is once again upon us and as promised last week I’m going to keep this crazy nautical-themed Decepticon thang going on for one more entry with Thunderblast. This time we have a double rarity because not only are we checking out another seafaring Transformer, but it just happens to be one of those female types. What-What??? Let’s start with her alt mode. 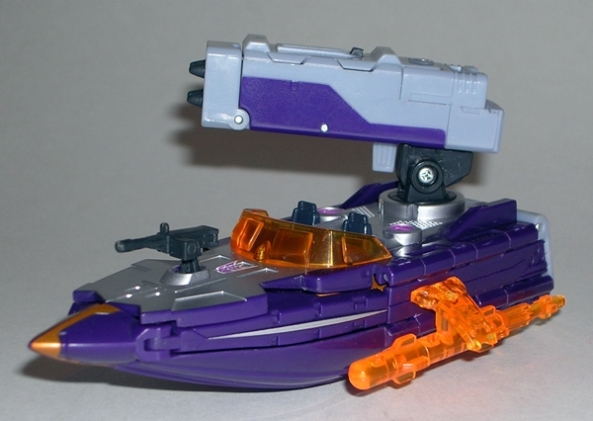 What we have here is a sleek and sexy speed boat that happens to be armed to the teeth. It’s also one of my all-time favorite Deluxe alt modes from the Unicron Trilogy days. Besides just being so unusual, it’s also wonderfully detailed right down to the little seats in the open cockpit and the translucent orange windshield. There’s a tiny deck gun on the bow that swivels and two outriggers with detachable torpedoes. Dominating the entire payload is the huge 4-pack missile launcher on the back that can swivel 360-degrees as well as raise and lower. If you think it’s a bit much you can also take it off to give Thunderblast a sleeker look. This would be an incredibly fun little toy even if it didn’t transform.

The deco here is Decepticon perfection. You get a lot of blue with a beautiful coat of metallic silver paint and some purple accents. And since Thunderblast comes from the days when Hasbro could throw paint apps at a figure on a whim, you get a little gold on the very front of the ship and a couple of red accents to round out a great look. The Decepticon insignia on the bow is a thing of beauty. 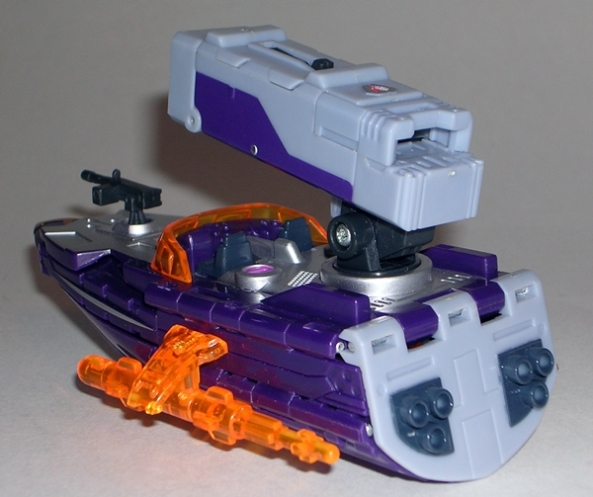 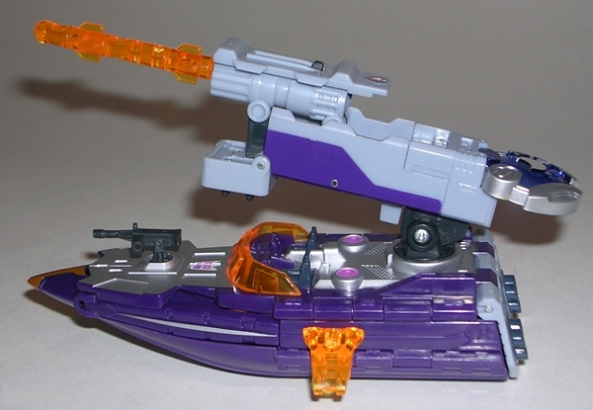 As a Cybertron figure, Thunderblast comes with a Cyberkey that unlocks a gimmick in the 4-pack missile launcher. Put the key in the back and it opens up the faux launcher to reveal a real one. You can load the torpedoes into it and fire away. As far as Cyberkey gimmicks go, this one isn’t one of my favorites. I don’t like the fact that you have to load the launcher after the reveal. Plus, those missiles look great as torpedoes, what’s the point of taking them off and shooting them through the launcher. The Cyberkey stuff has always been hit or miss for me and this one is largely a miss.

As great as Thunderblast’s alt mode is, transforming her is pretty laughable. You just open up the bottom of the boat in two halves and there she is. Unfold her arms and legs, and hinge the boat backpack down to help her stand and you’ve got your robot mode. The robot itself looks really good, but that doesn’t impress me when she’s wearing a giant splayed out boat on her back. I suppose you could argue that it looks like wings and an analogy to G1 Scourge could be made, but the boat kibble is just too unwieldy to make this figure work for me. It’s a shame too because she has amazingly good articulation. There are ball joints in her shoulders and hips, double-hinges in her elbows, hinges in her knees and ankles, plus swivel cuts in her biceps and thighs. Her head is ball jointed and she even has a swivel in her waist. That’s a lot of great articulation that you can’t do a whole hell of a lot with because of that backpack.

Still, as far as female Transformers go the sculpt here certainly works. Thunderblast looks a lot more feminine than the other female Cybertron figure, Override. She’s got some beefy child-bearing hips, high-heeled boots, and she’s definitely packing a chest. Oddly enough, the chest looks suspiciously like the Autobot Matrix of Leadership to me. Weird! The face is very reminiscent of the CG model of Beast Wars Blackarachnia and there is some spectacular light piping in the eyes. Also, I really love the silver paint they used here.

In robot mode, Thunderblast can make use of her huge missile launcher as a giant gun. It pegs into either of her forearms, but it’s designed to look like she’s holding it by the handle, which is pretty cool. You can get some decent looking poses with her wielding it, but between the giant gun and the huge backpack it looks like this poor girl is going to crumble from the weight of poor design.

In the end, Thunderblast is definitely a worthwhile figure to own just because of how unusual she is. A female Decepticon boat? You just don’t see that very often. Her alt mode is fantastic, but she’s ultimately a super simplified shell-former with engineering that just doesn’t impress. Sure, I’ve seen plenty of worse Transformers, which is why I’m still happy to have her on my shelf, but I can’t help but think that if she was a Voyager Class maybe Hasbro could have worked a few more hinges into her and got that huge backpack of hers under control.

And since I mentioned Override and there aren’t a lot of female Transformers out there, next Thursday we’ll go ahead and check her out.