It’s Transformers Thursday, folks, and today you get two for the price of one! I’m in the process of paring down some of my Transformers collection. I can’t bear to part with many figures, even many of the ones that don’t excite me anymore, so some of these guys are going to be sealed into totes and put away into storage, possibly not to be seen again for quite a while. I decided that I might as well at least feature some of them here before I send them off to storage oblivion, so today we’re going to look at a pair of Decepticons from the Speed Planet… Ransack and Crumplezone. This is a pair that I have very mixed feelings about.

Since I didn’t watch much of the Cybertron cartoon I don’t know a lot about this pair, other than they liked to hang out together and that’s why I’m looking at both of them today. I’ve always pictured them as a kind of Lenny and George double-act, which may be far from the truth, but the idea still makes me chuckle. Or that could be the three Jamesons I’ve had tonight. Let’s start out with Ransack who was a Basic or Scout or whatever the hell they used to call the smaller size assortment back then. 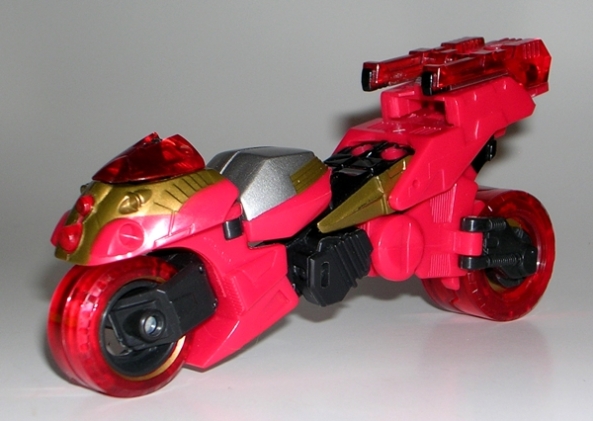 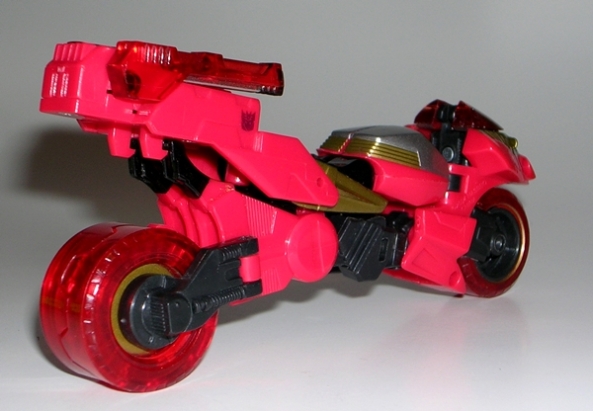 Ransack’s alt mode is a red futuristic motorcycle. Transformer motorcycles are pretty interesting to me because they require extra clever engineering to make them work and they almost always fail to look decent in robot mode. To date I still think the best motorcycle transformer of all time wasn’t a Transformer at all, it was the Go-Bot Renegade Leader Cy-Kill, but I digress. [Note to self: Pick up a Cy-Kill figure someday. He was really cool!] Ransack’s bike mode has just the right amount of Tron Lightcycle vibe to make me appreciate what Hasbro was going for here. This super-sonic crotch-rocket looks sleek and speedy and the mix of opaque red and translucent red plastic, along with the silver and gold paint does make for a striking deco. The wheels are chunky enough so that Ransack can stand upright without toppling over. That’s more than I can say about his robot mode, but I’ll get to that in a minute. 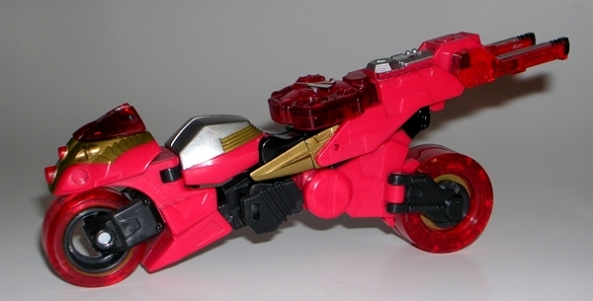 As with most Cybertron figures, Ransack comes with a Cyberkey that unlocks his gimmick. In this case if you plug it into the back just above the seat a pair of what I presume is either a set of guns or thrusters deploy out the back. Ransack is a Decepticon, so I prefer to believe they’re guns for shooting at anyone following him. But even my great imagination can’t save this gimmick from being pretty boring. Oh well, he is just a little guy so maybe I’m expecting too much. 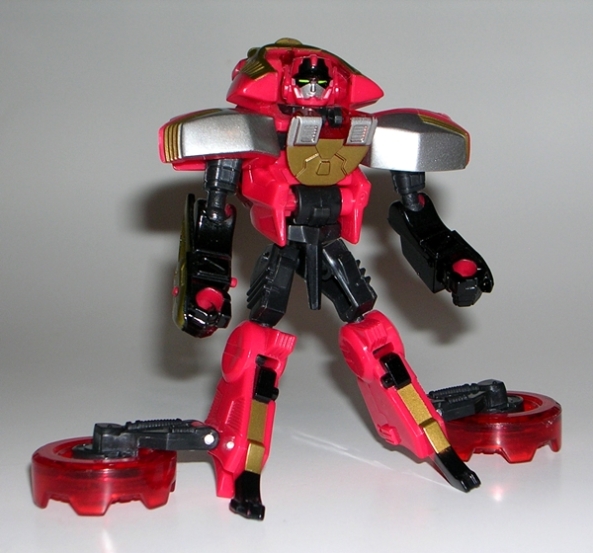 Unfortunately, Ransack only goes downhill from there. When I first got this figure way back when, it literally broke right out of the package. One of his heel spurs snapped off. It’s a piece that doesn’t affect the alt mode at all, but the lack of it makes it impossible for him to stand in his robot mode. As a result, I have to keep the two halves of his rear wheels folded down to stabilize him when they are supposed to be tucked alongside his legs. It’s not a total loss… I like to think of them as hover turbines. 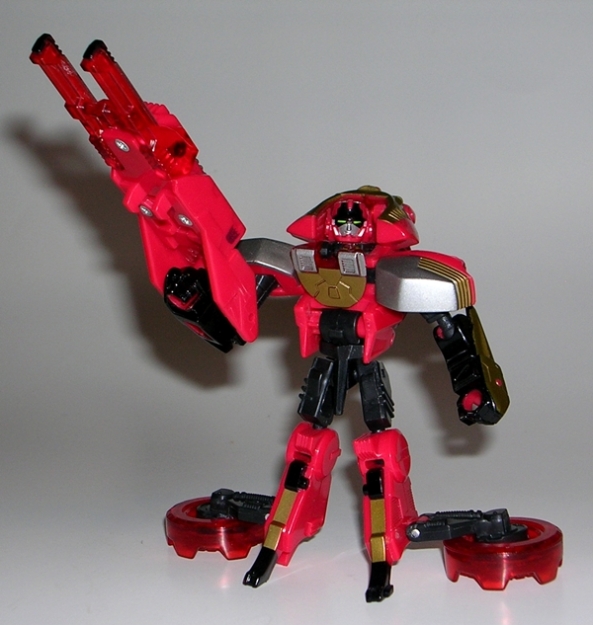 I know I should cut this guy some slack because he’s a pretty small figure and he’s a motorcycle, which isn’t a particularly easy mode to work with. On the other hand, a good piece of his motorcycle bulk detaches to become his gun so as clever as a few things about his transformation are, some of it still feels like a cheat. And it’s not like the end result is all that great to look at. A lot of Cybertron figures featured some really cool engineering, and given that context Ransack’s robot mode just feels primitive. Of course, the Cybertron line gave birth to another motorcycle Transformer that makes Ransack here look like a Masterpiece figure, but I’ll get to Lugnutz another day. For now, let’s just move on to Crumplezone. 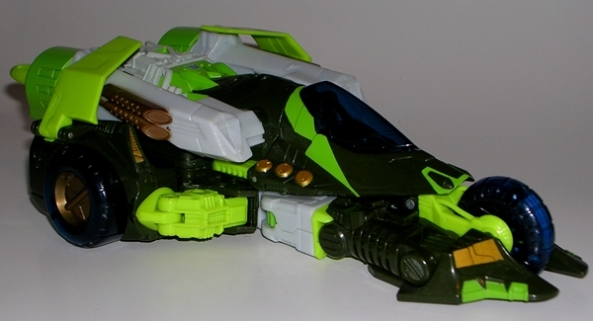 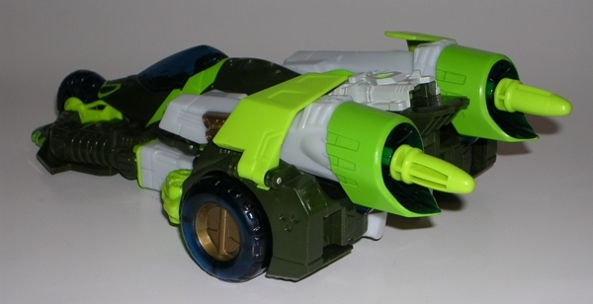 Now, this is a bitchin alt mode! While I could never get behind Cybertron’s whole idea of differently themed planets, I have no problem taking many of the Speed Planet figures and considering them to be native Cybertonian forms. Crumplezone fits that idea perfectly. He’s a big, mean looking three-wheeler with a jet-style cockpit and two huge engines hanging off his ass. This guy would look great tearing down the streets of Iacon City and blasting away at Autobot fools. The detailing on this vehicle is really nice, and if you aren’t a fan of the two-tone green deco, which admittedly doesn’t feel very Decepticon, you could always go for the Dark Crumplezone repaint, which I believe also featured some remolded parts and extra weapons too. 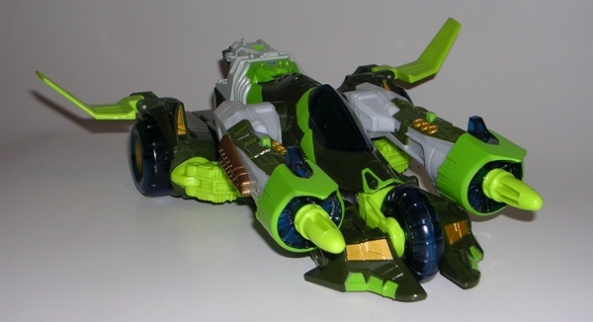 Crumplezone’s Cyberkey gimmick unleashes his two massive spring-loaded engines and flips them forward to mount on each side of his cockpit and serve as missile launchers. It also deploys his spoilers like wings. I was also surprised to find that the accompanying electronics on mine still worked and the toy unleashes a bitchin symphony of synthesized mayhem when his weapons are deployed. I think this is the first Cybertron figure I’ve played with in ages that still has working batteries in it! Either way, with weapons deployed, Crumplezone is one bad ass looking vehicle. 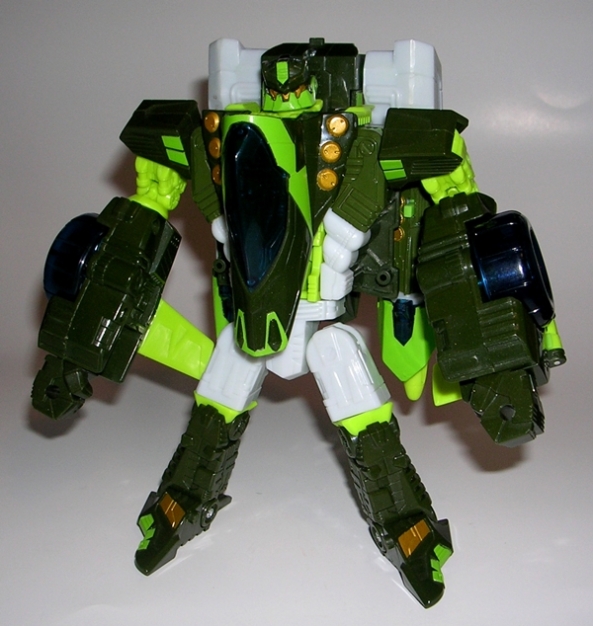 Crumplezone’s transformation isn’t terribly complex for his size and in robot mode he feels more like a jet Transformer what with his cockpit landing right on his chest. With his giant upper body and diminished legs, he has the same wonky but loveable proportions that would be later adopted by Bulkhead in both Transformers Animated and Transformers Prime. Yes, despite him being a Decepticon, I get a very strong Bulkhead vibe off this guy mixed with just a jot of Beast Machines Tankor. The only thing about this robot design that I don’t like is the fact that his wings just flop around on his forearms. 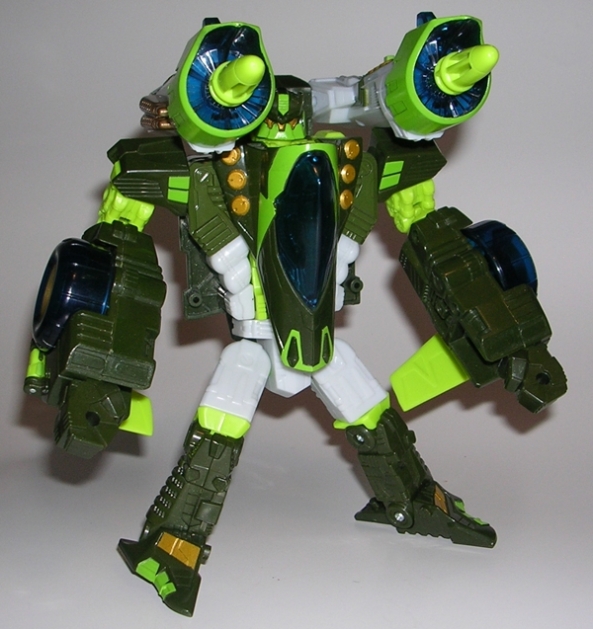 “But Crumplezone has no weapons,” you say? Fortunately, his Cyberkey gimmick works in robot mode too and you can deploy his missile launchers onto his shoulders, accompanied by the same glorious fanfare of electronic sounds. This configuration reminds me of the Armada Seekers with their shoulder cannon deployed. 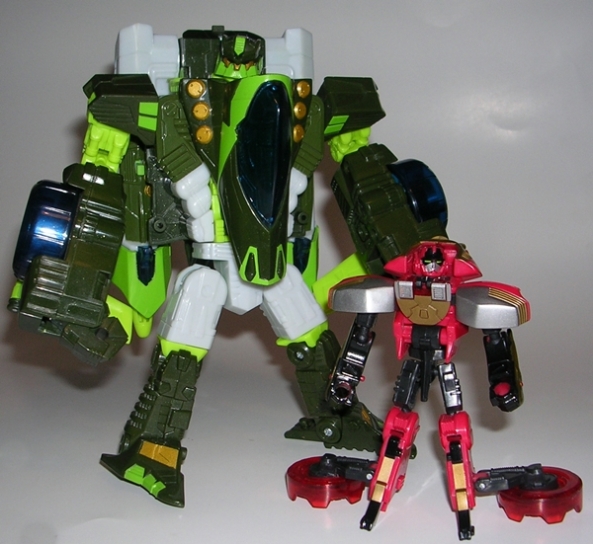 And that wraps up today’s Transformers Thursday. Honestly, I could take or leave Ransack even if mine wasn’t broken, but I’ve always considered Crumplezone to be a solid figure and I think he still holds up pretty well. Unfortunately, he takes up a lot of room and he doesn’t really fit with any of the other Transformers that I’m going to be putting out on display right now and so he’s going to get put away with his buddy Ransack. But the nice thing about putting toys into storage is you get to rediscover them again someday.

9 comments on “Transformers Cybertron: Ransack and Crumplezone by Hasbro”