I don’t tend to venture too deep into the Masters Fandom, it seems to be a pretty angry place these days, but I gather that today’s featured figure was none too popular among those ranks. A mystery figure said to be steeped in Masters Lore and dangled before the fans as a major incentive to get subscriptions in 2014, he is The Unnamed One. Gorpo, The Evil Lord of Chaos, the creator of The Snakemen and one of the major players in the struggle for power in Eternia and beyond is revealed to be… a Trollan Wizard. And a whole lot of Masters fans absolutely lost their shit in the aftermath.

Yup, there he is. The subscription only figure shipped along with March’s monthly figure. I don’t know what Matty was thinking when they planned this release, especially knowing what a fickle and unforgiving bunch the Masters collectors can be. They must have known that this was going to invoke fanwide butt-hurt on an atomic level. It almost seems as if they are actually trolling their own customer base. Or is that trollan? HA! Anyway, as many of you may know I’ve always been into Masters for the figures first and the fiction a very, very distant second, so if you’re looking for me to fly into a drunken rage over this figure, you’re going to be disappointed. Quite frankly, the idea of getting a figure of an evil Trollan Wizard is pretty damn cool in my book. Let’s bust this little guy out and see what we’ve got. 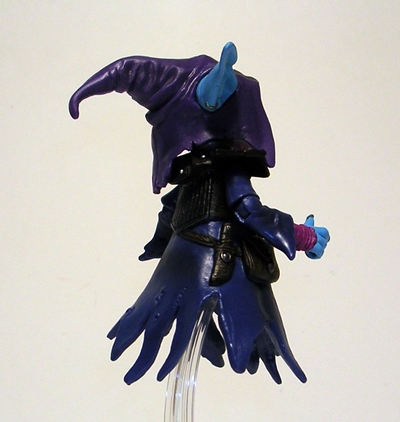 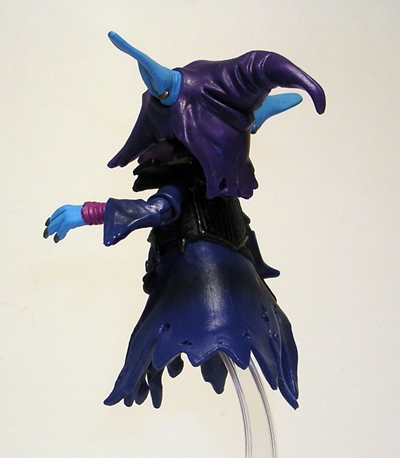 I really do love the character design here. Since most of my exposure to Trollans comes from the annoying and blundering Orko, it’s very cool to see a menacing and evil member of the race. The very idea of a spell slinging Trollan Warlord intrigues me. Gorpo comes clad in tattered dark blue robes with some nasty looking trappings sculpted in. The detail on his belt consists of pouches and a dagger, he’s got chest and shoulder armor and a sculpted red skull in the center of his chest. The stock portrait includes a purple hood with a drooping point, long blue ears, and two sinister yellow eyes that peer out above his purple mask. I used to doodle guys like this back in my AD&D obsessed days. In fact, Gorpo would look right at home on the cover of a TSR module, hovering around some lair full of dusty books and summoning an unholy beast from a stone well. I just dig everything about this guy!

You also get a swappable head with a helmeted portrait. The sculpting on this piece is a lot more intricate as the helmet is rather elaborately decorated with some scrollwork and spikes. There’s a mohawk-style crest on top and Gorpo’s long ears protrude from each side. If I had ears like that I think I’d want them protected a little better in combat! The helmet matches the armor on the body pretty well. It’s undoubtedly a very nice alternative portrait, but I think I’ll stick to the hooded one for my regular display. 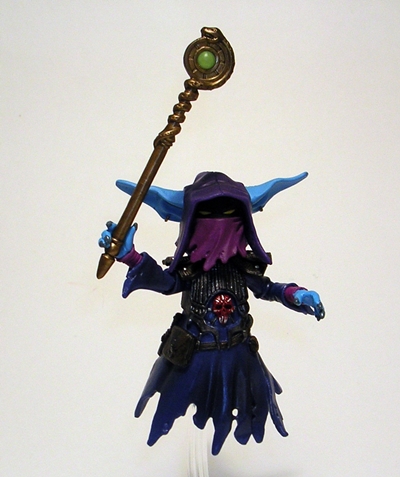 In addition to the extra head, The Unnamed One also comes with a few more goodies. You get the same style flight stand that came with Orko. It’s a little bigger and it just plugs into the socket under the robes and supports the figure quite well. You also get a magic wand and an effect piece. The wand is a far more formidable than the wimpy one that came with Orko and Gorpo can hold it comfortably in his right hand. The green orb in the center of the head catches light pretty well giving it a neat glowing effect. The effect part slips onto Gorpo’s other hand and looks like he’s shooting magic. As far as effect parts go, it’s not too bad, but these generally tend to wind up in my dreaded Tote of Forgotten Accessories.

You also get a couple of pieces of ephemera. A Mini-Comic is included in The Unnamed One’s package. I know fans go nuts over these, but I gave it a quick read through and it didn’t do anything for me. I think I would have been a lot more interested if it was rooted the more familiar and contemporary period. I wasn’t a big fan of the art either. 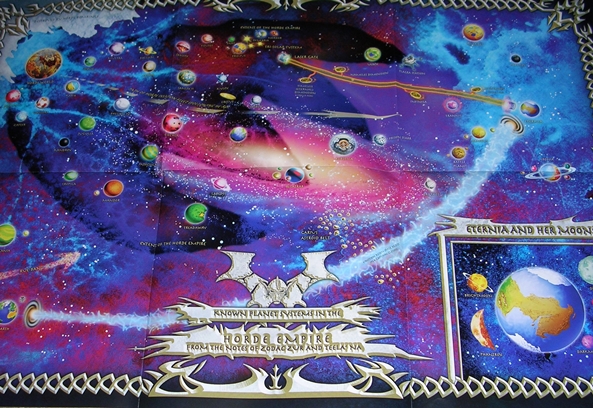 On the other hand, the Horde Map is a very cool bonus. It’s not actually packaged with Gorpo, but rather comes with him as part of the Sub incentive. Matty has been doing these maps as part of the subs all along, but since 2014 was the first time I subbed Club Eternia, this is my first map. I had actually forgotten all about it until I saw it in the box. It’s a big colorful piece of art that I wouldn’t mind hanging someday if can find the wall space.

To the hardcore Masters fans who are rankled by this release… I get it. I really do. You were expecting something unspeakably bad ass and even if there hadn’t been a long wind up of suspense, most of you still would have found Gorpo here disappointing.  Fans have also been grousing about the price, reminding us that Orko came with a whole Prince Adam figure crammed into the bottom of the package. I’d point out that The Unnamed One is considerably larger than Orko and the sculpt is vastly more intricate. I’ll concede that as a smaller figure he is definitely pushing the envelope when it comes to this line’s price point, but it’s not as bad as everyone is saying. Nonetheless, with expectations running wild, I doubt there’s anything I can say that’s going to swing the sour opinions on this figure. Nor am I out to do that. I think he’s a great release, and I’m glad to add him to my shelves.

5 comments on “Masters of the Universe Classics: The Unnamed One by Mattel”