Surely everyone has heard by now that the Marvel Universe 3 ¾” line is dead, but in reality it’s just being rebranded as the Marvel Infinite line. While the MU line and I have had our ups and downs, I’ve been a loyal collector from the early waves and even though it’s just a name change I’m still sorry to see it go. I haven’t looked at anything from this line since back in November of last year, but that doesn’t mean I haven’t been buying them. I actually have a sizeable stack of unopened MU figures that I’d like to get through before I start covering the Infinite figures. So, let me try to get back on track with that today with a look at Cloak and Dagger.

I was first introduced to this pair when I was about 15 when I bought the four-issue miniseries from 1983 in a used bookshop downtown. I don’t remember the exact circumstances, but considering my age at the time, I’m thinking I picked it up for three reasons: Dagger’s tight white unitard on the cover and boobs. I never thought this pair would ever make it to Marvel Universe but I’m certainly glad they did. The last time I owned these characters in figure form it was that unfortunate boxed set from Toybiz. Here they come single carded on the usual MU packaging. The excellent character art features both characters and the insert identifies them only as “Marvel’s Knights.” Uh-oh. You know what that means! Yes, Hasbro offered this duo as two variants in one slot and it’s a terrible f’cking idea. Who is going to want just Cloak or Dagger? Why do you do this shit to your customers, Hasbro? Fortunately, I was able to snag a pair online for only eleven bucks a figure. Let’s start with Cloak. 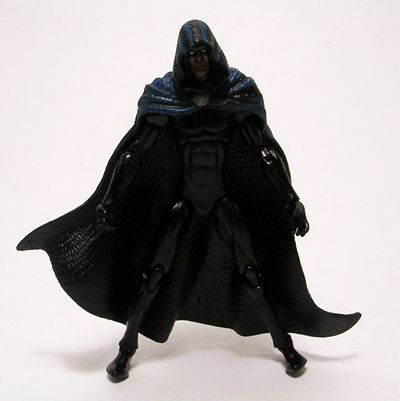 Cloak was a really easy figure to make. He features a totally black buck with a newly sculpted head and cape. The cape is what you would probably expect. It’s sculpted to billow out and it fits right over the neck post. There’s some decent texturing, a grey clasp at the neck, and the back has dark blue striping, which represents some of the only paintwork on the figure. The sculpt of the cape doesn’t interfere too much with articulation, although the fact that it falls just short of the ground make Cloak a bit back heavy. 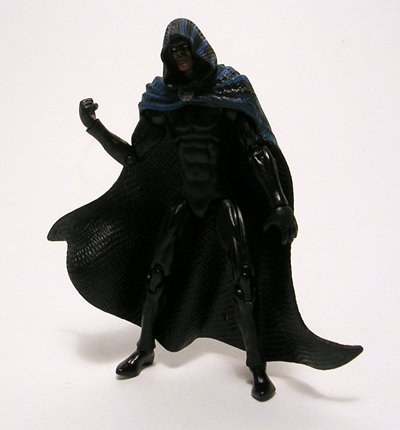 The head sculpt includes the hood all as one piece and it creates a nice illusion that it’s part of the cape. The head sculpt is excellent, with a suitably stern, almost blank expression. The face is painted brown and the eyes are white, which makes a nice effect of the eyes shining through from the hood.

The buck isn’t the most articulated of the modern 3 ¾” bodies, but it is close. You get ball joints in the neck, shoulders, hips, and ankles. There are single hinges in the elbows and doubles in the knees. You get swivels in the biceps and wrists, and a ball joint in the torso. The key thing missing here are the thigh swivels, which appear on what I consider to be the ultimate buck that Hasbro uses in this scale. It’s no biggie, although I do kind of miss the rockers in the ankles.

Moving on to Dagger, here we have another pretty easy figure for Hasbro to produce, as she makes use of the standard modern female buck with a new head popped on. The pearlescent white they used for her bodysuit looks fantastic and the dagger shaped cut out down her front is decently executed. My figure had some black spots on her white paint, which had me worried until I got the figure open and was able to scratch them off with my thumb nail. Not to take away from Dagger, but I can’t help but think with a little fresh paint and some tiny roller skates and Hasbro could easily turn this figure into a mighty nice Dazzler.

The head sculpt is good, but maybe a tad too intense. The paint is nice and clean and the hair looks fantastic, even if it does inhibit the neck articulation a bit. I think my biggest gripe here is the plastic used on the face is really waxy and can be a little distracting.

In terms of articulation, Dagger brings her A-game. You get ball joints in the shoulders, elbows, torso, hips, and ankles. Her elbows are hinged and her knees are double-hinged. You get swivels in the wrists, thighs and calves. The neck is both ball jointed and hinged, and you get rockers in the ankles. Nice! The hinges are a little soft on my figure, but that often comes with the territory on the skinny chicks. 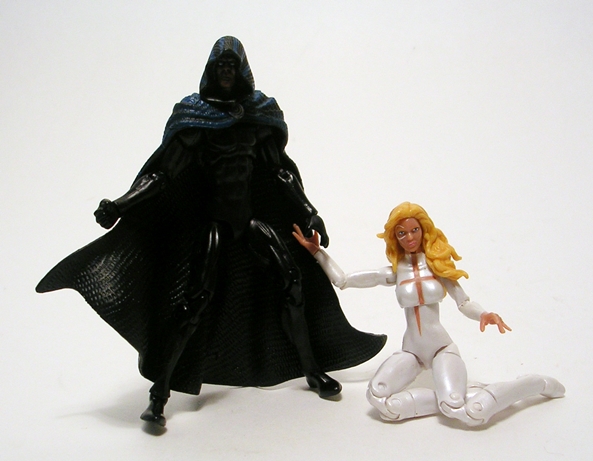 Yes, Cloak and Dagger were easy figures for Hasbro, but that doesn’t make me appreciate them any less. This pair is a very welcome addition to my menagerie of Marvel Universe figures and I’m very happy I was able to score both at a reasonable price. In fact, the only criticism I have is that the way they were released seems to have been designed to torture and agitate fans and collectors. Hasbro simply should not have gone the variant route and it only serves to remind me of the fact that I’m still missing one of the Legends Wrecking Crew for the very same reason. WHERE’S MY BULLDOZER, HASBRO??? I know Hasbro doesn’t do Universe two-packs, but they do those three-packs, so they could have tossed in a Spectacular Spider-Man and made this an easy boxed set.

2 comments on “Marvel Universe: Cloak and Dagger by Hasbro”