I’m making a concerted effort to open the last of my Marvel Universe figures so that I can move on to the new Infinite branded line. As a result, today I’m checking out Richard Rider, aka Nova! It’s been a long working weekend, my back is killing me, and I’m anxious to have some drinks and collapse onto the sofa, so let’s get right to it… 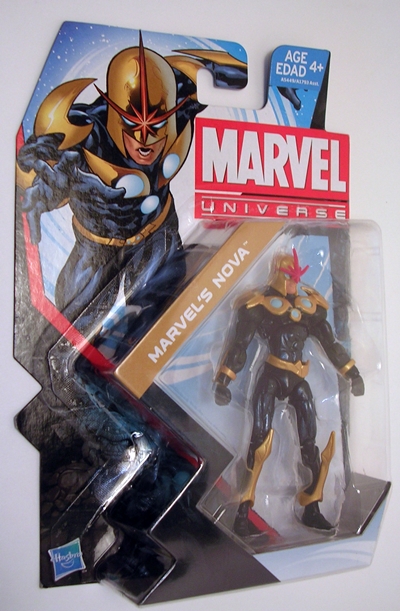 Ah, it’s nice to see the MU packaging again. It may be defunct now, but we’ll be seeing it a bunch more times as I still have a lot of figures in the line to cover. You get some nice character art and the figure looks great in the bubble, but there’s not a lot going on in there. Nope, no stand or accessories. I’ve been hunting Nova for a long time and I finally found him hanging on a peg in Target, which surprised the hell out of me. I was clearly so delighted that I had to explain it to my Marvel-challenged buddy who I was with by labeling him as the Green Lantern of the Marvel Universe. Despite the ignorance of my friend, I think Nova’s probably pretty popular right now because of his role in the Spider-Man cartoon. I’m guessing he’s going to be a popular figure in the coming days since the Nova Corps will be featured in the upcoming Guardians of the Galaxy film. Man, I can’t wait… August can’t come soon enough. 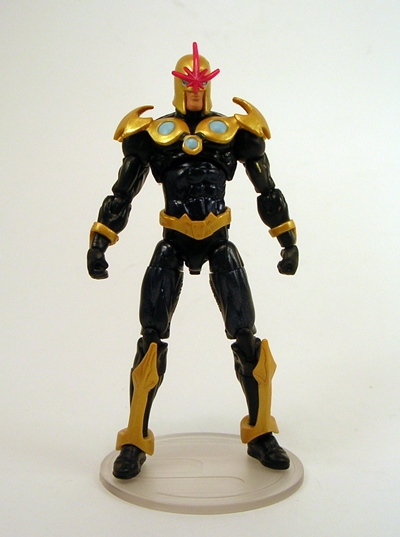 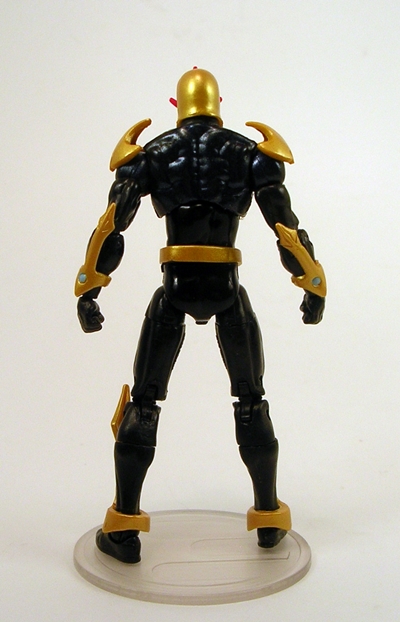 Nova makes clever use of a standard, modern MU buck with extra bits attached to make up his Corps uniform. The added gold parts go a long way to add depth and complexity to the outfit, but the pieces on his legs and arms do tend to flop around about. As a result, you need to adjust them almost every time you repose the figure. It’s annoying, but at least it makes sure that they don’t impede the articulation. Still, a strategically placed spot of glue on each might remedy the situation. The buck is uniform dark blue, and the added matte gold parts really make the figure pop on the shelf. 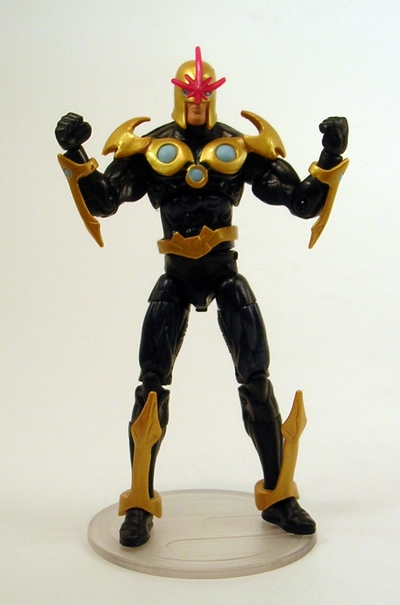 The portrait here is certainly very comic inspired. Hasbro really nailed the bucket-style helmet with the red starburst on the forehead. The exposed part of the face seems rather stylized, though. It might just be because of the shape of the helmet’s cut-out, but the jaw and the lips seem super pronounced. It still works for me just fine. 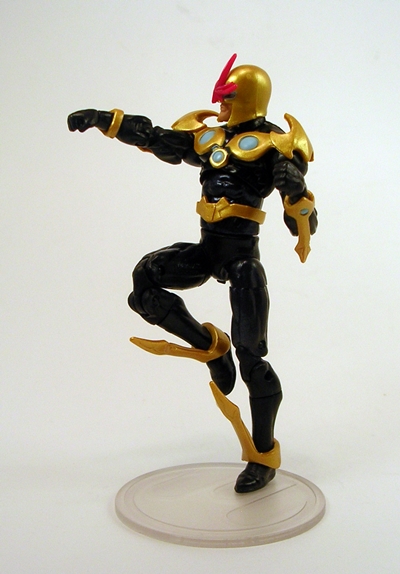 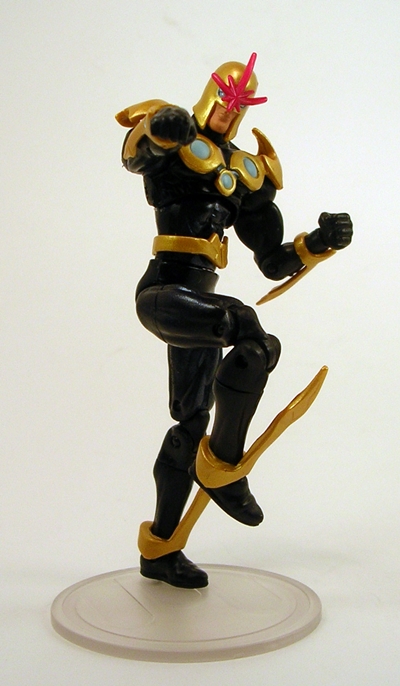 Because Nova is built on the most modern of MU bucks, he sports some crazy articulation. The arms feature ball jointed shoulders, double hinges in the elbows, and swivels in the biceps and wrists. The legs are ball jointed at the hips, double hinged at the knees, hinged at the ankles, and feature swivels in the thighs and again below the knees. The torso swivels at the waist and features a ball joint just under the chest and the neck is ball jointed for a generous amount of movement. As is often the tradeoff with these newer bucks, Nova can be a bit tough to stand without assistance and some of the hinges feel a little soft. 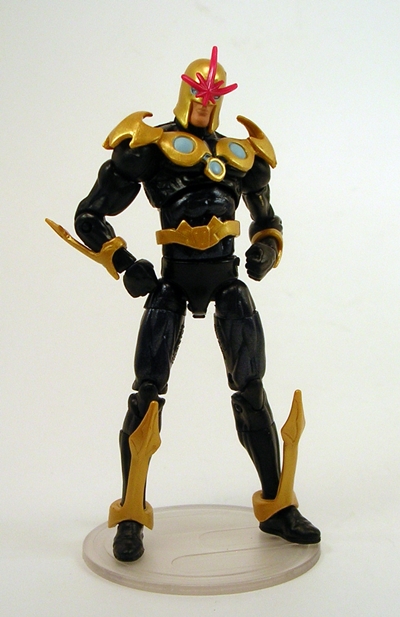 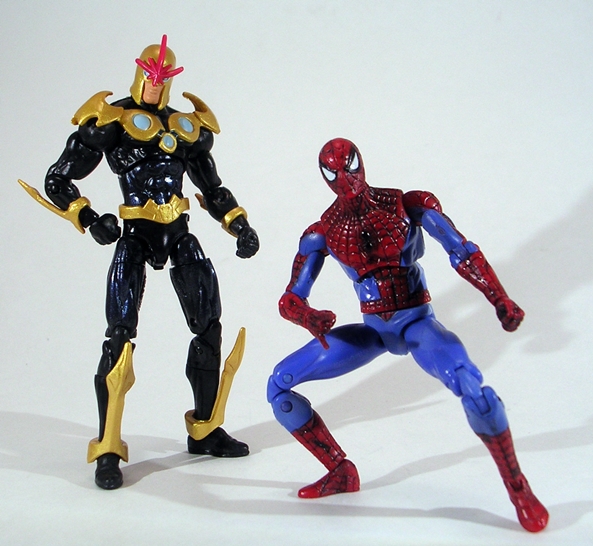 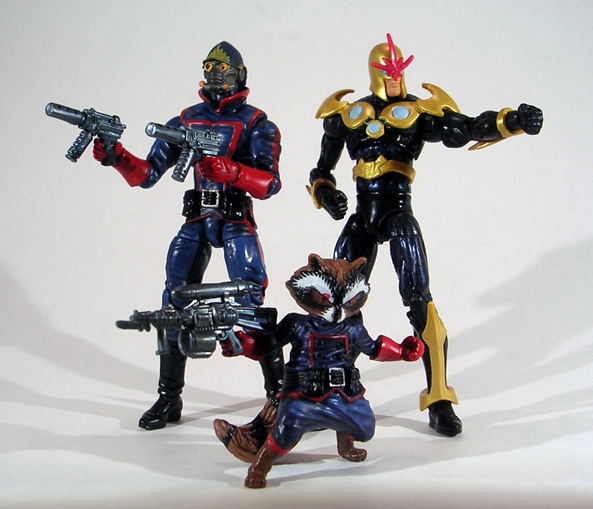 With no accessories, that’s pretty much all I have to say about Nova. He’s as solid a figure as they come and he’s definitely a welcome addition to my army of MU figures and a pretty timely release on Hasbro’s part. Considering that the pegs here are just full of Caps and Iron Mans, I was beside myself when I found him out in the wild. I didn’t even have to dig through the pegs for him as he was just hanging there in plain sight waiting for me to grab him. Yes, this is what figure hunting in my neck of the woods is like, folks. It’s brutal and most often non- productive. Anyway, Nova’s been sitting on one of my online wish lists for a while now at a couple bucks above retail and I’ve just been waiting to pull the trigger. Good thing I waited!