It’s Day #3 of Transformers Thursday held hostage where I am forced to write about Bayformers or else Michael Bay will have Bumblebee come round and piss oil on my face. I don’t need that… No sir! Today’s random dip into the Bayformer tote produced yet another figure from the first live action movie. I honestly had no idea I had so many figures from the first flick. I thought this was going to be mostly Revenge of the Fallen figures. Anyway, Longarm wasn’t really in the movie, he’s just based on the tow truck that Mikaela used to drag Bumblebee around after his legs got blown off. Let’s face it, there weren’t a lot of Transformers in the movie, so Hasbro had to make up some new ones to sell more toys. I’ve got no in-package shot, so let’s jump right to the alt mode…

As far as tow trucks go, Longarm’s alt mode isn’t bad, but maybe a little bland. It’s a rough approximation of the truck seen in the movie, with a similar white and blue deco, but I think the lettering on the sides is different. In this case, it says, “Orson’s Towing” and there are tiny Autobot emblems on the sides too. There are a lot of seams on him and if you don’t have him transformed just right the panels tend to separate or pop out. I think the coolest detail on this guy is the way Hasbro reproduced that crosshatch metal texture in the bed liner. You also get an articulated hitch so that Longarm can actually tow your disabled Autobots back from the frontlines. Gotta love that! 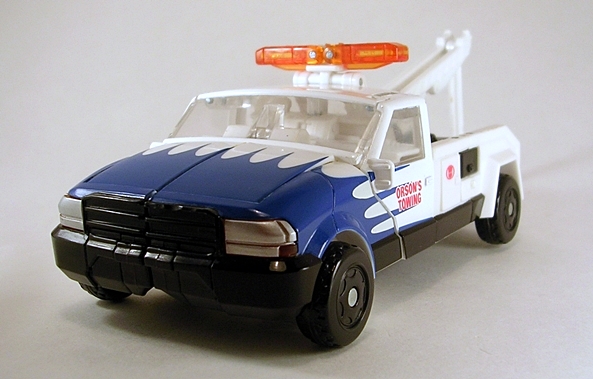 I’m usually fan of clear windshields, as opposed to having them painted on, but in this case Longarm’s windshield prominently displays the total lack of a cab interior. I know, it’s only a Deluxe figure and I’m probably expecting too much. I suppose if that’s the biggest thing I can nitpick, than this alt mode is pretty solid.

Moving on to the robot mode, Longarm has some really cool stuff going for him. For starters, that textured metal bed liner that I love so much from the alt mode makes up his chest and arms in his robot mode and it looks really sweet. The proportions on the figure are pretty wonky, what with the really short torso, stout legs and big feet, but I think it’s a good compromise between regular TFs and the Bayformer aesthetic. Because Longarm is an original robot design and not based off one in the film, he doesn’t suffer as much from the horrible malady of Bayformeritis. 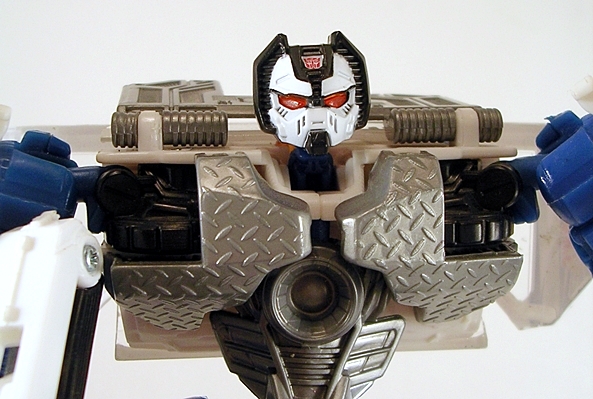 I really dig the head sculpt on this guy too. It’s not at all like the insectoid messes that pass for Bayformer heads. Instead, we get a cool helmet that integrates the mouth plate beautifully. There’s also an excellent orange light piping effect in the eyes. The tiny Autobot emblem on his forehead is a nice touch, although after thinking about it, it might give the Decepticons something to aim for. Maybe it’s a bad idea.

And then there’s that big ass gun. The idea of having a robot transform with a gun already in his hand sounds really cool. Hasbro did it later with a great deal of success when they designed Revenge of the Fallen Brawn. But when it’s a rifle this unwieldy and it’s permanently attached, the idea breaks down in execution. Don’t get me wrong, the way the rifle converts from the towing assembly is very clever, but it really messes with my ability to pose Longarm, mainly because the stock of the gun juts right up into his armpit. If the rifle weren’t screwed into his hand, and there’s no reason for it to be, this figure would have turned out so much better. I was really struggling to come up with more than a few poses for this guy. He can actually hold it away from him to the side as if taking a shot, but the ball joint in his shoulder isn’t strong enough to hold up all that weight. I should also note, that the rifle fires an orange missile, which I could not find to save my life.

So, in the end I’m a little torn on this guy. I dig the alt mode well enough and it helps that I have a thing for Autobot tow trucks. The robot mode looks just fine standing on the shelf at attention and holding his gun. Indeed, he makes for a fine and rugged looking Autobot warrior. But the moment I try to play about with him, I get frustrated really fast. Overall, I think there’s more good here than bad, and ultimately the figure just stumbles on a good idea gone wrong. I should also note that Longarm was repainted at some point as Hoist. I can’t remember what line that figure was released in, but one of these days I’m going to track it down.