The 5-inch line of Doctor Who figures isn’t exactly alive and kicking, but it is limping along and still sputtering out some offerings, most of which are repacks and minor tweaks of existing figures. In particular, Character Options re-released a number of figures from the Tennant Era in new packaging. A little while ago I featured this reissue of The Tenth Doctor in his blue suit and now we’re going to check out Mr. Fixed-Point-In-Time himself, Captain Jack Harkness.

I don’t have anything new to say about the packaging. We’ve seen this plenty of times before. I will, however, take this opportunity to point out how much I miss Jack’s appearances on the show. I could never get into Torchwood, but seeing Jack pop up on proper-Who was always a treat. I’ll be the first to admit that NuWho becomes way too parochial, and by that I mean that with all of space and time to explore, The Doctor keeps running into a lot of the same people, but I feel sad knowing that Jack never got to come back for at least one episode to meet Eleven. I think that would have been fun. Jack’s character can be a bit much sometimes, but I still think he was a great addition to the Whoniverse and John Barrowman seems like a really cool guy. But, getting back to the figure, the only Captain Jack I have in my collection was the original one from way back in 2006(?) and that one hasn’t aged all that well. That’s ironic if you think about it. Anyway, let’s check out this update.

This is definitely the more modern Captain Jack and I’m guessing he would pass for a Torchwood Jack as well. He has his long coat naval with those stylish epaulets, which is cast in soft rubber. CO even took the time to do a nice sculpt underneath, showing off his suspenders and his sculpted, non-functional (boo!) holster. All In all, Jack’s ensemble is well executed and followed up with some really tidy paintwork, right down to the individual buttons on his coat. 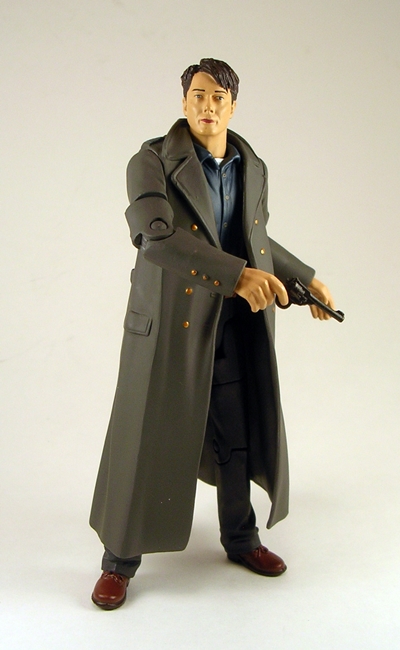 The portrait is decent enough, but I wouldn’t classify it as a homerun. It’s certainly better than the chunky noggin we got on the first Captain Jack figure. I definitely recognize the likeness, but the expression is rather blank. I guess that would actually be a lack of expression. His complexion also looks extra shiny. Still, I’m pretty happy with what we got. 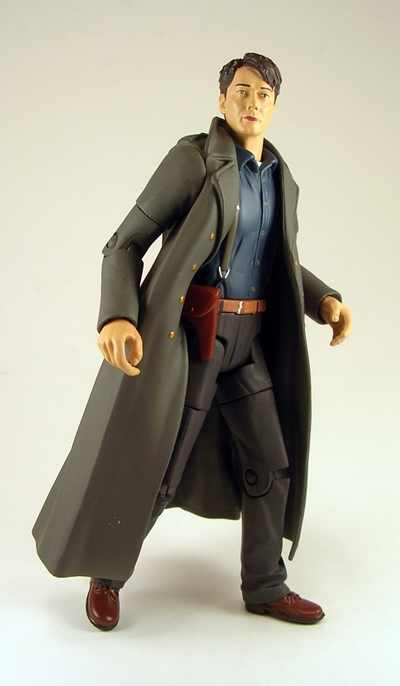 The articulation on this guy holds no surprises. It’s a repack so don’t expect any ball joints in the shoulders. The arms only rotate at the shoulders, but they do feature hinged elbows and swivels in the wrists. The legs have universal movement at the hips, hinges in the knees, swivels in the thighs, and due to the sculpt of the pants cuffs, there isn’t any articulation in the ankles. He can swivel at the waist and his head rotates. Like I said… no surprises.

This Jack figure originally came with his trusty revolver and The Doctor’s hand in a jar. This time around you only get the trusty revolver. Cheap! J’accuse, Character Options! First no sonic screwdriver included with the Tenth Doctor repack and now no hand jar. That pisses me off! The pistol is a decent enough accessory and he can hold it pretty well in his right hand. You can even almost get his trigger finger through the trigger guard.

That’s pretty much all I have to say about Captain Jack here. He’s a decent enough figure and I’m glad to get the opportunity to pick him up since I missed out on him last time. Now I can put my original Jack figure on my Ninth Doctor shelf and put this version with my Tenth Doctor figures. I paid about $15 for this figure, which is admittedly steep, especially when CO starts cutting accessories out, but my budget isn’t exactly getting blown on Doctor Who figures these days, so I was willing to splurge.