While he may bask in relative obscurity, the character we’re looking at today wears a veritable aura of greatness about him. Well, he does as far as I’m concerned! Through the pages of Marvel comics, he has hob-nobbed with The Transformers and Doctor Who alike. He is a conduit for tying together two of my favorite franchises of all time and for that I can’t help but revere him. I also can’t help but sit here in slack jawed amazement as I stare at this figure on my desk. He is Death’s Head! Hasbro made a Death’s Head figure! Holy shit!!! I have no packaging to show you, because this fella came to me loose from the proprietor of the spectacularly awesome toy review site, Starscreamersrants. Go check it out. Seriously… go now. I’ll wait.

<Let’s see what’s in the paper today. Well, look at that. A big ass hole opened up in Siberia. That can’t be good. Can’t be long until demons start spilling out of that. I bet right now they’ve got Spetsnaz teams headed down there to dynamite that thing closed before the para-dimensional invasion begins… >

HUH? Oh, you’re back. Ok. So, Starscreamer was content enough to scoop me on the review before bartering the figure into my greedy hands and sparing me having to risk getting my throat cut by going down to 17th Street and buying the figure from my dealer. Anyway, the packaging is the same horridly boring and uninspired dreck that we saw last week for the Cyclops review and we’ll be seeing a lot more of it in the future so I need not dwell on it. 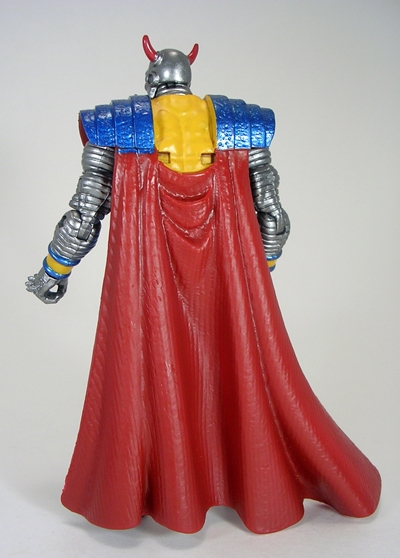 And there he is in all his glory. Hot damn, it’s Death’s Head! Even if I had no idea who this character is, I’d still fall in love with his wild and colorful design, which is beautifully portrayed in this figure. I mean, I just look at this guy and my imagination runs wild. 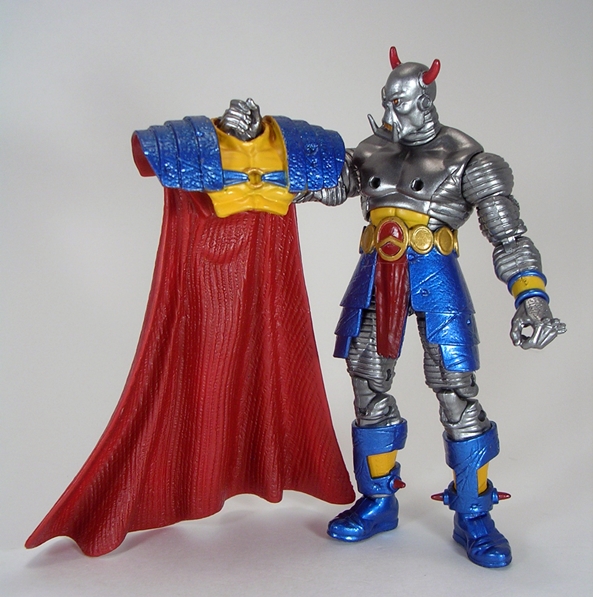 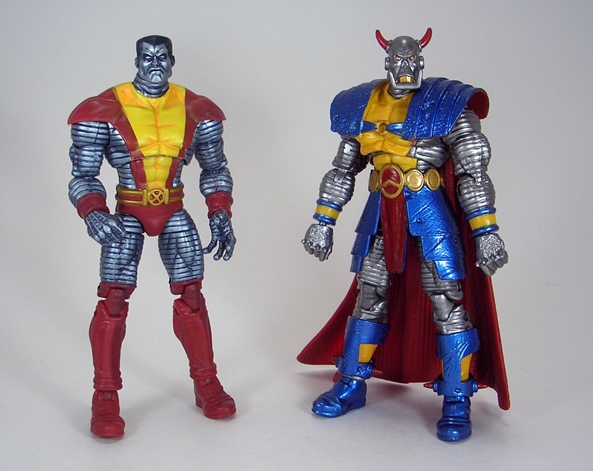 The body is built straight off of the Marvel Universe Colossus figure and I think that was a great choice. The only notable resculpting done to the buck is the addition of the new and bulkier boots and new hands. The silver paintwork on the arms and legs is also kept, albeit made a smidge more vibrant. The biggest changes come in the addition of the shoulder and cape piece, which is removable, and the new belt and skirt ensemble. Hasbro put some beautiful work into these new pieces. I love the pitted and pock-marked armor on the shoulders and the battle scrapes and scars on the boots and skirt pieces. Very nice! 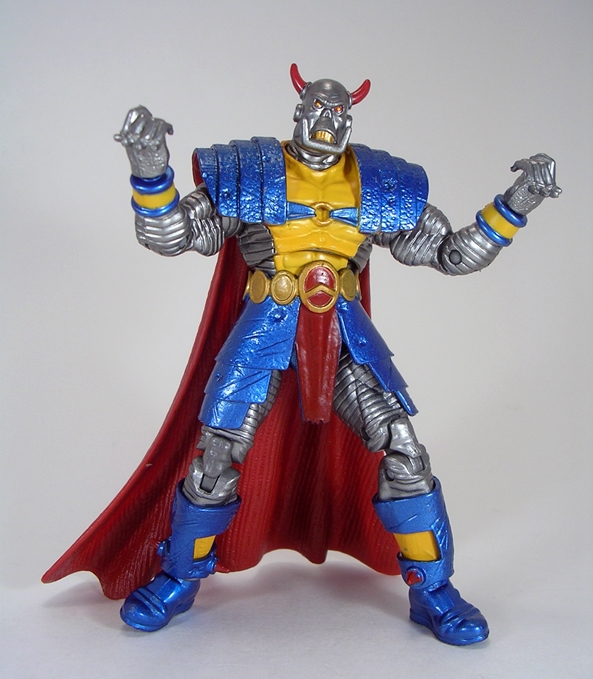 Of course Death’s Head sports a new sculpt for his… Death’s head! This guy’s portrait has more personality than anyone I can think of. He’s basically a metal skull, horned demon, with the jowls and under bite of a bulldog. It’s readily apparent that sweet, sweet love was poured into this head sculpt and it is most certainly appreciated. And as great as the overall sculpt is, this figure is also enhanced by some beautiful coloring. In addition to the aforementioned silver paint, you get some really beautiful metallic blue mixed up with the yellow, red and even some gold on his belt. This is what a comic book figure is supposed to look like. It’s like watching colors having sex. Seriously, I’m looking at him now and my eyeballs are aroused. 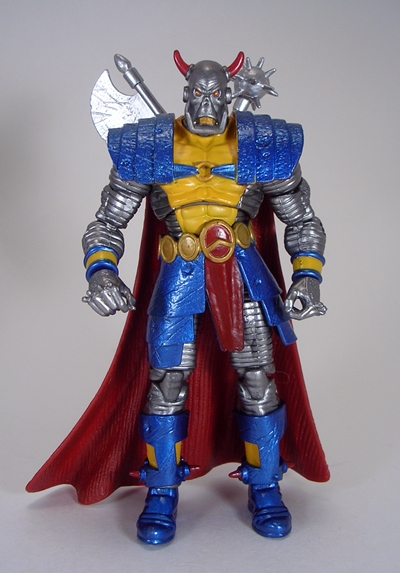 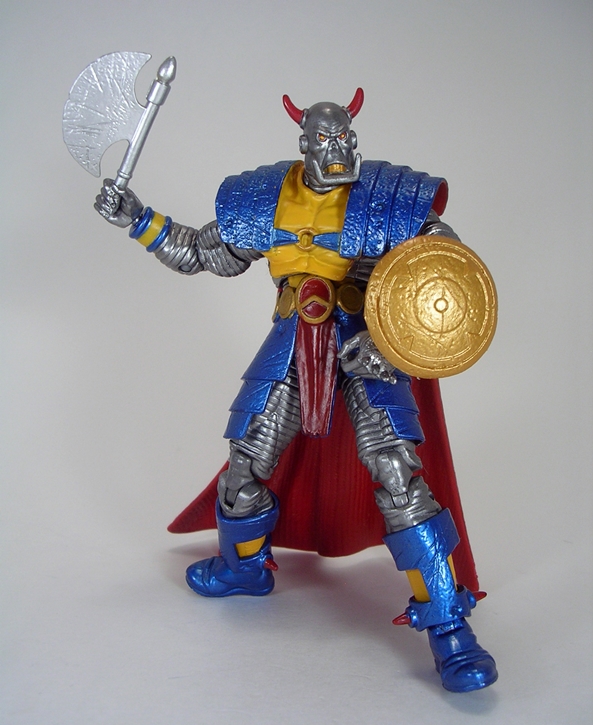 Death’s Head comes with a few accessories to aid him on his bounty hunting. You get a classical spiked mace and a short handled axe. Both pieces are cast in metallic silver and the axe has some great weathering in the sculpt to show that Death’s Head gets a lot of mileage out of his weapons. You also get a small bronze colored target shield that can clip onto either of his wrists. The shield can also be clipped onto his back and there are slots on the shield to hold both his weapons. 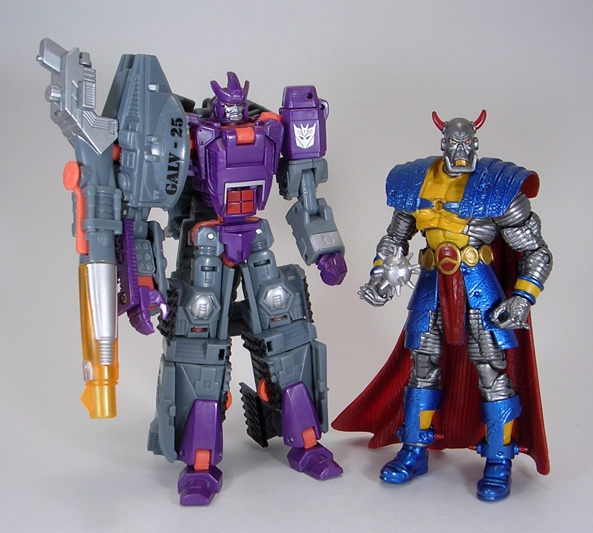 Normally I would say that Death’s Head’s obscurity as a character, at least in the US, is going to restrict the appeal of this figure to only a small number of collectors out there. On the other hand, his quirky character designed coupled with the wonderful job Hasbro did on the figure have me reconsidering that. It’s hard for me to imagine that many Marvel Universe collectors are going to see this beauty on the pegs and dismiss him just because they aren’t familiar with who he is. I know I’d pick up this figure even if I had no history with the character at all. Possibly the only sad thing here is that even with two scales of Doctor Who figures out there, Death’s Head isn’t compatible with either of them. That’s OK, though. I think he fits in OK with the Classics and Generation line of Transformers, and that’s probably where I’m going to display him.