The last time I looked at the Cover Girls statues was way back in January and it was that sumptuous she-bot from the Metal Men, Platinum. Today we’re looking at Supergirl! Supergirl is one of a handful of lower priority DC books that I’m catching as they come out in trade paperback collections. I think it started on a high note, dropped off for a bit, and lately it’s starting to pick up again. It’s not great, but I still enjoy reading it. This is a statue that I had on pre-order way back when it was first revealed, but she got bumped for other things more important to me. Ever since then I’ve been keeping an eye on her and it took me until now to finally fit her into the budget. 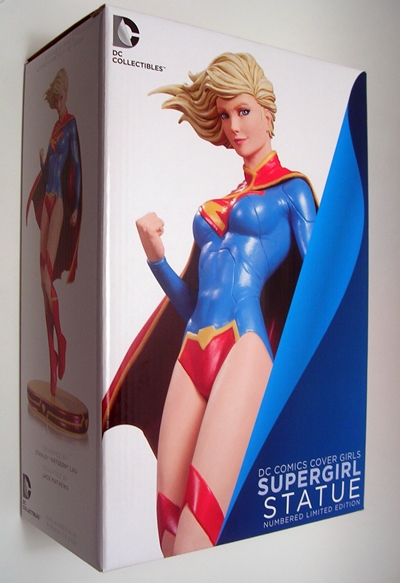 The packaging is right in line with what we’ve been seeing from the Cover Girls ever since DC Direct became DC Collectibles. It’s a fully enclosed white box with some shots of the statue to show you what you’re getting inside. As far as presentation goes, this is about as utilitarian as it can get. Call me crazy, but I expect something a little more exciting and colorful out of my comic book collectible packages. 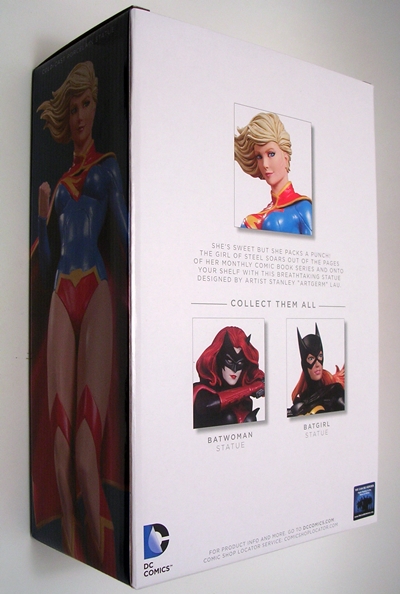 The back panel of the box shows off two other statues in the line, Batgirl and Batwoman, both of which look pretty good. The statue resides between two styrofoam trays and wrapped in plastic. So far, each of the Cover Girl statues I own have come ready for display, but Supergirl needs to be pegged into her stand. The peg is sturdy metal piece, which fits in easily and holds the statue securely. The reason for the support rod has everything to do with the composition of the piece, so let’s start there.

The pose here is supposed to be Supergirl levitating and I think it’s a great look for the statue. She has just the toe of her right boot touching the base, making it look like she’s coming in for a landing. I suppose if you want to ignore the base, she could just be suspended in mid-air. Kara is striking a pose with both hands curled into fists and flexing with her right arm. I think this is the first statue in the line since its relaunch that has a character capable of flight and I’m happy to see they showcased it in pose. The composition is completed with windblown cape and hair. 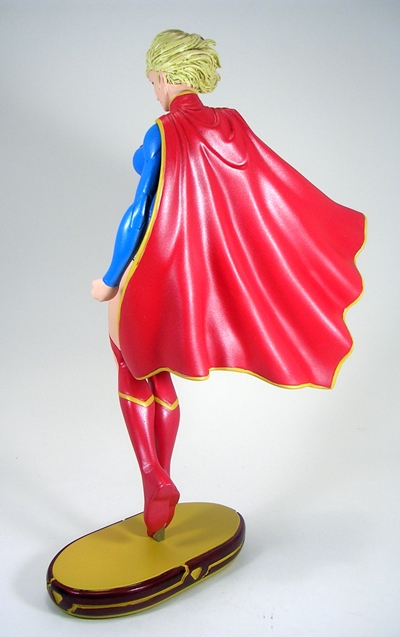 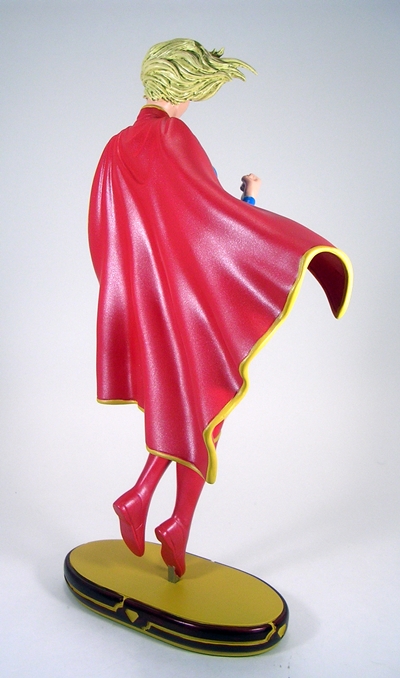 The sculpting here is certainly a solid effort. All the painted aspects of her costume are also part of the sculpt, which works well to accentuate the New 52 style. Overall, I don’t have any problems with Supergirl’s current look, although I’ll concede the idea behind the cutout knees in the boots is rather perplexing. The portrait is clean and simple. Kara has just a wee bit of a smirk, which lends some whimsical personality to the piece. 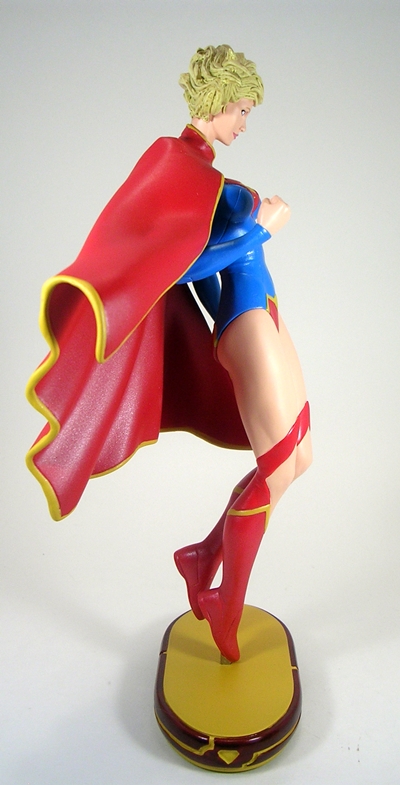 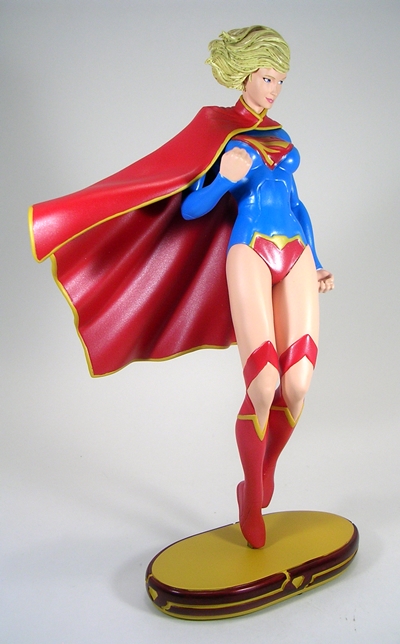 The paintwork has been hit or miss on this line. All of my Cover Girl statues have been acceptable, but there have certainly been opportunities for improvement. I think Supergirl reflects that same trend. The paint on the costume is overall excellent. The lines are fairly clean and the glossy paint used on her one-piece contrasts nicely with the slightly more matte finish on her boots and cape. The skin tone is nice and even and the paint on her face is clean. I’m not a big fan of the wash they used on her hair. It’s there to give it more depth, but I think it just makes it look a little dirty. Really, the only other gripe I have with the paint is that the brush strokes on the base are a little too apparent. So, all in all, not bad.

While the first releases in the rebooted Cover Girls line were environmental designs, DCC seems to be moving more toward a standard oval base for the current releases and while I hate when lines like this change styles in mid stream, I still think it was a wise move. Technically, these are still limited pieces, but with a run of 5200 pieces (I see what you did there!), the limitation isn’t too stringent. I’ve also noticed that DCC has been reissuing a few of the earlier releases (or at least they are for Harley Quinn), so I’m not sure how they work that into the limitation. The statue is numbered on the bottom of the base. 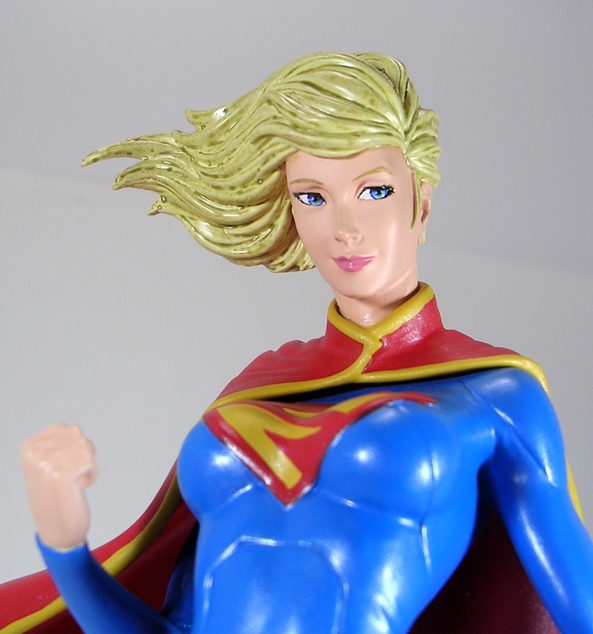 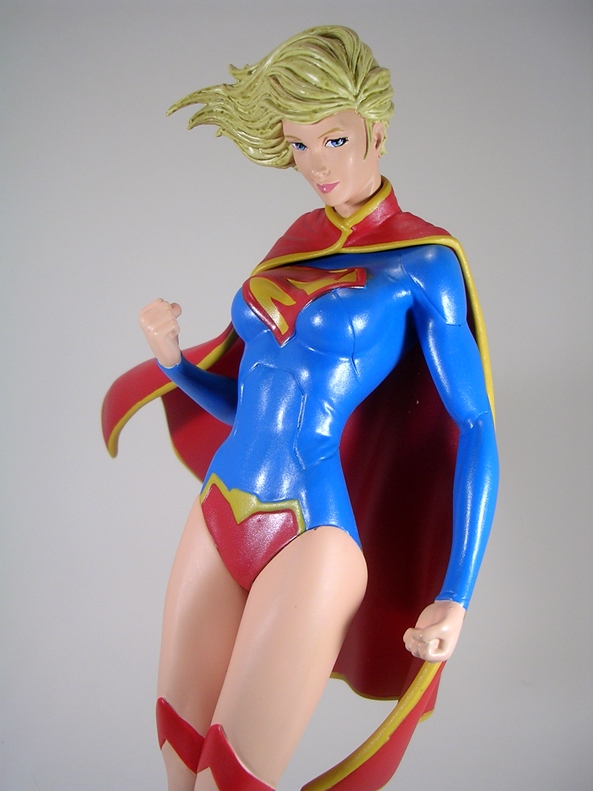 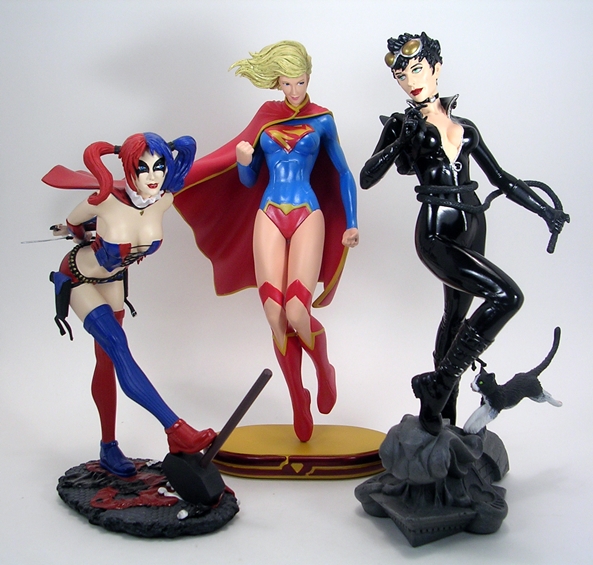 In the end, I’m glad I finally got around to adding Kara to my Cover Girls collection. She’s a great representation of the character and overall feels like a fairly solid value for the money. While this rebooted Cover Girls line continues to have its critics, I remain a fan, albeit a rather tepid one. These aren’t something that I often pre-order like I do most of Kotobukiya’s stuff, but then I tend to like the PCV format over this cold-cast porcelain for my statues. Nonetheless, at roughly 1:8 scale and around $80 each, these statues fall right into my sweet spot and keep me coming back for more.

One comment on “Cover Girls of the DC Universe: Supergirl by DC Collectibles”